I’ve had quite a beer soaked week so far. It is the Great British Beer Festival this week. This was preceded by my first ever British Beer Writers Guild event, their summer party. I couldn’t miss my first opportunity to meet some new people and try some interesting beers! The Boy and I dutifully packed up and headed to That London for a couple of days. 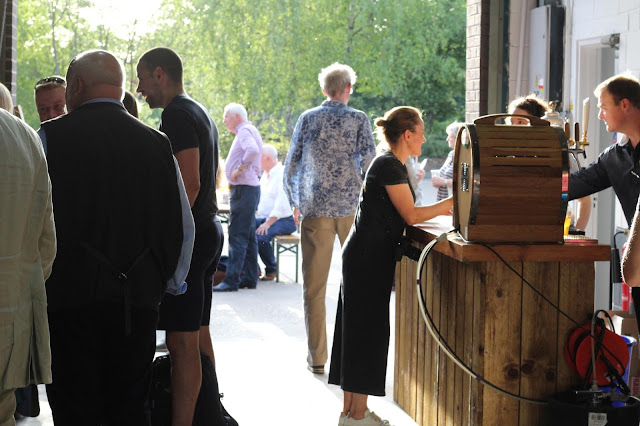 
It was a blisteringly hot Monday evening in Brixton as I ambled down Milkwood Road, towards the new home of the Brixton Brewery. They only began full scale brewing at this behemoth new brewhouse two months ago. This expansion is thanks to a tie in with Heineken and has more than doubled their capacity. They also have some serious potential for future expansion. There is also a new canning line. This has made them into one of London’s biggest craft breweries almost overnight.

I was rather nervous to meet such an illustrious bunch of writers, journalists and beer industry bigwigs. However I was immediately put at my ease by secretary Ros. A beer was put in my hand by the cheery Brixton team. A good start! It was a very convivial environment with lots of sharing of beers, light hearted banter as well as some seriously interesting beer related chat. In fact, I can say I enjoyed it more than the beer festival the next day!

Good job we were sharing as I was started with an Atlantic APA from Brixton. At 5.4% it just tips over what I consider to be a sessionable ale! From the sample I enjoyed though, I really got the burst of tropical fruit flavours – this packs a lot of flavour punch. I liked the condition that the can presented to the drinker too and of course their artwork is eye catching, but cannot be taken as an indicator of quality! Safe to say I will be keeping an eye out for more of their beers in the future though. Given their expansion I’m sure that this will become easier here in the Midlands with the might of the Heineken distribution engine behind them. 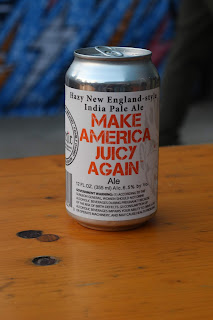 I had two real highlights from that evening though – the first of which was Heretic Brewing Company’s Make America Juicy Again New England IPA. More on that anon, because it deserves consideration on its own. The second was a real heavyweight – the Lickinghole Creek Craft Brewery’s Enlightened Despot. This Russian Imperial stout weighs in at 11.3% ABV and all of us who shared a taste of the bottle agreed that while it had incredible body and texture, there was still a slightly green element to the flavour that felt a little raw and suggested a few years in the bottle would be of benefit. That said I was rather taken with its deep cacao flavours and just a hint of coffee, blended with the rough and ready flavours of the Pappy Van Winkle bourbon barrels in which it is aged. You can taste the oak and the smoke, just like a good bourbon. 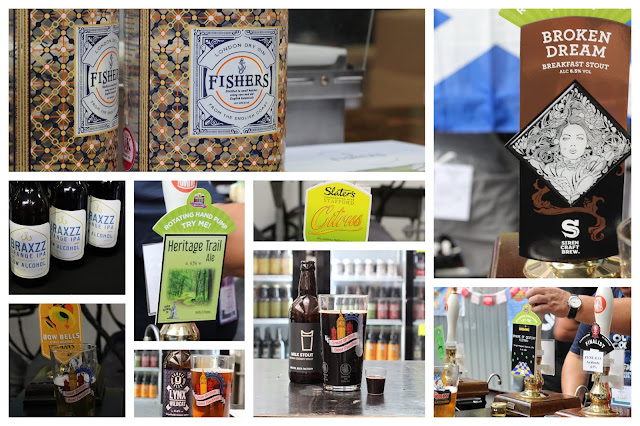 The next day, it was on to another beer adventure in the form of the trade session of CAMRA’s Great British Beer Festival. With over 900 festival ales on offer, you really are spoiled for choice, so my tried and tested technique of ‘wander round until something catches your eye’ really came into play. The wildcard approach to beer festivals really is the best. 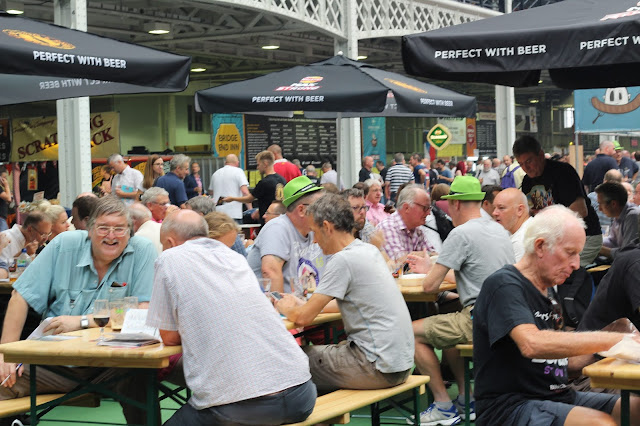 As it went, the first two halves I tried were deeply dull – the Truman’s Bow Bells and Slater’s Citrus both lacking in flavour, interest and complexity. However as usual once I moved to the dark side things immediately got more interesting. I adored the smooth texture of the Bristol Beer Factory’s Milk Stout, obtained from the Bottle Conditioned Bar, although it transpired that being given a shot glass in case I fancied tasting the sediment was a little pointless as I couldn’t spy any at all! It was a malty, thick and rich stout with overtones of hot cocoa and burnt coffee and a very slight petillance from the conditioning. I will certainly return to that if I see it again. The Boy opted for the Lynx Wildcat from Yeovil and was also very pleased with his choice. 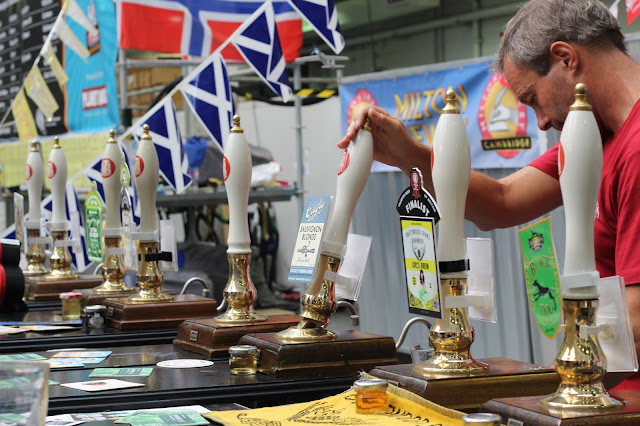 For our next tipple I found myself in the vicinity of the Siren Brewery and as a confirmed fan couldn’t resist taking a squizz at their wares. Turned out they were showing the Broken Dream Breakfast Stout and at the very moment I was ordering my half to try, it was being awarded the CAMRA Champion Beer of Britain over on the main stage! This either demonstrates my incredible taste and knowledge, or just makes me prone to overthinking coincidence. I’ll leave that one with you. Meanwhile The Boy took a punt on the Sauvignon Blonde, a golden ale from Crafty Beers. Had we had more time available I would have gone back for a half of that myself! We were both blown away by the genuine similarity to an Old World sauvignon blanc in both the aroma and the flavour. Plus it still had a strong malt backbone. They really took their vinous inspiration and ran with it. 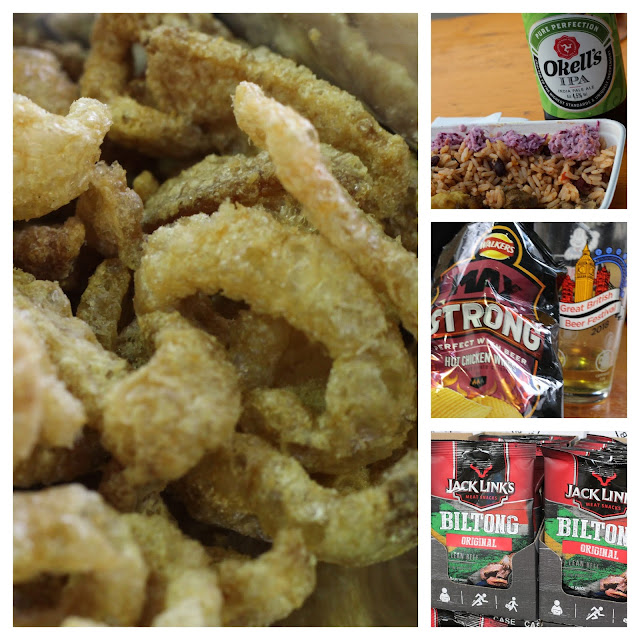 As well as the beers there was also a huge variety of snacks on offer and traditional pub entertainments to keep everyone occupied. Punters played beer pong in exchange for free bags o pig snacks (that’s scratchings if you’re not sure). The merry sound of table skittles being thwacked by cheeses rang out. We also noticed a very neglected game of Cornhole which we first encountered in California a decade ago.  I have never seen it in the UK before and judging by the way it was being ignored, neither had anyone else! 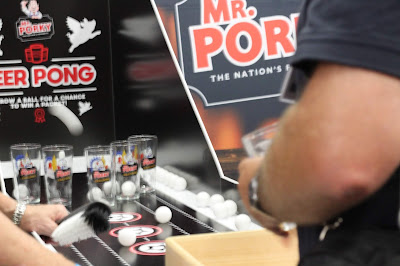 Given the rise in fascinating, aromatic and delicately flavoured craft beer in this country, I have to say that generally speaking the snack offering was relatively predictable for a beer festival. Sausage rolls, pork pies (not from Melton though…) and pork scratchings were the main order of the day. There were a few more interesting vendors like oriental dumplings and such. However, I’d love to see much more street food collaboration in the future. Even if vendors offer real food with suggested food pairings, that would be a great start. But even more fun would be paired menus developed between breweries and food producers. Perhaps that’s just something that appeals to me beyond the more traditional beer festival offering though. 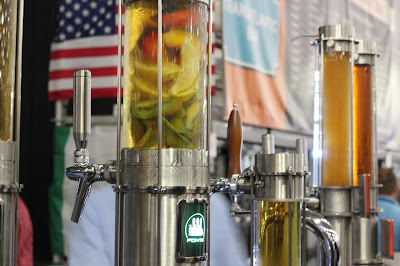 Well! A very inspirational couple of days all in all. There is plenty more material for future posts for me to share with you. The ideas that were planted in my brain will take root over the weeks to come. There are another three days left for you to enjoy the GBBF if you find yourself down London way.

And I leave you with a photo that will be cryptic to many. Some of you will appreciate why I took a photo of this card when I managed to get it at the UK’s biggest beer festival! And yes, it was as creased as the Leicester one. 😂 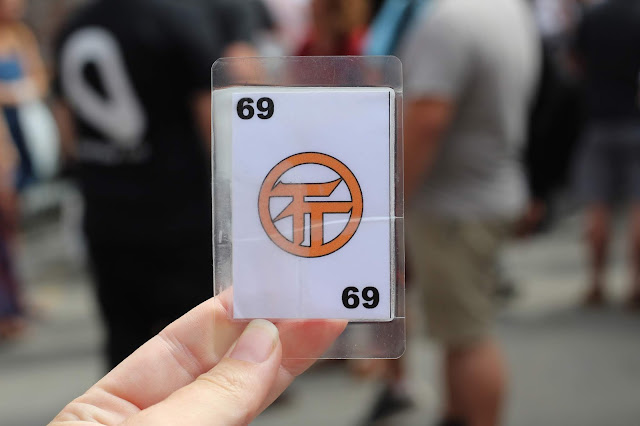