Finally, there’s a new Greek in town! We’ve suffered a dearth of Greek food in Leicester city centre for many years now, sadly. It is one of the few cuisines that we lack and, typically, one of my very favourite.

So it was with much anticipation that I paid my first visit to The Olive, newly opened on Belvoir Street in the city centre. It is a simply decorated, medium sized eatery boasting a simple, modestly sized but hugely tempting menu of Greek street food.

I would in fact say that the menu is ‘carefully curated’ rather than small as it took me an extremely long time to decide what to choose from the menu. It all sounds delicious and I will certainly be returning. However, in the end I decided to plump for the classic Souvlaki – start with the basics and then work from there. 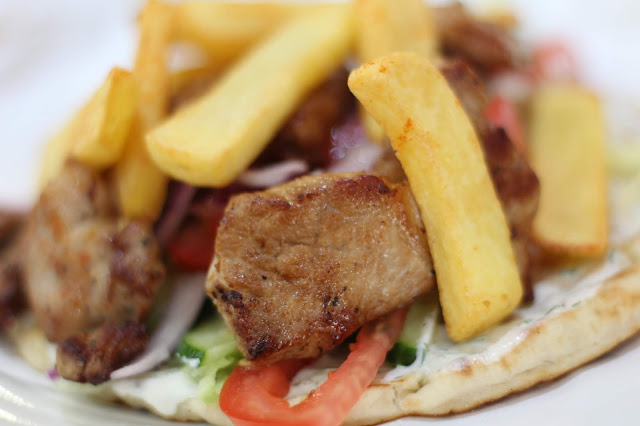 The food is delivered with a smile and relatively quickly – it is clearly cooked to order. My pork souvlaki was served wrapped in a paper, but I think that eating it on the go would be nigh on impossible. This thing is fully loaded. The fluffy white flatbread is topped with a thick smear of creamy homemade tzatziki and sprinkled with a very generous layer of salad. On top of that comes the marinated meat skewer. In my case this was succulent pork, with the added interest of a flavourful marinade, sprinkle of lemon juice and light char on the edges. This in turn is topped with a small handful of fat chips. It’s a beautiful combination of flavours and textures – crisp and smooth, creamy and sharp, crunchy and soft.

Like all classics it is the simplicity that makes it so good. You can order the Souvlaki with a range of fillings – as well as pork try lamb, kofta, halloumi, chicken or mushrooms. Prices start at £3.95 for the vegetarian fillings and it is well worth it. This is a filling, satisfying dish. 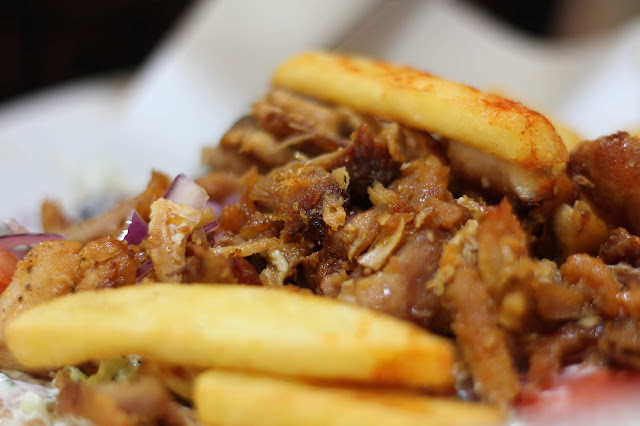 Sadly we had no time to sample the baklava, which stared out at me, tempting behind the glass dessert counter. However there are so many reasons that I want to go back and take another shot at The Olive. What does their moussaka taste like? How good is their calamari, their halloumi fries? I’m also a sucker for Spanakopita, the spinach and feta filled filo pastry delight. And as readers of my previous posts will know, I love mezze. So I have about a hundred reasons to go back. There just aren’t enough meals in the day, are there? 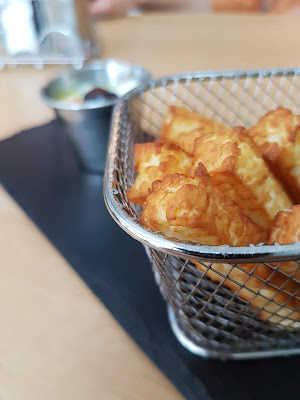 As promised I did go back to try some more of the menu. This time I went for the keftedes – in all honest they were a little on the dry side, but it was still one helluva meal. We also tried out the halloumi fries, which are £2.45 well spent! 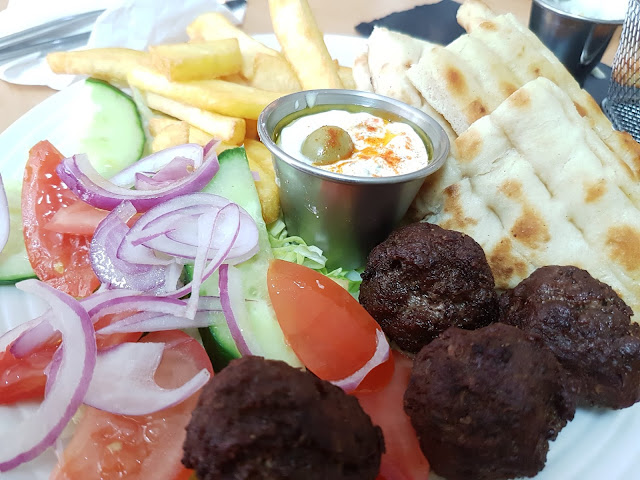 The Olive did not know I was going to write up my visit(s) and we paid for our meals in full.