As I’ve been spending more time around Sawley, I’ve been desperate to try the tapas restaurant Esquina, but am usually in the area around weekday lunchtimes where they are closed. So when I found myself practically tripping over the venue on a Saturday early evening I could not resist calling in to give their Spanish menu a spin.

We entered the surprisingly empty restaurant and received a friendly welcome from the bartender who served our drinks and seated us efficiently. The drinks selection is not particularly inspiring, but all the usuals are there, so you’re bound to have an old favourite to fall back on.

We perused the menu and were a little surprised by some of the options! The restaurant has been open for nearly a year, having been converted from a British traditional restaurant. This influence still shows through with items like pulled pork sliders on the menu, and ‘meatballs’ instead of the more familiar ‘albondigas’ that you would associate with a typical Spanish restaurant. I have no doubt that having been in business for over 2 decades, the owner has his reasons for keeping a more English take on the Spanish classics!

We were warned that they were fully booked for the evening so could only have our table for 2 hours, but this was no problem for us as we weren’t planning on a lingering meal, but I appreciated them letting us know that in advance. 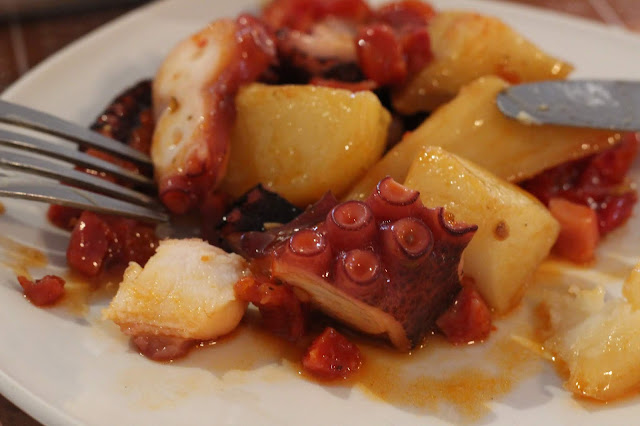 We placed our order and waited. And waited a bit more. And waited a bit more. This was a bit confusing as we had not ordered a huge amount of food, and were one of just a handful of occupied tables in the place. Fortunately, we were sat near to the window looking into the kitchen, and could see that the kitchen team were significantly more occupied drinking what looked like tasty mojitos rather than cooking, which explained the delay.

After all while though, our food began to arrive. Each dish is brought out as it is cooked which is a nice assurance that the food is made fresh to order. We had the serrano ham and manchego croquettes which were formed into two large balls. I think I would have preferred a larger number of the more traditional long croquettes as the texture balance was a little bit off. I do love a crispy coating. However, the filling was flavourful and I really liked the powerful salty meat hit from the ham. 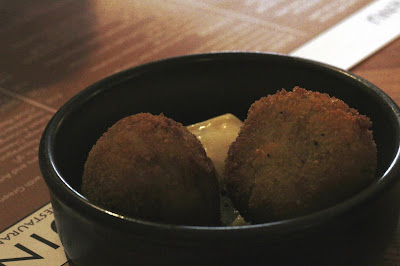 Next up were pork and thyme meatballs with tomato and garlic. Albondigas is our go to dish when in Spain, so we were looking forward to this one, however I have to say we were bitterly disappointed. The meatballs were just that – formed balls of pork mince – with no discernible seasoning, or indeed the benefit of caramelisation from the cooking. They were splashed with an unremarkable tomato sauce, which was not the rich, velvety slow cooked delight we were hoping for, but tasted rather more like chopped tomatoes that had been warmed up. Sadly, this meant that the sauce was a little raw and one dimensional. We would have asked to swap this dish out we were so disappointed with it, but as we received no checkback and there were no members of staff watching the floor this wasn’t possible. 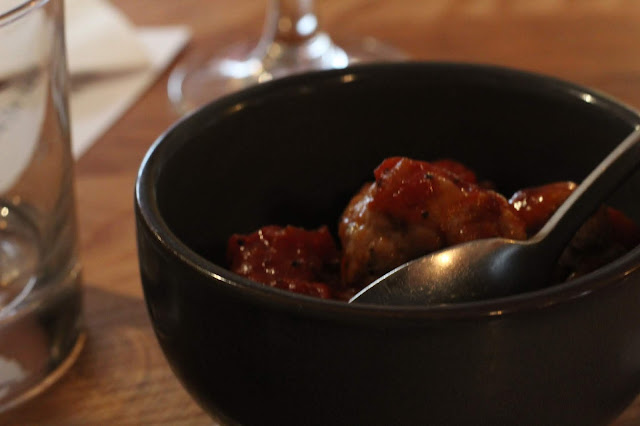 Anyway, on to better things and the octopus dish we had was more enjoyable. It was served with some tiny cubes of chorizo, which was surprisingly bland, along with tomatoes and potatoes. The menu billed chilli oil as well, but again I did not get the punchy Spanish flavours I was expecting – perhaps another effect of the Anglicization of the menu? Despite that, I found the octopus to be well handled – retaining a little bite, but generally tender and plentiful in the dish. A relative highlight. 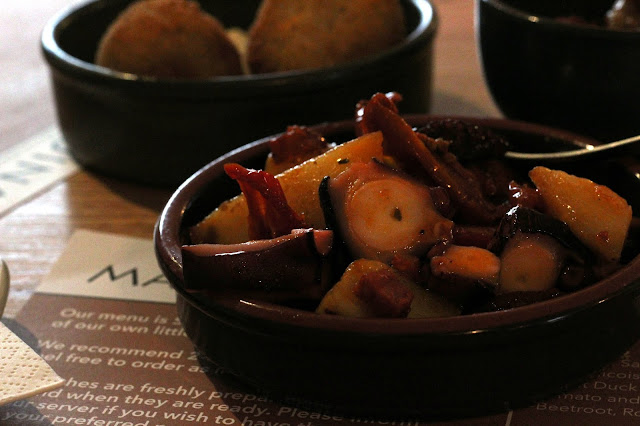 Finally we had opted for chicken pinchos, which had the surprising addition of green pesto. Despite reading this on the menu, we had chosen to go for it because we love pesto, even though it’s probably one of the least Spanish things I can imagine! 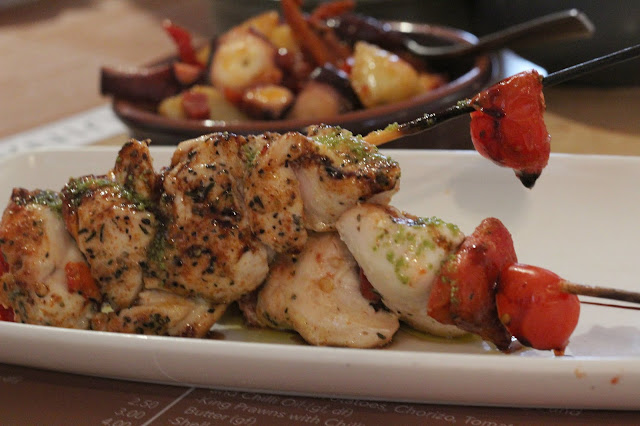 Again, the billed ‘spicing’ of the chicken skewers turned out to be rather hyperbolic, with the pesto sauce being the only real element of seasoning for my money. However, the chicken had been carefully handled and was still moist on the skewers.

So a mixed bag here. The chronic lack of flavour was something of a let down for me, and all the more surprising as the more difficult elements to get right (i.e. the octopus) were nicely done. The meatballs were a total waste of time – although to the credit of our waitress when we bemoaned this (and the absence of a checkback) at the end of the meal she immediately went and took it off the bill. This was a nice touch on her part, but does make me wonder whether that is a common occurrence…

Pricewise, dishes were around £4 to £8, with most of what we ordered falling to the top end of this. They recommend 3 dishes per person, but I would suggest that four would be required for a decent meal, particularly given the absence of complimentary bread (which always gets my goat in this country). So slightly more expensive than a chain tapas restaurant, but with the same middling quality of ingredients and execution. I shan’t be rushing back, but it wasn’t terrible.

Esquina did not know I was going to write up my visit and we paid for our meal in full.
Except for the meatballs, which were taken off the bill.