There is only one thing that happens in March around these parts, and that is the beer festival. Here’s what I thought about last year.

In January we all recover from Christmas and complain how cold and dark it is. In February, the comedy festival coaxes us out and gets us in fine spirits, so that by March we are ready to get our festival on. And Leicester CAMRA are always more than happy to oblige. 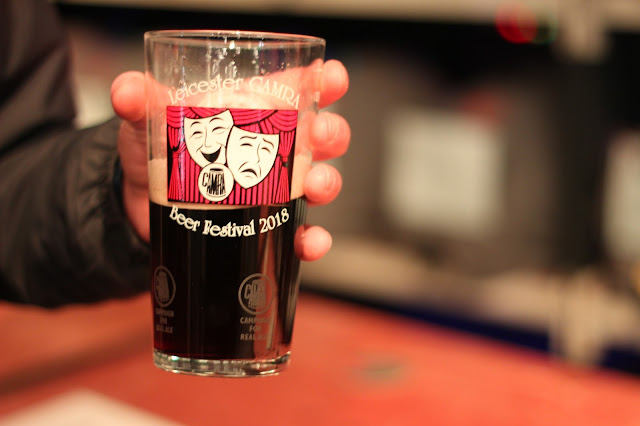 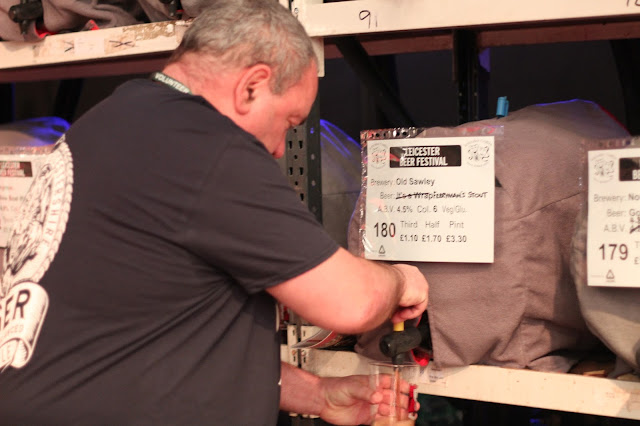 Strewn around the perimeter of what I understand to be the biggest stage in Europe were the 260 cask beers (not to mention the ciders and perries, keykeg bar and European bottled beer bar.) We grabbed our festival glasses, with topical theatrical mask logo, and off we went on a voyage of discovery. 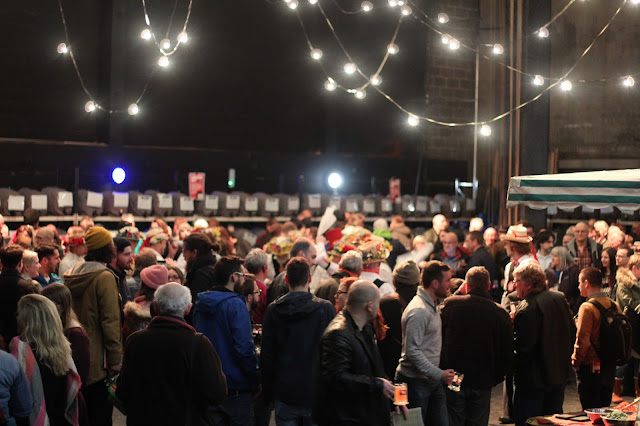 Sadly, the voyage of discovery led us almost immediately into the path of some Morris dancers, who stopped us, and everyone around us, from being able to adequately negotiate the stage to get to the delicious beer, but I’m sure someone in the room must have enjoyed them. 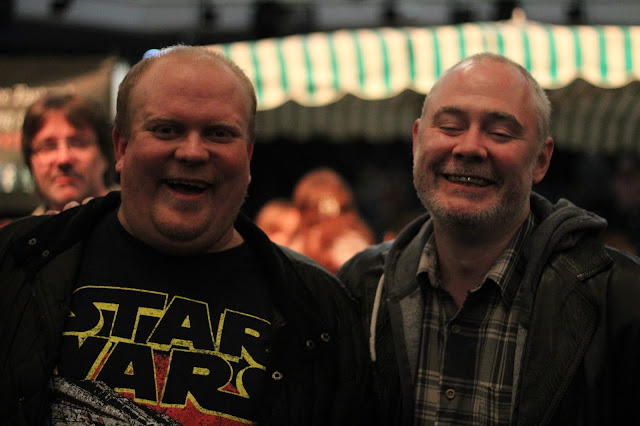 Having ducked around the sea of waving handkerchiefs and general bonhomie, we were able to get to the casks – as well as finding a couple of publicans who were unable to behave appropriately for a decent quality picture to be taken of them (above). Occupational hazard at a beer festival that is.

I enjoyed a couple of halves from some of my favourite local brewers and good friends – in particular raising a glass of the deep and mysterious chestnut ale Storm from Old Sawley, whose namesake pub dog had sadly passed away that morning, as well as enjoying the festival brew Show Stopper by my nearest home brewery, Anstey Ales. This is a perky golden ale with citrus notes running through it – vibrant and easy to drink. 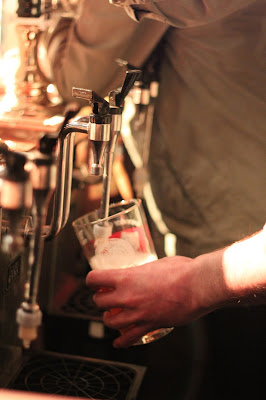 Of course half of the fun of a beer festival is going rogue and just wandering round until you see a beer that you fancy trying. It’s never a problem to have a taste to make sure you like it before committing your precious beer tokens. I took a punt on a pint of Boozey Muses from Elliswood Brewery – a tasty pale with a strong ABV backbone and hop heavy finish – and the Dark Ruby by the Sarah Hughes Brewery – a mild with a really interesting finish that I couldn’t quite put my finger on. 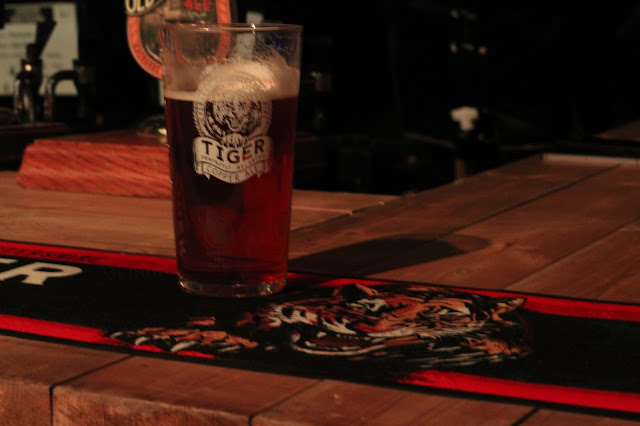 The Keg stand called to me as well and after a disastrous taste of Cloudwater’s Small Nelson Sauvin Rye Pale (hated it – think Nelson Sauvin hop with rye combination is just too out there for my taste) I enjoyed a delicious third of the ever-so-satisfying Magic Rock Common Grounds coffee porter. I loved the texture of this humdinging dark ale.

After all that excitement it was time to pop across to see friends of the blog and main festival sponsors, Everards. They were presented their latest seasonal brew, Patriot, which I found to have a surprisingly robust flavour in my tasting sample. 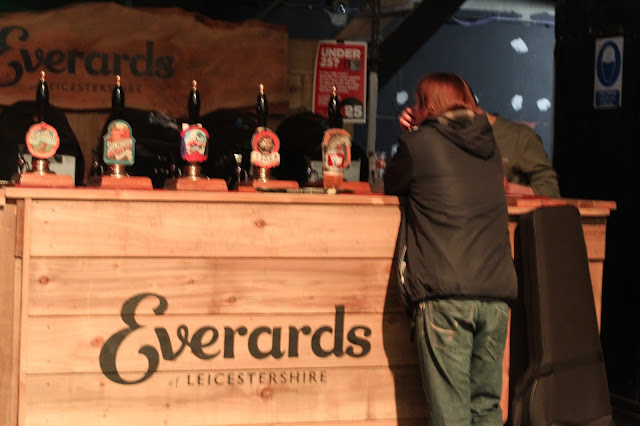 After all the excitement I decided to treat myself to an old favourite, so it was off to the Tiny Rebel casks where I rounded off the day with a Stay Puft. Yes, it’s predictable, but it is delicious. Great mouthfeel, predictable and consistent quality and enough sweetness to make this a superb beer festival ‘dessert’ to end the day – how can you resist a marshmallow porter of this quality?

So as you can tell I approached the whole thing with no plan and not even any rational order of styles in mind for my tasting. You can do this too, or you can plan the whole thing out with military precision, if you have a magnifying glass in order to be able to read the teeny tiny writing in the programme. I do enjoy seeing the people who plan their manouvre, ticking the beers off as they sample.

The only real problem we experienced on the day was the coloured lighting in the theatre meaning you had absolutely no idea what your beer *actually* looked like, but I’ve heard a rumour that this was sorted out later in the week. 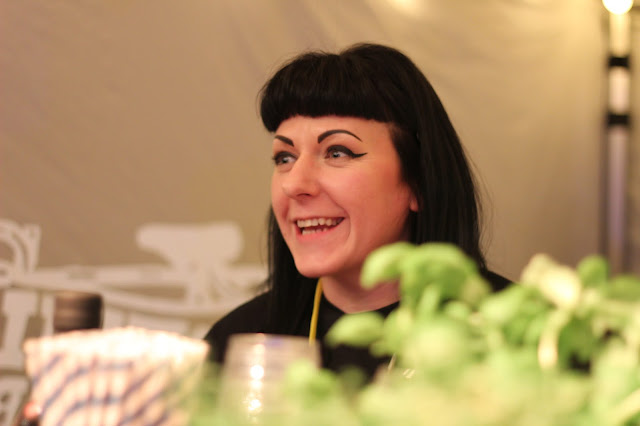 For those who wanted a break from the beer, there were of course the magnificent Travelling Juniper Berries, bringing their own selection of 50 gins each with its own bespoke garnish (and even teenier writing in the festival programme). You could also head to the CAMRA stand for a general chinwag, the opportunity to join CAMRA (which you can always do online too) and to pick up one of the bottled European beers on offer. There were also a range of charity fundraising opportunities, merch stand and the like to keep you entertained.

In honour of National Pie Week, we also indulged in a Gamble & Hollis pork pie, topped with black pudding. Which really are some of the best pies you can eat, here in the most pork pie based of all the counties. As is traditional, there were also a range of authentic curries on offer along with a selection of Indian snacks to help soak up all of the beer. This year there was also a stand in the main beer festival offering a range of snacks like olives and the like. For some reason they had a giant parasol, even though they were indoors, which literally ruined every panaromic photo I tried to take of the festival, and made everything look a bit like a marketplace. But there you go. 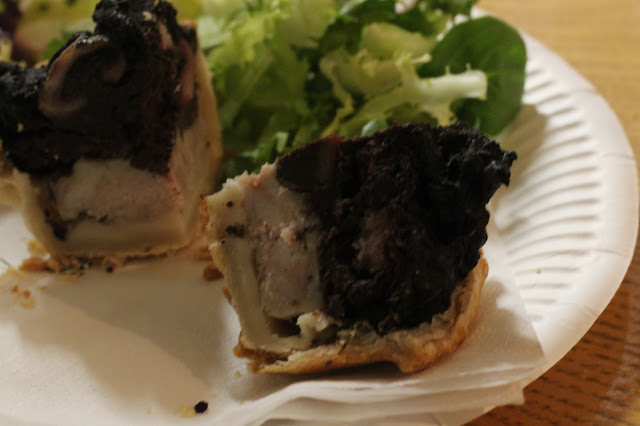 So, if you didn’t make it you now have another year to wait. But never fear – we are a city not short on beer festivals. My big pick coming up is the pre-cursor to the Western Park Beer Festival, the Pop-up Pub, which is conveniently this Friday (16th March 2018). Six casks, six kegs, cider and whatnot all in the good name of charity. An excellent run-up if you haven’t given a beer festival a go before. And pizza!