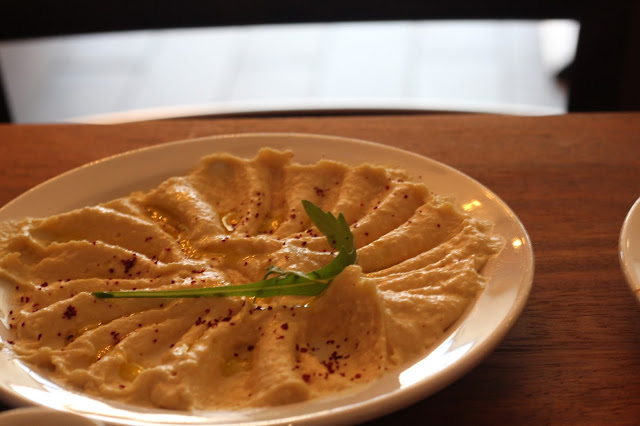 Now, right on that foodie corner, Antalya has finally re-opened. I’m not sure if the long closure period saw the restaurant change hands – I’d been previously and never had any complaints – but when I stopped in for lunch recently it had been taken to a whole new level.

The Antalya Turkish Kitchen’s refurbishment has left it feeling cosy and on theme, but also clean and well maintained. It is smart and stylish, with a beautiful edge of Turkish decor. I was greeted by a friendly front of house team who attended with diligence and care to my every need during my visit. The service could not be faulted, and, as you will see, certainly went the extra mile! 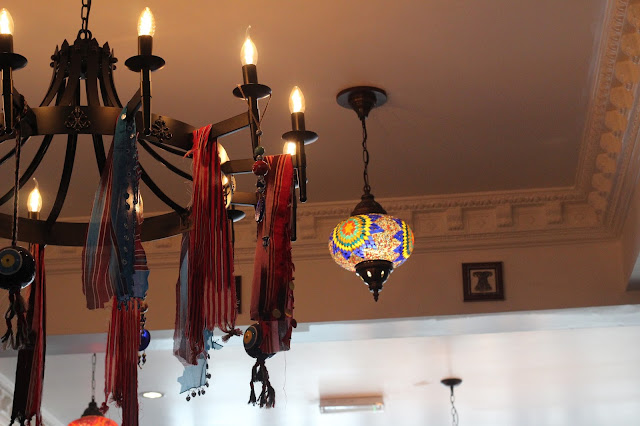 I popped in during lunch service as I was passing through the area as I’d been tipped off that the unit was trading again and I wanted to see what the score was. The lunch time deal represents astonishing value, with a cold starter, small grill and a drink for £6, the same with a large grill for £8.50 on offer. That sounded like a lot of food, so I went small. 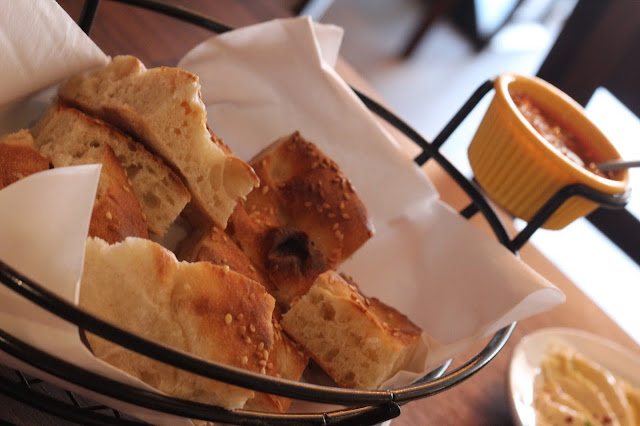 The manager came to take my order, making me feel right at home whilst dining alone. Being right in the middle of an incredibly busy day, I was not in a great place for making confident decisions, so I asked for his recommendation for a starter – should I go humus (always a great way to judge a Turkish restaurant) or the stuffed vine leaves (I know them as dolma or dolmades, but I think they were named something else on this recipe. I just love them). The manager suggested I have a little of each, since I couldn’t decide. How very accommodating, thinks I! 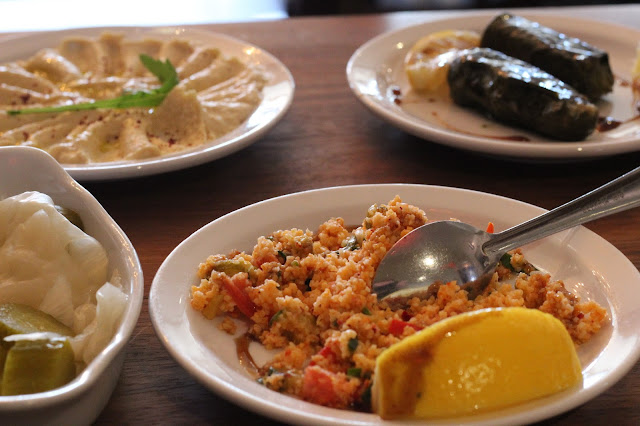 So my starter arrives, and I see no indication that I have received either a half portion of humus, or of vine leaves. And of course, I receive a basket of fresh bread – light, fluffy and still warm, with a chilli sauce and yogurt dip accompaniment. And what’s a starter without a plate of pickled vegetables and another plate of cous cous spiked with vegetables? 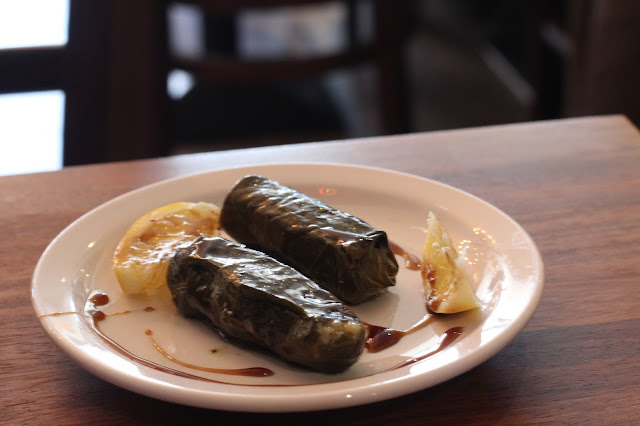 All of the food was great – the humus had just the right hint of garlic, with a decent olive oil drizzled over the top. I think I could basically have just had that and the bread and I would have been good for lunch. I loved the vine leaves and the balance of sweet and sour flavours in the cous cous. Clearly I didn’t eat it all, as while I was halfway through, my main came out, leaving me to spend the rest of the meal diving from plate to plate at my own personal Turkish buffet. 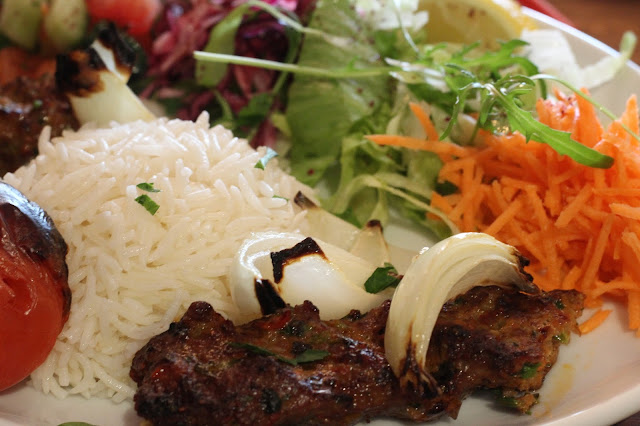 I opted for the lamb kofta and loved the spicing – it had just the right amount of chilli kick which balanced beautifully with the slight char on the edges from the grill. The main came with the grilled veg from the skewer, a mound of white rice and four salads – cucumber and tomato, red cabbage and onion, green leaves and grated carrot with a little lemon. It was all fresh and light – the perfect way to cut through the rich meat. And a helluva lot more food. 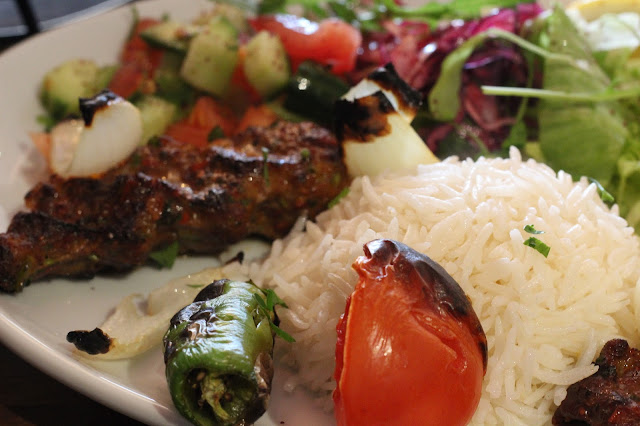 As I slipped gently into a food coma while finishing my can of pop, in full knowledge that I had to be across the city centre within half an hour for my next meeting, my plates were cleared and the waitress asked me if I would like some Turkish Tea, which I politely declined. I had managed to exercise enough self restraint that I wasn’t dying of food baby, but I was close to it. 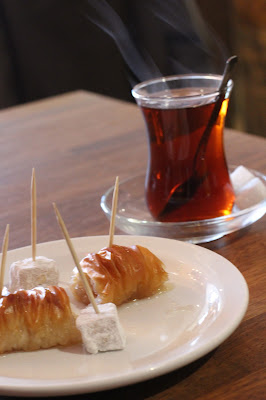 However, a couple of minutes later, she came across with a small plate of bitesize pieces of baklava and turkish delight, as well as a steaming cup of Turkish tea. I was beginning to think that I’d accidentally ordered much more food than I intended during this visit and was starting to assume that my bill was going to be at least twice what I had originally expected. 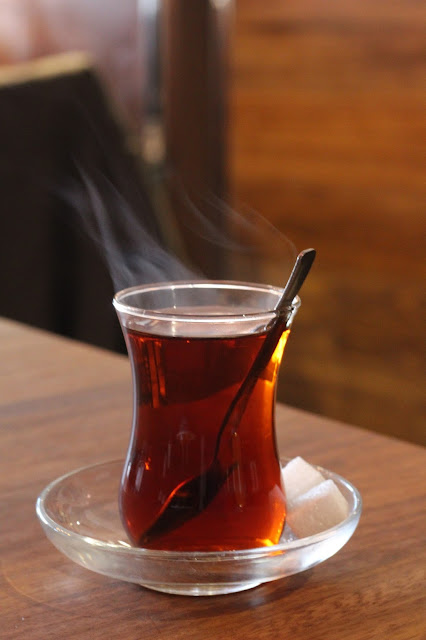 The baklava, once I’d given it a minute to allow some space to settle in my stomach, was delicious – crisp pastry soaked in honey, with a light nutty pistachio edge running through. The turkish delight was light and aromatic, with a little texture from nuts within. The Turkish tea was strong and perked me up beautifully.

So an unexpectedly awesome meal. I will be back as I want to work my way through the myriad of other grill options on the lunch menu, and try their Lahmacun (a kind of Turkish pizza) which is also available on the lunch deal. No doubt this is also a spiffing place to while away an evening eating with friends. I have no idea what might be on the wine list, so I’m also very keen to check that out next time!

So big thumbs up from me! Check it out and let me know what you think in the comments below. If you’re not a meat eater, the website suggests that you will be catered for, but I am not going to make any guesses as to what you’ll be munching on…

Antalya did not know who I was, or that I would write this meal up (neither did I until I got into it) and I paid for my meal in full. Which was still the mind bending amount of SIX WHOLE POUNDS. Wtf.