I was invited along to North Bar & Kitchen this week for their special Spanish tasting menu. A modern British restaurant, they run special themed evenings throughout the year where their Head Chef Joe creates a bespoke menu to pair with wines from a specific producer, so as you can imagine from all the Spanish wine I have blogged about in the past this was right up my street! As North rank as the #1 restaurant in Leicester on TripAdvisor, and have held the top spot for quite some time, it’s fair to say that my expectations were high. 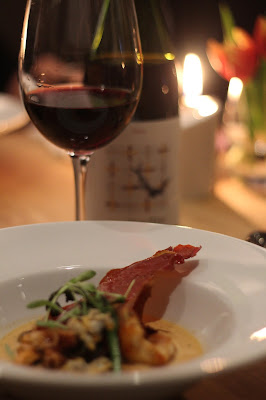 This time around, it was the North take on Spanish cuisine paired with wines from Bodega Tandem in Navarra. We were welcomed by the North team and introduced to Jose from the vineyard, who gave an explanation of his vineyard and the wines that they made in between each course – a real treat for foodies! 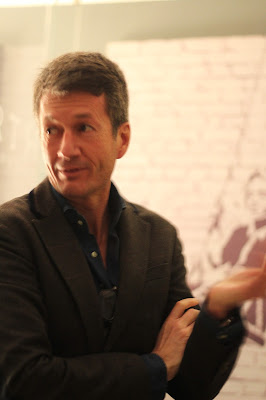 In the cosy, and neatly presented dining room we were seated and I was treated to a welcome drink of champagne – a Bernard Remy from their regular drinks menu. This was a lovely light dry champagne that followed an initial yeasty burst in the mouth with hints of lemon. A crisp way to start the evening! 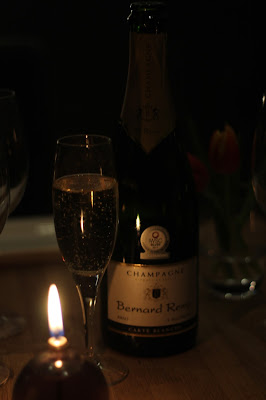 We started the meal off with a sharing platter on each table with a selection of breads and cheeses, accompanied by tortilla and olive tapanade. The homemade breads were a real triumph, each with their own distinct and clear flavour. The strong manchego cheese along the concentrated olive flavour of the tapenade made a great match with our first Tandem wine, the Inmacula (yep, the immaculate, or pure). This is the only white wine that Tandem make – predominantly Viognier, cut with a touch of Viura (or Macabeo if you prefer) – and given that these are two of my current favourite white grapes I was always going to like it!! 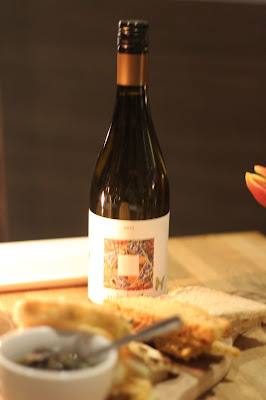 The oak aged wine had a lovely rounded flavour but balanced with a fresh acidity from the mountainous microclimate the vines enjoy. The light oaking was the element that worked so well with the bold flavours on the platter and the delicate notes of floral pear and apricot went well against the saltiness of the cheeses. I’ll admit that smoked halloumi is perhaps an odd choice for the Spanish platter, but quite frankly I’m always happy to have a bit of halloumi in my gob so I’ll let it slide. The small piece of tortilla was also delicious, although the overall flavour was much more eggy than I’m used to in Spain – I would guess that this is more testament to the freshness of the local eggs than anything, which again cannot really be seen as cause for complaint. 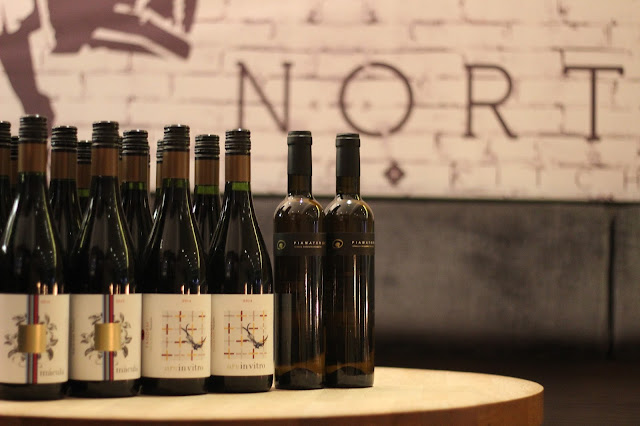 Starter gobbled, Jose gave us more information about the vineyard – his liking for the sound of Latin being the inspiration for both the vineyard and the wine’s names (with Tandem meaning finally, or ‘at last’, founded in 2002). I enjoyed hearing about the climatic conditions in the North of Navarra, and their concentration on using the minimum intervention possible in winemaking – letting gravity acting as a natural fining agent for the reds for example, and allowing the grapes longer on the vine to ripen more slowly than their near neighbours in the region because of the unique weather environment. 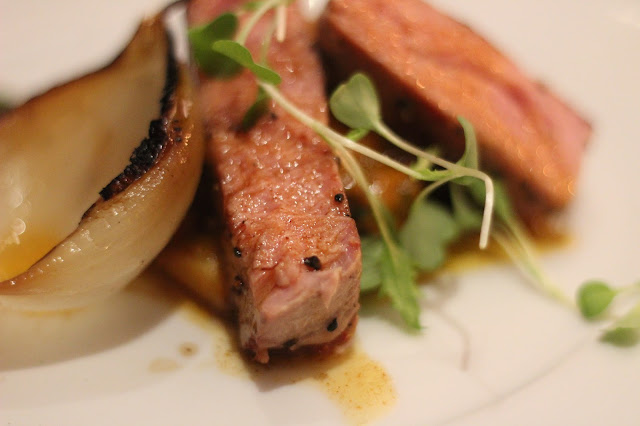 The second course was a dainty arrangement of fat fingers of seared tuna, served on a bed of patatas bravas and garnished with Roscoff onion petals. This was perhaps my favourite dish of the evening, with all of the flavours working in harmony and the Inmacula wine (as they only have one white) working in a more complementary way than opposing the dish. It was a flavourful, complex, but gently rounded experience full of unctuous textures and neat pairings of seasoning. The tuna was yielding and moist. 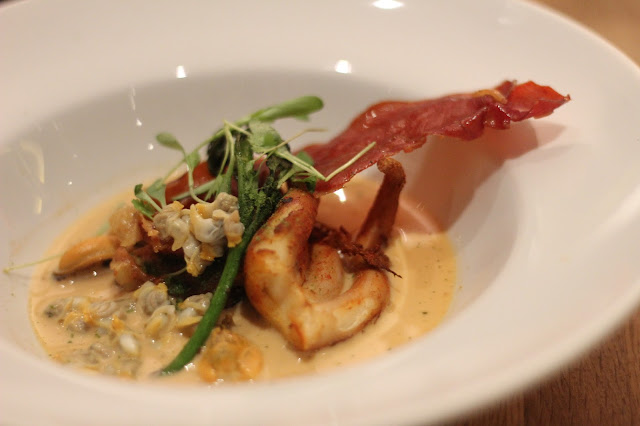 On to the red wines and the Ars in Vitro (Art in Glass) was a lively, fruity Tempranillo led wine with an enjoyable complexity of flavour that had developed in its two years in concrete tanks, which kept the fruit bright and vibrant. This was served with another fish dish, this time octopus with a crisp strip of serrano ham and served in a broth of mussels, clams and cockles. This really had the taste of Spain to it, although I think that the execution could have been improved slightly – the broth being a little on the acidic side which overshot the rich, mineral fruit of the wine by quite a considerable degree, and also the octopus being a little on the small side which meant that it was not quite as tender as I expected. Having decided to leave most of the broth, however, I felt that the dish was generally otherwise nicely balanced with the crisp pancetta adding a delicious texture and seasoning of its own without overpowering the more delicate seafood. 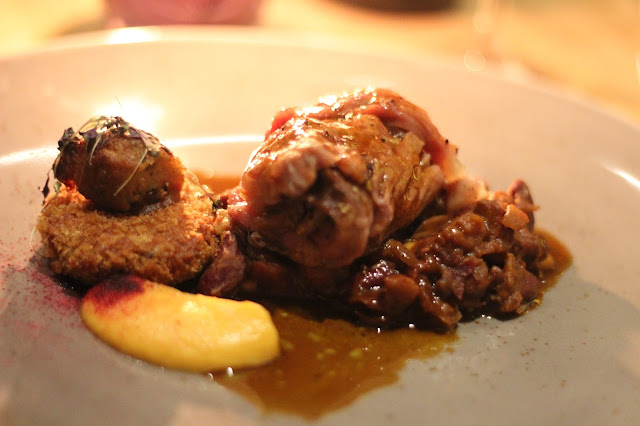 The main event was a chargrilled ribeye of local rare breed beef – an absolutely stunning cut of meat which deserved a wine every bit as robust and flavourful as itself. The Macula (as in stain, or with sin!) is an intense red, with great depth, a hint of spice and a bold minerality – once again very much up my street. A 50/50 blend of Merlot and Cabernet Sauvignon, this wine had much more of a kick than I expected, and the elements of clove and black pepper were an excellent counterpoint to the earthy bean and chorizo stew that was served with the beef. Special mention must also be given to the beef blade in panko breadcrumb which was absolutely sublime. A great dish with a really impressive pedigree of ingredients and a delicious match with the wine. 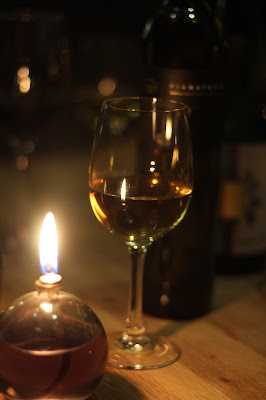 The finale was something really special (well, if you’re a bit of an amateur wine geek like myself) – the first UK showing of Tandem’s PiaMater (Sweet Mother) naturally sweet Muscat. I do love a bit of a UK exclusive I’ll be honest. This was a deliciously mouth-coating stonker of a dessert wine, grown in Tandem’s Malaga vineyard, and naturally dried to produce the sweet, concentrated flavours. The beautiful sweetness of roasted quince, floral notes and very light honey elements were a fantastic drop on their own, but also went well with the rich Creme Catalan we were served – with luxurious, velvety textures of very different types melding together to produce an opulent mouthfeel. I also liked the little chocolate dipped churros served with the dish, providing some welcome texture (as well as the crisp sugar coating on top of the creme Catalan of course). 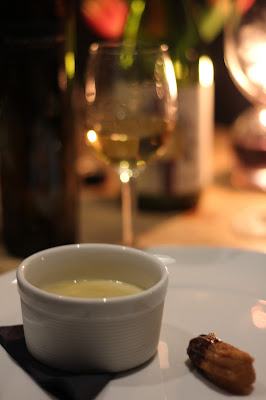 Overall then a reet decent meal! In its execution there were some elements that missed the mark slightly, but generally speaking this was one very enjoyable meal with some really dizzying highlights which far outweighed the small criticisms I had. At £69.50 per head, and considering the free flowing wine, the Tasting Menu was very reasonably priced and offered real flavour. Of course, one of the highlights was having access to Jose throughout the night, who spent the evening moving from table to table, sharing his evident passion and expertise with the guests – a real novel experience that you very rarely see in Leicester (unless you get the chance to dine with Liz from Rothley Wine of course!)

Word on the street is that the next special pairing menu will be Italian themed, and if it’s anything like as enjoyable as the Spanish night I experienced then diners will be in for a real treat.

Thanks to North who invited me along as their guest to the evening for the purposes of writing this review,
who were aware that I would be open and honest about my experience – good or bad!