Did you miss the Fine Dining Face Off I? Pop back and give it a quick read so you’re all caught up. I’ll wait. 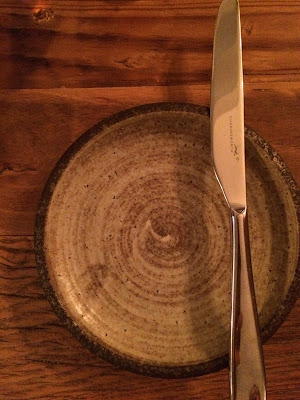 OK, so we were delighted to be the guests of Rothley Wine Estate to dinner at The Spotted Duck in Mountsorrel. Only open for 9 months, there has been a slight buzz about this restaurant, with foodies in the city being excited but nobody else even having heard of it. I’ve been keen to try the food, particularly as I basically didn’t know anything about it except that it is a fine dining restaurant and indeed, from the road it is hardly noticeable – you’d be forgiven for driving right by it. I presume this is what a lot of people do, given that our county’s only Michelin starred restaurant, John’s House, is just up the road.

Our visit in late November meant that we were ordering from the Christmas menu at 2 courses for £40 and 3 courses for £45. A more modestly priced market menu is also available on Wednesday and Thursday evenings, but didn’t go on a Wednesday or Tuesday! 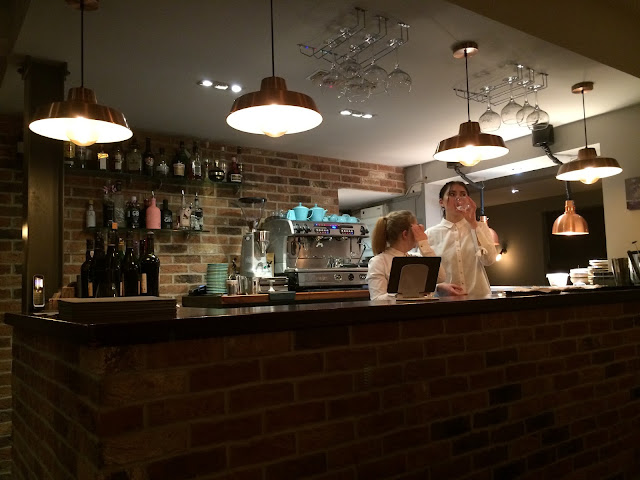 Upon arrival we were seated in a comfortable reception by the open plan kitchen and given the menus to peruse while our table was made ready. In the end we were there for about half an hour, ordering our wine and starting to drink it while we waited. I’m not sure quite why we weren’t seated as the restaurant was no more than half full during our visit. I would have preferred to sit and enjoy a pre-dinner drink at a table rather than on a sofa! It has to be noted though that in comparison to the food menu, the small but perfectly formed wine list is extremely reasonably priced -surprisingly so. You’ll pay the same per bottle at any chain pub if I’m honest, but get a lot less in the way of quality. 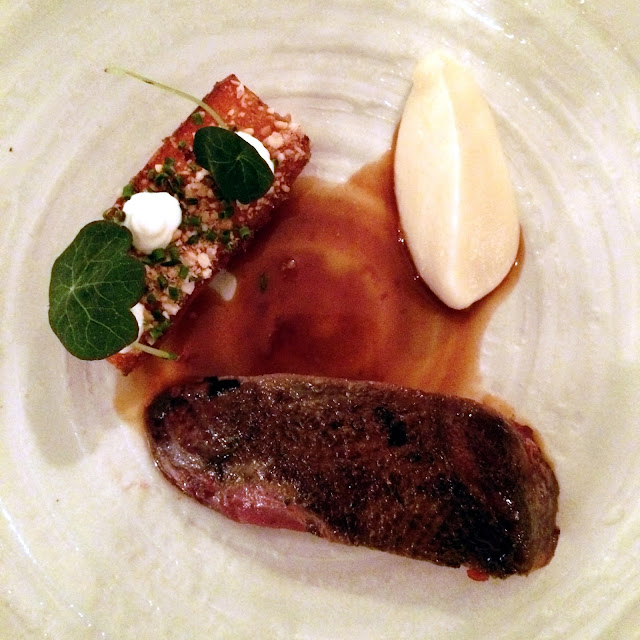 The starters were presented and everything was beautifully plated. I opted for local wood pigeon with heritage carrot and hazelnut. The pigeon was delightfully rare, however the plate that was chosen meant that it was extremely difficult to cut through the sliver of breast with its crispy skin – it just kept sliding around the plate in its own juices! I noted a waiter hovering nervously watching to check that I could cut through my own food which was kind of considerate but also a bit off putting!! However eventually I managed it and adored the game flavour in combination with the sweet carrot. 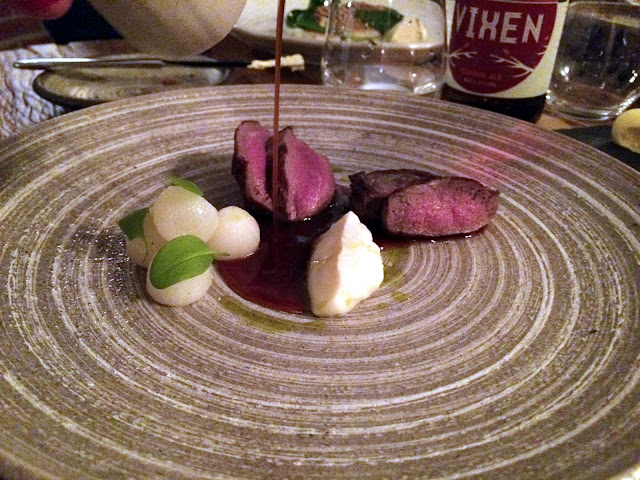 I stayed local with the main, with local venison served with turnip, and was a bit surprised that my portion looked pretty much the same as the starter. I eyed up the ample duck dish enviously and regretted my decision to avoid duck as I’d already had pigeon. However, the venison was the star of the show for the entire meal for me. Absolutely melt in the mouth and full of flavour. They seem to be a bit of a fan of a creamy quinelle at the Spotted Duck too, as every dish I saw was served with this element of indeterminate composition but lovely texture. I can’t say I was complaining. 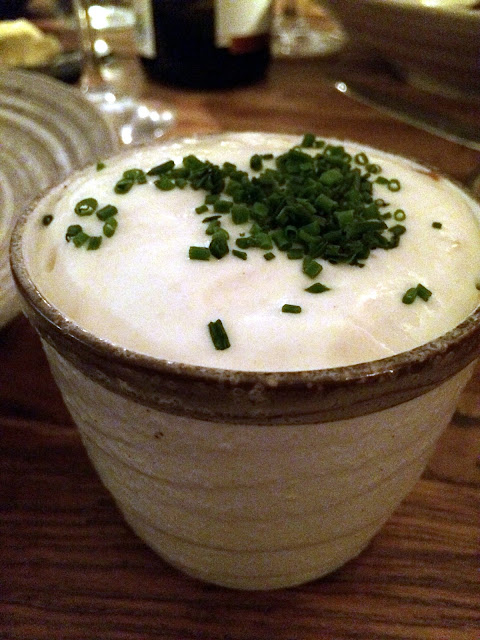 After about five minutes the final element of my dish was brought out, which I’d completely forgotten about since ordering – a smoked potato cottage pie. This again felt like the potato had been pushed through a siphon, as it was practically a froth rather than a mash, but with the layers of rich shredded venison beneath this was a welcome flavour and additional bulk which left me feeling totally full. 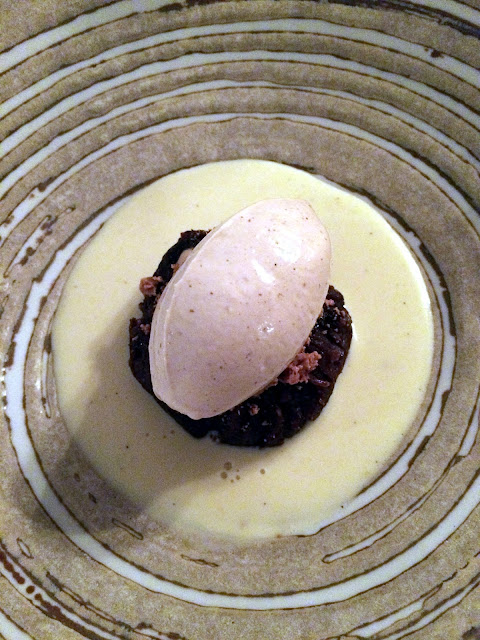 However, being full was apparently no excuse to not have pudding, and it was my first opportunity to try figgy pudding. Served with a light creme anglaise and vanilla ice cream, this was a solid portion of deliciously Christmassy stodge – full of dried fruit and a rich steamed pudding texture. It was also served with a side note of the history of the figgy pudding, although mine had been cut dangerously askew where two prints on the same piece of A4 had been cleaved asunder. This irritated the OCD element of my personality, which usually lies dormant, but obviously had no tangible impact on the quality of the food! 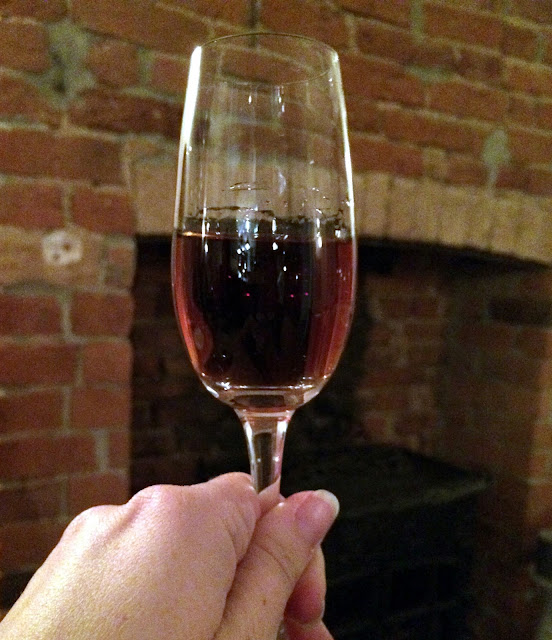 As the meal came to an end, I enjoyed a fino sherry from Lustau, full and sleepy in the cosy dining room. I ruminated that it had indeed been a fine meal.

The verdict:
Surroundings – 9/10 – once you find it, the restaurant itself is cosy, thoughtfully decorated and incredibly well laid out to enhance the atmosphere of your dining experience.
Atmosphere – 8/10 – lovely – intimate, yet with an air of quiet industry and the impression that every other table is enjoying themselves as much as you are.
Service – 7/10 – I found the waiting team to be attentive and very friendly, but was surprised that they were unable to address our questions about the menu and also to make recommendations about wine pairing with the dishes on offer (I had to make a recommendation to a fellow diner in the end!) Also bringing incomplete dishes out (the venison cottage pie being brought significantly after the service of the mains) puts them a mark down.
Food – 9/10 – An admirable selection of locally sourced dishes on offer, as well as some more exotic ingredients, which are cooked with care and almost always pushed through a siphon for some reason. Portion size was well balanced leaving you full without the risk of massive food baby at the end of three courses. Well, after the figgy pudding I was a little bit on the food baby side.
Presentation – 7/10 – dishes were generally very pleasing on the eye and while I understand their unwavering commitment to the plates that they have chosen across courses, I can’t help but feel that choosing tableware that suits the dishes and enhances the dining experience would be a small tweak that would help elevate this restaurant even further.
Fine dining credentials – 7/10 – Definitely the full package here, although I felt that they have priced themselves just a little too high. I think that I would have felt more comfortable with two courses at £35 rather than £40, although the quality of ingredients used did go some way towards justifying the price. A little more education for the team on the contents of the menu and how it fits together with the wine list would be a great way to push their fine dining reputation that bit further. Can I also be critical that when I get to a certain price point I’d quite like a neat white tablecloth on my table. I am rapidly developing an obsession for tablecloths (or more properly the absence thereof in UK dining).

47/60 – an impressive total for a generally impressive meal. We have one more challenger in the fine dining face off. How will the curved ball, Leicester College’s Taste Restaurant, fare against this tough competition?

The Spotted Duck did not know I was going to review my visit and our meals were paid for in full.