Fine Dining Face Off I: The Olive Branch, Rutland

The Boy and I have been fortunate enough to have headed out for some reet slap up meals recently, and three of them were fine dining experiences in the locality. So the logical thing was to stack them up side-by-side and see how they fared against each other! Let’s do this in alphabetical order, so I don’t have to decide what order to put them in. Keep an eye out for the next posts in this series coming soon…

We sampled the Gourmet Tasting Menu at £32.50 per person for five courses with coffee & petit fours. I was a little baffled by the espresso cup of squash soup, but shrugged it off as a ‘tasting’ menu after all, but hoped that there would be a little more substance to the remaining courses! The crusty fresh bread (very, very crusty) and herb butter was a nice touch though. 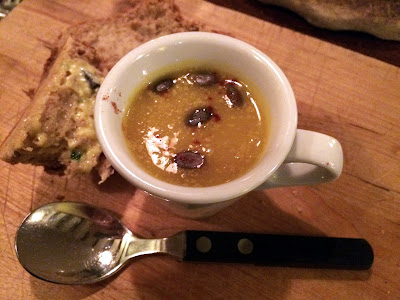 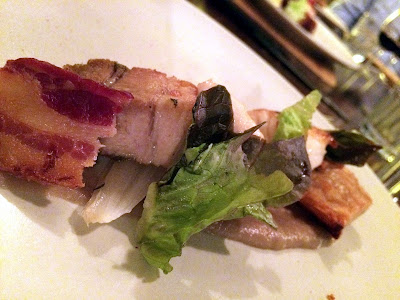 The building itself is beautiful, and with the open fires crackling in the background it as the perfect setting for a cosy meal with friends on a cold winter’s night. For my starter, I had scallops and bacon – a go to combination and so I stared enviously at my neighbour’s plate when he received two whole scallops compared to my measly two halves. But all was cooked to perfection and the flavours were wonderfully balanced. I just wanted a little more… But don’t we all? 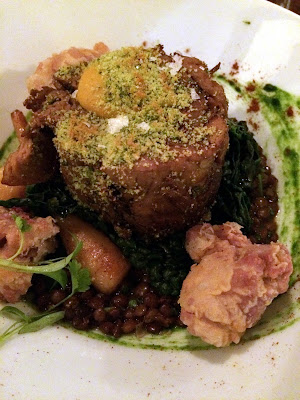 Cracking on with the mains, and we were noticeably the loudest group in the place, breaking the almost sombre hush that was noticeable amongst the other guests when we arrived. The lamb and sweetbreads was delightful, full of rich flavour and complemented well with the deep flavour of the lentils beneath. And boy, there was a LOT of lamb – making up for the other courses I guess. The presentation was rustic but still delicate, although the time under the hot plate had welded the smear of green sauce to the plate, so I have no idea what that was. 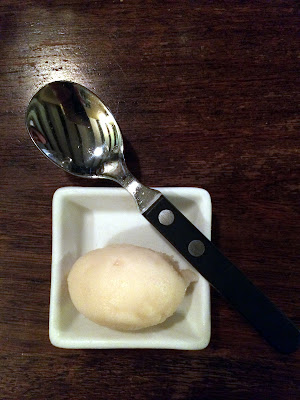 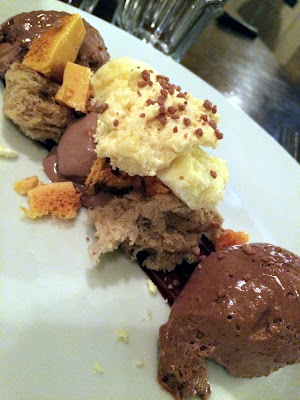 We next received our palate cleanser – a simple grapefruit sorbet. It was probably the worst thing I’ve eaten in any restaurant in recent memory. And I’ve eaten in a chain pub recently. Sour and slightly bitter, with a lingering finish it didn’t do anything that I would hope for. My mouth was far from cleansed and I yearned for dessert to take the taste away. Another rustic but still lightly presented dish followed, a chocolate mousse with central quinelle of chocolate ice cream, topped with a whole manner of accoutrements. It was pleasant enough, I had no complaints. 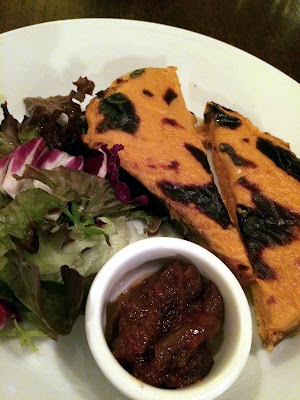 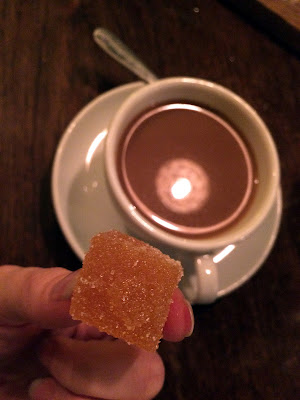 Conversely, The Boy received his Welsh Rarebit and was a little lost for words. The tomato bread was dense, and the topping was a bit of a low blow at the fine tradition of rarebit. It was basically like American cheese – you know the stuff you can potentially get in a can? The Tesco bagged salad garnish didn’t really help elevate this dish any further. Such a shame as having rarebit as a dessert option instead of a cheeseboard is really an innovative idea, but the execution really fell short.

Happily it was soon time for coffee and petit fours. The coffee was fine as were the selection of sweets that accompanied it, although I didn’t find they matched with coffee particularly well – perhaps the traditional teeny baked goods might have hit the spot better.

The verdict:
Surroundings – 10/10 – a beautiful building, a cosy fire – just a gorgeous place to dine.
Atmosphere – 2/10 – wasn’t sure if I was allowed to speak when we first arrived. Bring your own atmosphere.
Service – 5/10 – Friendly, but curt. Not quite the warm country welcome I had hoped for, and the occasional error in our order makes me score this lower than I would have liked.
Food – 5/10 – A genuinely mixed bag of idyllic highs followed by excruciating lows. Quality of ingredients is clearly there, but execution is lacking.
Presentation – 7/10 – In-keeping with the pub’s rustic aesthetic, the food is presented with thought, but not too formally. Each dish generally made a good impression when it was served.
Fine dining credentials – 4/10 – Didn’t quite have the full package for me. I was prepared to forgive a lot as the building itself is so beautiful it’s a gorgeous place to eat, however for the price we paid I expected just a little more thought. For me it’s more gastropub than fine dining and the mid-range of that, should such a distinction exist. I’m guessing their pricing is more about where the pub is located than anything else.

Next up… The Spotted Duck in Mountsorrel. Keep your eyes peeled!

The Olive Branch did not know I was going to review my visit and we paid for our meals in full.