On a mission… A burrito mission…

Edit: The curse of this unit strikes again! Mission Burrito is now closed
It’s been a little while since I wrote about Mission Burrito. It’s still a handy place to stop by for filling eats that are freshly made and reasonably priced, plus the team are lovely! So it was very nice indeed to be invited to come back and see how they are getting on, plus to have another little surprise… Stay with me dear reader!

Named by the owner for the Mission district in San Francisco, where I have been whilst wearing a flower in my hair (because I’m a walking cliche, what can I say?) Mission Burrito is all about bringing the authentic California to the UK. Taqueria culture is one of the things that The Boy and I adored about visiting Cali and so this simple little store, with its choice of fresh made salsa in a range of heats, comfortable but no frills decor and cheeky selection of Mexican beers has always been a home away from home for us. 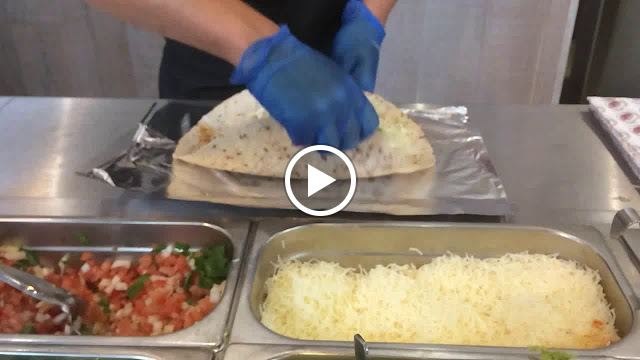 The great thing about Mission Burrito is that it really is fresh. They make their slow cooked meat in store, overnight, and the veggie option is also slowly roasted on site. They mix up their own marinades and sauces, tasting all the way to check that each batch is bursting with flavour. And they even come up with their own special recipes to mix things up from time to time – I was just in time to see a new batch of juicy marinated chicken being torn and added to the limited edition BBQ sauce that they had been preparing all through the morning, and of course, I had a little taste. Try not to miss out on that one if you can, the marinade is sweet, smoky and just a little spicy, full of cayenne and other rich flavours. 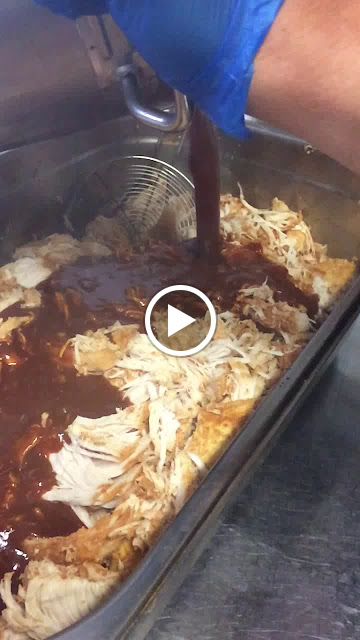 They also prepare their salsa freshly each day, and their guacamole which is perfectly chunky and yet smooth, all at the same time (just as it should be). I heard a whisper that they get through something like 200 avocados a day – I’m glad I’m not the one having to do all that prep! 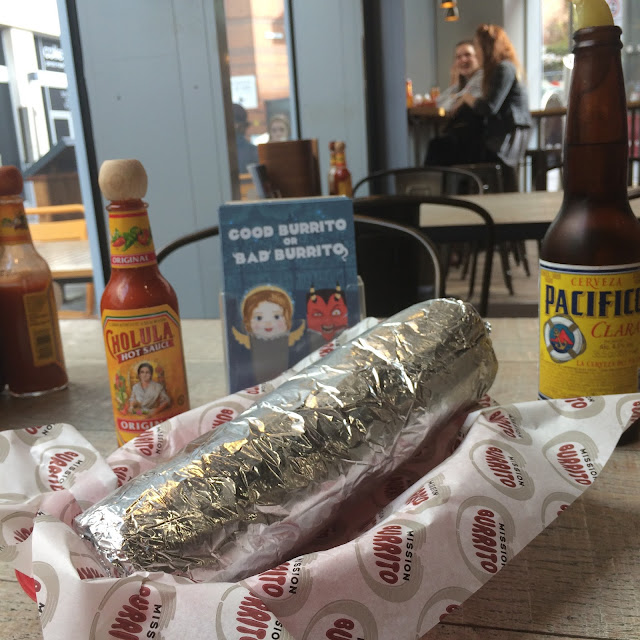 I went for the ancho chilli beef, which was smothered in a really unctuous, velvety sauce. It had just the right kick to it for my tastes and the beef is absolutely melting. And of course, you order your burrito as you like it. I went for wholemeal tortilla, lashings of pinto beans with chorizo, and plenty of salads that suited my tastes. I’m not big on pickles or chilli, but the habenero pickled onion rings and jalapeno slices seemed to be pretty popular with the other customers who visited while I was there. 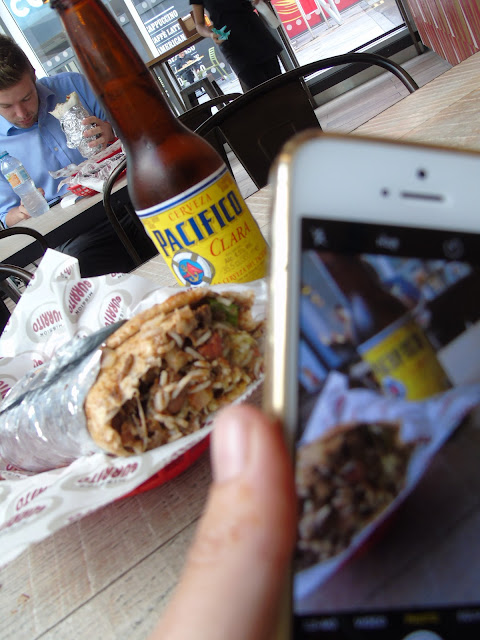 I topped it all off with plenty of guac, cheese and sour cream and dived in. It’s more than a meal, I can tell you! I lost some structural integrity as I reached the juicy, sticky end of the burrito and to my shame had to procure a plastic fork in order to stop myself from being covered head to toe in delicious foodie treats. I washed it all down with Pacifico, one of my favoured Mexican lagers which has a slightly bolder taste than many of the commercial bottled lagers we are more familiar with in this country. It was a beautiful meal. Seriously, I don’t know how I would have improved it. 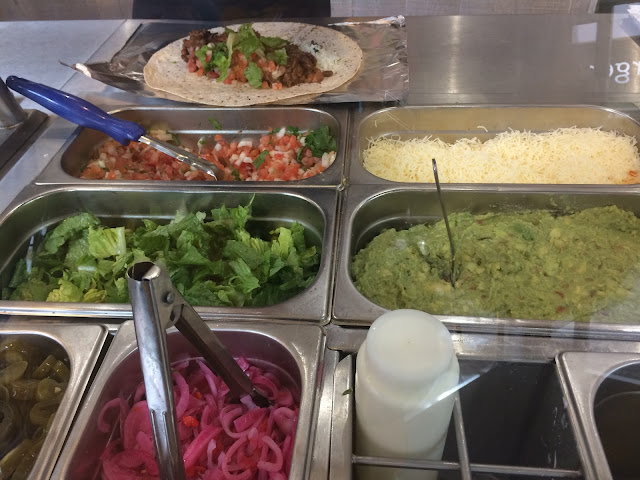 And then it was my turn! Oh yes, I was invited for a tour of the kitchen to see how the delicious burrito components are prepared and then I was challenged to make my own! Tortilla on the grill, just a few seconds, don’t burn your hands! This was already more complicated than I’d anticipated. 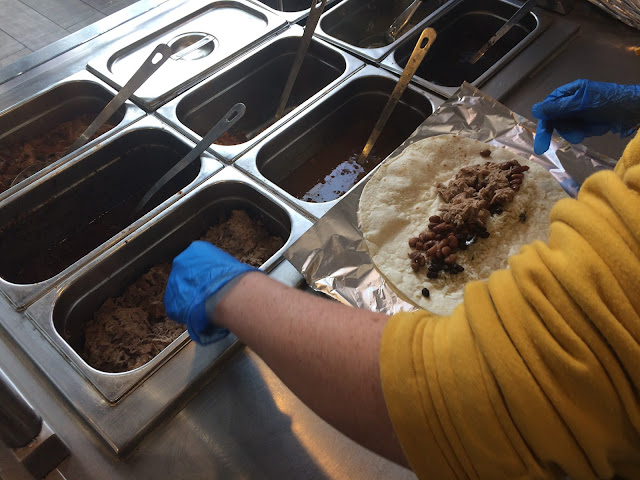 Then there was the challenge of reigning in my own excitement. I can put in whatever I want? I was like a kid in a taqueria! First the rice. Then, decisions, desicions. Carnitas this time – for me the classic, which cannot be beaten in the world of burrito meat. But black beans or pinto beans? Well, both! Why choose? I realised that my exuberance was going to come back to haunt me when I came to roll this sucker. 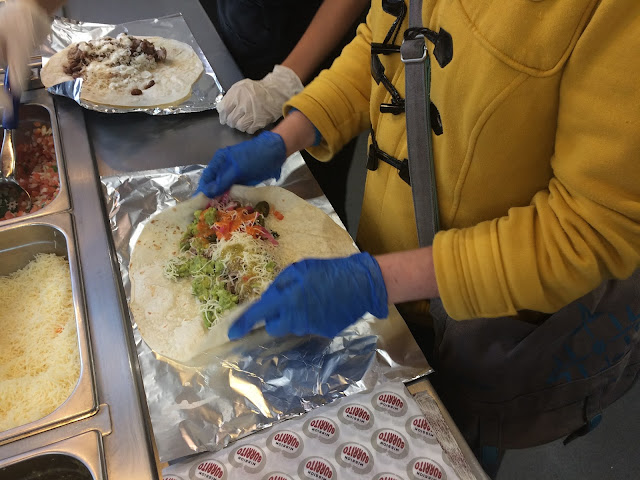 On to the guacamole and then…. Guilt hit home. I’d already eaten a MASSIVE burrito… Surely I should make this one to take home for The Boy to enjoy? Well, I decided to compromise dear reader, surely he would be happy with half a burrito? And so even more careful engineering took place, with all the spicy stuff at one end and dainty pico di gallo with extra guac for me. 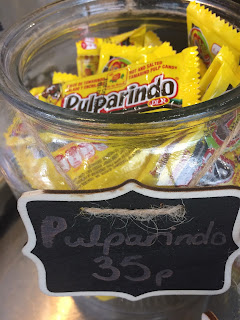 And then on to the roll. Flip the sides, level the filling, fold, tuck, roll. After a couple of false starts I was away and soon carefully wrapping my satisfyingly tight and bulgy burrito in a layer of foil. Ta da!! Apparently the job’s mine if I want it, and you can’t say fairer than that for a first attempt.

Thanks to Mission Burrito for inviting me along. I had a fabulous feed and genuinely cannot think of anything I would do to improve the food or the service. You’ve really nailed it. And I haven’t laughed so much in ages. I think my burrito rolling activities should probably be kept behind closed doors in future. But you’ll be pleased to hear that I got the loaded burrito home safely, and even managed to give The Boy the correct, spicy half. It blew his head off – watch out for that habanero sauce folks! It’ll git ya!