Edit: It opened, and then it shut. GBK is no more in Leicester.
Yes, Leicester is the Burger Capital of the country, and perhaps even the world. But the appetite must surely be there as industry giants GBK have decided to open a branch in the city, right at the heart of town outside the Clock Tower. It’s a bold move – they rub shoulders there with several competing chains and of course we all know that there are fantastic burgers on offer from independent venues all over Leicester. 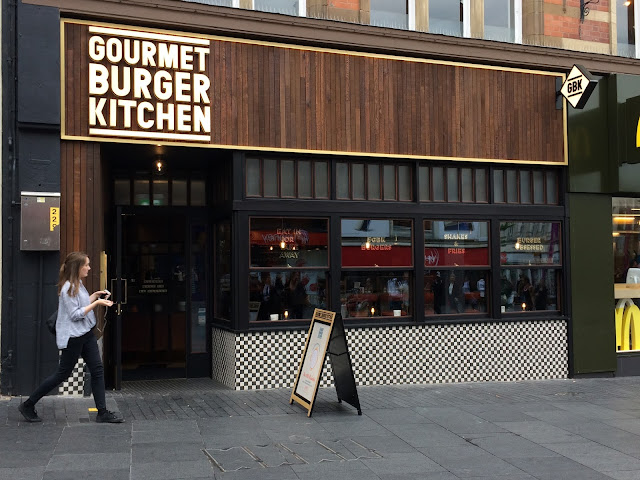 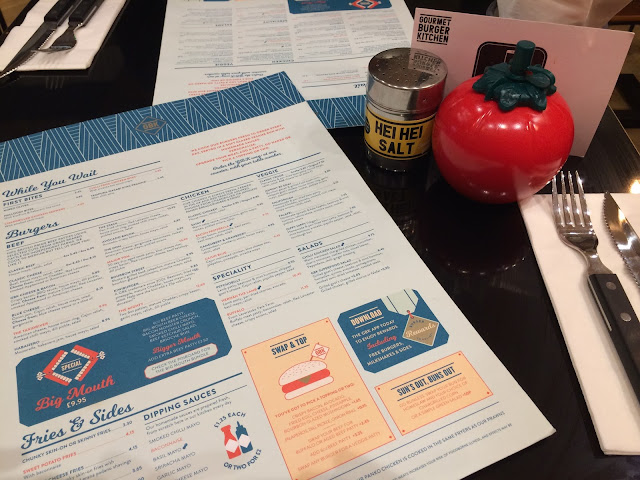 I have to say I went along to try out GBK having heard mixed reviews from others and not particularly expecting anything special, but I was rather taken by surprise. The newly kitted out restaurant is light and airy, with two floors of seating and the usual mixture of quirky, mismatched decor and exposed brickwork that we have now come to expect in our burger joints. 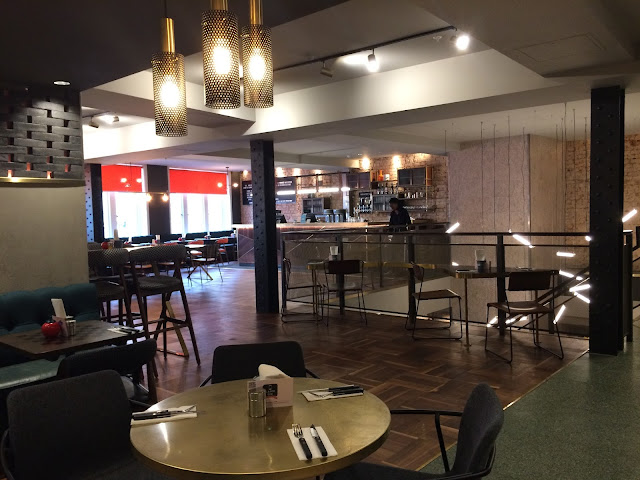 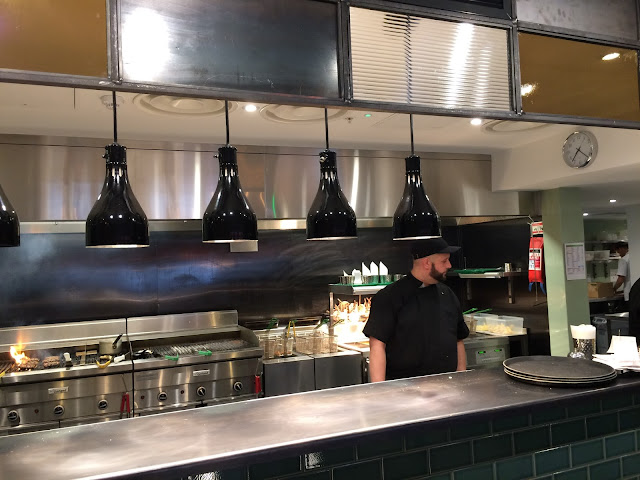 The team were welcoming and friendly, with excellent knowledge of the menu and efficient service on offer. GBK operates a counter ordering system, which makes things quick and simple – there is no waiting around for your server to take your order or present the bill. If you want to make ordering even quicker you can even download the GBK app which allows you to order online direct from your table – if you can’t bear to walk the few metres to the counter. I suppose that is incredibly useful if there is a queue to avoid. The app also gives you rewards as you collect virtual stamps during visits, so look out for complimentary treats to reward your loyalty. 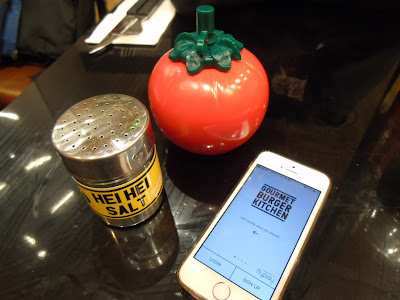 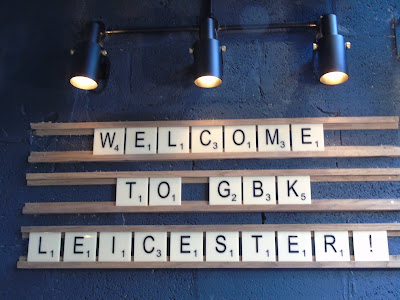 If you venture upstairs you can poke your head in the open kitchen to see the chefs at work. If you just cannot wait to fill your face there are also bins of complimentary monkey nuts available for grazing purposes, which I didn’t actually notice until we left. Minus 1 food reviewer points.

So we settled in with a drink and waited for our food to arrive. The wine list represented a good selection at reasonable value and there is also an extensive selection of milkshakes on offer for those fancying something cool and thick. The Boy was a little disappointed to order a Yeastie Boys BigMouth which was a relatively tasty session IPA but turns out to have been made by Brewdog, who we are currently boycotting (because we don’t like their business practices) and so he would not have ordered that if it said anywhere but in tiny print on the back of the can. 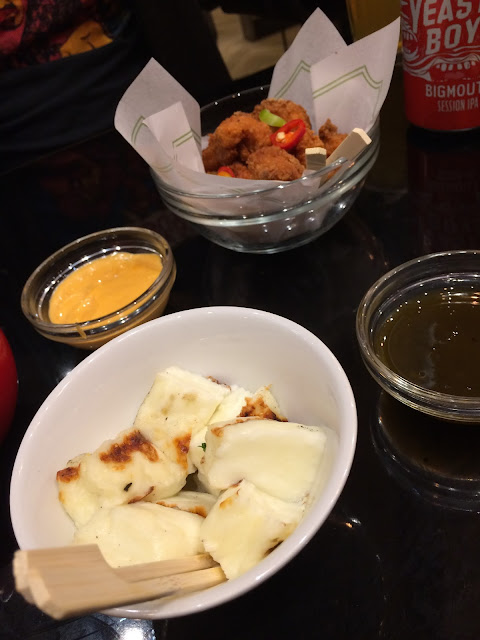 The starters arrived quickly. I went for halloumi bites, which were simply grilled halloumi pieces with a sweet kiwi and habanero sauce. This may sound like an odd combination, and it is really, but there are little hints of the company’s New Zealand heritage dotted all over the menu. The halloumi did not really have a crust to it, but the quality was good and the portion size was immense so I was pretty happy with it. Nothing like stuffing one’s face with hot cheese, right? 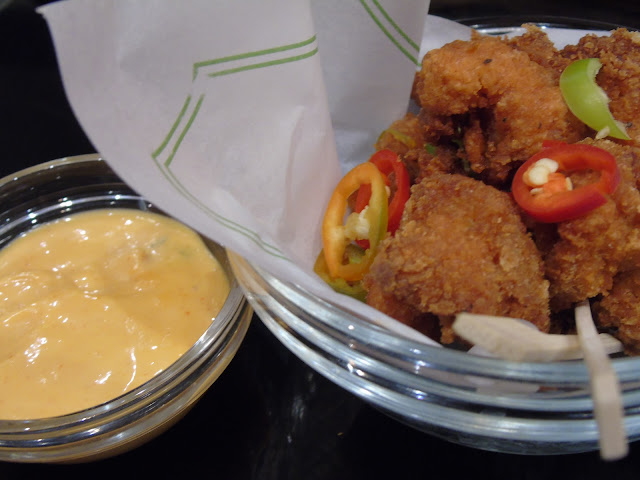 The Boy ordered the chicken bites which were spiked with fiery chilli spices and came with a chilli mayonnaise, which was absolutely delicious! The chicken was moist and the coating crispy, so this also did everything you wanted it to do. Nothing too complicated, but pretty tasty stuff so far. 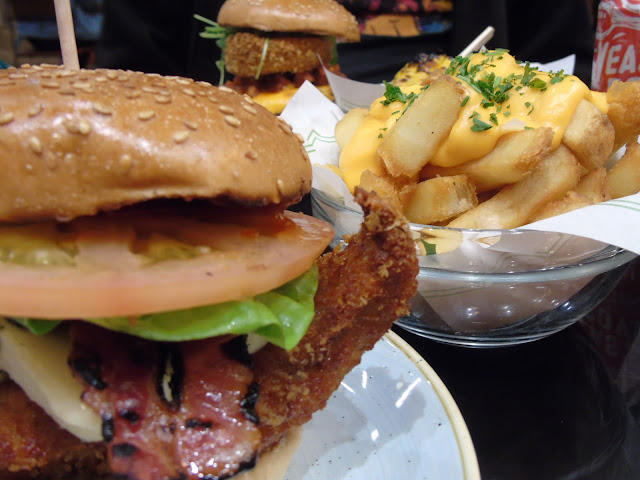 The main event is of course the burgers and there are a variety of options available to suit all tastes including four vegetarian offerings, one of which is vegan friendly. If you don’t fancy a burger then you can order a salad and of course you can add toppings, avoid the bun or tinker around with pretty much anything really. I went for the Bacon Pesterella – a chicken burger topped with crisp bacon, a slab of mozzerella and a thick layer of pine nut-heavy pesto which I really enjoyed. It was so enormous that I gave up and started using a knife and fork after only 3 or 4 bites. The basil mayo, pesto and relish gave plenty of moisture and I enjoyed having the panko-fried chicken breast rather than taking it plain grilled as it added loads of crunch and the chicken itself was still moist. 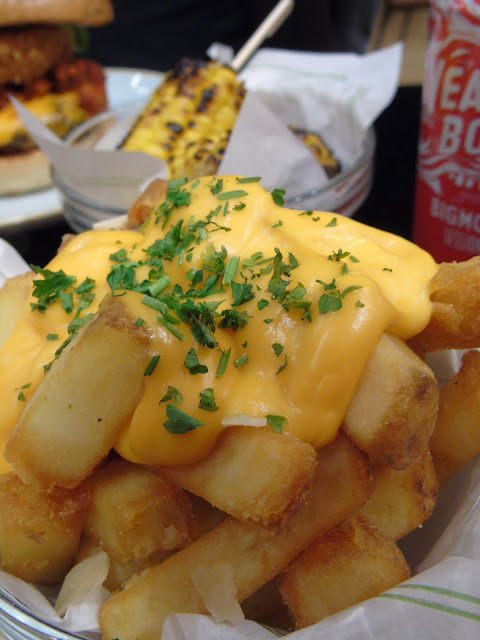 On the side I went for the truffle cheese fries – standard but nicely cooked chips served with a truffle cheese sauce which is a neon homage to American cheese, with shavings of Grana Padano cheese. It is absolutely calorific fun which is totally unecessary and therefore I enjoyed massively. But I live in a household that cannot have a BBQ without having plastic cheese on hand for our burgers, so I’ll let you make of that what you will. Despicable. Yum. 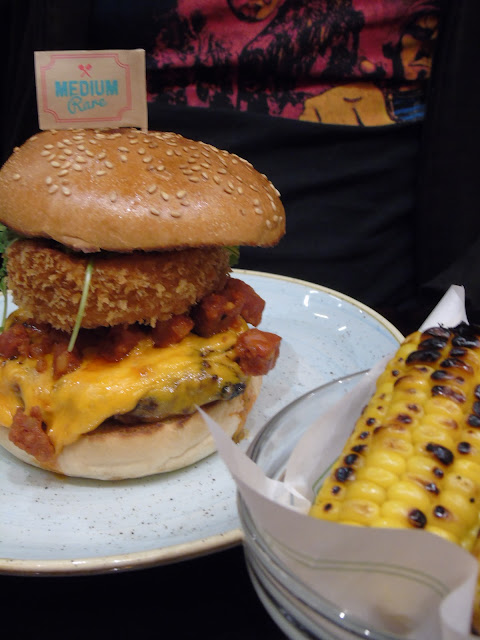 The Boy filled his face with The Stack. It’s not just a clever name. The beef burger was topped with Red Leicester and chunks of fried chorizo, a giant onion ring, pickled onions and relish, all brought together with a smoked chilli mayo. It’s a little spicy (especially with jalapenos added!) and a little bit tinged with paprika moodiness.


The burger itself was cooked medium rare and came out tender and juicy and with great beef flavour. All of the meat they use is British from grass-reared cattle and this does come through in the taste. He teamed this monster with a small serve of corn on the cob which was soaked in butter and so juicy that I had to duck to avoid the squirt of juice across the table when he bit into it. Graphic, but true. 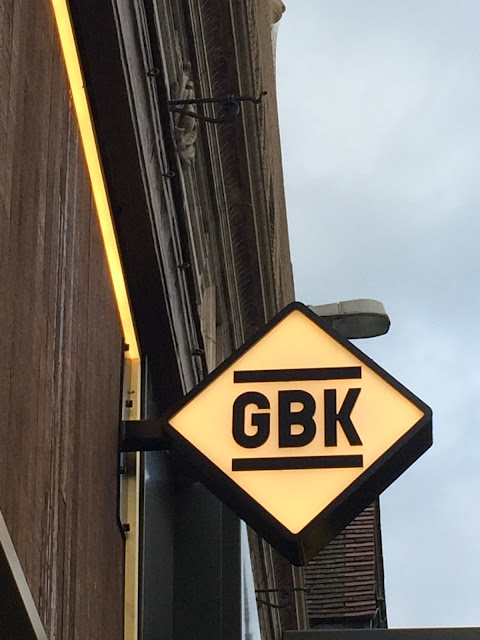 So overall, we were mightily impressed. This is a burger joint without airs and pretensions and it delivers precisely what you are expecting. I went in expecting to be unimpressed and left as a relative convert. The meat is perhaps not quite the same quality as you might expect from an independent, but the burgers are tasty and hugeeeee! Next time I might serve the starter. And the side. Or, more likely, I might just go and have the truffle cheese fries for lunch because they are just filth.

Thanks to GBK for inviting us to try their new restaurant. This review is my honest opinion of our experience, warts and all.*

* No warts were involved.