Mastodon 3 of the Best Gelatieri in Italy ⋆ Laura Hadland: The Extreme Housewife
Skip to content

3 of the Best Gelatieri in Italy

As well as visiting the Gelato Artigianale Festival in Agugliano this June, we were fortunate to have the opportunity to see some of the incredible Maestro Gelatieri we met in their natural environments – their own gelaterias. They are all notably 100% hands on, creating recipes, researching ingredients and of course, serving gelato to an adoring public. This is very different to the ‘celebrity chef’ culture in this country, where all too often it seems like chefs slap their name on a restaurant chain and then never do anything but turn up for periodic promotional photographs. 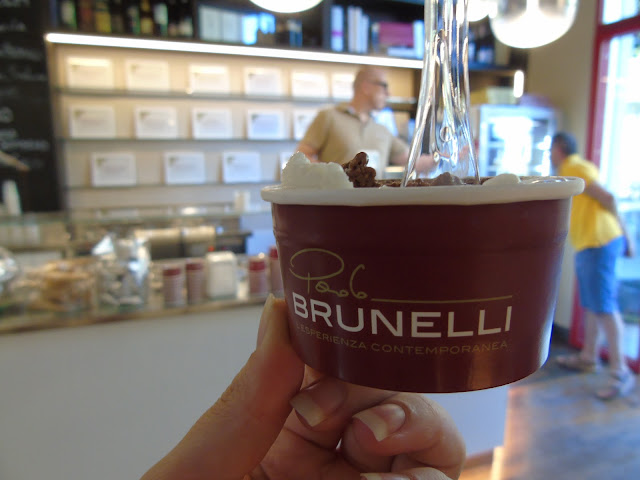 One of the great driving forces behind the Gelato Artigianale Festival is Paolo Brunelli, whose first gelateria is situated right in the heart of Agugliano. We also travelled to Senigallia by the coast to see his other venue and of course to enjoy some of his creations.

It was a real honour to get to spend so much time with Paolo, who is one of the real innovators of the truly artisan gelato movement. He has just released a new book ‘Gelateria per tutte la stagioni’ – the gelateria for all seasons – which boasts 365 days’ worth of ideas drawn from his enviable experience of the world of gelato and proven experience as an experimental, flavour-driven artist and artisan. 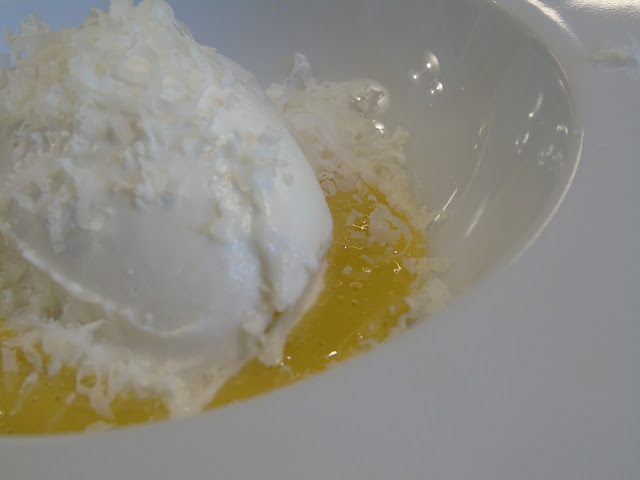 Amongst the many wonderful flavours and textures that we experienced during our visit, including Paolo’s work with gelato, sorbetto, flavoured jellies and sauces and more, the stand out dish for me was the creation pictured here. This shows the sort of development that he is showcasing in his new book – gelato based creations that are full, plated, fine dining desserts. 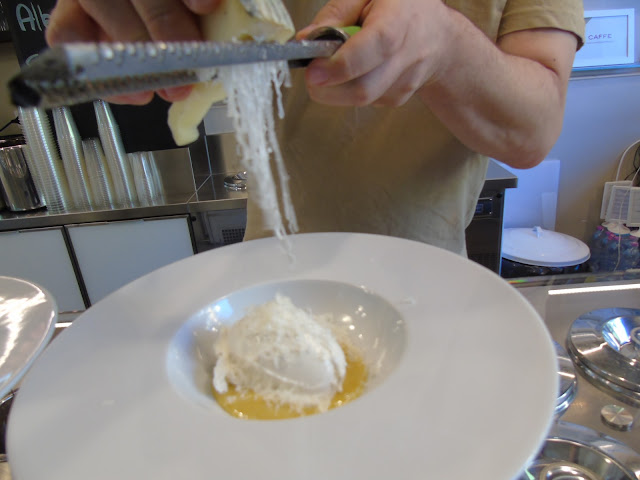 As you would expect, the dishes are kept simple and uncomplicated – allowing the flavours of the superb quality ingredients to shine through. This was a Fior di Latte gelato nestled on a bed of Zabaione sauce and topped with a sprinkle of freshly grated Pecorino cheese. I’m sure you can imagine the melding of flavours – sweet, creamy, salty, tangy and more – just a sublime combination. I look forward to seeing more gelatieri taking Paolo’s lead and moving gelaterias more to the Fine Dining category. True artisan gelato certainly deserves to be recognised for its artisan quality and this feels to me like the next step. 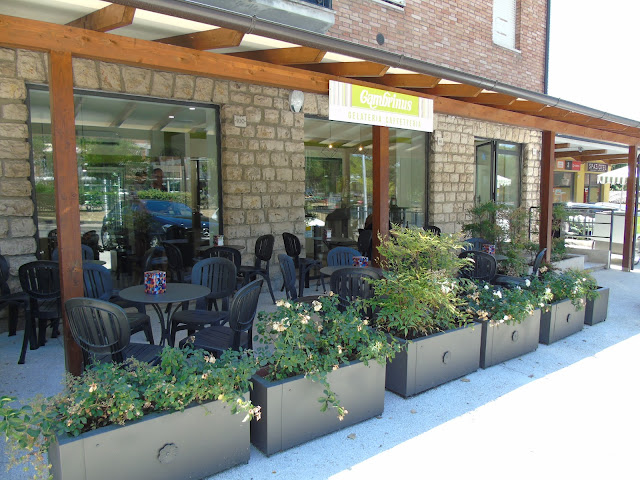 Onwards to Matteo Carloni, a bright, bubbly and incredibly enthusiastic gelatiere who runs his two Gambrinus venues in Perugia, one right in the heart of the historic town and another much further out in the suburbs. 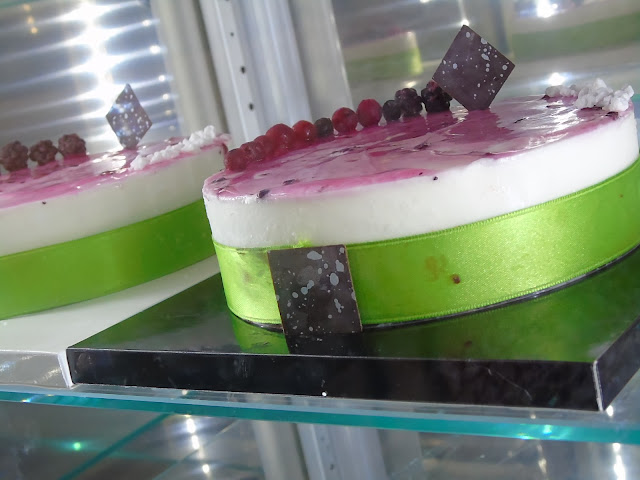 Like all of the gelaterias we visited, Matteo does an exciting offshoot of gelato based products – here in Leicester, we refer to homemade gelato lollies as ‘gelollies’ – I’m not sure what the Italians call them! But there were also numerous gelato celebration cakes in evidence, all beautifully decorated to a standard that would be applauded by any patisserie chef. It was interesting to see so many shared ingredients that we see in Leicester too – San Biagio, Sur de Lago dark chocolate – it really inspires confidence that the gelato we see from the artisans at Gelato Village is authentic and the ingredient choices shared by those still in Italy. 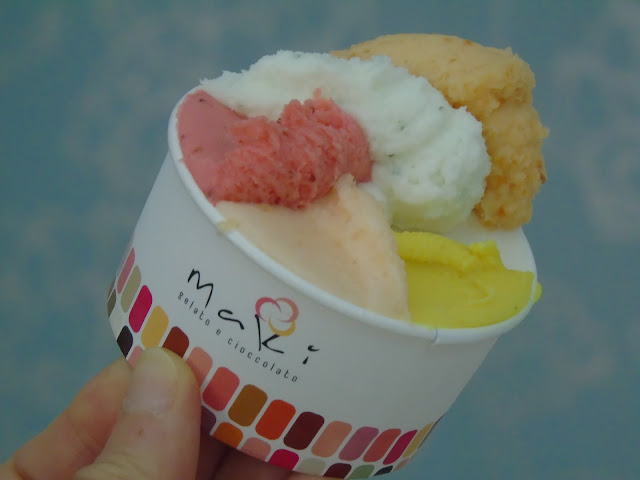 Finally we stopped in the historic town of Fano, which is absolutely overrun by bicycles, because apparently there is no public transport to speak of. It is wonderful! Here we met Antonio and Paola Luzi of Gelateria Artigianale Maki, where I had a cup containing the most different flavours of gelato and sorbetto I have ever had at once in my life. Truly a cornucopia!! 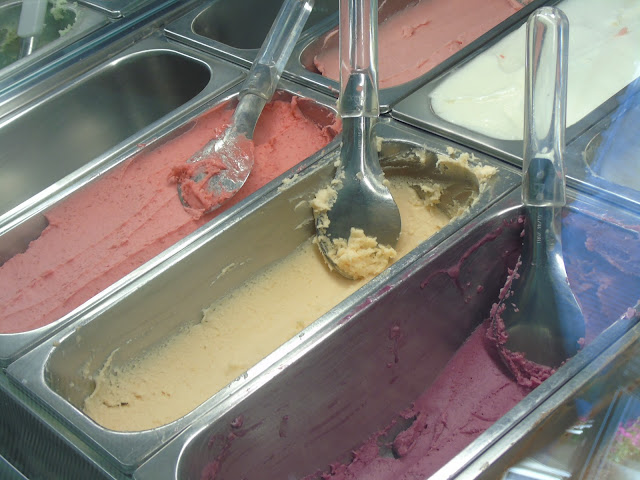 They are both incredibly skilled gelato artisans and their flavours also show the creativity and flair that I am now becoming used to! ‘Thai Golden Milk’ was a particularly interesting and inspirational idea, particularly with the sort of flavour palettes we have available here in Leicester.

I also found it interesting to begin to be able to identify the differences between the gelatieri and their styles. While Paolo Brunelli seemed to be a fan of big, bold flavours, squeezing as much flavour as he can out of each ingredient, the Luzis struck me as having a much lighter touch, being concerned with often more complex combinations where they carefully struck a careful balance between the key notes of each ingredient. It is very much like being able to recognise the signature sound of your favourite bands and it is something I am loving finding more about! 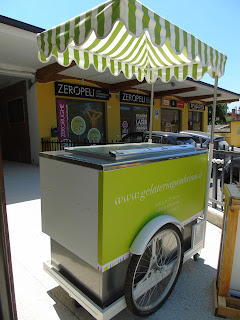 So next time you visit Italy, do a little research in advance – make sure you know who is making real gelato and who is not. After all, you might as well give your Euros to these small independent craftspeople, rather than big chains who don’t necessarily use the best, seasonal ingredients, right?