It’s not very often that you get invited to Italy for the sole purpose of trying gelato, discussing gelato and learning about gelato. In fact I can categorically say it has never happened to me before. But this week I write, dear reader, from the comfort of a spacious apartment above the Porta Palazzo in Torino (Turin) and, having had a delicious Cornetto Crema (creme patissiere filled croissant) for my breakfast, am now reflecting on my first 24 hours in the city at the prestigious Terra Madre Salone de Gusto festival.

The festival is one of the most internationally significant celebrations of Slow Food principles, with a deep focus on sustainable production, ethical sourcing and organic principles. To this end, giant snails are everywhere in the city reflecting the international Slow Food logo. Itàs a huge event, with around 500,000 people expected to visit this year. Turin has been booked up for months in anticipation. 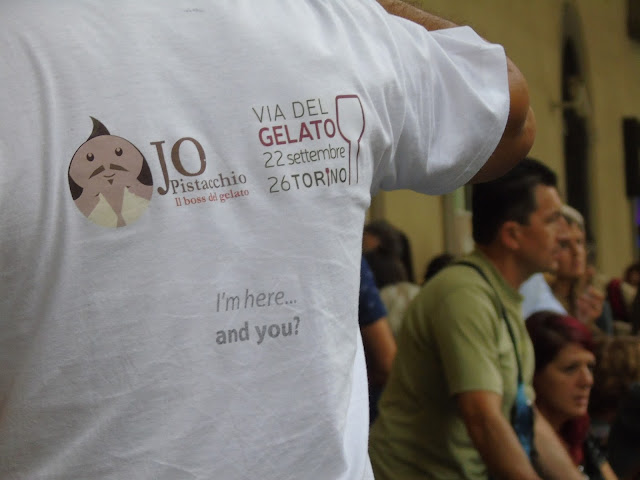 In previous years the festival was all centred in one exhibition hall, but this year it has been expanded out across the entire city centre, which includes a bespoke ‘Via del Gelato‘ on Via Po, based around the Turin incarnation of the suite of gelaterias of respected Maestro Gelatiere, Aberto Marchetti. This provides what is very recognisable to an English person like myself as a beer festival environment, but with gelato! You buy your tokens and then cash them in at the various gelato stalls to try different flavours and combinations.

Of course the focus is on traditional, authentic gelato making and there are a series of talks and workshops running which give an insight into these methods. Leicester’s own Gelato Village was invited to speak at a number of these sessions on the first day of the Via del Gelato yesterday and discussed how they have been bringing this traditional product to an English audience, invoking much curiosity from the assembled masses of master Gelatieres from all over Europe who are present at this event.

I have particularly enjoyed seeing the older fashioned ‘vertical’ method of gelato churning taking place, both with an antique set of kit which is hand cranked and cools the gelato mixture through a surrounding bath of salt and ice as well as a more modern setup which does the same process mechanically. These vertical machines are totally obselete now – you can only buy the automatic ‘horizontal’ variety new and relive the old method with a second hand model. However, it was lovely to see both mechanical and hand-cranked styles in operation yesterday because it relies on the skill of the Gelatiere to judge when the gelato is ready, feeling the resistance of the soft dessert against the paddle to feel the right consistency has been achieved and then skillfully flicking the finished gelato out on the paddle for serving.

We also met Italy’s premier Italian gelato blogger, Jo Pistacchio who has been introducing us to key people as well as great ingredients. As you would expect, a lot of the attention here is focused on the sourcing of the finest ingredients from around the globe, but with a natural emphasis on the high quality raw materials that can be sourced in Italy. Pistachios, hazelnuts and more from this country have protected geographical indication status as well as immense pride being accorded to the quality of the milk, honey and fruit available. In particular, the Amalfi lemon is much prized, with crates of flavourful fruits bigger than your fist being scattered around the Via del Gelato.

It was fantastic to try Alberto Marchetti’s Fior di Latte gelato, a very simple gelato which puts the flavour of the milk at the fore. This was deliciously rich and creamy and a true showcase of both the skill involved in its creation and the quality of the natural ingredients of which it is composed. However, it did make me realise just how lucky we are to have Gelato Village in Leicester, whose milk and cream all comes from Belvoir Ridge Creamery’s Red Poll cows in Leicestershire, which creates a unique flavour and is always supremely fresh. To my mind it is a superior Fior di Latte, but of course I have a heavy bias! My next mission is to try some local Pistacchio gelato to compare the quality of those, as that is definitely my favourite Gelato Village item!!