Well we’re home after a fantastic time of gastronomic adventure in Torino at the Terra Madre Salone de Gusto – the birthplace of the Slow Food movement. [Edit – apparently it’s near the birthplace. Slow Food was born in Bra, a small place south of Turin, but still in Piedmont, so slap on the wrist to all the stallholders at the festival suggesting it was Turin!]

As well as this, probably the most significant international food event in the world, naturally there was a whole gamut of local food to explore and we took the opportunity to try as much as we could. 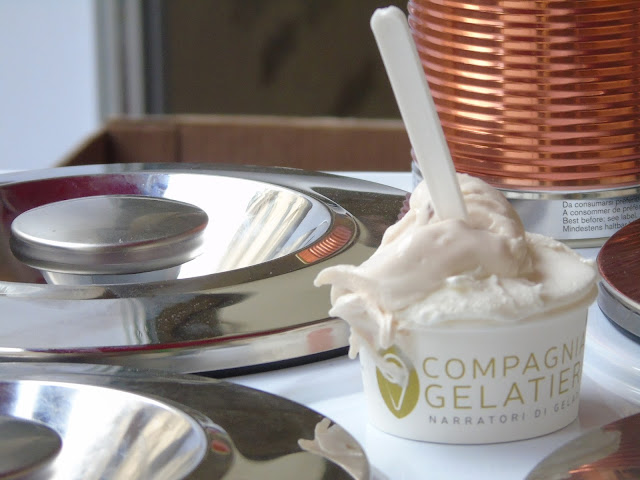 Of course, there is great, artisanal gelato as I have already discussed, but much more besides to sample. Some is relatively unique to the city, others to the region of Piedmont and of course others are now relatively ubiquitous across Italy as people move and take their home favourites with them. Here are a few of the highlights we tried.

Probably my favourite dish was this delightful antipasto. Thin slices of veal – definitely one of the favoured meats of the region – are served gently braised over a long period of time, giving them a soft, sumptuous feel in the mouth where the full flavour of the meat is able to dominate. This is topped with a delicate but complex creamy sauce flavoured with tuna, anchovy and capers which makes it sounds like it will literally explode in your mouth. Such is the skill of the Torino chefs that they can blend these punchy ingredients into such a light experience with every ingredient developing in the mouth, having its place to create a whole that is so much more than just the sum of its parts. Absolutely unmissable.

Next up in the antipasto stakes there are a range of options so often it is nice to get a platter to try a little bit of everything. Surprisingly, the seafood in Turin is very good, despite the distance from the coast. Fat anchovy fillets are served either with pungent olive oil or a vibrant green sauce  Tomini is a beautiful soft cheese, a little like a ricotta but without as much texture, served with a fresh herbacious green sauce. Also look out for the sweet and tangy preserved vegetables in tomato sauce with a good balance from vinegar and good olive oil. A real local’s favourite, this is truly flavoursome veal cut into tiny slivers and served in a patty-like mound, with simple seasoning and olive oil. Rare as the day is long, the ‘Razza Bovine Piemontese’ is the high quality local cattle, bred with a low cholesterol content which remains delightfully juicy despite the absence of any significant marbling. It’s incredibly meaty, it can be nothing else and is a tribute to the Torino obsession with high quality, regional produce.

In the right season, you’ll see these in a variety of dishes. I enjoyed them as a garnish on top of a pesto tagliatelle with courgette which was absolutely beautiful, just the most flavourful basil explosion I have ever had but still with the courgette coming through. As with all Italian cuisine, it is the simplicity of the dishes, allowing the quality of every single ingredient to shine out, that really makes it so, so enjoyable. 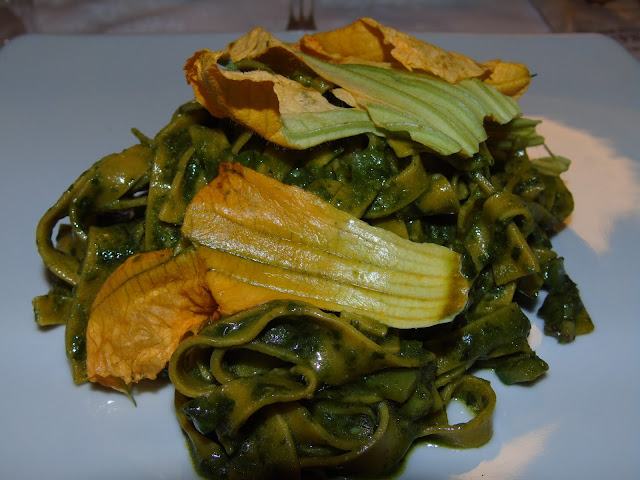 I also saw a stuffed courgette flower dish, with the flowers served with ricotta stuffing, as well as the flowers as a garnish on a Vitello Tonato salad variant. All beautiful, fresh dishes. 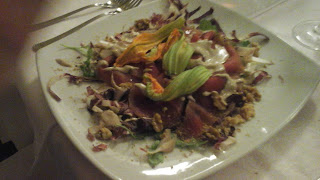 A ravioli-like stuffed pasta with meat and vegetables inside and yet more veal in the sauce. A deep and earthy dish with the perfect balance of savoury flavour.

A meltingly soft beef dish in a savoury, quite heavily salted broth served with potatoes. It’s all about the quality of the meat which provides that comforting, melt in the mouth texture. Absolutely beautiful with the great bodied, deep fruited red wines of the region. 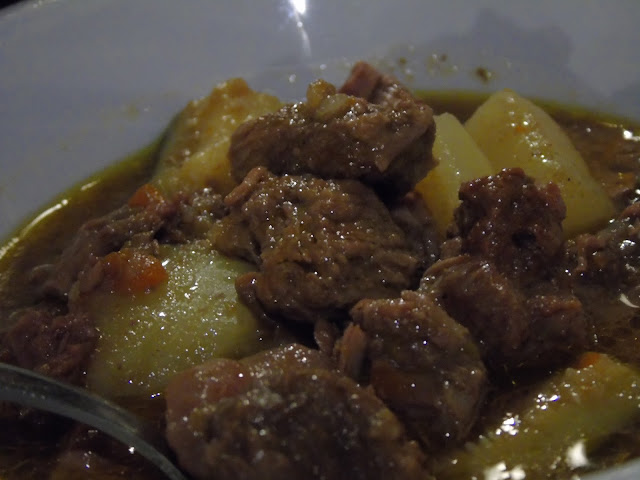 Another thing that seems to be very popular in the region is rabbit. We sampled a rabbit ragu over spaghetti that had a great balance of gamey flavour with rich, slowly cooked tomatoes as well as a main dish of stuffed rabbit leg which was really showcasing rabbit at its absolute best, with a great boost of flavour from the breadcrumb based stuffing, run through with herbs and carefully chopped vegetables. Served with both a rabbit gravy and a cream sauce, this is something that I would be happy to see in this country! 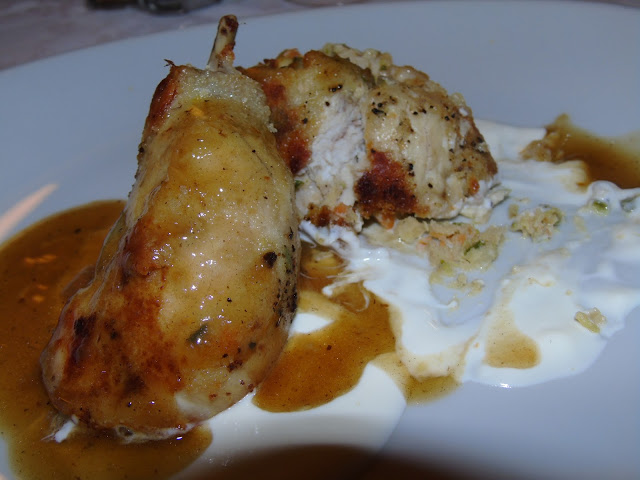 Something I don’t remember ever seeing in the South of Italy (although I could be mistaken!) is the Tris – a trio of dishes in one, with a small portion of primi, secondi and contorni (starter, main and side). The one we tried was notable for the main dish, which I have literally no idea of the name but it was a bean dish run through with a variety of sausages. It was heavily seasoned and full of flavour from the slow cooked stock with carrots, onion and celery. The black beans were beautiful and silky soft. 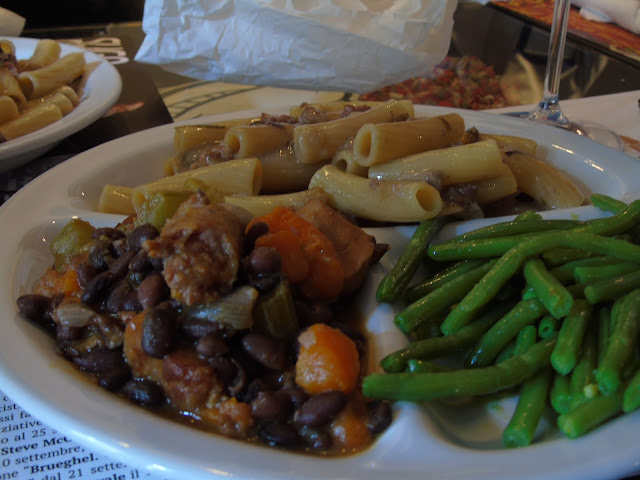 Best of the rest…

Of course, each region of Italy has its own speciality meats and cheeses. As I’ve already noted, Turin has the largest market in Europe and there is no shortage of local products available. From the various salami, I would urge you to seek out the black truffle variety which is powerful and deep, just an incredible complement to the thick textured, slightly sweet meat. If you like your cold meats big and bold this is the one for you. 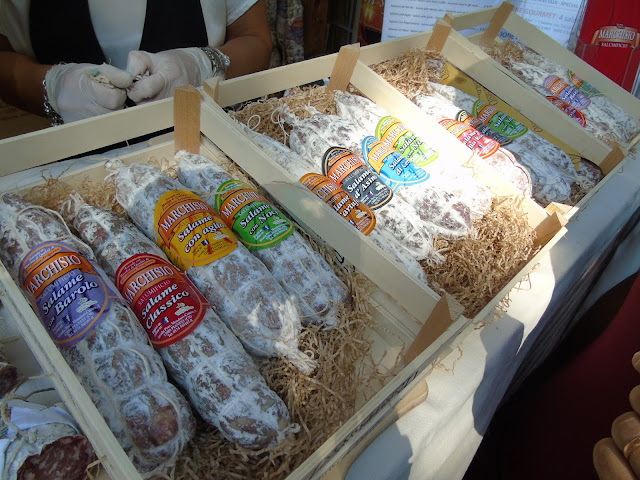 We found a small producer of sheep’s cheese in amongst the huge number of Terra Madre stalls (with a vineyard attached, so more on them soon!) which were absolutely incredible. La Campore are true craft producers of astoundingly high quality sheep and goat’s cheese, from soft, fresh balls of soft cheese seasoned with a variety of ingredients including curry powder, poppy seeds or their home grown hemp seed, to their hard cheese, served at a variety of maturities for comparison. Absolutely fascinating to see the difference in taste and texture in 1, 2, 3 and 4 months of maturity. And of course, it was all served with the typical ‘grissini’ breadsticks.

And an honorary mention for the ‘Limoncello of Piedmont’, or so it was marketed to us! An almost syrupy sweet liquor full of mint flavour which is more of spearmint than any other kind of mint. Refreshing as an aperitif, or as a long drink, or as it was suggested to us, as a topping over gelato I thought this was an interesting little find. Something I would have again and apparently something which may have its origins elsewhere as mint was brought to the local hills to Turin and became a hit with the locals – a refreshing summer soft drink also being milk with mint! 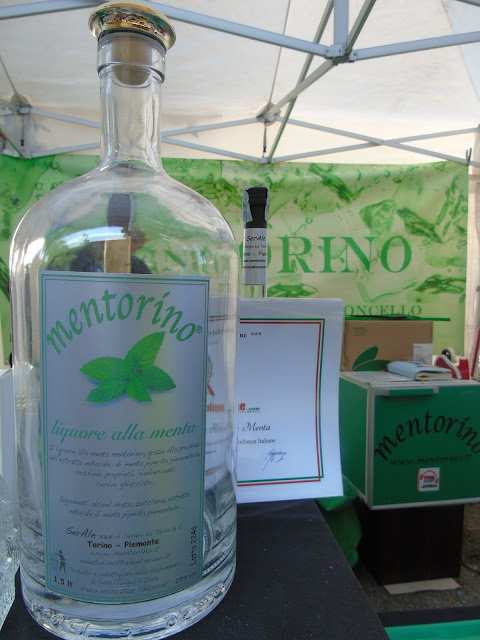