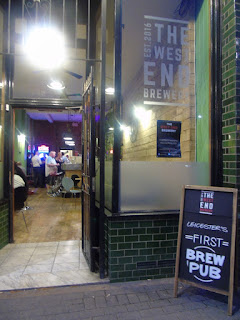 It feels like non-stop celebration in the city at the moment! First we had the football, then my favourite gin distillers Burleighs celebrated their second birthday, Andy Murray’s just gone and won Wimbledon and now we’re celebrating the first anniversary of Deliveroo coming to our fair city.

I’ve been in on the ground floor with Deliveroo – a takeaway service bringing you top nosh from some of the best restaurants in the city. Their cycling delivery team have become a familiar sight on the city’s streets, bringing us everything from gelato, to gourmet burgers, to modern British-Indian cuisine.

Even though we live just outside the Deliveroo delivery area, we can still enjoy their excellent service. We took ourselves down to The West End Brewery on Braunstone Gate. If you haven’t familiarised yourself with this little brew pub yet I highly recommend that you check them out.

Open since March, they have already developed a bit of a cult following of people who enjoy the great ale that is brewed on site. They tend to have three different brews on at any given time, as well as a number of guest ales so you will definitely find something to match your food, whatever you choose to order.

We decided to try something we had not tried before and so we chose to order from Norah’s Cafe on Humberstone Gate – a cafe that does traditional English grub as well as Egyptian fare! I’ve never had Egyptian before so I was really interested to see what was on offer. That’s something I like about Deliveroo, there are so many different cuisines available. 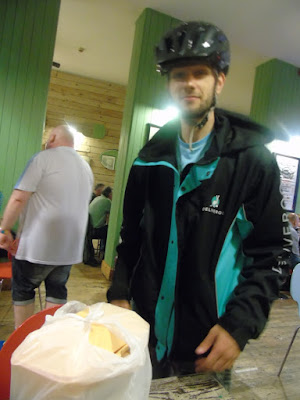 Five minutes before the estimated delivery time (we’ve never known Deliveroo be late yet!) our friendly delivery chap turned up on his bike and passed us our piping hot food. He took a moment to pose for a photo for me before dashing off to make his next delivery.

We ordered an eclectic mix of food! First off the Egyptian breakfast, even though it was 9pm… It basically sounded like a delicious mini mezze so I couldn’t resist. We had salad, a fried egg, hummus and falafel, pitta bread and a big tub of medames to dip it in – a hummus like dip made with fava beans. Lush. 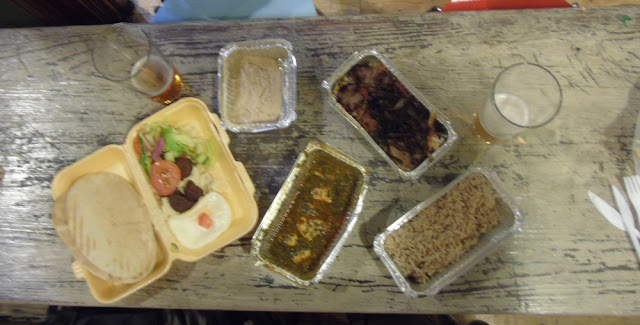 To go with that we also ordered a chicken with molokhia, the leaves of Nalta Jute which came in a then but flavourful sauce and a tub of flavoured rice. This was a really tasty dish, the leaf being vaguely reminiscent of spinach and the sauce having a nice balance of savoury and sweet. I really enjoyed it, although we thought that more of the succulent diced chicken could have been included, it felt a little sparse. 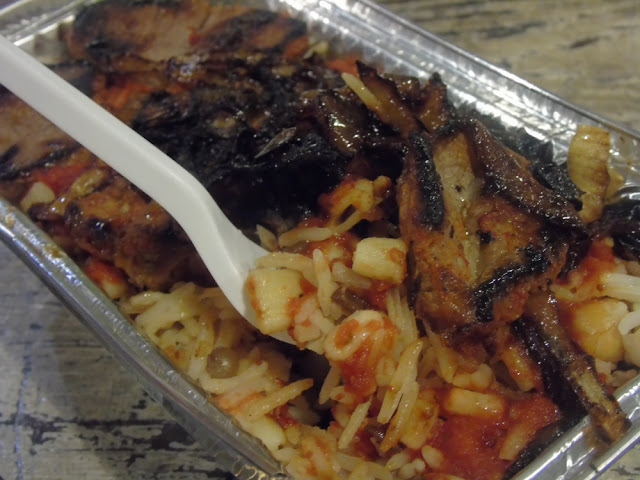 Next up was the lamb with koshri. This was thinly sliced lamb – tender and full of flavour, although again not quite as much of it as was needed to match the accompaniments. It was topped with dark, sweet fried onions and that all sat on a bed of pasta and rice, with tomato, lentils and chickpeas running through it. A baffling amount of carbohydrate, but wonderful to eat!

So, a filling and intriguing takeaway, something a bit different that matched really well with the West End APA which we were enjoying at the same time. The West End Brewery welcomes people ordering from Deliveroo so pull up a pew, get a pint in and get something delicious on order.

Thanks to Deliveroo for inviting us to review their service in celebration of their birthday.
We paid for our beers at the West End Brewery in full!