So a week ago I decided it was time to make some small changes to my lifestyle in order to shape up a little bit for wedding season, since many of my friends are getting married this year. I get really bored of fad diets and whatnot in the media and clean eating blogs and all that guff. We all know what we need to do if we want to get a little bit more trim and that’s eat less and exercise more.

Determined to act sensibly and most importantly, use this as an opportunity to introduce more fun into my life, I’ve been making a number of teeny tiny small changes to my lifestyle in the hope that it will have an impact.

Don’t eat boring, don’t deny yourself and don’t cut out important food groups like avocado and bacon – this has been my mantra. I did decide that a sensible rule would be not to have anything with chips more than once a week, but it turns out that hasn’t been a problem at all and I’ve actually easily been able to avoid them without feeling like I’m denying myself something. Which is incredible given the state of some menus in this country, you’d think chips were mandatory.

The first day of my making a small effort I power walked my way to Dolce and Verde on Belvoir Street and ordered myself a salad. It was fully loaded with chicken, avocado and bacon, but lightly dressed and fabulous on a warm day. In fact, I barely needed anything else the rest of the day (and no I wasn’t starving myself, just a bit of fruit later on did the trick) but the protein was excellent to give me the energy for my daily commute.

That was also my first opportunity to make my coffee ‘skinny’ which is definitely a very little change as I already take sweetener or don’t have sugar at all so the difference is probably minimal, but I figure it all adds up. Normally, if I couldn’t immediately see sweetener available I would just use a sugar packet, but now I’ve been making an effort to ask for it or go without. Yesterday I enjoyed a refreshing iced latte at The Coffee Counter which of course did not need any sweetening at all. That was awesome in the sunshine, mid-morning on my way to a meeting, when I had barely had any fluid all day.

I’ve also been enjoying smoked salmon open sandwiches with salad, sushi, daal, plenty of avocado and even a lean grilled burger at home on the BBQ with lots of grilled veg on top (and a small amount of cheese and bacon). The Boy also made some delicious slimline ragu style stuff with some turkey breast he had gotten all smoky on the BBQ and having that as a light wrap with plenty of salad was just right.

To be honest, it’s been pretty easy to keep my portion sizes under control too because of the weather – after a decent lunch I’ve not been in the mood to eat very much in the evenings as it’s been so hot. The hot weather has also encouraged me to drink plenty of water. As well as my usual alcohol free days in the week (which I have always made sure I observe) I am now finding that after a couple of glasses of wine I will be inclined to have a pint of water at the end of the evening before bed instead of another glass. Sometimes. 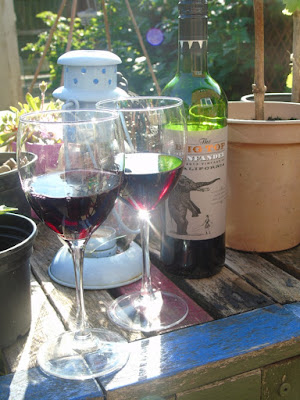 Of course I could cut out alcohol all together. That would probably be a good way to get rid of what I affectionately call ‘the wine belly’. But that would make for a significant drop in blog posts about wine, beer and cocktails and I’m not sure I can do that to you just yet, dear reader.

Things have also been pretty avocado heavy because I managed to get 12 for £1 at Leicester Market. You just cannot argue with that for value. They’re all perfect as well, they seem to be taking it in turns to ripen so each one is perfect when we come to use it.

I’m already reasonably active, I like to think, given that I do my daily commute (7 miles in total) on the bike every day. To try and take that up a notch I’ve been taking a slightly longer route on some days and also putting in a bit more determined speed, rather than just pootling too and from work which is my normal act.

On top of that, where I don’t have meetings on other sites to go to (I spend quite a lot of time walking back and to across the city centre as it is) I’ve been adding in a walk on my lunch break. I had a lovely amble around Castle Gardens the other day flanked by a mass of DMU students with their parents taking graduation photos. It’s not just a slow amble either, I’m making sure I’m walking with purpose to the point where my heart raised is raised and I notice a pick up in my breathing. I’m not running though, that way madness lies.

The Boy and I have also been getting out and about in our spare time, on the bikes or walking. I managed to get down to do an evening in the vineyard after work one day, which is always a good bit of physical work, tending to the baby vines. In combination with an occasional bit of pottering in the garden this makes for some low impact, blissful calorie burning.

I made The Boy play frisbee with me the other day whilst we were walking through the park, which was a lot of fun and does get you out of breath surprisingly quickly! We’ve got a football in the house from when we went out on the Pedal Bus so that’s going to be broken out this weekend. LCFC will be clamouring to sign me in no time.

So none of this has been difficult. I’m not cutting out vast swathes of food groups, or skipping meals, or spending a fortune on a gym. I’m just pimping my lifestyle a little bit. And you know what, it seems to be working. In this one week I have lost an inch off my waist. I don’t know how much weight, because I’m not weighing myself, because I think that is a particularly unhealthy behaviour. If I can lose another inch off my waist in the next few weeks that’ll be great. If I can keep this going beyond wedding season and maybe lose 3 or 4 inches in total, that’ll be perfect. And I can’t see any reason why I can’t keep this up and make it into my new lifestyle because actually all I’m doing is being a bit more conscious about my choices.

So now over to you! Name me some fun things I can do to get a bit more exercise, or some nice places that do super healthy, delicious food. Go on, write a comment below, I can handle it!