Everything’s Well Done at Steakout – even when it’s rare

We had a fantastic meal yesterday at Granby Street’s Steakout Meat House. Greeted by an immaculately clean restaurant and welcoming staff, we settled into a comfy booth surrounded by tiny cows and perused the menu. 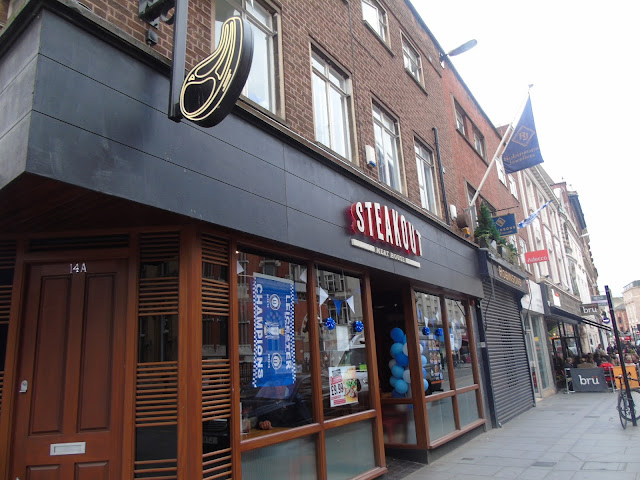 Everything at Steakout is made fresh each day – from starters to puddings – and I thought that really shone out. While we were deciding what to eat (a hard decision from the luscious sounding menu) we were treated to some colourful mocktails. The Mojito was full of minty, refreshing flavour which complemented the lime perfectly and the Strawberry Daiquiri was fresh, sweet and satisfying. I’d definitely recommend the Mojito to cut through the bold meaty flavours of the main courses. 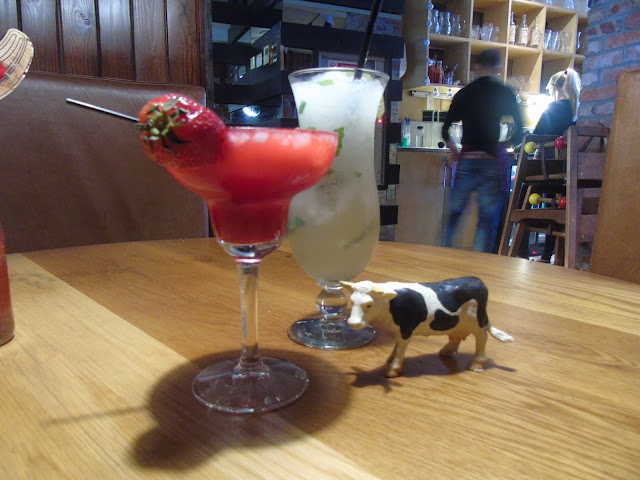 To start I went for the chicken cheese balls. Freshly made on site, these are soft, gooey potato cakes filled with cheese, chicken and a great amount of fresh herbs which really come through in the flavour. I think there’s a little green chilli in there too – a mild heat which creeps up as you eat the dish. They were perfectly fried in golden breadcrumbs, which gave a lovely mix in textures. My only criticism would be that they were very slightly underseasoned – I think a little more cheese would have sorted this out a treat. Still thoroughly enjoyable nonetheless. 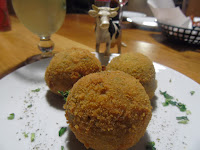 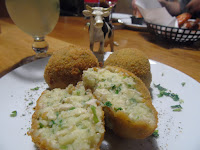 The Boy opted for – you guessed it – chicken wings. Everywhere we go, he always gets chicken wings. I think I’ve mentioned it before. He certainly tried them at Grillstock, Crafty St Martins,  1901 – The Turkey Cafe, and Coast to Coast. Anyway, he opted for the buffalo sauce and received three jointed chicken wings (that would probably count as 6 anywhere else!) They were a good size and joyously sticky. Served with a creamy blue cheese sauce and cooked to perfection they were juicy and spicy and he couldn’t help but to get stuck in. A happy Boy who said they stood up well to the extremely high bar he has set since all of his Californian chicken wing experiences, something he is always striving to emulate. 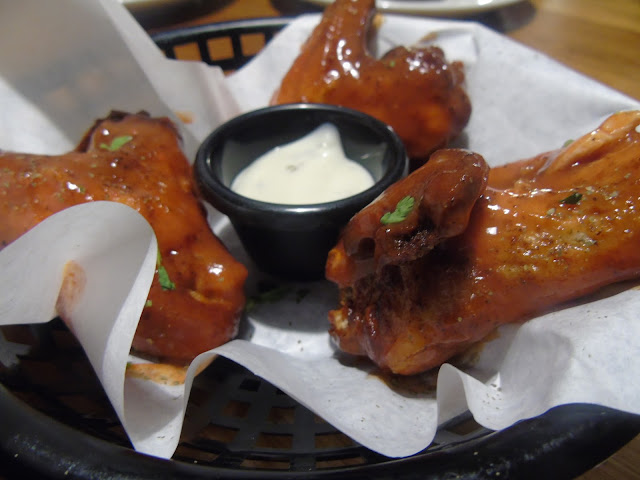 On to the mains and naturally I had to select something from Steakout’s #BackingTheBlues menu, which will be running throughout the summer in celebration of our fabulous football team’s achievements this season. It was a tough choice for me. I was deeply tempted by the Sizzling Schmeichel – a new loaded platter with chicken breast, rice, chips, vegetables, fried onions and a side serve of gravy. You can see why I would fancy that, right? After taking advice from the wonderful manager, Saera (a real force of nature, giving the most attentive service I have ever seen to every single table in the place) I opted for the Vardy Burger – a gourmet burger in a brioche bun anointed with garlic butter, with fried mac and cheese ‘burger’ on top, with gooey cheese sauce, salad leaves and a fat slice of tomato. And cheese of course. You can never have too much cheese. 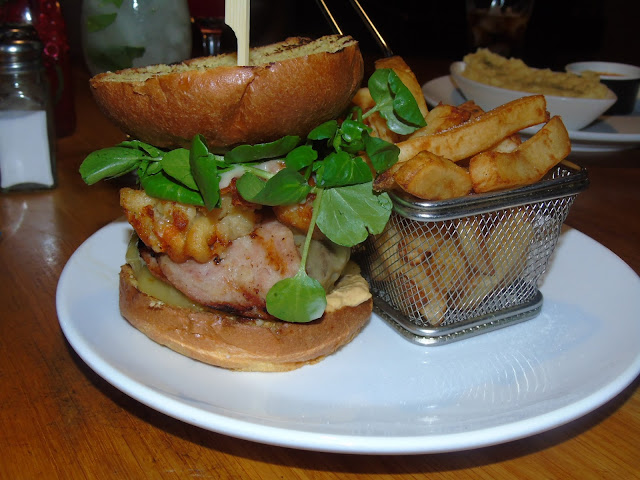 It came with the biggest serving of chunky, skin on chips I have ever seen which were beautifully fluffy inside and crisp on the outside. The whole thing was quite a sight I’ll have to say. I requested my burger be served medium and so it was done. Juicy, really great quality meat that was full of flavour. The whole thing was pretty magnificent but just huge! I also got turkey bacon on mine, cos, well, bacon. Magnificently decadent is the only way I can describe it. Not a single area for me to find fault. 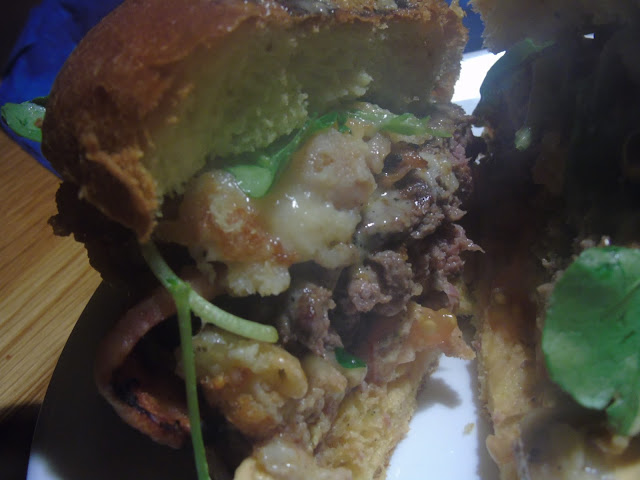 The Boy knew that he had to stake his main on the steak at Steakout. It would have been rude not to. And the Philly Cheese Steak was the obvious choice. He went for the smaller 8oz steak, sliced and served on a bed of fried onions and topped with melted cheese. At Steakout you can opt to have your steak plain, just with a light seasoning and salad garnish, or you can go the full Steakout – marinaded in a spicy African braai recipe and served on a sizzling platter. Of course he went full Steakout and complemented the inherent flavour it added to the steak. The steak was deliciously tender and full of flavour – a really fantastic quality steak that was handled with care and served delightfully rare as he had requested. 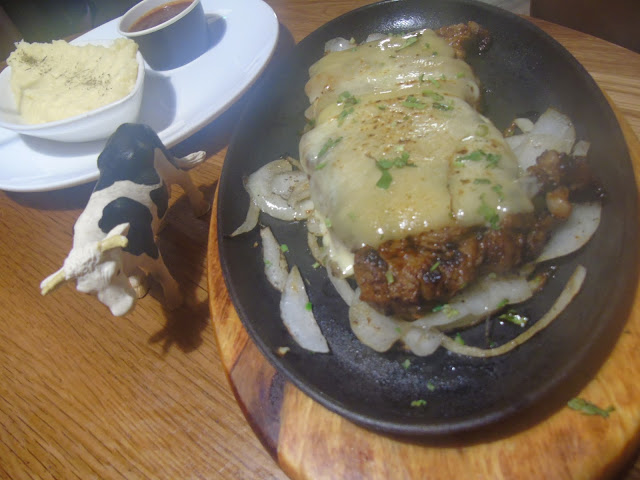 Each steak or grill comes with a complimentary sauce and side. Again, he took the spiciest option the Steakout Hot and Spicy, which was sticky and punchy. He also got the garlic mash as a side which was delicious! In fact I ended stealing quite a lot – it was creamy and jam-packed with garlicky flavour. I adore garlic mash, it could well be one of the greatest comfort foods in the world.

Again, a massive portion – he was really pleased he didn’t order the larger, 12oz steak as there would have been no way he could manage it! It’s not all meat though – veggie’s are well catered for with cheese ball, deep fried mozarella and onion ring starters followed with options for salads, veggie burgers and penne arribiata for mains… In fact Steakout is well placed to cater for a range of lifestyles and tastes – their no alcohol and no pork menu means that it is friendly to Muslims, although as with everywhere in Leicester they are well-frequented by people of all religious backgrounds! If spicy is your game then you can get it here in spades, but lighter meals and more subtle flavours are also available for those with a more delicate palatte. Whatever your taste, their menu is big on flavour.

With such a chilled out atmosphere (family friendly too) we just had to sample the dessert menu – even though we needed to take a short rest break to clear some room for it! We opted to share a Squirrel Sundae, which you may guess was full of nuts – hazelnut gelato, nut syrup and a sprinkling of fresh nuts made for a delicious end to the meal which was messy and sticky and unsurprisingly ended up all round our mouths, over our fingers and quite a lot dripped on the table. There is no way to eat a sundae of that magnitude with dignity. 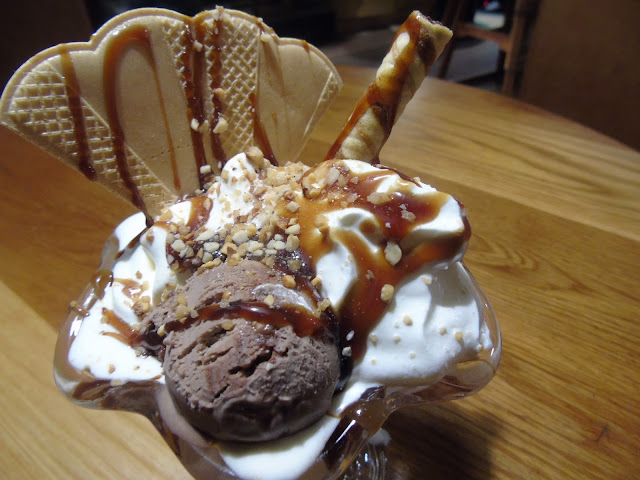 Thanks to Saera and the Steakout team for inviting us along for such a wonderful slap up dinner. It certainly hit the spot that other grillhouses in the city have not! It’s always a pleasure to see a Leicester venue that sources excellent meat and uses fresh ingredients to make something delicious!