Mastodon Dinner and a Movie at the Phoenix ⋆ Laura Hadland: The Extreme Housewife
Skip to content

Dinner and a Movie at the Phoenix 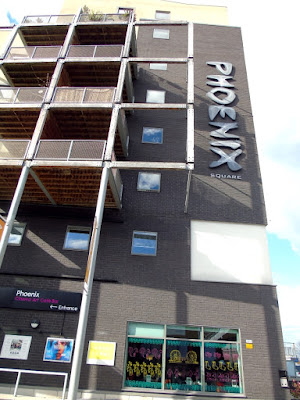 It was a real pleasure to be invited along to review dinner and a movie at Phoenix in Leicester this week. The Boy and I head over there quite regularly for one thing or another, but ironically not very often for a movie. When Phoenix left its old location on Upper Brown Street, there was some consternation amongst locals. However, I have always found the purpose built building on Midland Street, occupied since 2009, to have great facilities and be just as good, if not better than the old theatre – which is now the Sue Townsend Theatre belonging to Leicester College.

Anyway, Phoenix combines arts centre with independent cinema providing a lively programme of creative classes and exhibitions, as well as indie and blockbuster film. Their main focus for art and learning seems to be digital technology and photography, so if its film-making or lo-fi photography that grabs your attention then this is the place. Of course, it’s also home to the annual Festival of Zombie Culture, which will be celebrating its 10th anniversary if we see it back again this year.

As well as all of these interesting artistic and cultural ventures, Phoenix is home to a jolly nice cafe bar and it was this that we were invited to roadtest for ourselves. I was pleased at the opportunity as we’ve only ever stopped by the bar for a quick drink after an event in the past, we hadn’t eaten there, although I had always thought the food looked pretty good. 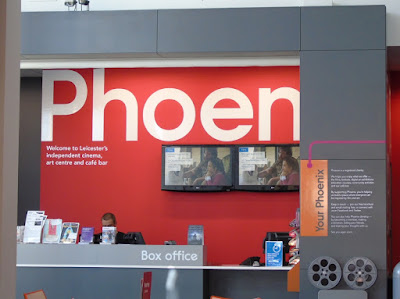 I was not disappointed. Their standard menu is quite regular sounding cafe fare, albeit with delicious sounding flavour combinations – brunch, flatbreads, sandwiches, salads and burgers – but think Cajun, Moroccan and Mediterranean ingredients and spicing styles on offer. In addition to this reasonably priced and very delicious sounding menu, they also have a regularly changing specials board, which is extensive enough to be a full menu in its own right.

Throw into the mix a children’s menu (including the option to get small portions of the adult specials, which I think is so important – allowing kids to eat the same as their parents) and some mouthwatering cakes and treats also being available and it’s actually got a surprisingly comprehensive food offer. 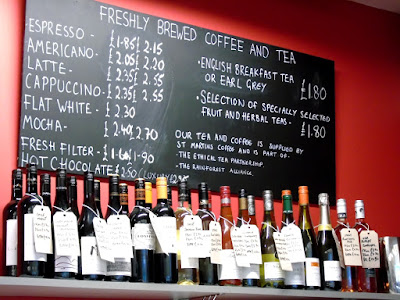 They also have a wide variety of drinks on offer – including Leicestershire’s Langton Brewery beers both in bottles and on draught, a wide selection of international beers and wines and a good menu of locally roasted St Martin’s Coffee and other soft drinks. 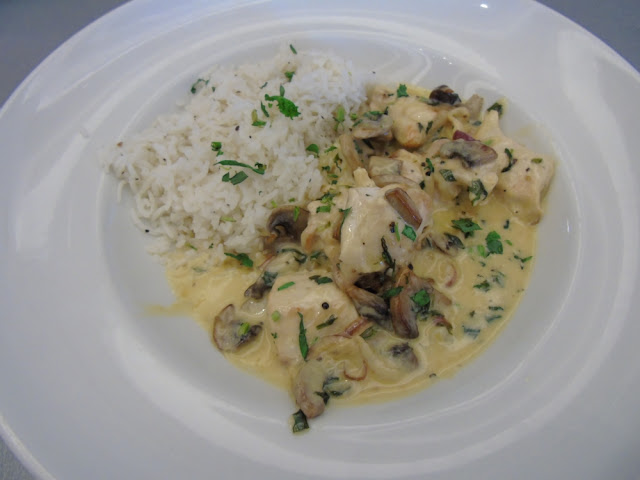 The Specials board held the greatest appeal for us. I opted for the Tarragon Chicken, which was lightly cooked in a creamy sauce with mushrooms and red onion, served with fluffy white rice. The chicken was soft and the tarragon flavour came through really nicely, providing a great complement to the earthy mushrooms. This was a dish I felt to be of a high restaurant standard and was presented simply, but appetisingly. Good food, cooked well. 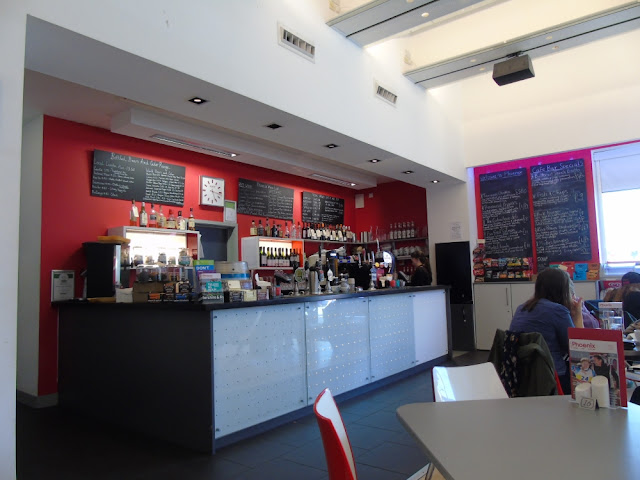 The Boy went for the Caballero Deli, with a side of fries. This was a spicy Mexican style sandwich with spiced chicken, chorizo, cheese and jalapenos on a Gallego bread which was beautifully soft inside and had just the right crisp on the crust. Served warm with salsa, the sandwich came with a mustard dressed salad.

He was more than happy with the gooey, unctious filling, although not quite spicy enough for his (albeit unreasonable) tastes he said it was a satisfying dish, with the fresh, crisp salad being particularly satisfying because of the obvious quality of the ingredients. The humble deli sandwich, made super yummy. 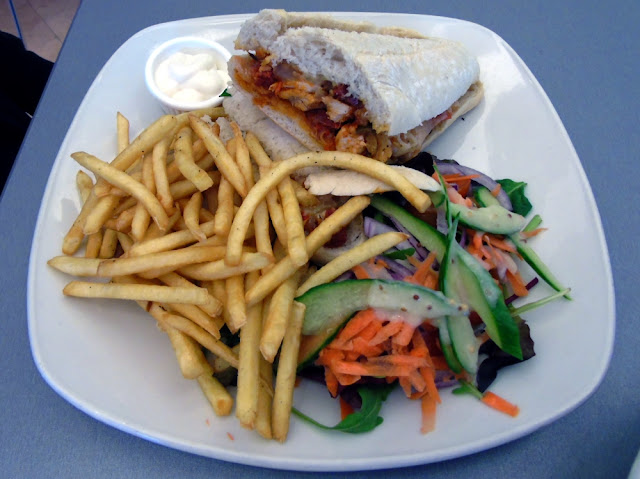 After we had eaten, it was time for our film. You can get a film ticket and a meal on special for £14.75 or £13.25 concessions which we both agreed was a great deal and a lovely evening out that we will certainly do again. They have lots of other offers too – a free loyalty card that gets you money off tickets, or paid loyalty schemes that provide free tickets and ongoing discounts in the cafe. Check out their website for more details.

The cinema screens are, as you would expect, intimate but well equipped. Everything you want from the big screen, but just fewer people to jostle with and talk all over your film. (Other people are there, obviously, just the room is smaller than the bigger chain cinemas, so there are less seats). We watched 10 Cloverfield Lane, which we both totally enjoyed – being big apocalypse (or is it?) film fans. However, I’m not here to write film reviews. I’ll leave that to people who remember what actors are called, rather than just “It’s that one! Out of… y’know… thingy!”

You can purchase all your regular cinema snacks, popcorn, soft drinks and various confectionery, but best of all you can also get your drink from the bar put into a plastic glass and take that in with you. We found the view to be good, the seats to be comfortable and our only criticism of the entire evening was that there is nowhere to put your drink! Cupholders, or tiny revolving trays that you can pull out from the seat arm would be most welcome – especially for folks of a nervous disposition like myself who know they need to put their drink down during a particularly tense scene to avoid throwing it all over themselves (or possibly the person in front) when the inevitable jump happens.

Big thanks to Phoenix for inviting us down to sample their wares. We’ll continue to attend their fun events and workshops, but now we’ll be much more likely to head over there for dinner and a movie too. It was really nice to have great, friendly and very efficient service (the wait for food was incredibly short) in such a relaxed atmosphere. A real credit to Leicester.