Mastodon The Salmon is back, and it's better than ever! ⋆ Laura Hadland: The Extreme Housewife
Skip to content

The Salmon is back, and it’s better than ever! 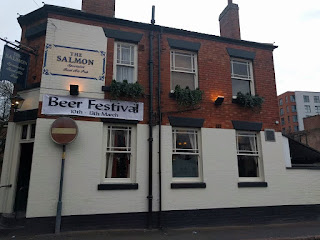 Despite having a pretty decent sun-catcher beer garden, The Salmon scored pretty poorly when we visited last April as part of our assessment of Leicester’s Best Beer Gardens.

This is due in no small part to me and my friends being treated abominably by the old landlord, and it turns out a lot of other people had the same experience. So, after a brief hiatus the old incumbents left and now The Salmon is back and, as the title of this post suggests, it truly is better than ever.

On one of Leicester’s most amusingly named streets – Butt Close Lane – (which is where the town archery butts used to be set up when it was mandatory for men and boys over a certain age to practice their art, in case you were wondering). The Salmon is now part of the Black Country Ales family, the current licensee is John Davis of King’s Head fame (written about extensively on this blog because of their fun beer garden slash terrace and Deliveroo possibilities, but notwithstanding his super awesome friendliness and well kept beer).

Dear Reader, I have heard that this is but a temporary arrangement and already myself, The Boy and a whole host of other locals are up in arms at the idea that Black Country Ales would even bother looking for someone else when he can quite clearly competently (and awesomely) run both. Take note brewery folk! The local people have spoken!

Anywho, the beer selection is epic, and regularly changing, with plenty of local brews to try as well as some more exotic favourites. Indeed, this weekend you can enjoy the Salmon Beer Festival, running as a complement to our very own Leicester CAMRA beer festival and of course a concurrent event at the King’s Head. In fact, why are you even reading this when you could be enjoying so many fantastic beers?

What is more, you can head on over on the 16th of March for a super-duper extra exciting free pub quiz. Oh yes. As if the Leicester Pub Quiz Directory wasn’t enough, now we have an extra one-off quiz to announce. But if it’s popular, who knows, it might stay… After all, who doesn’t want to win a gallon of beer? It starts at 7pm, we’ll see you there. And we’ll kick your bee-hind. So long as it’s not all sports questions, we don’t know anyone who can do sports.

It’s back, it’s friendly and it’s open for more than a five minute window every day (which will only make sense if you tried to go to The Salmon about 10 years ago, but there you are). Another great real ale pub back in Leicester and friendlier than ever. I couldn’t be happier. Plus I’ve been promised that they’re getting rid of that terrible, terrible Jack Rabbit wine and getting something that comes in proper sized bottles. Now I couldn’t be happier.

Get down there and let me know what you think. The beer festival is on until Sunday 13th March 2016. The pub quiz is on Wednesday 16th March 2016 at 7pm. Woop woop!