On top of me having the privilege of testing out some amazing Indian starters as a food pairing exercise with Rothley Wines finest sparkling offerings, and bagging you guys the chance to win some awesome takeaway from Lilu, on Leicester’s Highcross Street, I was also invited along to a Vee Exclusive blogger’s meal where we could try the best their menu had to offer for ourselves.
27/03/16 – One week to go on the competition
Just click here, leave a comment with the correct answer and you’re in the draw!
Lilu has been open for nearly 2 years, and under its present management for almost exactly a year. Owner, manager and deeply committed foodie Pratik gave us an extremely warm welcome and introduced us to the Lilu ethos – fine dining with the best local ingredients, with top notch service and a friendly atmosphere. Sounds too good to be true? It’s not, they actually deliver.

Of course all the best gourmand’s know that if you want the best meal, you don’t just need a starter, but a pre-starter as well. We were treated to crispy potato cakes with a meltingly soft interior and poppadums with a selection of chutneys. I adored the cooling mint and mango chutney, as well as the tamarind sauce which was a perfect balance of sweet and sour.
Once these were devoured, it was on to the actual starters – a kaleidoscope of dishes for us to sample. The Murgh Tikka was meltingly soft chicken, delicately spiced with just a hint of tandoor char on the edges. This was, like all of the dishes we received, beautifully presented and amazingly well cooked.
One of my favourites was the Paneer Shaslik, which was deliciously soft and moist in the centre, but with a delightful crust on the outside. The soft and sweet peppers which had been grilled with it provided good balance to the spiced marinade on the paneer. The way paneer should be, but so often isn’t.
I also absolutely adored the Signature Punjabi Masaledaar Champein – lamb chops with a medium spicing that simply fell off the bone. And into my mouth. Lamb is a meat that I love, but rarely order in a restaurant because when it is done badly it is either fatty and gross or overcooked and dry as a bone. Although these chops were served dry, the meat itself retained it’s moisture and this gave a beautiful texture to the dish.
My fellow bloggers all got a bit enthusiastic about the Salmon Dillwala starter as well – a great example of modern fusion cooking. The delicate pink of just-cooked salmon matched beautifully with the soft saffron coloured sauce and the dill brought out the best in the fish.
Needless to say, it was important for me to try a little bit of all of the starters, purely for research purposes you understand. It was great to see each dish in its entirety and all be able to dive in and try a little of each. You could see that each starter was a great size and each would be really satisfying, and indeed the other guests in the restaurant that evening were clearly impressed with the food they were receiving.
The final dish that we had was the Chettinaad Jheenga, black tiger prawns which had the most heat and also the most char to them of all of the starters. They were served with a coconut chutney which really complemented the sweetness of the prawns and cut through the heat brilliantly. I could probably just eat a big bowl of those. Every day. Until I die. 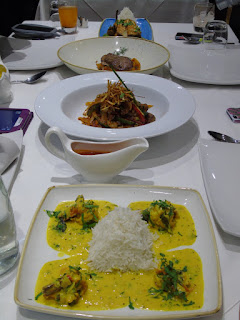 On to the mains and if you thought we’d had a lot of food to try by this point, you ain’t seen nothing yet! The table was quickly filled with incredible meat, seafood and vegetable dishes, along with plain and pilau rice, and a selection of delicious naan breads – some familiar, some not so much! Their two doughy triumphs for me were the Red Leicester naan (why have I never thought of that before??) and the multi-seeded naan. Total fusion of British and Indian cuisines creating something which is more than the sum of their parts.
Along with these super-tasty accompaniments came a delicious rainbow palette of main dishes. I cannot possible talk about anything until I’ve mentioned the Signature King Richard III Hiran Ki Kadhi – venison fillet sourced fresh from our own Bradgate Park (best venison there is, if you ask me), on a bed of slow cooked potato and red onion, and served with it’s own sauce boat of a Punjabi yogurt sauce (and that Red Leicester naan).
Not only was it succulent, delicious and full of interesting flavours which all complemented, rather than overpowered the delicate venison meat, but this dish exemplifies what I really love about Lilu. They claim to be Indian fine dining and while they have peers who claim this also, what you generally get is something, slow cooked in sauce. What we often think of as the generic ‘curry’ but presented very prettily.
Don’t get me wrong, India has this, and it is a good thing. But there is so much more to Indian cuisine. And Lilu, thanks in the main to their award winning chef, Amardeep Singh Anand, know this and give you so much more than just ‘curry’. If they give you carefully sourced venison, then the venison is the star of the dish. Every element is aimed to complement and support the star, and the cooking technique is selected to bring the best from the ingredients. So here you have perfectly seared meat, still tender and juicy, with a slow cooked ragout which gives a great contrast and then a sauce which adds another dimension of complexity – and you can add as much or as little as you wish. It sounds so simple as I write it, but it is not common. It is truly fine dining.
Writing this up is slightly tortuous. I have such beautiful memories of this meal, but I appear not to have any of the food here at my house right now. Sad times. Of course, if you live within 2.6 miles of the city centre, this is not a problem for you, because you can order Lilu through Deliveroo! Oh, how we love Deliveroo. When will they start delivering 3.5 miles from the city centre?
On with the mains then, Frangho Vinha de Alhos up next – a Goan style chicken roulade, again moist and delicious, with cumin roast potatoes which had a superb crisp to the skin and a white wine vindaloo sauce which again came in a separate sauce boat for you to add to your taste. It was beautiful – spicy and full of texture. 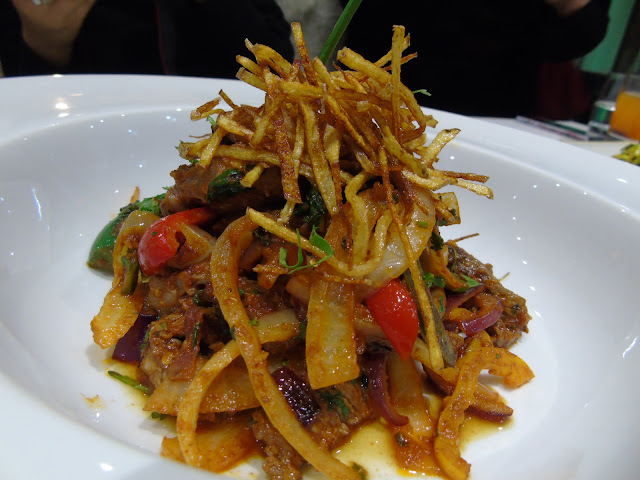 A medium hot Beef Jalfrezi was our next treat. strips of rib eye steak with mixed onions and peppers topped with crunchy straw potatoes and accompanied by a warming jalfrezi sauce. Beware this one – I found it to be perfectly spiced, apart from when I chewed down on a massive piece of chilli that absolutely stopped me in my tracks! I am a bit of a wuss when it comes to surprise heat though…
More prawns next, this time sweet and creamy in their ginger and coconut sauce. I was a little bit obsessed with the prawn dishes we tried, as you might be able to tell and the King Prawn Moilee was definitely up there for me. Again, the quality of the prawns was really the star of the dish and the fact that they had been treated with such obvious care to retain their succulence.
Special mention for the Dal Makhni as well, which was the creamiest I have ever had. That and a Red Leicester naan without doubt must be the only true cure for a hangover that there is. Comfort food at its pinnacle. 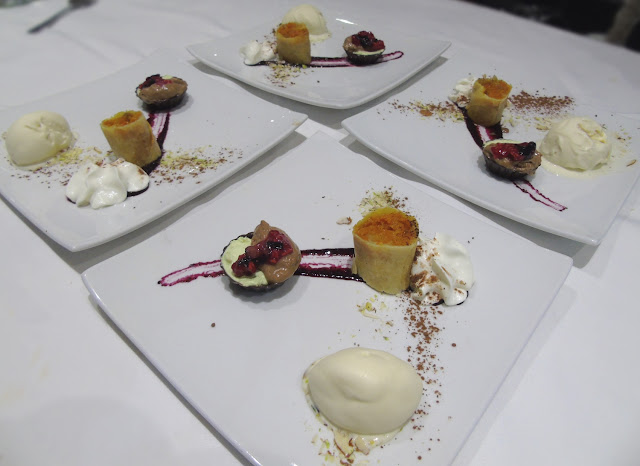 As we were all gently slipping into food comas by this stage, naturally it was time for dessert. We were simply given the Chef’s Choice – a light sampler to allow us to try a few puds without anyone actually exploding due to the sheer volume of amazing food we were trying to cram into ourselves. 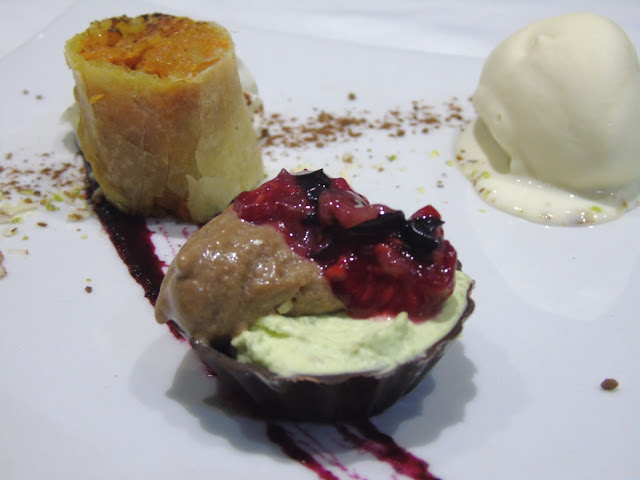 A mind-blowingly creamy ice cream was served with crunchy flakes almonds. This sat next to the proud Halwa – a carrot pudding wrapped in crispy filo and served enticingly warm. These were all dwarfed by the mighty chocolate mousse, served with a pistachio companion and served with fresh berry compote in a decadant dark chocolate cup. My word. I managed to find one of those second dessert stomachs that you hear so much about on Twitter in order to fit it all in.
There you have it. Apologies for anyone who has drooled too much over their keyboard and damaged their laptop whilst reading this post. Pop down to Lilu and let me know how you get on. There’s so much more to the menu even than you’ve seen here and, on the 1st of April they are launching a new menu with even more exciting dishes. Thanks to the Lilu team for inviting us along and being such wonderful hosts.
If you want to see more pictures of the delicious food we tried that evening, mosey along to Sugar Darling?, Behind the Scent and Biba Yusuf to read more!