Whenever I go travelling I always want to do the awesome sounding animal things. Swim with dolphins, stroke a seal, tickle a camel – I want to do them all. But when it comes to it I can’t go through with them because I rarely feel like the experiences would actually be ethical and instead of a warm glow I might end up with a niggly guilty feeling that the animals were having nowhere near as much fun as I was.

So when we were in Jaipur last month I had already discounted the possibility of going on an elephant ride knowing that it would definitely make me feel uncomfortable. That was until I got a recommendation to visit Elefantastic (I know, the name is awful – that’s how they do things in India, the cheesiest names possible) on the assurance that it was a home from rescue elephants and they were extremely well treated. Then I got another, separate recommendation. These all came from either local residents or people who had spent a significant number of years in the city. I felt that this could be my chance to actually have one of those magical animal encounters I had always dreamed of.

And it really was the most amazing day. It started with the complimentary pick up, included in the price, and wonderfully our driver did not ask us for additional money either on the way there or on the way back, nor did he try to take us somewhere random, like his mate’s shop or something. Believe me, this on its on would pretty much have made this a perfect day in Rajasthan for us! Worth mentioning I think.

Once we arrived we were given the first of the seemingly endless supply of perfectly cool drinks (also included in the price) and then we were introduced to our elephant and her mahout. Our elephant was called Tamana and she was 19 years old. I fell in love with her immediately.

We spent an hour bonding with her by cuddling her and feeding her. They can eat around 100kg of food in a typical day, so that is a lot of bundles of hay and green leaves. After about 45 minutes of feeding her this, we moved on to the sugar cane, which Tamana was very excited to get to.

After this we were whisked away to house of the mother to Rahul, Elefantastic’s founder, for lunch. There we were served a very pleasant thali, with a particularly nice daal, great chapattis, some veg curries and a side order of Indian sweets. Whilst we were eating we were entertained by a small pug chasing an even smaller rabbit around the house. That was cute. Then the rabbit tried to get into The Boy’s bag, and eventually gave up, deciding to fall asleep on it instead. It was tres cute.

All the while we were stroking her, looking in her beautiful swirling brown eyes and being intelligently watched back. She loved to be stroked around her eyes and especially under her chin. The tough hair across her skin wore out your hand eventually, but it didn’t matter. She was full of wisdom and beauty. I was absolutely in love. Tamana’s mahout told us the word that the elephants had learned for ‘take’ when she got bored of eating, and I think we were supposed to learn the other commands too, but his English wasn’t too great so he didn’t really understand our questions. It didn’t really matter though, not sure I’ll have reason to speak Elephant again in the future.

After nom noms, it was time for a walk. After climbing stairs to a tall platform, we were helped in the most ungainly fashion possible on to Tamana’s back, with just a cushion and a rope to help us stay aboard this gentle giant. At least it was spectacularly ungainly for me. I have a feeling other people are more flexible and more confident in their ability not to just randomly fall off an elephant. We took a gentle stroll for a very long time, about 45 minutes or an hour I think. My favourite part was closing my eyes and just swaying in the wide gait of her movement, and listening to her whole torso vibrate when she purred as I stroked the back of her neck. Yep. Elephants purr. It sounds like a tiger growl, but louder and more resonant. It’s ace.

After the walk, it was time to give her a wee drinkie – about 10 minutes with the hose filling her trunk up and then watching her pour it down into her mouth. Then it was elephant painting time.

Yeah, this is kind of where it gets weird, but I was assured the paints were natural colours mixed with a sugar solution so they were fine for my skin and fine for her skin and I have to take that at face value. We both painted our hands so we could put handprints on Tamana and had no irritation or problems from the paint (this was to show that she was now actually Our Elephant. I wrote my name on her ear as well, just to be sure.)

Of course, we had to make her into an official Anarchist Elephant, so she got a circle A on her head. And a CND symbol for good measure. And all kinds of swirls and stuff. And since I already thought that she looked nicer before and we shouldn’t have painted her at all, like other people who just had more cuddling time, I wrote the blog name on her side. It’s a good picture. She didn’t seem to mind being painted, but she preferred being stroked which she made plain by nuzzling me with her trunk until I stopped and scratched around her eye and talked to her some more. 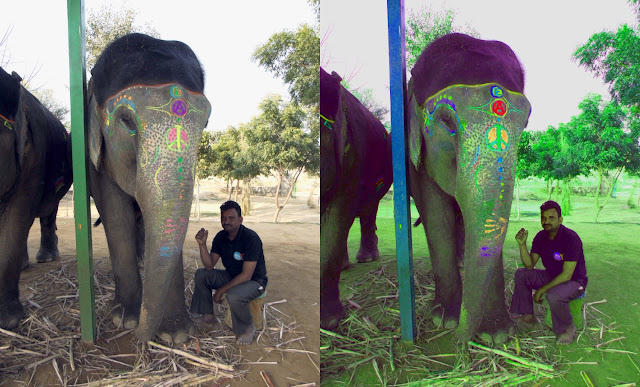 At this point, in the summer you would then bathe your elephant and clean the mess you’d made of them, but as it was winter (a mere 28 degrees) we could not take them into the lake – it was too cold and could make them sick. It made me pleased to hear that we were not following the ‘official programme’ for the elephants’ benefit.

And then it was time to try and tear me away. I had the most wonderful day, heard great stories about elephants that had been rescued from mistreatment in circuses and other undesirable environments. The elephants were well looked after and content. Of course, they would be better off wild but I assume they could not go back. Their mahouts were clearly intimately involved with the animal in their charge, even sleeping with them in the spacious sheds. I feel that it was the best environment I could hope for to have such an experience and it was probably the best thing I have ever done.