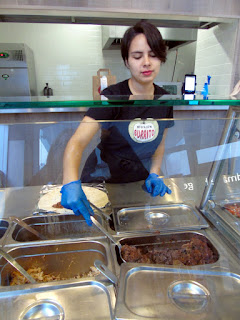 We were invited down to Leicester’s Highcross this week to do a little write up of Mission Burrito, which has been open for about 6 months now. It’s in the same lot that was occupied by Chilacas, another much loved Mexican place which sadly closed down and they offer much the same menu, except, I have to say, they are much more generous with their fillings…

The decor is also much cleaner and more contemporary than under the other store. Mission Burrito keep their menu simple, their lines clean and they have moved the counter to the back of the store so you don’t have to queue out the door when it’s busy. And it does get busy, it’s clearly both a popular choice for lunch and after-work bites.

So, simple fast food, made fresh while you wait. It’s very easy. Pick your poison – a burrito, small burrito, rice or salad box or soft tacos (corn or wheat), Next you decide on your filling – spiced chicken, carnitas (pork), Ancho chile beef or the veggie (lots of sauteed peppers and onions).

I am an avowed carnitas fan, so this time I decided to go for the chilli beef, just to mix things up. And it looked delicious – a really deep colour that showed the slow cooking and the spice. Once you’ve made these big decisions, you just keep working your way down the line, picking your additional ingredients. 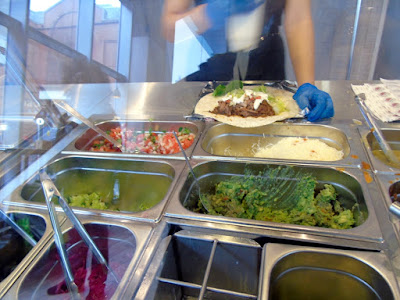 Although a massive black bean fan, I always end up turning them down because I can’t resist pinto beans with bacon. They need to start doing black beans with bacon in, that are more a paste than beans anymore. Like what Mexico do. Mmmm… Beans.

Then it’s on to your salsa, your sour cream, your jalapenos, caramelised onions, lettuce and the like. Next you decide what species of sauce you would like – the Salsa Verde or wuss green sauce version, which of course is my choice, Then you can have normal levels of spice, with the chipotle, or the blow-your-head-off habanero. Well, I don’t know if it’s that hot, but it’s certainly got a kick to it by all accounts. If you’re not sure which one you want, they have a fresh basket of tortilla chips out for you to have a little taste. 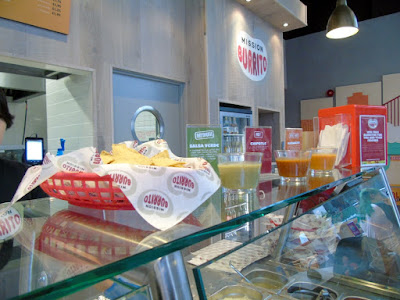 Sauced up you can add your extras – cheese and guacamole at a small extra cost. And to be honest, why wouldn’t you. Then it all gets wrapped up (or not if you’ve ordered tacos) and put in a basket and away you go to pick your drink. Or you add some tortilla chips and dip and then get your drink. They have a nice selection of Mexican beers which exactly replicates the options that you’ll get in any self-respecting Californian taqueria. I opted for the Pacifico, a light Mexican lager. Mainly because it reminds me of Californian taquerias, as I previously mentioned. You can also try one of their excellent range of Mexican sodas. Mmm. 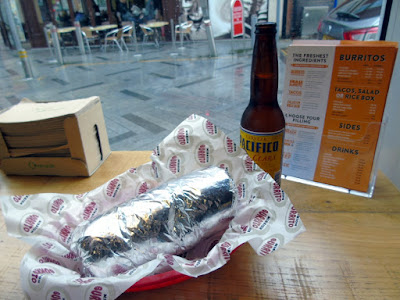 There I was, sat with a burrito that was essentially the size of my forearm. It was gooey and delicious, with all the flavours melding perfectly. My only tiny weeny complaint was that some of the avocado in the guacamole was a little unripe, so it contained hard slices instead of the soft, slightly textured dip-like stuff I’m used to. But it is January, so I guess it’s par for the course.

It’s messy and it’s far too big to get your mouth round, so all things considered it’s a deeply pleasurable experience. The Boy opted for the four soft corn tacos, which were even more crumbly than my burrito and he was complaining that they didn’t have any forks, so he made more of a mess of himself than I. There were forks, he just didn’t use his eyes. Fear not folks, Mission Burrito have forks. Well, more like wooden sporks really, but they are there. My burrito was so massive that I couldn’t finish roughly the last quarter – just a small burrito for me next time. But naturally the Boy was happy to help me out, so nothing went to waste!

All in all, a very fun lunchtime was had by all. I posted a picture of the Boy’s tacos to Swarm (it used to be Foursquare, it’s great for remembering all the good food places you’ve been – get it, let’s be friends) and one of our friends who lives in Mexico City commented on it saying “Wow, looks like real tacos!” And you can’t get much better recommendation than that now, can you. 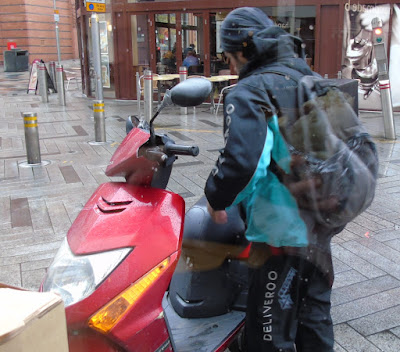 I can heartily recommend you pop in. Or if you can’t be bothered, but you still want to eat it, then you can hit them up via Deliveroo. This is obviously a popular lunch option as two drivers stopped by to pick up orders in the short time we were there. No frills, no fuss, just yummy. Thanks again to Mission Burrito for inviting us along and shouting us dinner, much obliged y’all.