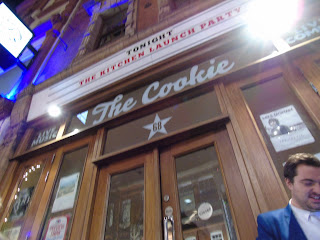 Remember I told you all about the new eateries and hostelries that are opening in Leicester in the next few months? Well, one of them, The Kitchen at the Cookie (website under renovation at the time of writing), is now open and they very kindly invited us to their launch this week.

As you would expect with the Cookie, it was a boisterous and light-hearted affair. The Cookie has made its name through the many faces it has developed – cosy coffee shop by day, and comedy venue and cocktail bar extraordinaire by night.

It was certainly in the mood to party when we arrived, with many revellers already enjoying the celebration and whetting their whistles. There were plenty of familiar faces there – lots of local bloggers and media types as well as some of the Cookie’s many, many friends.

We settled in with a drink on the main floor whilst tasters of Nick Towarianskyj’s new food menu were brought round. The menu feels like it has kept some of the American flair that was on the old menu but The Kitchen now has some British classics in addition.

First we tried their Mac and Cheese, an American classic that was lavishly served with red cabbage and lamb’s lettuce. I really enjoyed the thick, unctious sauce which was packed with cheese flavour. For me it was a tad underseasoned, but that’s easily resolved. Perhaps my palate is a little too attuned to the American style of mac n cheese as I seem to remember that’s been my issue with this dish at other venues in the past. 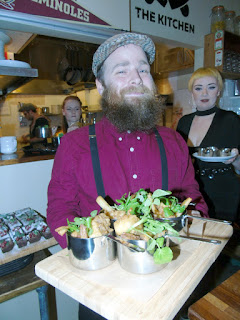 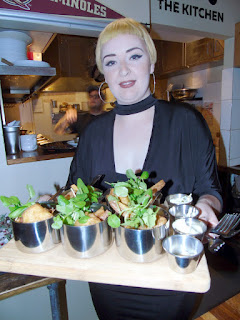 Next, cute little pans of fish and chips were brought round. This was the highlight dish for me – I presume the chips were triple cooked – they were beautifully fluffy in the centre and crisp on the outside. The fish itself was moist and flaky with a really light and extremely crisp batter. The homemade tartare sauce it was served with was also just right – creamy with just the right amount of tart punchiness. All in all, I couldn’t think how it could be improved (except for going back to enjoy a full sized portion of course).

We also had the chance to try some of the hot sandwiches which will be on offer – another real nod to American cuisine. The Reuben was not really to my taste, it’s a sandwich that I would never usually order and I felt it was a little under-filled compared to what I would expect. In contrast, I found the Buffalo Chicken to be really on point. The hot sauce had that great Louisiana kick which balanced out nicely with the blue cheese sauce. Definitely something to pick you up on the cold winter days we are experiencing at the moment.

The thing that really got me about the sandwiches was how surprisingly delicious the bread was. To be honest, I don’t know specifically what bread they use, or where it is sourced, but it was full of flavour and absolutely toasted to perfection. With relatively simple menu items like this, it is the quality of the ingredients and the attention to detail in the preparation that really makes it and clearly the new chef has this down. 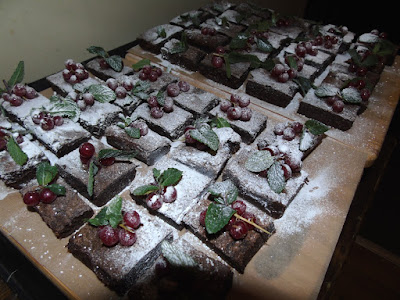 Finally, we finished with a gooey and delicious brownie – richly chocolate, the perfect texture of the brownie itself was heightened by an occasional nutty crunch and the fruitiness of the redcurrant garnish cut through all of that richness really well and made this a really satisfying dessert. 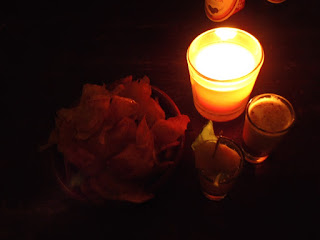 Along with the new Kitchen flexing its muscles, the rest of the Cookie was also showing what it has to offer, with The Attic upstairs giving tasters of its gin based cocktails which went down so well that we were ordering more – and I saw that the bloggers couldn’t resist having another try as well! 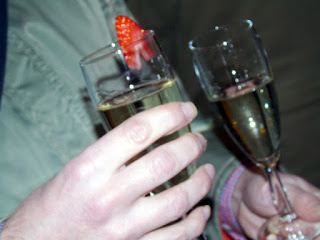 So the Cookie retains its independent and fun character. The service continues to be only with a smile and the new menu has a lot of appeal. A couple of people who I spoke to before the launch asked me to post the menu – so here’s a teaser of one side for your perusal to give you an idea of what’s on offer and the pricing. It seems to be about the same sort of price as in other independent restaurants and coffee shops and I think the same level of quality, so when you’ve popped along let me know how it stands up to the competition. I see they have a selection of burgers – the most bitterly fought contest in the city right now. Perhaps I should do a best burger competition?

Don’t forget to check out the comedy offerings at the Cookie for this year’s Comedy Festival too! There is something to suit every pocket with lots of free comedy and Pay What You Want gigs, all the way up to £16 for Mark Watson. Who is awesome. 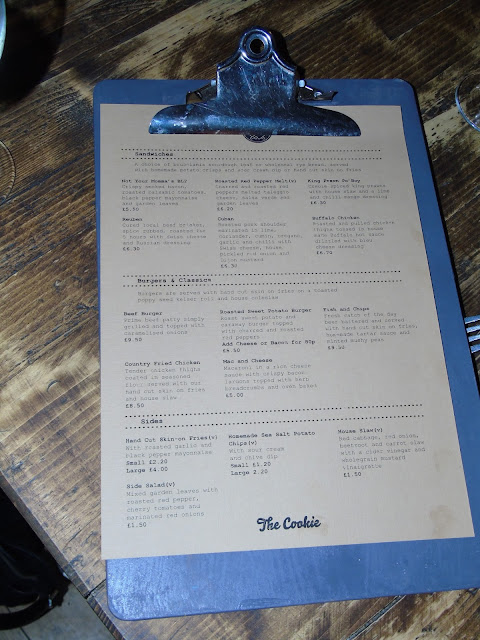