Well I only went and won myself a competition! Peter‘s pizzeria offered a caption competition over Christmas and my incisive wit and pizza/rugby based puns clinched the prize. I know, you’re all pretty surprised by that. Me too!

Not only did we win a ball signed by some of the Leicester Tigers players, but we got to head in to the pizzeria and have a go at making our own pizza with them and then enjoy a delicious meal afterwards. What a treat!

So we duly headed over at the allotted time and first off we were treated to some delicious bruschetta with amazingly fresh tasting tomatoes. We were encouraged to dive in as soon our hands would be too covered in flour to eat it. 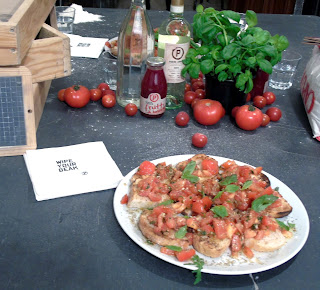 We were each given our own mound of flour to inexpertly flap about with while Peter’s owner, Giamba, took us through his wisdom and knowledge about pizza whilst also having a bit of an impromtu quiz about pizza and Italy. Sadly, all the other teams had Italians on their side, while we were a solely Gringlish team – English and Australians only – so we were at a distinct disadvantage. We came royally last, but hey, it’s the taking part that counts right? 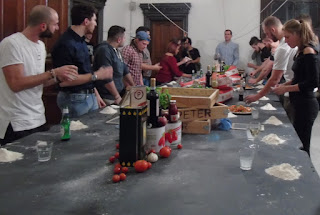 We diluted the yeast and kneaded our dough and this was our gift to take home (The Boy made me a delicious calzone the next day – great skills!). After this we had a mess about with some proved dough, learning the secrets of stretching and throwing the day to create the signature Neapolitan style crust – paper thin in the centre and thicker on the outside, to create a well to hold all of the delicious filling.

After that, well it all descended into a full out dough throwing fight really as we were encouraged to throw our dough to our neighbour, whilst simultaneously attempting to catch that being thrown to us from the other side. I can genuinely say I haven’t laughed so much in a long time. You can book your own pizza-making party with both the Leicester and Loughborough venues and I would heartily recommend it. 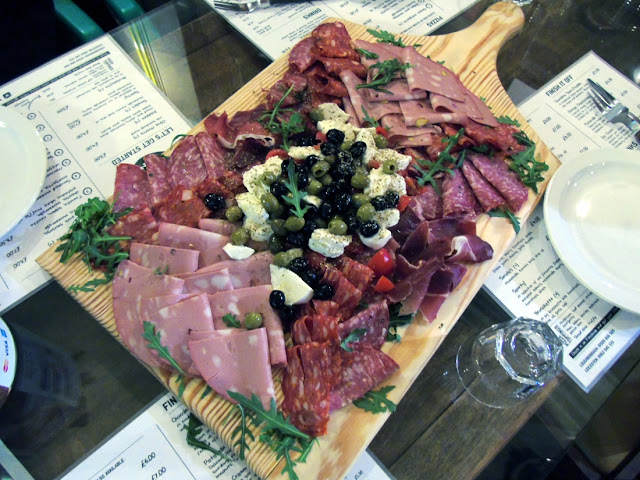 After all this excitement, it was time for dinner and first we were served up the most amazing plate of cold meats that I have ever seen in my life. This was literally heaven on a plate for me – I cannot imagine anything I would rather eat so I was totally happy.

Following this we all chose from Peter’s menu of signature pizzas. Having spotted this month’s special on their Facebook page earlier in the week, I knew exactly what I was going to order. No contest, the white pizza with avocado and parma ham was my choice and I was not disappointed. I have never had avocado on a pizza before and its delicate creaminess is just a perfect complement to the mozzarella and salty ham. 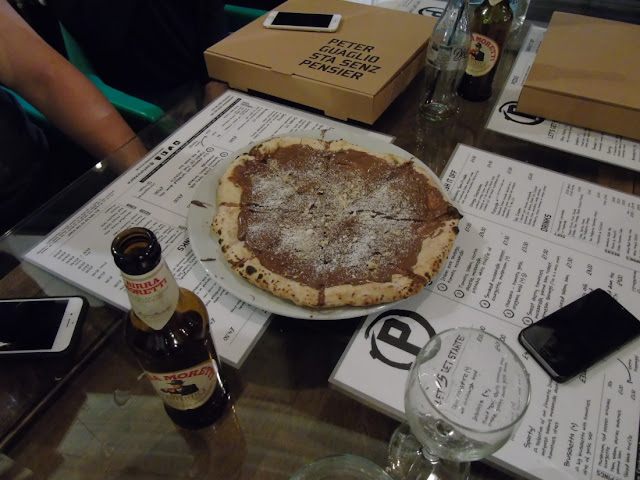 Although significantly full at this point, it would have been churlish not to take the opportunity to try the much-heralded Nutella pizza. Sweet, sticky and jaw-stickingly epic, it is probably worth going down just to have this on its own. I think that would be a definite alternative to coffee and cake with a mate. And so we were done. Much fun was had by all and we waddled home with full bellies.

Thanks to Peter’s and to the Leicester Tigers for such a wonderful prize. More on the rugby ball later, I have big plans for it!