Burgers and Brews at The Paget, Loughborough

As #Tryanuary draws to a close I’ve got one more special tip for you to try out. Pop into The Paget for a warm welcome, a great selection of local brews and some fantastic burgers. We first came across The Paget at the UK Burger Battle last year. I absolutely adored their burger, but as they are based in Loughborough, it’s taken us a little time to get over there in person.

One of the great Steamin’ Billy Brewing Company family of pubs, you know from the get go that good quality beer and locally sourced items are going to be the order of the day, and we weren’t disappointed. We went on a Tuesday evening to enjoy their legendary open mic night and I was blown away by the fabulous saxophonist who performed there. It’s a great atmosphere as the clientele are a nice mix of locals and students – neither focused on one nor the other it appears to be equally welcoming to all. 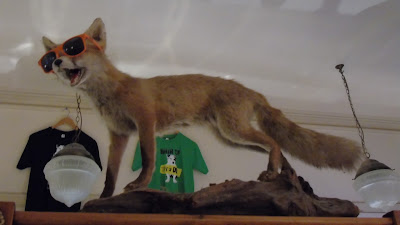 The decor fits the atmosphere, being fun and frivolous, with a Leicestershire fox sporting a pair of sunglasses being my personal favourite touch. Like many of the Steamin’ Billy pubs, it’s a very traditional pub building, with bar and lounge area so you’re bound to find some seating that suits you. They also have a very fine beer garden and plans to take it up a level in the new year, although it being January I didn’t spend that much time out there.

But you want to know about the burgers don’t you? Mmmm… burgers. Their menu is called Burgers & Brews. They only do burgers. And they do them well.

We had headed out with Liz from Rothley Wines, who you can see below determinedly man-handling the tommy sauce. She declared that her lamb burger was one of the finest she has eaten. A woman with good taste, as you would expect The Paget is now selling her elderflower wine, to demonstrate what good taste they have. 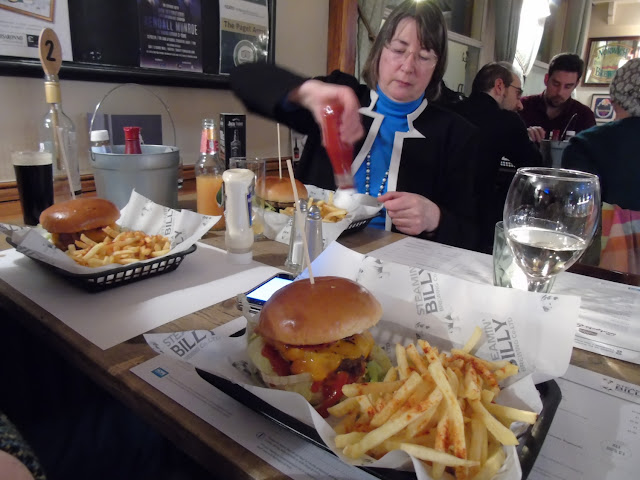 The Boy had The Inferno, which despite the threats of ‘homemade scotch bonnet relish’, ‘Sriracha hot chilli sauce’ and the like was declared “Not Too Spicy” and consumed with all haste. As it was The Boy’s birthday meal, he also added bacon for a pound. Indeed, the only grumble I heard out of him all evening was that there were not enough burgers on offer with bacon on them. He wants everything in the world to have bacon on and I have to say, when it comes to meat in bread I am inclined to agree.

I myself had the Mediterranean. This is a 6oz patty with lettuce, relish, mustard and a spicy tomato ketchup which had a delicious kick to it that I really enjoyed. It was served with melted Red Leicester (love the local) and according to the menu ‘slices of grilled chorizo’. So I was expecting thick wodges of deliciously charred paprika goodness and was a little put out that I was actually served wafer-thin (in a Monty Python accent) slices of rather sad deli chorizo. I guess this is where we get back to the whole ‘how would you like the meat served on your meat sandwich’ issue. I don’t know, is that a fair criticism or is that just me?

Anyway, this slight disappointment was not enough to mar my overall enjoyment of the experience. The brioche bun was rich and substantial enough to contain the goodness within, without being cloying. The burger itself, with meat freshly ground daily on site, was absolutely perfect – juicy and just the right side of medium and full of delicious beefy flavour. There was tonnes of gooey cheese and the combination of spicy sauce, relish and mustard meant it truly was a burger that you have to just get stuck into and damn the consequences. It was served with seasoned fries which were crisp and tasty. All the burgers clock in around eight quid with fries, which puts them at a very competitive edge to other places locally which serve food of this awesome quality, so I think I can declare myself a happy bunny. 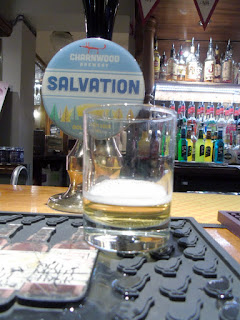 And of course, in honour of #Tryanuary (as well as trying a new local bar of course) I had a sample of Charnwood Brewery’s Salvation. We had been next to the Charnwood stall at the Loughborough Wine Festival but I hadn’t had a chance to try a sample, so I was pleased to get this opportunity.

I found it a lovely pale gold colour, light on the nose with a slightly sweet start in the mouth fading to unpressured hops and a slight fruitiness. I felt there was a dash of lemon in the back, but no sourness or acidity, instead it was smooth and utterly drinkable. An easy 8 out of 10 for me and a definite one for those who likes their beer flavourful but not overpowering.

Thank you very much to the Paget for inviting us down, and giving us a stonking managers discount which took our bill down to just £13 each with dinner and a couple of drinks. Loverly.