Myself and some of my lovely fellow local bloggers were invited down to Bru on Granby Street this week to sample their new winter menu. You can hardly say no when someone asks you if you’d like to come and try ALL of their cake, can you?

Bru is a consistently popular late night coffee shop which is open day and night for all of your coffee, tea, cake, waffle, gelato, sarnie and pastry needs! They have a vast menu which changes regularly with lots of fun new inventions and flavour combinations and they make every effort to cater for all dietary requirements.

Just in time for the cold weather setting in, Bru have released their Autumn-busting hot drinks with some gorgeous new flavours. They presented them to us on these gorgeous mini tasting platters. For £3.95, you’ll get a full sized version (£3.45 for the latte), in a big grown up glass. You can knock yourself out with a delicately spiced, but flavourful Gingerbread Latte, topped with delicious cream and a super cute, tiny gingerbread man. I called mine Tarquin. Then I ate him. Sorry Tarquin.

Next up we have the hot chocolates – a zesty Orange Hot Chocolate, which was by far the favourite of our group. Never can I imagine a flavour that reminds me more of Christmas as a young ‘un – a chocolate orange was not an annual event, but the years I did receive one were magical indeed. This is the chocolate orange in its purest form, with a slice of chocolatey goodness on the side.

Next we have the Candy Cane Hot Chocolate. I didn’t think this would be up my street as I’m not a massive mint chocolate fan, but actually it was deliciously balanced, with the mint just right as a tasty, but not overly powerful flavour. With the warming, creamy chocolate it was actually just the right balance and I do believe that I would order one again you know! 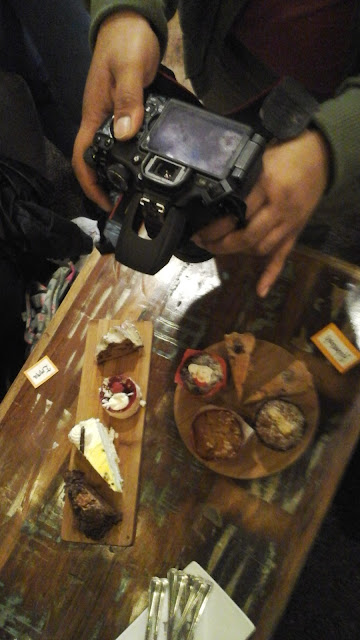 And finally on the chocolate tasting board was the Cookies and Cream Hot Chocolate, back after being the smash hit seller at Bru last year.  It had the most creamy, slightly vanilla taste with a delicious biscuity note and an Oreo on the side. I can see why it was a hit and this would definitely be awesome when the real wintry weather sets in. We were all so taken with the little tasting boards where you could try all of the Festive Indulgences we tried to convince them that they should offer them to all of their customers. I reckon with enough prodding they’ll do it, so let them know in person, on Twitter or on Facebook and don’t forget to tell ’em I sent you!

By this point, I was already feeling pretty full and sugared up, but we were not done yet. Oh sirree Bob no we were not. Next came the platters laden with cakes of all colours, shapes and textures. Just incredible!

There was a huge chunk of chocolate cake, with layers of light, fluffy and eggless sponge interspersed with a rich chocolate cream. This was a similar texture to the white chocolate and passionfruit cake, which sounds an odd combination but I was really impressed with the delicate fruit flavour mixed with a subtle hint of white chocolate – incredibly it was light and not sickly at all. Again, this was an eggless wonder, not that you could tell, so perfect for people with egg free diets.

Next was the raspberry torte which was rich and creamy with a tangy raspberry topping. It was almost too beautiful to eat, but somehow we managed it. I will point out that we shared all of these puddings, we weren’t consuming vast quantities of cake on a conveyor like giant piggies. Well, we were admittedly eating rather a lot of cake. 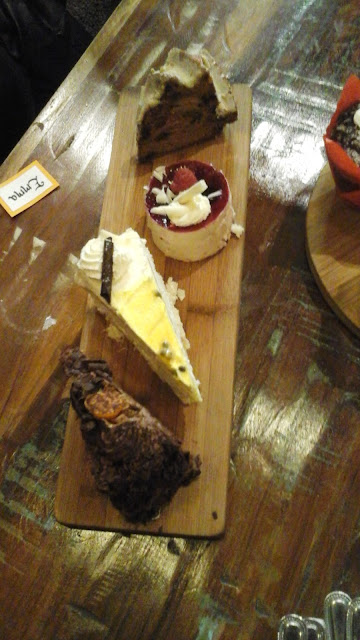 The real flavour of Christmas for me is stollen, it reminds me of the year I lived in Germany when I was little. I love the spices, the currants and the sweetness of the marzipan. I can confidently say that Bru’s stollen passed my authenticity test and I was transported back 27 years to my yoot. Would definitely order that one again! This was matched only by the raspberry frangipane. I adore any frangipane treat and the fact that you can get your cake warm and served with custard at Bru just goes to make it even more super awesome. You cannot beat that kind of almondy goodness. 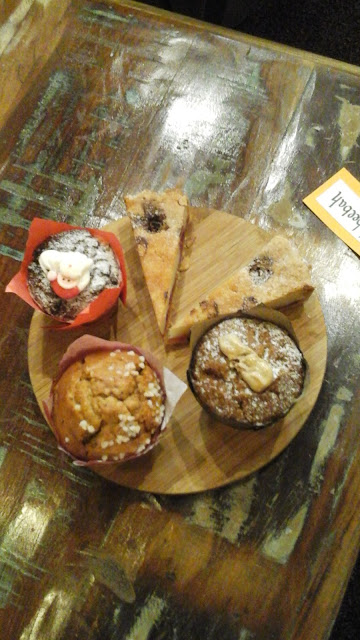 Next up were the muffins. I’m not as big a muffin fan as I prefer something lighter, but muffin fans will love their autumnal flavour combinations – the black treacle muffin that tastes just like a parkin, a spiced fruit muffin with a real Christmassy edge and a Santa topped chocolate muffin – all moist and each their own very special flower. Some of these are filled with complimentary creamy centres as well, so definitely no dry muffins here!

So by this point we were of course all super full but we were on to the marathon stage of the evening by this point, there was no room for the weak and only the strong could survive. They had very much saved the best for last – a very special Leicester collaboration – the Christmas Amore waffle.

The Christmas Amore has been developed by Bru working in partnership with passionate chocolatiers, Cocoa Amore. It features Bru’s signature waffles – made with an eggless dough, rather than a batter, which gives them a slightly denser texture than other, American style waffles. These are the Belgian style and they have wonderfully crisp edges, which adds great texture to the dish.

On top of this you have a full sized dark chocolate brownie – served warm – which is both sweet and bitter, gooey and pretty darn incredible. Served over that is a chocolate hazelnut ice cream, chocolate sauce, a ‘mini yule log’. Yes, I know it’s a flake with icing sugar on it, but come on, use your imagination! And of course, the crowning glory is the delicate chocolate snowflake, shimmering with gold, made especially for Bru by Cocoa Amore. At £6.95, I would judge this to be a two man pudding, although by this point my judgement was slightly askew due to the vast sugar high that I was experiencing and the general flavour delirium that had set over my brain.

What can I say but thank you to Bru? What a delightful evening, what a range of wonders and joys for us to sample! I’ll be bringing friends down to try these, you mark my words. I must also record for posterity the carnage that we left behind and point out that one blogger, who shall remain nameless, managed to drop chocolate cake on her lovely new camera, so eager was she to get it down her neck. Well done that girl.