A week in wine

It’s been a week filled with wine for me, although surprisingly little drinking of the stuff! On Monday I went to the Best of Leicester event where I assisted with a wine tasting session. The results of that tasting have now been compiled and I have the results of what our very willing volunteers at the session thought about pairing the locally produced wines from Kingfisher’s Pool (Rothley Wines) with local food:

Spirit of Freedom (sparkling rose)
Seafood: particularly with scallops – try The Lighthouse at Kibworth.
Whetstone strawberries
Samosas: Participants thought the salty/spicy flavour would make an excellent contrast to the wine, bringing out the best in both! Try picking some up from the street food vendors on Leicester Market.

If you’d like to try these wines for yourself you can contact Liz at the vineyard or pop along to David North’s deli in Rothley. 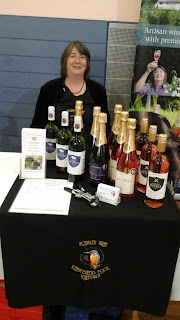 After all that excitement, Liz and I were back out on Tuesday at the Loughborough Festival of Wine. This was an extremely busy evening and we were rushed off our feet with people eager to taste good wine, made locally. Annoyingly, we had been put on a single table with the other two local wineries, Eglantine and Walton Brook, which meant it was difficult for us to have the space to give everyone a sample of the wine and answer all of the questions they had about the vineyard and English wine. It just goes to show that there is a long way to go before people give English wine it’s due credit. You’d think that at a local wine event, the wine grown locally would be put front and centre, but apparently not!

I didn’t get chance to sample any of the wines except for the delicious North Star, Eglantine’s ice wine but I did manage to pop through and grab a fortifying drop of Burleighs Gin super amazing Distillers Cut, which helped to keep me on my feet and dealing with the rush of people who were surprised and amazed by our awesome Rothley-made wine.

And as if that weren’t enough, yesterday I spent the day with a number of other hardy volunteers getting in the Orion harvest at the Kingfisher’s Pool vineyard in Rothley. After a gloomy start, the sun came out on us and we managed to bring in all 10 rows of Orion grapes – over 2 tonnes of deliciousness. It was a really tiring day but everybody absolutely worked their socks off. There are only four rows of Regent, red grapes, left to harvest now. 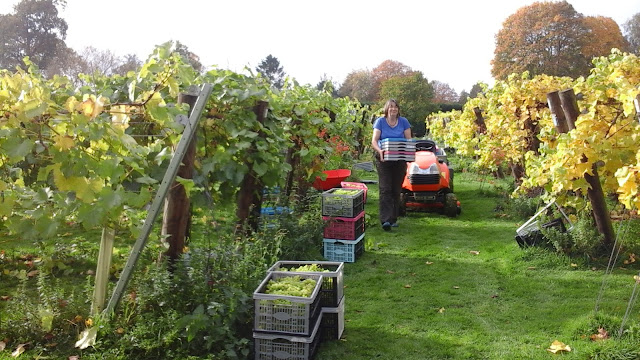 I’ll be sad when the harvest is over as it’s a lot of fun and so exciting to have the makings of a whole new vintage being brought in. However, I don’t think I’ll miss the aching legs and shoulders! It is the busiest time of year for any vineyard, getting all the grapes in and then quickly pressed, so I suspect English wineries across the country are all looking forward to a well earned rest – or at least a good night’s sleep where they don’t have to stay up pressing grapes by torchlight, or clean out equipment!