Well, I was going to make another 100 square metre toast mosaic this week, but sadly the Great British Weather has put the kibosh on the whole thing.

You may remember me from such oversized food art as the Toast Mona Lisa, the Cupcake Cherry Tree of Ultimate Blossom and The Coffee Bean Shop Sign of Extreme Backache.

This time, the producer of a well-known primetime TV show (which shall remain nameless, in case I get the chance to do another one for them in the future) asked me to create a 10 by 10 metre portrait of comedienne and national treasure, Dawn French. It would have been French Toast. It would have been beautiful.

Sadly, the day we were planning to lay it out, in an outdoors location, is the only day that it is due to rain in central London next week. With no alternative indoor location suitable to set up overhead cameras for both the time lapse and the final money shot and no wriggle room in the scheduling, sadly it was not to be.

However, I had completed the first draft of the design and so as not to waste the first 10 or so hours of work I put in, I thought I’d share it with you all. There was still plenty of work left to do to finalise the design. Her hair isn’t quite right, the fringe needs proper definition, and there was definitely a lot of work left to do around the jawline and chin, but it was definitely coming together.

So here she is, the giant toast creation that never was. I hope the lady herself would have found it amusing. Fingers crossed somebody else finds themselves in possession of a lot of the same thing that I can make giant art out of soon. I do love these projects. 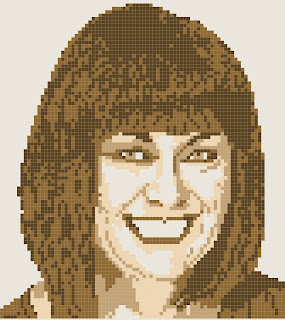