I was invited to a special blogger evening at Lush last week. I accepted the invitation with some trepidation as I am not a Lush shopper on normal occasions. Indeed, I tend to try and avoid it, so overpowering do I find the smell permeating from the premises. Talking with others in the run up to the event I was relieved to find that this is not peculiar to me and a number of other people also tend to avoid, rather than embrace the shop.

However, I girded my loins and realised that I was being ridiculous. I know so many people that rave about Lush’s products that I was honour bound to give it a go for myself. And I have to say I was pleasantly surprised! We were greeted on entry with a huge display of custom cupcakes and a refreshing glass of homemade lemonade and then invited to browse around the colourful displays. 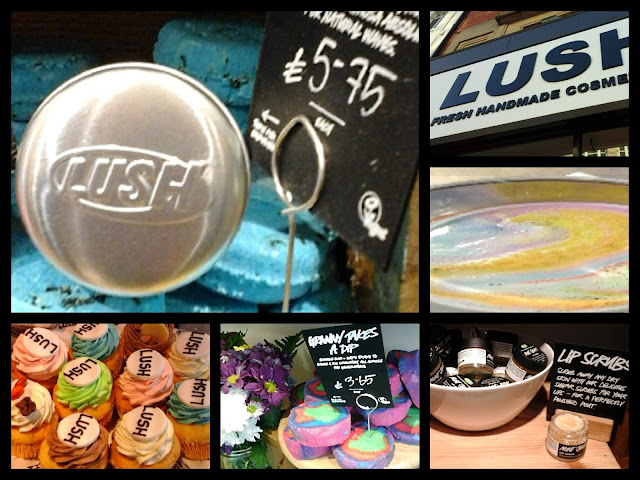 Once you’re actually in the store, the smell is actually rather pleasant! I think that it helps that everything is a bit more in context and as you move from area to area, you can smell all of the different ingredients that make up a certain type of product. Also, lots of things are made on site, so I would think that is what contributes to Lush’s formidable presence outside on the street! Everything is nicely laid out with good information about what is in a product, how to use it and the odd motivational message! I found all of the staff to be really welcoming and friendly and so it was a lovely environment to browse around and chat to the other bloggers who had attended.

Some of the best things I saw were the bar shampoos which you can buy a little tin for. If you ask me, that’s a stroke of genius when you’re travelling as it means you have your shampoo with you without needing to have hold luggage, as it’s not liquid. I was also into the lip scrubs, which have lots of texture coming from sugar crystals which removes dead skin and leaves lips soft and primed for whatever lipstick, balm or tint you want to put on next. I have terrible trouble with dry lips so this is perfect for me. The mint julips was my favourite flavour as I am not so in to sweet cosmetics on my lips, so the popcorn and bubblegum flavours didn’t appeal to me so much. 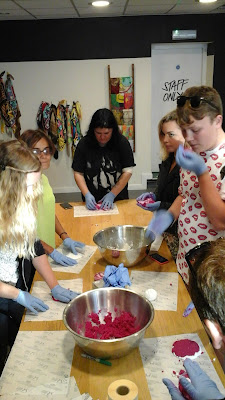 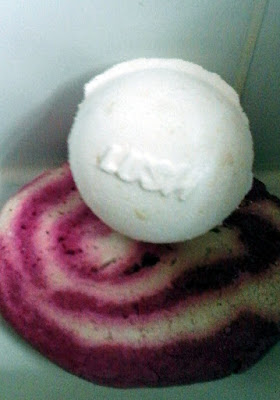 As well as seeing the new products on offer in the store, we also got the chance to make our own bits and bobs to take away. I thought this was really fun and was interested to hear that you can actually hold your own Lush party with friends to make your own products. I think this would be a nice idea for a baby shower or hen party with the girls! 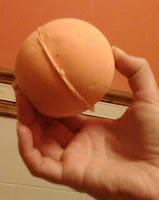 We were also given a goody bag to take home with us, which was chock-a-block with interesting new products to try. I have to admit that as soon as I got home, I drew myself a bath so I could road test the bath bomb that I had been given. The Yoga Bomb was a pleasing colour match for my bathroom, although once it had gone in I decided that it was best to ignore the deep yellow/orange colour it turned the bathwater and concentrate instead on the slight sparkles in the water and the lovely, but not over-powering smell it gave – earthy notes like a watered down hippy shop. I found it very relaxing an it left my skin soft and lightly scented.

I also had a sample of a natural fresh cleanser called Angels on Bare Skin, which looks (and feels) like a cross between nearly set mud and those pencil erasers you got at school, but once you water it down a little bit it makes a soft and milky paste which is incredibly gentle on your skin. Apparently made in a style reminiscient of an old medieval recipe, I particularly liked that it leaves an extremely light, but pretty floral scent to the skin – none of that over-powering smell that I was expecting.

I also got two liquid conditioners, which I am looking forward to trying soon and a really fresh and zingy eucalyptus soap called ‘Outback Mate’. I am really pleased with my sample of the Love and Light hand cream which has just the right amount of Fairtrade Cocoa Butter in it to moisturise your hands nicely without leaving them sticky.

As you can tell, I was quite surprised by my Lush experience. I was really pleased to see the amount of natural ingredients they use and their support of charitable causes, Fairtrade and anti-animal testing platforms.

I was also interested at how many of the products are made freshly, in house by the staff. The store and the products have a nice homemade touch to them and, as you can see from the photos, the shop is wonderfully bright and vibrant.

All of the products I have tested so far were really pleasing in terms of quality and effect, so I cannot complain at all.

Many thanks to Lush
for inviting me along
and for their generosity
in providing such
an exciting goodie bag!