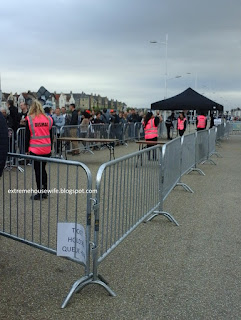 It was a grey and dismal day as we ambled along the seafront at Weston Super Mare this Friday. Pensioners shuffled along, clutching their jackets about them to protect them from the wind. Families sat by the seaside staring aimless out across the expansive muddy beach whilst mindlessly consuming fish and chips, because they know what you’re supposed to do on holiday. The scene was perfectly set for us to take an exclusive nose around the latest installation by Bristol’s own Banksy and 50 or so of his contemporary artist chums. Yes, we were visiting the dystopian, alternative theme park, Dismaland.

We accidentally managed to join the queue for entry at the allotted hour at the front, instead of the more traditional back which seemed quite an appropriate move and also meant that we were one of the first to have our names checked off the list and pass through the security provided by dour faced attendants in high-vis jackets.

The Bemusement Park’s staff are not a cheery bunch and the level of service they provide is perfectly matched to the expectations you have of underpaid, bored service industry personnel across the country. It’s funny because it’s amplified so much, but uncomfortable because you know deep down so many people are trapped in miserable jobs they can’t abide because it’s impossible to get alternative work. Entry-level anarchism indeed. 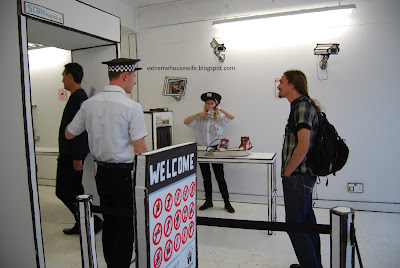 Happily the cardboard scanner didn’t find anything untoward on our persons or in our bags and we were granted entry. We were a little disappointed that the security cameras didn’t have party hats on to celebrate George Orwell’s birthday, but you can’t have everything I suppose, especially not at the ‘UK’s most disappointing visitor attraction’. 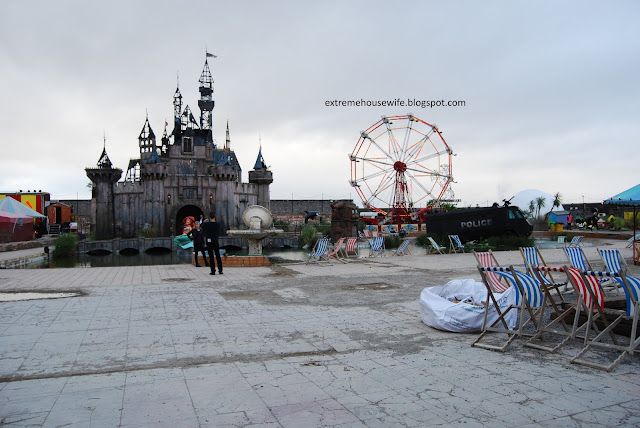 And then we were inside. The shell of the park is the site of a disused lido, Tropicana. Numerous installations have been added to the shell, but little work has been done to the damage left by 10 years of the abandonment. Expect broken paving, dangerous looking sharp pointy areas and a general film of grime. The perfect family environment. The star feature of the site is the burnt out fairytale castle  sat in splendid dereliction in its own muddy moat. Inside the castle, through darkened and mysterious corridors you come out on to an automotive accident of epic proportions – the pumpkin carriage over-turned and broken, while eager paparazzi snap shots of the dead princess within. I’ll leave you all to draw your own Princess Diana parallels. It is an awe-inspiring work. 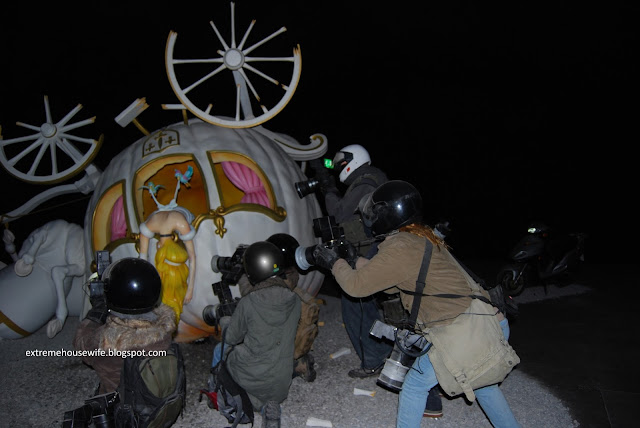 Other large scale installations on the site include the Big Rig Jig – two lorries pirouetting in perfect union which you can climb right upside. It’s dark, a bit scarey and probably downright dangerous in there, but massive fun – especially when I dived right in where many others stuck their head up and then decided to bolt. There is also a Banksy sculpture of a killer whale diving out of a toilet, through an unlikely size of hula hoop, into a small paddling pool, filled with the now familiar muddy water. I’m sure you’ll agree it’s much improved by idiots like me posing with it for stupid photographs. 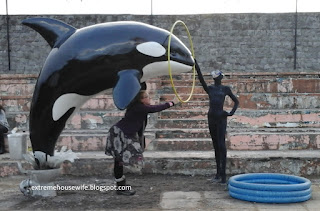 It was this inherent accessibility of the artworks, installed cheek by jowl in every corner of the site that made it so exciting. Beautiful works, disturbing pieces, political posters were everywhere and totally accessible to the visitor. Perhaps there are lessons to be learned here about how art is displayed and how we grant people access to it. The inherent democracy of it all was blatant and wonderful. 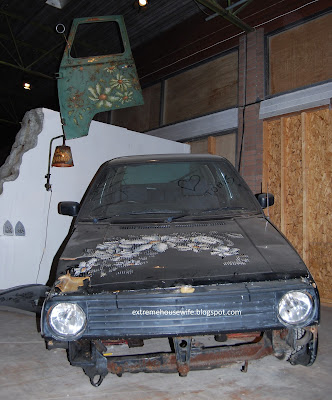 By this time the drinks were flowing at the onsite bars, guests were enjoying a pizza or two and the atmosphere was highly convivial.We decided to take a walk through the gallery spaces, where a number of the artists were on hand to discuss their pieces – an extra special bonus. I have been following the work of Severija Inčirauskaitė-Kriaunevičienė for some time now, and indeed it was a need to have a conversation with her that I received my invitation to the preview. Her pieces take abandoned metal objects, the height of domestic mundanity and add beautiful cross stitch detail transforming them into highly decorative art objects that still retain a sort of air of the broken and forgotten. Remember Derelicte in Zoolander? It’s a bit like that. In fact a lot of the work in Dismaland is a bit Derelicte. 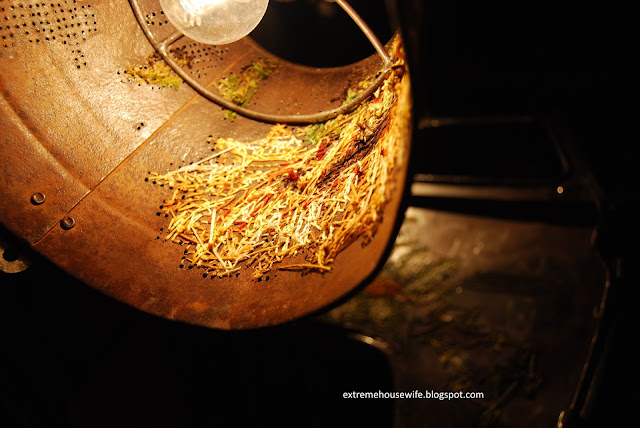 There is a freakshow tent with a creepy animated rabbit who has turned the wand on his master, the magician and for once made him disappear, Damien Hirst‘s unicorn is kept in suspended animation in its tank and Scott Hove‘s snarling cake trophy animal heads are, well, just a bit bizarre. But awesome. Beyond this tent, the main galleries are again crammed full with weird and wonderful pieces, 2 dimensional and 3 dimensional works litter the space, all having been carefully curated by Banksy himself, to the point where he actually manipulated some pieces of other artist’s work to ensure that it fitted in with his vision. 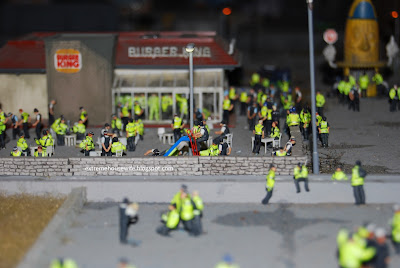 Picking a favourite from this sensory overload is near on impossible but I definitely found something of a soft spot for Jimmy Cauty’s model village – a carefully crafted installation which fills a large room, with the police state greatly in evidence – coppers stand around looking gormless after the fact of numerous accidents and disasters in a tiny urban landscape. The detail is amazing and the overall impact is truly bleak. Magnificent. 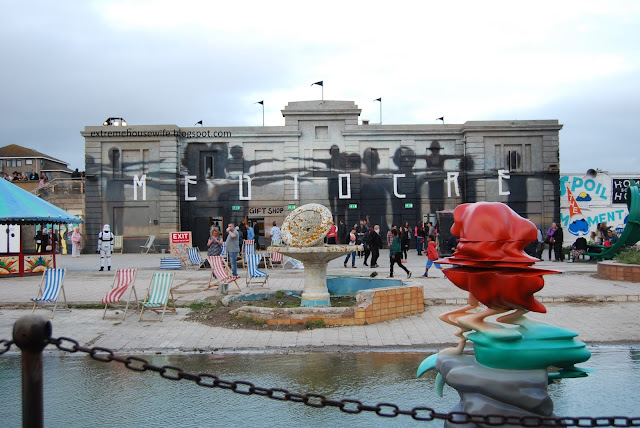 Of course it’s not all gallery spaces and a whooping Death riding erratically on a bumper car. Respectful to the traditions of the theme park, there are of course an array of games and stalls to surprise and delight. Trying to knock over the anvil with a ping pong ball results in an exciting prize – a ‘meaningless rubber bracelet’ from David Shrigley which I will probably treasure until I meet my maker. And who wouldn’t want to Hook A Duck From the Muck to win a fishfinger in a bag? 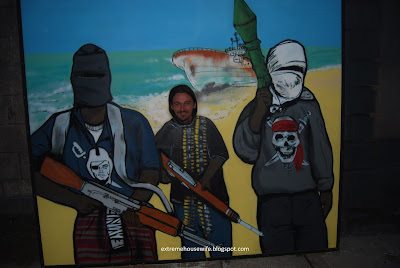 Naturally the traditional photo boards are there, so you can stick your head through and become transformed into a totally inappropriate Somali pirate type affair – nice one for the kids that. I think it was probably the massive attention to detail and quality of finish on the selfie hole which made that attraction so popular with children of all ages, and of course I had to take a memento of the day for myself.

We played crazy golf in an oil slick, and enjoyed chatting with the actually genuinely friendly chaps down at the Comrade’s Advice Bureau where you can pick up some anarchist literature, grab a useful kit to help you put your own installations in bus stops and see a fantastic collection of protest banners and signs. There was also a small band of wandering Anarchist protesters who were also very lovely people and much more cheery than the slightly gormless Stormtrooper who patrolled the grounds.

I especially enjoyed the chance to bounce on a small trampoline in the floor whilst discussing socialism with a friendly young artist. Because who wouldn’t?

We particularly liked the library which has some great, hard to find political books, but of course time was of the essence and so devoting an hour to reading was not really possible. Next time we visit I think we’ll make time, and some people were definitely happy enough to just sit and take in the atmosphere. This wonderful lady was not part of the installation but we thought they should definitely get her back. She really added something quite special to the library area.

And so night fell over Dismaland. It was the perfect time to ride the carousel and then the ferris wheel, to get a bird’s eye view of the park lit up in a predictably creepy way. Fortunately for us, it was this exact moment when a massive firework display lit up the sky. We congratulated ourselves on some amazing timing. But then the time came to leave. Nothing lasts forever. My pictures don’t do Dismaland justice and I have refrained from describing a hundred more amazing things that we saw and did, because you should just go down there and see it for yourself. At £3 a ticket it provides excellent value for money and if you’re anything like us you will have a smile on your face the entire time you are in the UK’s most disappointing leisure activity. Except when you’re posing for a selfie to show what a Dismal time you are having of course. 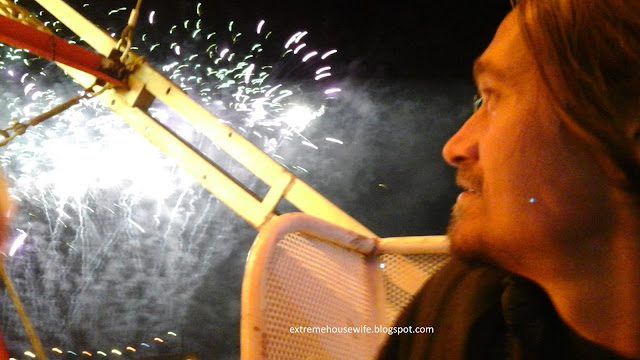 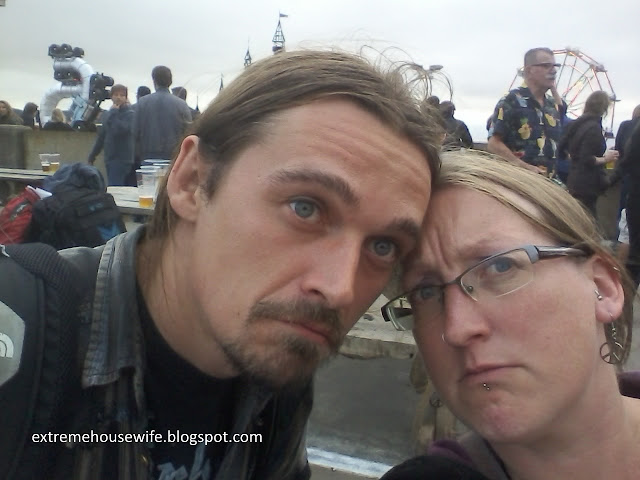