As part of our epic Couch Surfing adventure in Catalonia recently we had the stunning good fortune to be introduced to the wonderful Mireia from Bodegas Pinord – part of a wine making family with a pedigree over 150 years.

Not only did she very kindly immediately get on the phone and organise for us to have a tour of the winery the very next day, but we were also in a restaurant that served Pinord’s fabulous wine, which is called ‘Mireia’ in her honour! Of course it would have been rude not to try and bottle, and to get her to pose for a photo with it and our fabulous couch surfing host. 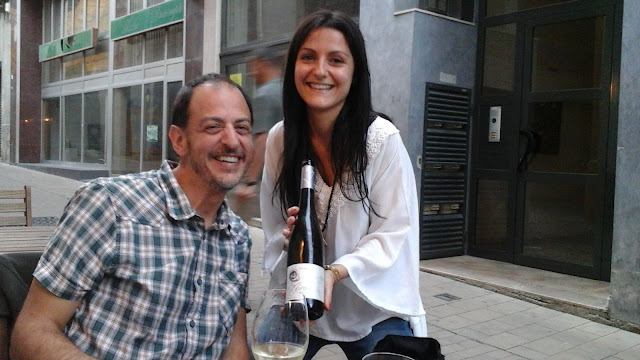 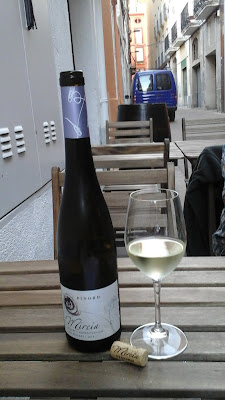 This mix of Muscat and Gewurztraminer truly is a delicious wine. Light, floral and fruity on the nose, it has a rounded and aromatic flavour in the mouth with a perfectly soft texture. The fruit is apple, but not quite the syrupy cooked apple that you might expect from, say, a West Coast blend of these varietals – it is much more subtle and slightly acid at the end which comes from a tiny proportion of Sauvignon Blanc which is added, only about 5%, just to take the edge of. It is a perfectly balanced wine which would go really well with salmon, fish and seafood dishes. I scored it a 9, but was truly in a quandry as to whether I should give it a 10. Perfectly easy drinking, just gorgeous.

Happily you can buy this in the UK for a relatively reasonable price, but nowhere near the 7.50 Euros or so that you can expect to pay in Catalonia! (Worth making the trip on so many levels!) I found it available online through Wine Poole, in Warwickshire for the 2013 vintage at £10.65 per bottle and £8.50 delivery to the UK mainland for a case.

After a delightful evening we duly turned up at the Pinord winery the next morning for our appointment. The bodegas extends over a couple of blocks in the wine making district of Vilafranca, it is by no means a small enterprise! We were greeted by Xavier, who it turned out was such a wonderfully friendly guy that he is certainly rivalling Xavi Roig from Cal Feru for the title of Nicest Guy in Wine. He was entertaining, incredibly knowledgeable and clearly deeply committed to making quality wine.

Another winery tour led to a whole new series of experiences for myself and The Boy. As Pinord is such a large enterprise, they have an amazing diversity of products on offer, covering different DO regions, different types of wines, a huge selection of varietals – truly something for everyone. Xavier took us to see everything, from the tasting room to the cellars. He explained their different equipment for receiving and preparing the grapes for red, white and rose grapes.

We were started off with a delicious, light rose cava to enjoy as we started the tour. Then as we followed the journey that red and white wines make, he also gave us the opportunity to try the free wine poured straight from the vat, which was something I had never had the chance to do before! It was delicious, although you could tell that it still had some way to go before it would hit the table, it was fascinating to taste such a young wine and to understand a lot more about the processes that refine the wine during its life. Still totally drinkable though!

Another first for both myself and The Boy was in the cava production area. We saw the cellars where the riddling (remuage to the French) took place, turning the bottles fractionally each day and gradually inverting them to move all of the yeast into the cap. Then, we saw where the necks were frozen and the bottles disgorged to release the yeast. At the time it was a rose cava which was being disgorged and Xavier obligingly grabbed a bottle off the conveyor immediately after it had been disgorged and passed it to us to taste – another first!! This was also interesting, as the second fermentation in the bottle is what is used to distinguish different qualities of cava (reserva, gran reserva etc.) but still gave us a fascinating insight into young cava and how a quality product is still very definitely drinkable even when it is so young. 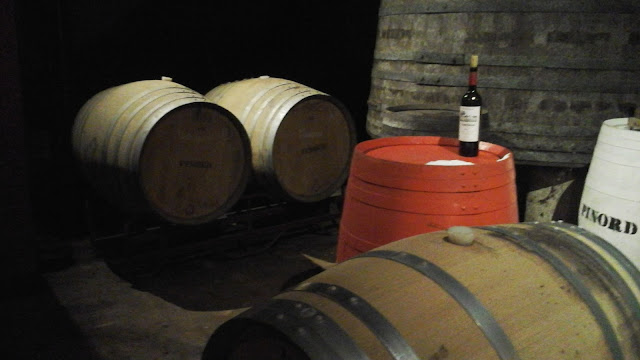 After we had enjoyed a thorough tour and heard in great detail about all aspects of Pinord’s production, we went through to one of their reception rooms, where tastings, pairings and other fun parties and events are held. 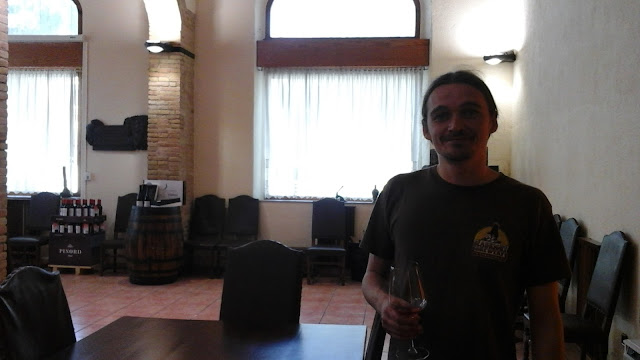 Of course, we’d only tried 3 or 4 wines during the course of the tour up to that point, so naturally it was time to actually taste, in a conducive environment to note taking, so now I can actually give you a little more detail about the wines that we tried!! 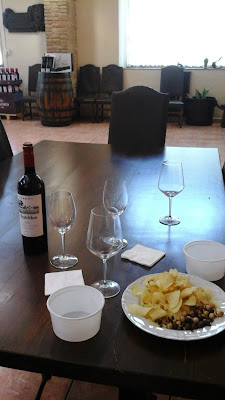 Another stunningly good, deep wine that would pair excellently with meat dishes. Mainly composed of Cabernet Sauvignon, it has a touch of Merlot to balance it out which really comes through in the levels of fruit and the taming of the tannins in this wine.

It has a dark rich colour and a significant halo of aging demonstrated in the glass. It was full bodied and rich with black fruit both on the nose and in the mouth. However, despite its fullness, it was surprisingly light on tannins which made it extremely easy drinking and would allow it to be enjoyed on its own as well as with food. I detected a strong cherry note in there which made me think it would pair rather nicely with duck and have enough texture to cut through the richness, but also not over power the flavour.

It was reminiscient of the strength of a good Bordeaux, but softer and with slightly more fruit. I have scored it a 9 or so in my notes – I really liked it. Happily this wine is also available from a variety of UK suppliers – have a little Google and see which one fits your price point the best as some appear to have some quite strange delivery terms!

We were very pleased to be able to continue our exploration of organic wines at Pinord, which, for example we enjoyed at Big Basin Vineyards in California and more recently at Terroir Feely in France. This wine was made with Xarel-lo, one of three Spanish grapes traditionally used to make cava and one which is rapidly becoming one of my favourites.

It was pale and clear, with an inviting floral nose. In the mouth it was rounded and full of fruit, yet somehow still dry and light in the mouth with very slight floral notes. We imagined it would pair well with a variety of foods – rice dishes with fish or meat – a paella for example! It was also delicate enough to be able to match nicely with flavours like oysters.

This one was scored 8.5 in my notes, but only because it was not quite as well balanced as the Mireia. It is still certainly a formidably good wine and another one which maintains my growing confidence in the quality of organically produced wines. Pinord have been making organically certified wines for what is a relatively long time, so I’m hardly surprised. Sadly this one seems a little harder to get hold of in the UK.

Although we didn’t have the opportunity to taste them, it was very exciting to hear that Mireia herself has produced Pinord’s her own range of biodynamic wines. You can read more about Pinord’s biodynamic farming on their website and we were very excited to see a cow horn on the shelf in the shop – the stuff of legend for anyone who has heard anything about biodynamics! The Lluna Plena Chardonnay (Full Moon in Catalan) and Lluna Nova Xarel-lo (New Moon in Catalan) are now available so do let me know if you’ve given them a go – I’d love to know how they compared with the other wines we enjoyed from Pinord.

Again I struggled to find a local supplier for these wines, I am not sure they are available in the UK. So you’ll just have to go to Catalonia to try them for yourself. The terrible, terrible hardship.

So my wholehearted thanks to Pinord for being such generous hosts, to Mireia for ensuring we were so well taken care of and finally to Xavier who was simply the best guide and teacher we could possibly hope for. I was genuinely amazed at the quality of wines we tasted at Pinord and would wholeheartedly recommend you try them out for yourself! 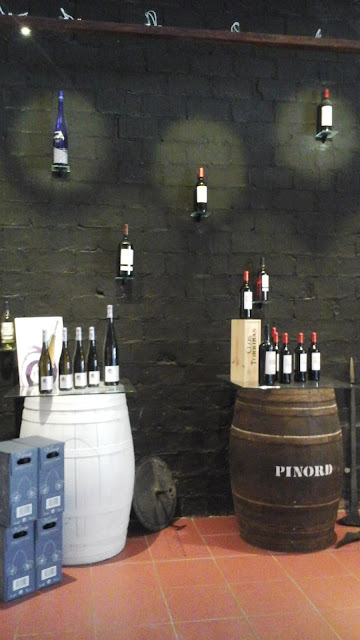