Well it was a beautiful day in London town on Thursday. I had an afternoon event at the V&A and as there was a tube strike, I had to consider a new way of getting there from St Pancras station. Upon arriving in London it was pretty clear that buses weren’t a viable option and so I walked. I saw many interesting things, including finding a street full of music and guitar shops that I didn’t know existed, which I will have to take The Boy to next time we are down there together. I also saw a nun, a 20 year old man dressed as a nana and a group of cyclists on Boris Bikes singing showtunes down The Mall. 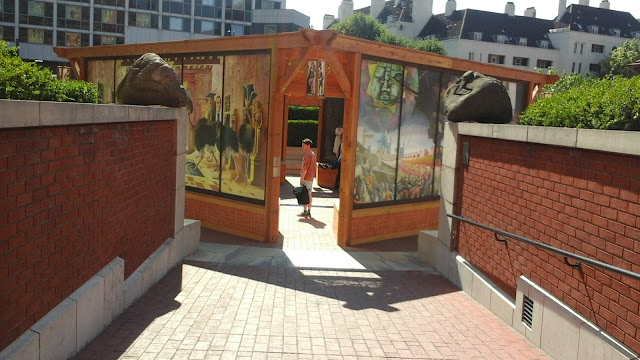 In amongst all of these very special things I also took the opportunity to stop off at a few museums and galleries along the way. I started off at the British Library, where I was interested to take in David Normal’s installation. This work was originally created for Burning Man, so it was nice that I was there on a sunny day to see it in its full glory in the piazza. The lightbox murals on Crossroads of Curiosity were inspired by old book illustrations taken from the BL’s digitised collections. Although Normal’s style isn’t really my cup of tea, I did like the idea and the overall structural feel of the piece. The smaller details, like the sort of Persian-inspired tracery above the entrances was definitely my favourite element. It reminded me of the fantastic Ancient Persian exhibition that was on at the British Museum a few years ago. 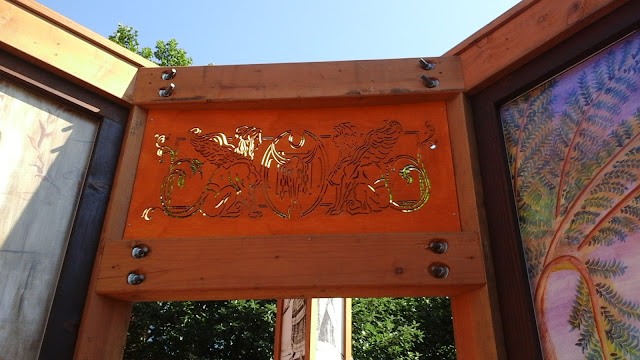 After the British Library it was a short amble down the road to the British Museum. Being not a great fan of the Tube anyway, this is a walk that I make relatively regularly as it only takes 15-20 minutes which is about the same as navigating your way through King’s Cross and then still having to walk over from Russell Square. On Russell Square I was given a cereal bar and a voucher for £3 off my next shop by a nice lady from the Co-op.

With such a long walk ahead of me I decided not to linger at the British Museum, which I do seem to visit quite regularly for work anyway. However, I couldn’t resist popping into the Ancient Egyptian galleries, which hold particular relevance for me at the moment since Leicester’s main museum, New Walk, has gone a bit Egypt mad this summer. 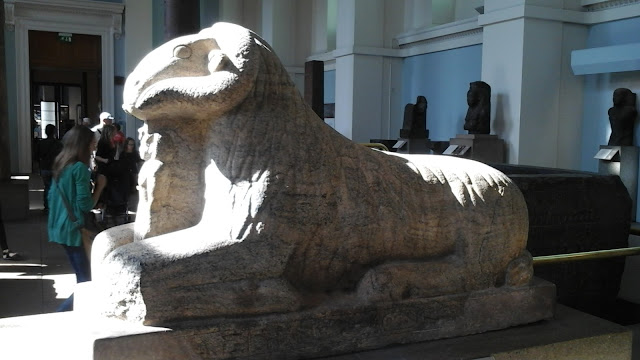 The objects in the gallery were looking particularly beautiful as the late afternoon sunshine flooded in through the windows. This gave them a real extra dimension of beauty for me, even though they are such a familiar sight that they feel like old friends.

After the British Museum I was in unfamiliar walking territory, but I can find my way around a map and so off I headed, to see what was doing at the National Portrait Gallery. I don’t know why, but I always really prefer the NPG to the National Gallery. Just my own taste I suppose. They had a small installation of four works by abstract portrait artist Jack Smith, which I found really interesting as his sitters were composers and dancers and his work aims to incorporate elements of the movement and vibrancy of their creations into their portrayal. Although I know not everyone will like this approach, I thought it made for some really interesting and fun results. 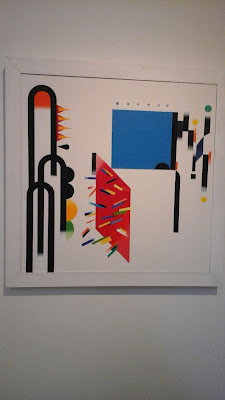 I also did the typically nerdy museum things of taking lots of photos of interesting, flexible hanging methods that the NPG were using but I won’t bore you with those pictures! After the NPG that natural stopping point to people watch and take in a little drink of water was in Trafalgar Square. 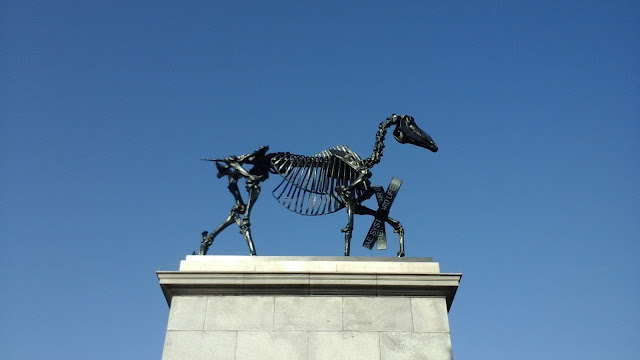 This was the first time I had seen Hans Haacke’s Gift Horse since it had been unveiled on the Fourth Plinth and I have to say I really liked it. The electronic ribbon displaying the London Stock Exchange data made me think about the technical failure in the New York Stock Exchange the day before. I wonder what would happen if the same happened in London – would Gift Horse’s ribbon fall blank and silent? I suppose the artist used this live feed not only to comment on links between power and money, but also in the assumption that the stock exchange feed would be a perpetual feature during the time the installation was in place. That would say something even more were this not to be the case. 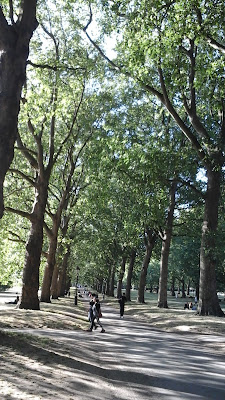 After Trafalgar Square, I headed off down The Mall and nipped into the Institute of Contemporary Arts where I purchased Day Membership for £1 to have a little shufty at Eloise Hawser‘s exhibition. The ICA have some great little exhibits of really interesting work on, but beware their interpretation – I find that they can over-intellectualise to a degree. Maybe just go and like what you like, regardless of what the institutional voice is. They do have a good bookshop though.

After that it was on past Buckingham Palace and through Green Park. The park was a lovely environment to walk through, although I suspect it was much busier than usual as by that point I was hitting the key evening commute time. Still, it was nice to get slightly further away from the roads and have a bit of greenery in view.

Lots of people were enjoying post work picnics in the park and it was altogether very pleasant. I also started to realise by this point just how many statues and arches we have in Our Nation’s Capital. It’s loads. They’re basically everywhere. I suppose that by having a little amble around the place instead of diving on the tube I was actual able to notice a little more of what was around me.

By the time I reached Knightsbridge I was starting to get a little hungry and so it was time for some tea. I found a nice little Italian restaurant which had some early evening specials and was able to grab myself some crispy squid and a nice glass of Inzolia. On looking at their website I see it is a bit of a London chain, but the staff were very friendly and it was nice to take the weight off for half an hour. I picked the wine before ordering the food so the match wasn’t particularly well made, but the crispy squid was delicious – very nicely cooked and there were tentacles, which seem to be something of a rarity these days. 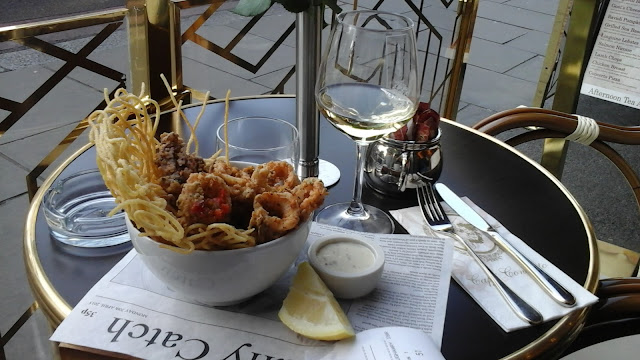 I do always get a bit annoyed that they add a service charge as standard in That London regardless of what you order. I’ll decide if I think the service is tip-worthy or not, but I suppose in the capital they can rinse you for whatever they like. However the waiters were very pleasant and attentive so I didn’t begrudge it in this instance. I was pretty surprised they didn’t have wifi though.

I do get baffled by these deep fried crispy string things that are popping up as garnish though. They always seem to be completely unseasoned, totally pointless and just fling themselves everywhere if you try to break some off to actually eat it. Answers on a postcard please. 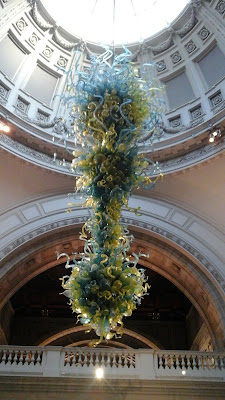 And then finally I was at my destination, the V&A to have a chat with lovely people from the Crafts Council and various other contemporary craft and art organisations. I still love the amazing glass chandelier in the entrance foyer which has been in place for some years now. It makes for a wonderful contrast with the traditional building, which I understand was founded as a consequence of the Great Exhibition.

So I got to have lots of interesting conversation, to try a savoury macaron canape (super fancy) and also to have a good look around the small, but thought provoking What is Luxury? exhibition, which I really enjoyed. A really lovely afternoon all in all though, although it was a bit of a stress trying to get back to get my train on time, despite leaving with an hour and 40 minutes in hand to do what should have been less than an hour on the bus. Thank you to the tube drivers for giving me an opportunity to see some new things and well done for exercising your right to strike to ensure your employers treat you fairly. If only more people would do the same instead of demonising strikers for causing disruption. A strike would be pretty pointless if withdrawal of service didn’t cause disruption after all.

That was my tube strike. How was yours?