The Italian Job at Sapori, Anstey

We popped over to Anstey a few days ago as we were at a loose end and there wasn’t a scrap of food in the house. We decided to drop by the Italian bar and restaurant, Sapori. We were glad we did, I have to say. Having never been there we didn’t really know what to expect, but we had googled it and knew they did an early evening special for £10 and so decided it was worth a punt.

When we arrived we were pleased to find a really nicely decorated and spotlessly clean restaurant and a bit surprised to find it totally empty! It was around 6pm on a weekday, but still, surely people in Anstey have to eat? Anyway, no problem getting a table, we thought and in we went.

Our introduction was not the best ever I have to say and was by far the low point of our visit – a waiter was stood chatting at the back of the restaurant, to the chefs in the kitchen. We stopped and cleared our throats etc. to try and get his attention and he eventually noticed us and decided to make his way over towards us. He greeted us politely and asked if we had a table booked. When we said no, much to my surprise he sort of harumphed and walked away! I was a bit baffled by this and The Boy and I exchanged confused looks. Luckily a waitress behind the bar had also noticed our arrival at this point and happily decided that not having a booking wasn’t a problem in an empty restaurant and showed us to a table! 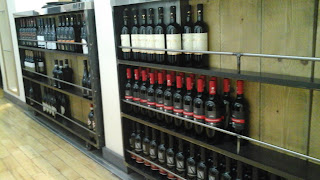 Our waitress was really friendly and knowledgable about the menu. She quickly took our drinks order and left us to peruse the menu. The menu is quite exciting, because it comes in a metal cover. I don’t know why, must be an Italian thing. It was all I could do to resist the urge to hit things with it to see what noise it made. 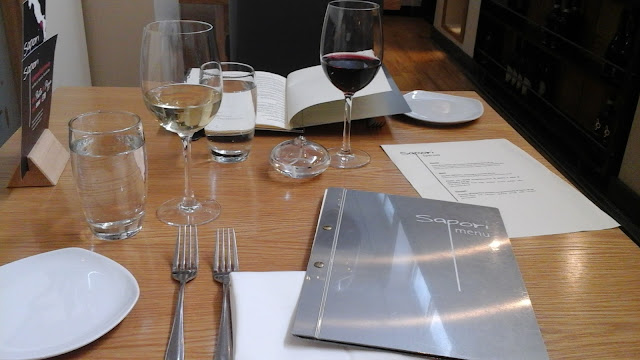 We took a glass of the white and red house wine each, as this was part of the £10 early bird special. The white was a Sicilian Inzolia which I really enjoyed – it was nicer (and cheaper) than the Inzolia I had been given in London at Cafe Concerto a couple of weeks ago. Floral, rounded and delicious. 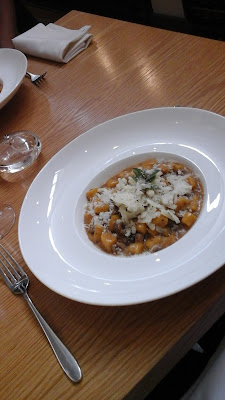 The Boy had the house red which was a light, easy drinking Nero D’Avola. I had a little sip and found it to have quite a hefty balsamic tone which I don’t think I would particularly have enjoyed on its own but I can see it would be a great match with food.

Our food also arrived quickly and by this point it was clear that the restaurant manager was taking special care to ensure that we had everything we needed in good order which was a nice personal touch that we were pleased with. We both plumped for the gnocchi, which was made with a mixture of regular and sweet potato, giving a pleasing orange colour to the gnocchi. It was dressed with lamb ragu and a sprinkling of grated ewe’s cheese. The texture of the gnocchi was perfectly al dente and it was a good sized portion. The ragu was tender and flavourful and the whole thing was well seasoned – particularly with fresh grated parmesan added at the table and a twist of black pepper.

The ewe’s cheese was a good addition to the flavour also – my only complaint was that it was all clumped together. I am not sure if this means that it was processed pre-grated cheese or had been grated on site and then kept grated in the fridge, but either way I can’t see that a fresh sprinkle of cheese can be that much hassle. It did look a little like grated cheese you buy in a bag from the supermarket, but I could be way off here so I’ll leave you to judge for yourselves when you try it!

Anyway, we were really impressed with the flavour of the dish and generally with the service so we will happily return to Sapori. Their main a la carte menu is around £8-£12 for a pasta or pizza dish and about £15-£20 for a meat/fish main so it is about the same price point as a chain. They also have a large bar available for you to pop along for a drink and maybe some bar snacks which looks like a lovely place to lounge around, if you’re not especially hungry.

All in I’d say for the quality of food and service they’re looking at a 7 or 8 out of 10 – but first impressions count and so I wouldn’t go any higher based on our first visit. I’d definitely pick Sapori over Pizza Express any time though! I can see that other people have complained about the service also in the past, so I’ll let you judge for yourself about how they respond to criticism! *Warning: potential social media disaster follows*

Oookkk…This is another present from tripadvisor!!!!This gentleman and calling him gentleman I have been far too good…
Posted by Sapori Restaurant & Bar on Tuesday, 30 June 2015

Disclaimer: Sapori didn’t know I was going to visit or write for the blog about our experience (neither did I until I was eating my food) and we paid for our meals in full.