You can never write too many posts about Catalonia and cava right? Thought not, so here’s another one for you. Freixenet is the big daddy of Cava producers. Most people in the UK are familiar with the brand, it is the juggernaut of Spanish fizz. However, biggest is not necessarily best, or perhaps I am a bigger supporter of the small producer, but judge for yourself from my tasting notes. 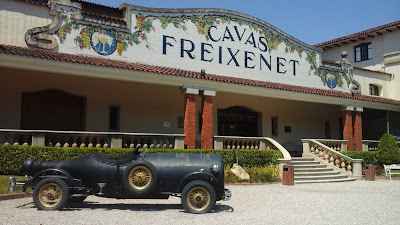 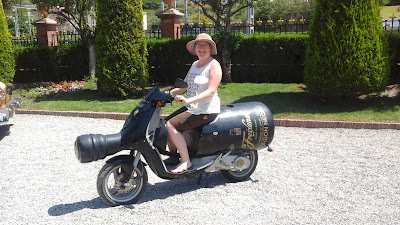 They do have a Freixenet scooter in the front yard of Cavas Freixenet which is an extremely fancy place indeed, but I did find it much more clinical and pristine compared to all of the rest of the cava producers we have visited. Even Pinord, which comes relatively close in size (although still tiny in comparison) was immediately comfortable, welcoming and relaxed, whereas I felt much more part of a tourist marketing machine when popping along to Freixenet to taste. We didn’t bother with the tour, as we didn’t have time on the day, but I think that’s pretty exceptional – most people come for a tour and a taste as part of an all in train ticket deal from Barcelona. 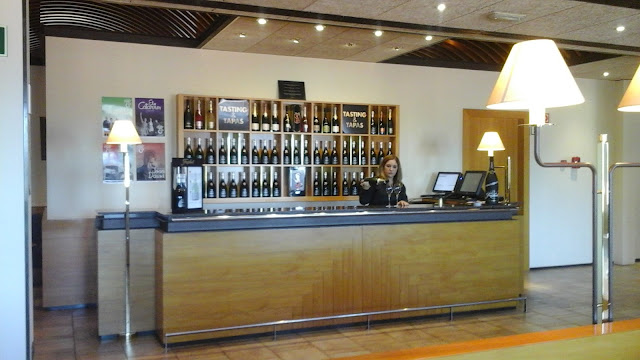 The tasting room is as clean and sleek as you would expect, with servers in smart, well pressed uniforms and a uniform greeting for everyone. As we were not part of a tour, the tasting room was deserted, which meant that there was not a great atmosphere, which is normally not a problem as we’ll just natter with whoever is serving the tastings, however at Freixenet it was made quite clear that we should seat ourselves down, away from the bar, so there was little opportunity for chit chat.

Aged 36-48 months, this Reserve cava smells floral and sweet on the nose, with a hint of peach perfume the key note. It has very light bubbles which a relatively crisp on the palate with a hint of acidity of green apple, but still a very slight residual sweetness in the mouth.

It is a faint, but very long finish that would perhaps be easy drinking on its own, but also complement something quite light, like a salad, maybe with a vinaigrette. I have to say I was not a massive fan. The bubbles were not very impressive and it went pretty much flat during the time we were drinking it. I scored it a 5 out of 10.

The Cuvee is more expensive, but all the better for it. It is very slightly more golden in colour and has a light, but yeasty barrel smell which is much more appealing and has the feel of a good champagne. The bubbles are barely there and caress the palate gently, but they persist throughout the whole glass.

The taste is very dry and almost savoury with a tiny touch of sourness. I thought it was so smooth that it tastes almost like it has a kind of creaminess, a very soft texture so this would perhaps hold up to creamy pasta dishes or light, white meat foods. I gave it a 7 out of 10 – it was nice, totally drinkable, but I was not blown away. 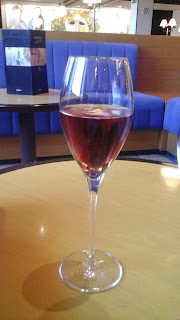 Pretty much the whole theme of our trip had become an exploration of rose cava by this point and so there seemed no reason to break the tradition at Freixenet. This particular example had a deep pink colour with a hint of peach. It was fresh, airy and promising on the nose with just the slightest hint of yeast.

It had much livelier bubbles than the other two but was still soft and easy on the tongue. There was the merest hint of strawberry and other soft fruits. It faded away leaving a very light taste and has vague sour note with a little higher acidity in the mouth. I preferred it to the Reserva, but was still not a big fan.

It was no match for the rose we tried at Canals & Munne for example, I gave it what I considered to be a generous, and relative 5.5 out of 10.