As well as tasting some epic wines during our recent visit to Catalonia, we also got the opportunity tto visit the nice folks down at Edge Brewing in Barcelona. They are a relatively new brewery, established in 2013 by two Americans who wanted to bring American craft beer to Europe. One has 20 years of commercial experience installing breweries and the other was a keen homebrewer gone native. Their vision is to bring quality ingredients together to make craft beer in the American style here in Europe so it is fresher than you would get from imports. 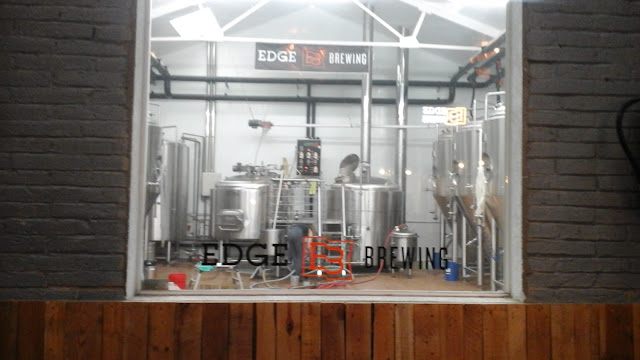 When we arrived, they were just working on their latest collaborative brew with Leeds-based cheeky chappies, Northern Monk Brew Company. This meant it was pretty busy in the brewery as work was just finishing up for the day but we still got a good opportunity to have a look around and find out more about what Edge Brewing is all about. And they have been making quite an impression. Stocked locally in around 10-20 bottle shops and bars, around three quarters of their stock is exported around Europe (but not so far it isn’t fresh anymore!) and they were proud to be one of Rate Beer‘s Top 100 new beers in the world in 2014. Quite an achievement after only a year! 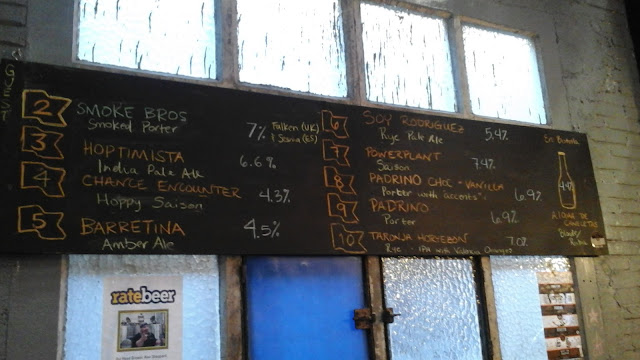 So in the stark, but stll slightly hip warehouse, protected from the worst of the day’s heat, we took to their bar and sampled the wares. They are not 100% set up for regular visitors yet, so it was a bit of an exclusive preview for us. Be warned of clicking the links for the beers below, it takes you to the same ‘Our Beers’ page which has loads of great information but is formatted altogether in a rather cumbersome PDF file… Don’t say I didn’t warn you! 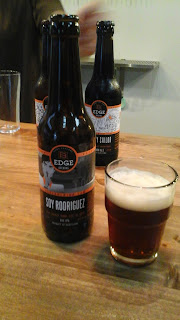 First we tried their Saison, the 7.4% Powerplant (I know, start how you mean to go on right?) This was the first beer they brewed, before they had been able to bring over a lot of the equipment they needed. The good saison flavour comes from the strong, bitter German hops. t has a long lasting tang which was a little powerful for my palate but it’s enjoyable style will be a hit with fans of full-on taste experiences.

Then it was on to the Soy Rodriguez, their rye pale ale which had a tight head, great clarity but deep colour. It was a complex beer, with toasted flavour from the roasted rye, a tighter finish than the Powerplant and a slight spiciness which made it easy drinking and interesting. That flavour profile means that it would match up well with spicy foods too, in whatever region of the world you prefer. Its the last time you’ll make the terrible decision of mixing curry with cheap, watery lager!

Our next test was my favourite of the bunch – the Padrino Choc and Vanilla Porter. This was a pretty special beer made with cocoa nibs and Madagascan vanilla and boy does it come through. The cocoa nibs lend a rich, deep and bitter flavour which is balanced out by the vanilla which comes through midway through. The beer had by far the nicest mouthfeel of them all and was incredibly enticing and aromatic. A real flavour experience, this would match well with an equally hefty food – perhaps a little smoked duck, or something fresh off the BBQ? 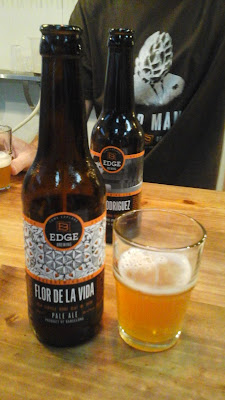 The Flor de la Vida American pale ale weighs in at a mellow 4.7% and is light but with a slight cloud. It had a good hopped flavour with a very faint floral tang – not as much as I’d hope for from a really great West Coast IPA, but still extremely pleasant and the perfect brew to enjoy in the Spanish sunshine. Definitely one to enjoy on its own, although it would complement your more traditional bar snacks very well. Who doesn’t love a well flavoured beer with a salty snack?

Next up was their biggest award winner to date, the Hoptimista IPA. A tad stronger than the Flor de la Vida at 6.6%, this had a slight ruby colour, low aroma on the nose but a great bitterness, slight whispers of pine and gentle caress in the mouth.

Finally I went in for the Taronja HoRYEzon -something I was eager to try because of my obsession with Tangerine Wheat at 99 Bottles in California. Rather than a wheat beer, this is an orange rye IPA. Featuring the true taste of Spain, the Valencia orange, both zest and juice, this was not overwhelmingly fruity, but the flavour was subtle and stayed throughout the taste experience. This made for a light and fresh beer with a bit of a kick from the rye which is balanced artfully with the dash of honey that is also part of the recipe. I could definitely knock back a few of these. A responsible amount of course.

Many thanks to our gracious hosts at Edge Brewery for a great afternoon of fascinating sampling. I look forward to seeing more from these guys in the future and hope that Barcelona locals will pop down on a Saturday afternoon for their Edge-ucation sessions where you can get the chance to try the beers and find more about how they are made for yourself. Check their calendar for more details. 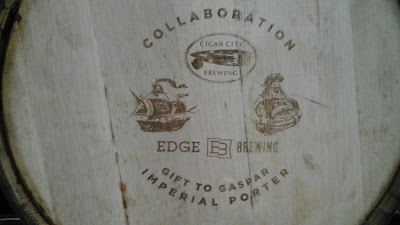