This week has been a great time for Leicester. We had the hottest day for 147 years, It was sweaty and brilliant. Friends of this blog, Rothley Wines won a silver and bronze award for their wares at the UK Vineyards Association awards. A football club manager was sacked. To be fair I don’t know if that’s good or bad. But it definitely happened. But in amongst all of this notoriety and splendour a new era in food delivery was also born in Leicester. And that was by far the greatest thing that happened this week.

London-based company, Deliveroo has been stealthily expanding across the country and they have finally made their way to our green and pleasant city. Forget J**t E@%, forget ringing your local kebab house for a greasy hunk of questionable meat, now you can order restaurant quality food, from the actual restaurant and have it delivered to your door. Or, alternatively, if you aren’t at home, you can get it delivered to the pub. Which is what we did. 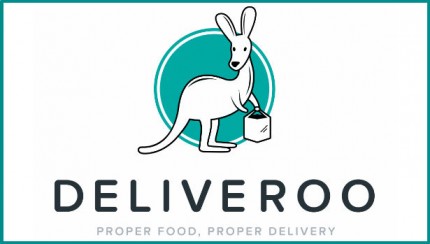 I’ve mentioned the King’s Head before when we were working our way through the best beer gardens in Leicester. They scored miscellaneous points for allowing you to bring in your own food. And so it was that this was the perfect place for me and a few mates to score an awesome takeaway and to put Deliveroo through their paces.

One friend just did not believe anything I was saying was true. As we looked through the restaurants we could order from, including Peter’s Pizza, Carluccio’s, Ask, the Queen of Bradgate and of course, the epic win that is Crafty Burger, he kept asking me how we could get food from these places brought to us at the pub. So of course I took the opportunity to film him and his hilarious incredulity. I hope it works. I’ve had trouble uploading videos here before…

We pondered and we discussed. The hardest thing was to decide where to order from as it all sounded so good.Sadly, we were ordering on a Wednesday, so we could not get Crafty burgers,which would have been my first choice. We looked over our favourite pasta dishes at Carluccio’s, I enjoyed reading the menu from Kuru Kuru Sushi which sounded awesome and very reasonably priced, but unfortunately was vetoed by the rest of the group (why is sushi so unpopular?). Everyone was very hungry, it was making them sad – they needed food. And soon.

In the end, after much discussion we went for a selection of Moroccan mezze, bringing what turned out to be a bit of a feast to the table. We ordered from Marrakech who promised us our food by 8.36pm – 34 minutes after we had placed the order. 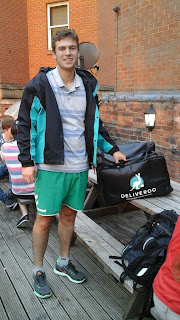 So then of course, we waited.  Happily we were in the pub so waiting was not too onerous. That is the good thing about the King’s Head. Great beers, and a lovely open roof terrace which really rocks on a lovely sunny evening like the one we experienced that night. Before we knew it 8.36pm had arrived.

And then gone again. But then, at 8.42pm, I got a phonecall! It was our driver (I believe they call them RooMen) just double checking where exactly in the pub we were. And then there he was, a veritable benevolent deity of effort-free food.

He was lovely and friendly. And boiling to death. Poor dude, Deliveroo might want to consider a branded polo shirt for drivers on hot days as he was clearly convinced that he needed to wear the jacket come what may, even though he was obviously feeling like he was descending into the seventh circle of hell he was so hot in it. It was a very warm day. But look at his lovely bag with the cute Roo logo. Very sweet. And more importantly, very full of food.

And so we received the food about 7 minutes later than promised, which wasn’t ideal but didn’t really bother us. We laid it all out on our table and dug in. We were immediately the envy of the rest of the pub who also couldn’t believe that I had used my Galaxy tab on free wifi while we had been sat there to order this food and then, hey presto, there it was. 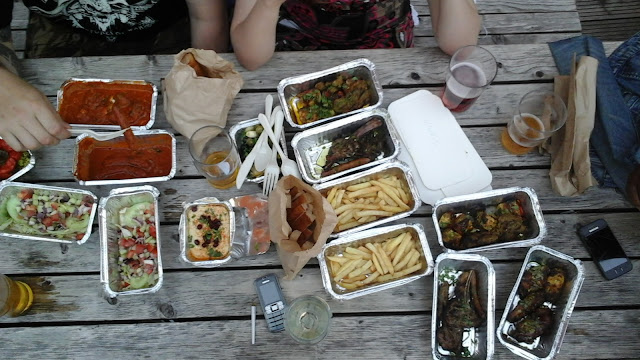 The food was a great temperature and all as pristine as you would expect in the restaurant itself. We were very happy with the quality. Our only complaint was that we were only provided with two knives and forks, even though we’d ordered for 5 people and we had no napkins whatsoever which is particularly important when you’re messing about with hummus and the like with your fingers. Perhaps in the future Deliveroo will specify number of people an order is for so the restaurant can provide the correct silverware. Well, placcy forks, but you know what I mean.

So, you pay £2.50 for delivery on top of your food order, with a minimum order usually of around£15, depending on where you order from. They deliver between midday and 11pm and have a dedicated helpline in case you run into issues. All orders and payments are made online so your money is protected if anything goes wrong. If you know you’ve got a special event or something on, you can order your food up to one day in advance so you know it’s all sorted and one less thing to worry about. Or, one more thing to look forward to.

The delivery area is just over 2.5km, which is purposefully relatively small to ensure you get your food quickly and in the best possible condition. We live outside the Deliveroo area in the city at the moment, but the King’s Head is an excellent alternative. Also, I understand that they’ll be launching an app soon where you can put a pin on a map and have your takeaway delivered to that location. Which actually sounds like witchcraft. Beautiful, beautiful witchcraft. I will possibly never leave Castle Gardens when I can sit out there with a book in the evening summer soon and get a Crafty Burger delivered right to me.

Is Deliveroo genius?
Quite possibly.