All the food at Red Hot World Buffet, #Leicester 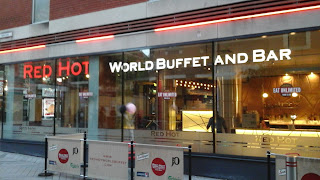 Edit 01/08/16 – The Red Hot World Buffet group has gone into administration and the Leicester branch closed last week as a consequence. Sorry!

Red Hot World Buffet has been open on the High Street in Leicester for a while now. We’ve been in before, but were invited back to review this week. It’s a great option if you can’t agree on where to eat as there is a little bit of everything and lots of chefs on site to cook things freshly for you. It is laid out like an airport with each ‘gate’ representing a different cuisine, in all you can eat buffet form.

Why is it that every time I try to write ‘buffet’ I accidentally write ‘bugget’? I don’t know but this is taking me a long time to type as a consequence. 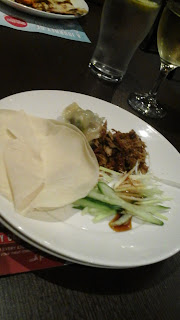 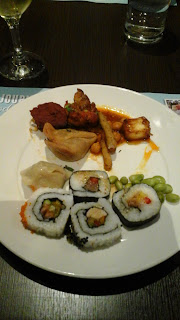 So, the amount of food on offer is literally quite staggering. We found that some of it suffered a little on the hotplate, mainly the least popular things as you would expect. During our visit this was the English carvery section, no doubt because it was a lovely day and the last thing you really want on a hot day is carvery, but it was a nice touch that there was a roast leg of lamb on offer as well as special desserts to mark the celebration of Eid.
I would definitely recommend that you visit a few times, instead of trying to cram everything in during a single visit. There’s just too much to try and even splitting different things between us gave us quiet an overwhelming amount of stuff to try. But still, we persevered to try and give you a good idea of the variety of food that was on offer.
To start there are a good mixture of Asian and Indian inspired dishes. We went for the crispy duck pancakes and the steamed gyoza, which are two of my personal favourites and I have to say I was very impressed. The plum sauce was flavourful, the veg crisp and the duck was, well, crispy. It was an excellent rendition, given that it was not freshly prepared to order. The gyoza were also a highlight for me, although be warned the chicken ones are extremely popular and so you may have a bit of a wait for a fresh batch to be put out!
We also tried to make a compilation plate with Indian starters on one side and Asian on another. I’m not sure how successful it was photographically but it did taste nice. The lamb kofta style thing was particularly nicely spiced and the spicy chickpeas were also full of flavour. I enjoyed the chilli panner as well. There is plenty of curry available for main as well and you can go to town on poppadums, rice and nan, although of course the savvy buffet eater will keep it low on the carbs.
I really liked the sushi bar too, there was a nice mix of vegetable ones and fish sushi, and they had a really flavourful, authentic taste with all the sauces you would expect on offer. I was pleased to see edamame beans there as well, which I do enjoy, although these were one of the elements that did dry out a little in the hot plate.
After this we were already pretty satisfied, but we carried on regardless, trying hard to get small portions of everything so that we didn’t waste any food. I went to the fresh to order pasta counter and got us a chicken carbonara. I did ask for a half portion, but they don’t see very receptive to this, they just mainly make you what they are used to making. You can get a variety of ingredients in the sauce. We had chicken, garlic and herbs and although I felt it was a little underseasoned (and there is no salt and pepper on the table) it was still creamy and very enjoyable. We also took the opportunity to grab a couple of slivers of pizza whilst we were in Italy which were very nice. 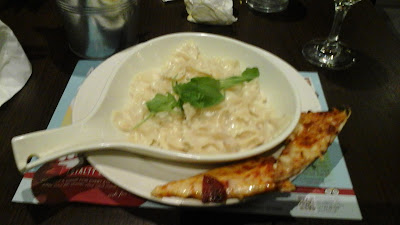 Of course the pizza is very popular and there are lots of other fast food bits around the place for you to enjoy including the ubiquitous chips, onion rings and also a kids section which was a little disappointingly full of chicken nuggets and the like. However the salad bar was fresh and vibrant and means there is ample opportunity to give your children a good quality healthy meal should you choose to take them along. With so much choice available I don’t really see the point of a separate kids section really, but maybe that’s just me. 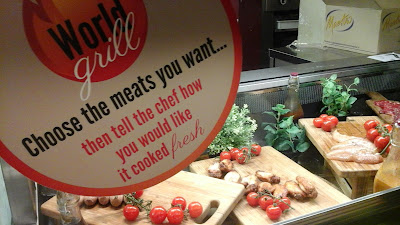 Onwards and upwards, we wanted to try more of the cooked to order elements and so had to give the big fat juicy prawns a go. They were indeed juicy and delicious, and we saw another chap ordering a rare cooked steak which was just shown the grill and looked absolutely perfect. To be honest if you visited this section alone you could sort yourself out a brilliant surf and turf which would be worth the money you paid for the meal. 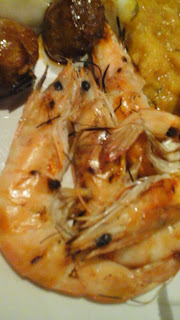 There were also sausages available here and burgers, with burger buns on the side for you to build up a nice burger, however you like it. There was also a cooked to order dosa stall which looked lush, but by this point it was quite clear that we might die if we ate much more. 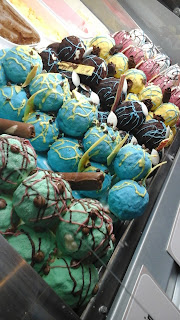 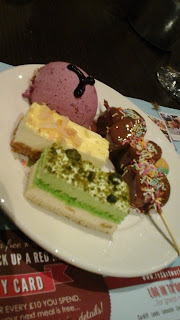 And so what’s a girl to do except try the dessert. They have a chocolate fountain, a range of tiny cakes (I do love a tiny cake) and a whole ice cream bar, as well as little bowls of sweets and all kinds of delicious treats. The ice cream display was particularly vibrant and pretty looking and they had blue flavour! BLUE! Well I guess it’s bubble gum or something, but I always think of it as blue. The Boy was most complimentary about it. 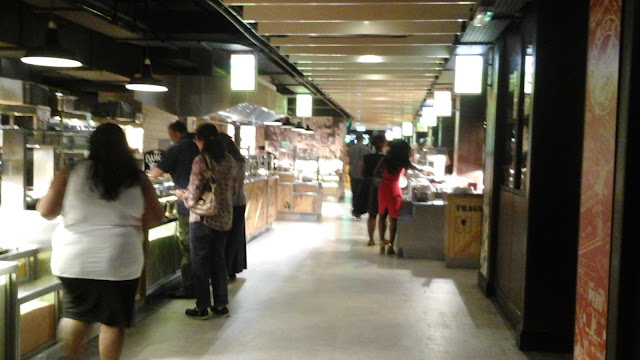 The raspberry panna cotta and the pistachio and ginger slice (pictured above) were my personal favourites. I wasn’t so fussed on the chocolate fountain though as there seems to be a lot of extra stuff in the milk chocolate to keep it flowing well, so it doesn’t actually set on whatever you dip in there, so that would be something I’d swerve next time.
So thanks to Red Hot World Buffet for inviting us along. We had a lovely meal and were very full indeed afterwards. The staff looked after us very well and it was a pleasure to meet such an enthusiastic and welcoming General Manager in a chain restaurant, she really added a personal touch to our experience. I think I’ll need about another five or ten visits before I can actually say I’ve tried everything. For Leicester it is extremely appropriate to be able to fit the world on one plate!!