Well a month ago I warned you that meat drunkeness was threatening to sweep the city, and now, having been invited to try Grillstock Leicester for myself I can confirm that it is every bit as delicious as we all hoped it would be! 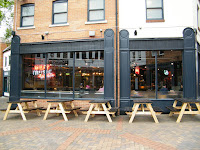 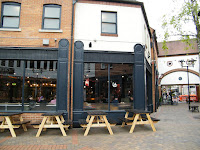 The new kids on the block in St Martin’s Square, Leicester are Grillstock, who promise to bring us meat, music and mayhem in no short order. We nipped down before they opened at the end of May, but then promptly sodded off to Spain so I didn’t get chance to write about the experience right away. Sorry to have left you all hanging, but if you haven’t made a date to get down there yet, you really don’t know what you’re missing!

The restaurant is a pleasing mix of contemporary American styles, with industrial, scaffolding and vice table frames, a range of regular and high tables and plenty of room to accommodate even the largest party, I really like that they don’t take bookings, so you can just waltz in any time you’re minded too. Reserving tables is such a drag for somebody as scatty as myself, plus I don’t know what I’m going to want to eat until the moment comes! It’s a really relaxed atmosphere, with lovely friendly and helpful staff and we particularly enjoyed the music throughout our visit, which seemed to be quite heavily based around 70s and 80s rock at that moment, with a few other odds and ends thrown in for good measure. 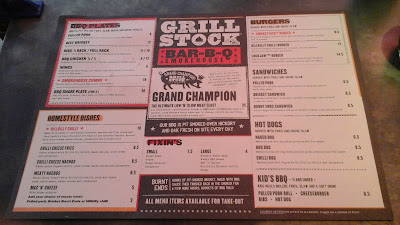 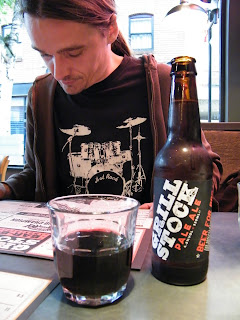 We started off by sampling their drinks menu. The Boy opted for the Grillstock Pale Ale, which he was really impressed with and will certainly be ordering again. They also had a selection of other decent American ales on offer, of which naturally the Flying Dog was The Boy’s preference. He loves that brewery.

I got myself a glass of wine, which as you can see from the photo was served in a small tumbler. I wasn’t overly impressed with the quality of the wine, which was a 2012 Californian Merlot. I found it to have a good slightly smokey and deep ripe fruit flavour which was a good choice for the menu on offer, but not the best wine, certainly not for the price point it hits, only a 6 out of 10 for me on that.

However, they do have a few other beverages up their sleeve which suited me a lot better, most notably their sours, which were absolutely excellent. I opted for the one with the Honey Jack Daniels, which really commented the sharp lemon flavour and had a great texture from the egg white. That drink was definitely a top pick for me.

Having flapped our gums about the quality of the drinks on offer, we had worked up a sufficient hunger to start thinking about what to eat.

Vegetarians beware, this place is not for you. Unless you like Mac n Cheese, which is actually a perfectly respectable meal in its own right. However, Grillstock are unashamedly for the carnivore. Inspired by the American barbecue tradition, they aim to recreate that great, slow cooked, flavourful meat experience here in the UK and make no apologies for it.

We opted for the sharing platter for two as it was impossible to choose which delectable meat we wanted to sample and which we could live without trying. We also got a range of sides to make sure that you, dear reader, were able to see the full range of Grillstock goodies – aren’t we selfless?

The BBQ share plate comes with an enormous mound of meat presented on a tray. There was pulled pork, brisket, a full rack of ribs, half a BBQ chicken and a pot of BBQ beans. The plate comes with fries, coleslaw, house pickles and a bread roll as standard but we opted to swap this for some chilli cheese fries instead, just to see how those went down. See, this was full-on, in-depth product research, just for you, dear readers. You can thank me later.

And before I muddle this up with thoughts and words, here are some gratuitous close up images of the meat. Because meat.

So, where to begin? Well, the pulled pork was tender, moist enough without being soggy and extremely well flavoured. It was actually one of my favourite parts, which is weird because I often find pulled pork to be much too sweet for my tastes, but this was perfect.

The brisket. Oh, the brisket. An incredibly delicate but immensely well balanced smokey and slightly sweet BBQ flavour clings to and permeates this incredibly succulent meat. This was by far the nicest meat on the plate for us and the bit that had us fighting over the last scraps at the end. I don’t think anyone else in Leicester is doing brisket to this standard at the moment, indeed it can be quite hard to get in restaurants. I’ve heard a whisper that the Rutland and Derby do have brisket on their new menu, so let me know in the comments below if you’ve tried it so we can see how they compare! It really will have to be something truly wonderful to beat the glory we had at Grillstock.

Next on the menu is the full rack of ribs. Now, I recall I was waxing lyrical recently about the ribs at Marco’s, and all of the great compliments I paid them still holds true. While the ribs at Marco’s are soft, tender and fall from the bone, those at Grillstock are tightly knitted, extremely light on discernible fat and smothered in sticky BBQ goodness. They are much drier, but for me that was slightly preferable. The meat was charred on the outside with the delicious smokey sauce that is also available on the table if you want more. It was a great textural experience and again, something I would definitely opt to have again, despite previously being something of a rib avoider.

The half chicken came in two parts, breast and leg. It was moist and had a delicious BBQ char on the skin. The flavour permeated throughout the meat, but at the end of the day, it’s chicken. I think when you have such an array of amazingly handled slow cooked meat available the chicken is the last thing you’d choose, but that is not to say that the quality and the way it has been handled can be faulted in anyway. If you order it, you’ll love it. But brisket people, it’s all about the brisket!

Finally, there were the BBQ beans. Which to be honest were more meat than beans. Which was awesome. They had a good spice and a mixture of types of beans were used in them. I could probably quite happily eat a tub of these with a bread roll for my lunch and be more than contented with the world. Fabulous. 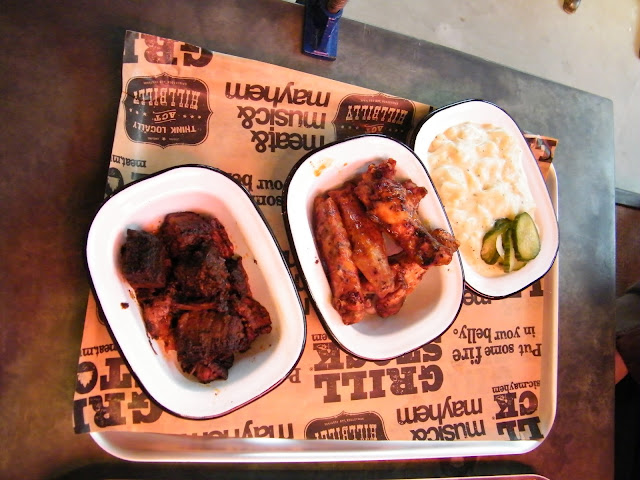 And of course there were the sides. The chicken wings disappeared down The Boy so quickly that I didn’t even get a sniff of them. I heard mutterings about “like being in California” and “mmm, Louisiana hot sauce style” and a slightly negative “where’s the blue cheese sauce” but otherwise he seemed deeply contented with them.

The mac and cheese was the only area for improvement that I had. The mac was well cooked and the sauce was an excellent consistency, but it was just a little powdery tasting, as though the flour hadn’t been cooked out properly. However, the waitress took this feedback immediately back to the kitchen and the chef acknowledged it and thanked us for letting him know. Given that the restaurant wasn’t even open to the public at this point I have no doubt that it has since been rectified and I’ll be happy to head back and give it another shot. Apart from this small flaw it was well seasoned and well cheesy.

And to save the best for last, there are the burnt ends. Those of you familiar with Man vs Food will have heard all about these at the best American BBQ places, but may not have had the opportunity to try them, like me. They are chunks of that delicious pit-smoked brisket, which are mixed with more BBQ sauce and then returned to the smoker for a few more hours to create heavily flavoured, amazingly textured and basically flipping delicious bite-sized pieces of meaty heaven. I adored them. I could eat only them forever and be living in a better place. I feel I’m running out of superlatives in this post, but truly, please, go and order them and revel in their bovine brilliance. Just yum to the power of yum.

And so there we have it. A friendly place, with fun decor and a funky vibe with literally the best BBQ we have ever had outside of the United States. They took their brief from what they saw over the pond and they have faithfully recreated the deep, smokey flavours, the delicious BBQ tenderness and the most wonderful treatment of good quality meat. I hope that you have understood that I can only demand that you visit immediately and share in a little piece of the joy.