This is the penultimate beer garden Leicester post. I know, you shed a silent tear as you read, knowing that the joy of the adventure is coming to an end. But fear not, that means that not long remains until we announce the Champion of Champions, The Mutt’s Bullahs, The Big Kajonga. Who will it be? Will it be North Bar and Kitchen on Hinckley Road? Well, until I’ve got them scored, we’ll never know, so let’s crack on! 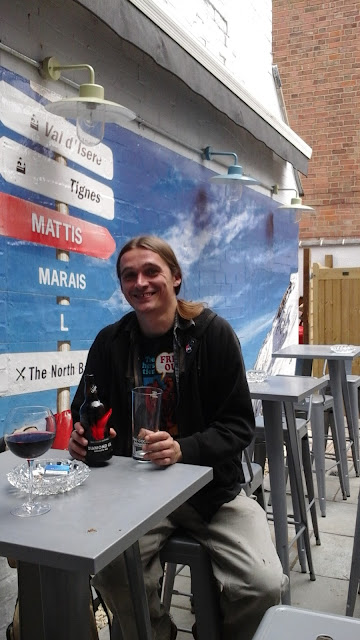 Size and exclusivity
It’s dinky and it’s sweet, just like the North Bar inside. You can’t fit a huge amount of people out there, but luckily it’s still relatively exclusive so they don’t need to. It is perfectly sized unto itself.
Early Doors
There was a lovely shaft of sunshine beating down on us when we visited after I had finished work. Admittedly, this was falling just on the one table, but we had the garden to ourselves and so that sunshine was ours.
Smarts
It is neat, grey, understated and full of clean lines. Except for the wall with the big vinyl of a mountainscape and signs to ski resorts and The North Bar. For some reason. The lamps are nice though, right? It is a little courtyard, so it is not a sense of salubrious space, but for what it is it feels very comfortable and welcoming.
Wifi
I didn’t have any problem getting a moderate wifi signal throughout the terrace  – probably the benefit of having a smaller space to deal with.
British-Summer-Proof
They do have a canopy they can pull across so in case of a light shower, you’re good. If it’s windy, who cares? You’re surrounded by brick walls. Winning.
Furniture
It’s all grey and it’s all tall. If you like tall bar stools then you’re good, if you prefer not to perch, then you’re out of luck I’m afraid.
Miscellaneous
The Boy had a real feather on his beer (see photo) but I’m not sure that improved the quality of the beer garden, strictly speaking.
Pub Dogs
Nope. No cute woofers. And you wouldn’t be able to reach them anyway, because you’re perched on a massive stool. As it were.

Edit: 04/07/15 – I’ve decided to add physical accessibility notes to each of the #beergardenleicester reviews. This terrace is accessible to visitors via the back gate – if you ask at the bar they will come and open it for you according to their team on Twitter.