Beer Club Live with Everards and the Black Horse Aylestone

So where were you last night? I didn’t see you down at Beer Club Live. You totally missed out. Sorry. But let me share it with you and then you can live vicariously through me! After all that’s what this blog’s all about. Then you’ll see how fun it was and next time you won’t miss out!

Everards, our local beery institution (and the people who encouraged me to make a really weird video) have been working with the national campaign There’s a Beer for That to run #BeerClub on Twitter on a Wednesday night between 8pm and 9pm. Apparently the first rule of Beer Club is you must talk about Beer Club. That is also the second rule and there don’t appear to be many rules after that, but they do like all things hoppified so it can’t be bad.

Well, after you’ve done a bit of Beer Club, the next step is obviously Beer Club Live and so they all teamed up with the lovely chaps and chapettes at The Black Horse in Aylestone, a fabulously cosy and beautifully presented hostelry, to bring us ‘An afternoon tea with a twist’. This ticketed food and beer matching session was compered by Everard’s own Mark Tetlow (remember him? – he’s the nicest guy in beer). He very much brought an element of the Mad Hatter’s tea party to the whole affair and as ever wowed the audience with his beer pop facts, detailed and fascinating description of the beer making process and a truly infectious passion for supping his favourite brews. 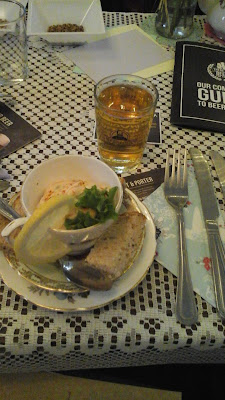 After the talk and the eating of the toasty, toasty malts came the food pairing. A truly inspired menu was put on by the Black Horse, showcasing their key offer, the handmade burgers. But I skip ahead, first we had the prawn cocktail – the perfect retro starter. It was creamy, lemony and had just the right balance for the delicate prawn flavour to come through. We were given two beers to try it with and they did very different things. Everard’s Sunchaser is a perennial favourite of mine. It is light, almost lager-like and allowed the food flavour to stay in the mouth. The very light citrusy flavour complemented the lemon in the food well, as the slight sweetness worked well with the prawn.

Secondly came Lincoln Green’s Sherwood, an extra pale ale with less citrus and more bittering hops than the Sunchaser. Much deeper and hoppier in flavour, I found that the prawn cocktail brought out the bitterness more in the beer, but this was at the expense of the creaminess of the Marie Rose sauce to some extent. Interestingly, it was the brown granary bread which complemented the Sherwood the best for me, with its robust earthiness.

Both did entirely different things to the flavour of the food, just as you would expect. I preferred the Sherwood as a match, but opinion was clearly split around the room. As with any tasting, the key is to experiment and find what suits your taste, your food and your mood. 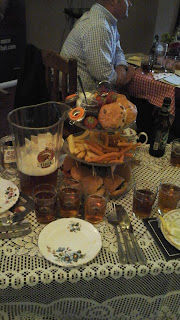 Next it was the crowning glory of our quirky afternoon tea – the cake stands filled with delectable treats. Our main was a selection of Black Horse sliders – a dazzling array of beef, lamb, chicken and mushroom burgers served with chips, sweet potato fries and a huge mound of coleslaw. We nibbled and compared the flavour of these as affected by the Hop Rising, brewed by the Black Horse team themselves and Lincoln Green’s Hood as well as a tasty fizz in the form of Brooklyn Lager. Well, I won’t bore you with the details, but it was a party in my mouth and burgers were invited. The Black Horse lamb burger was particularly succulent and well minted and their sweet potato fries are awesome. The Lincoln Green Hood is definitely one I’ll make a return to, it was an excellent complement to the meaty flavours and also, slightly bemusingly, the sweet potato fries.

After all, if I told you all the details of the matches then what excuse would you have to go and try the Black Horse burgers for yourself and to take the staff’s recommendation of a beer to go with that?

And then there was pudding. Yes, beer and pudding. A strong Chimay nearly finished us off but luckily we headed to the finish line with the Titanic Plum Porter. On its own, it was wonderful, by far my beer of the night, but with the scone, jam and cream it was absolutely heavenly, the deep fruit flavours bringing out the very best in each other and creating a truly delectable combination that I will never forget. Rich, round and deservedly award winning. 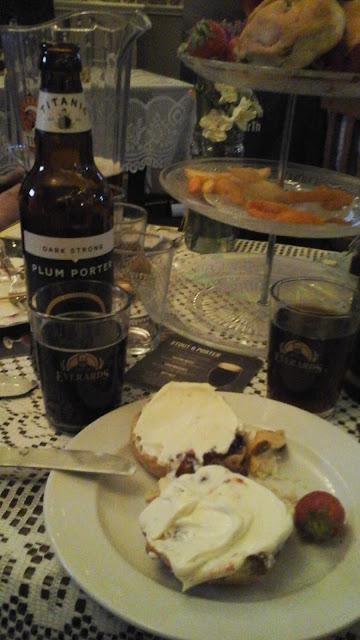 Thank you to Everards for inviting us along to a wonderful evening. If this has whet your appetite then fear not, there are more Beer Club Live events to come. Get your tickets now before it’s too late, such a fabulous, unique and fun concept.