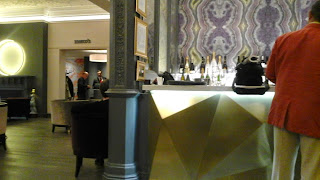 The Mercure Hotel on Leicester’s Granby Street has enjoyed a facelift recently and the new jewel in the crown is its new restaurant, Marco’s New York Italian. Bringing a dash of Marco Pierre White flair (and a lot of pictures of him) to Leicester in morre accessible format and price point than his Michelin offerings.This restaurant is sharp and stylish and we were delighted to be invited to a very special Bloggers Dinner down there to sample the menu. 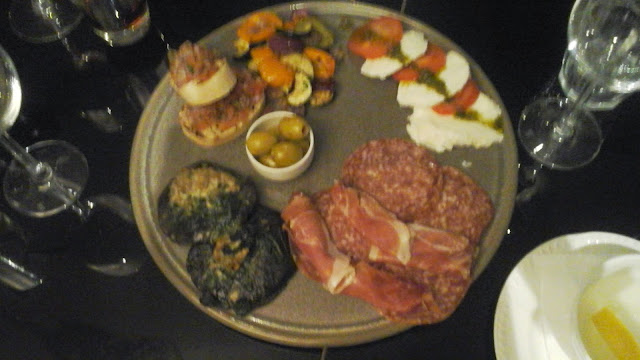 After a warm welcome and introductions, we took a stab at the starters. The New York Italian style menu gives a great variety to choose from and it was very hard to decide what to have! The Antipasto Misto platter gives a lovely variety of flavours. This is my ideal type of starter, with a selection of Italian meats, mozzerella salad, roasted vegetables and so forth. The baked mushroom stuffed with spinach and blue cheese was a surprise highlight for me, with its lovely gooey texture. 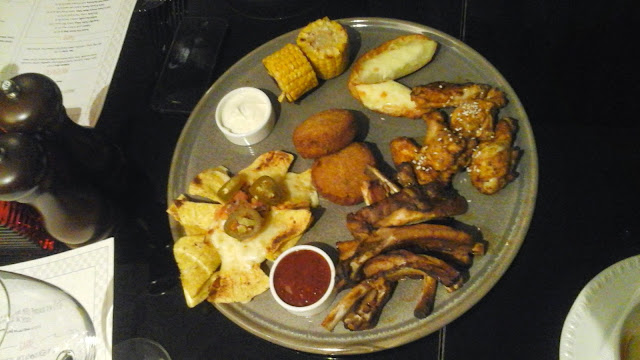 We also had a go at the New Yorker platter, which was pronounced a success by The Boy. We have previously visited Marco’s, when it first opened, and remembered that their ribs are absolutely fantastic, so we welcomed the chance to try them for a second time. They are flavourful and rich, but without an excess of fat, which is the thing that puts me off ribs normally. They are beautifully cooked too and literally fall off the bone.I also felt the crab cakes and buttery corn were highlights of this selection, again because of their bold flavours and great textures. 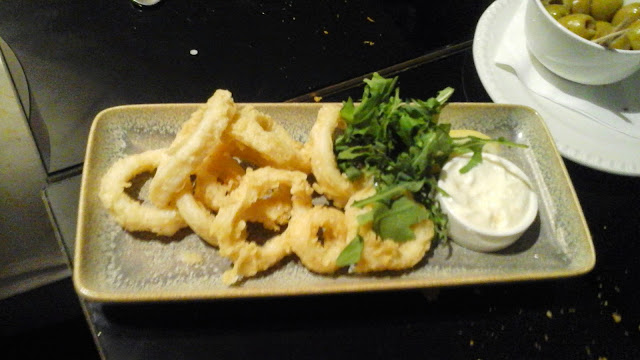 And since I am on a one woman mission to try all of the calamari in the world, we tried out Marco’s too. This didn’t impress me so much, as the batter was a little anaemic, but the squid itself was tasty and the rings had more crunch than I expected and the garlic and lemon mayo that accompanied it was well balanced. It was a shame that the rocket had been under the heat lamp for too long though, so was wilted and dried out. The portion size was good though. 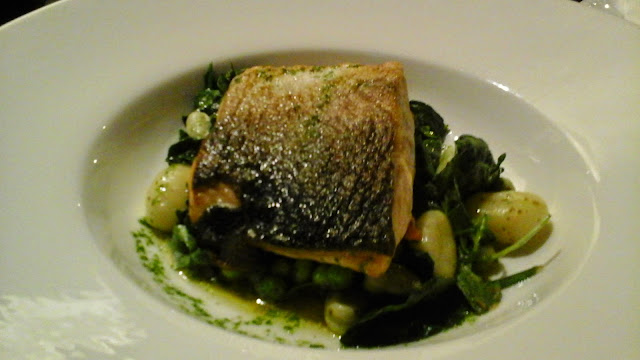 After that feast, it was on to the mains. Marco’s offers pizzas and pastas, but also a variety of steak and meat dishes, enough to keep any carnivore happy. I had the salmon which was an absolutely enourmous fillet, with oven baked but still crispy skin. It came on a bed of green vegetables – peas, broad beans and rocket and an olive oil dressing. There was a little too much dressing for my taste, so I would have preferred that to be served separately, but other than that it was well cooked, nicely presented and a very delicious combination of flavours. 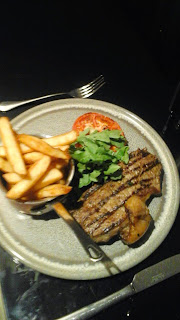 The Boy had the sirloin steak which was 10 ounces of deliciousness, although it did come with a rather unecessary curl of fat which wasn’t very appetising looking. He ordered it rare, and it came more as a medium, but it was so tender that it could still be cut with a regular table knife. They obviously take great pride in the meat that they select for the menu and have true confidence in its tenderness as no steak knives were available, but neither were they needed. 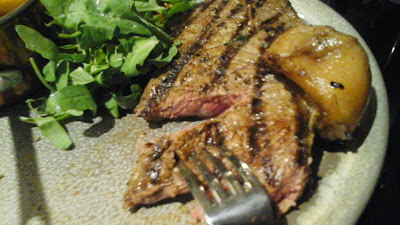 By this point we were naturally all getting incredibly full but it would have been rude not to selflessy sample the dessert menu, so that we could bring you some snaps for your good reference, and so we soldiered on regardless. 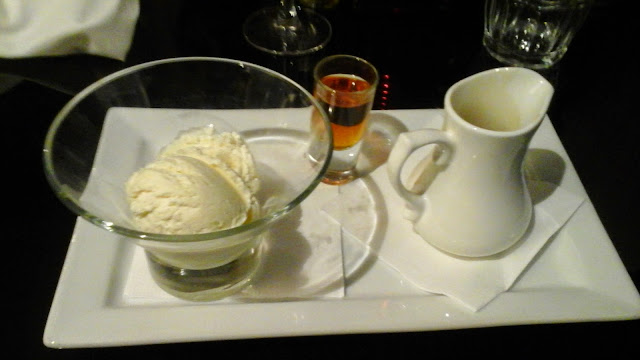 I just had to get the Espresso Affogato, as I had stared on with helpless jealously on a previous visit to Marco’s when The Boy had ordered it. It combines a deliciously creamy ice cream with a sharp hot shot of espresso and a shot of amaretto – a fabulous, messy combination of texture, temperature and flavour which makes for a delicious, but blessedly light end to a meal. 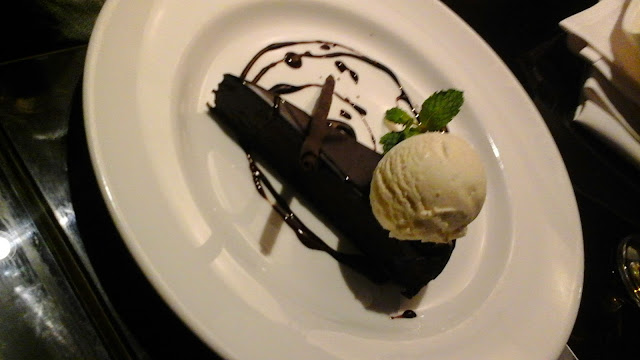 The Boy had the truffle cake, which was a thick slab of pure decadence. It had just the right balance of bitterness and sweetness with the dark chocolate, complemented wonderfully with the ice cream. This was a bit heavier, but still declared a fantastic end to the meal by Himself.

It was a really fun evening of gastronomic delights. The manager, Manish, is friendly and attentive and the service overall was relaxed and informal – I would definitely put aside several hours for a meal at Marco’s, which is all in the spirit of the New York Italian vibe. And Marco Pierre White himself will be visiting on May 26th, so there’s a date for the diary if you want to experience the total Marco experience. Thank you to the Mercure and Marco’s for inviting us to their celebratory evening, we will be having Marco’s on our regular rotation, although The Boy is hoping that their beer menu will get a much needed face lift in the near future.