#BeerGardenLeicester: The Queen of Bradgate

We’re nearing the end of the beer garden testing now and soon the Leicester champion will be crowned. The Queen of Bradgate promised me that they’d open their new beer garden in time for me to test it for #BeerGardenLeicester and they were true to their word. They’ve been open for a year now and are going from strength to strength, so we went down to celebrate their birthday with them (and take advantage of the extended Happy Hour) and check out the new outside. 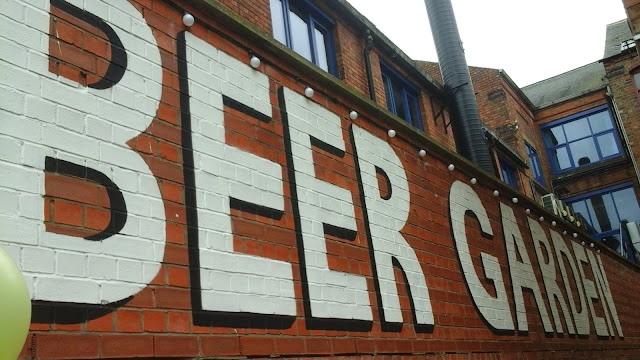 Size and exclusivity
Deceptively big, this garden is a great size for a city centre pub. Down a shady corridor (with beer garden written along the wall in 4 foot letters, just in case you weren’t sure you were going the right way) you suddenly come blinking into the open, a wide open terrace with a firepit area and plenty of tables and chairs. And beyond that, still more, another terrace which is huge – easily enough room to seat many groups of punters enjoying their al fresco beverages.
At the moment it has the added benefit that it is super exclusive because it only opened on Saturday and not many people know it’s there yet! So get yourself down there and reap the rewards! 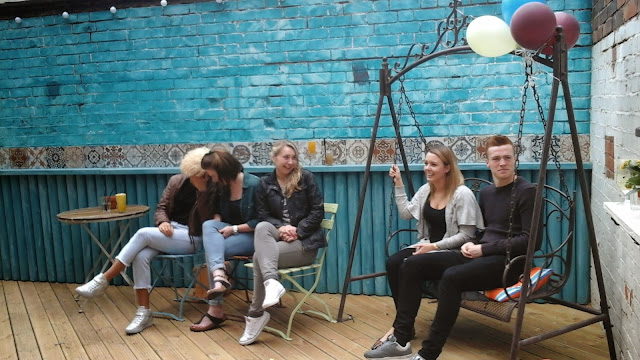 Early Doors
Not a bad offering for the after work sunshine – this garden is on the same orientation as the Orange Tree next door so the sun does come through in the afternoon and sweep across during the after work hours. Sadly, it was 100% cloudy when we were there so we didn’t get to experience this for ourselves! 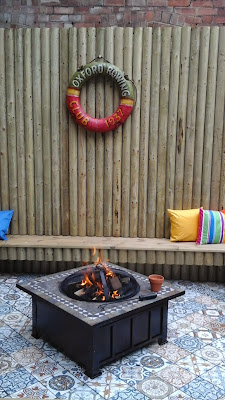 Smarts
It’s looking great, they have well placed accents from vintage tiles which give a funky retro feel. There are bright colours on the walls, and on the furniture (think they took inspiration from our own rainbow garden table here at the Happy House.) Like inside the QOB, the furniture is delightfully mismatched and they have a tonne of waterproof pillows so you’re bound to find yourself somewhere comfortable to perch. The garden has many planters all around so there is plenty of lovely greenery as well. I liked that there are a lot of herbs around the place as well as flowers – I hope they’ll be making their way into the menu!
The real highlight, looks-wise, is the sunken pit with the firepit, which has a great shape and its own retro tiles, matched with a tiles floor and wooden benches built in to the decking. It’s effortless comfort.
There are also some various accent features and artworks on the walls including murals for some of the key breweries that supply the QOB like Purity, which add a bit of visual interest.
Wifi
The wifi is a mediocre offering, although I have been promised that an extension will be in place by the end of the week, so I may have to re-score. They have their own free wifi and I could just about get it on the tables nearest the building, but not any further away.
British-Summer-Proof
Well, it has to be bonus points here because nobody else has provided us with a firepit to keep toasty! There are also brollies on some of the tables in the other area, so you’ve got plenty of options to chose from, depending on how the British Summer decides to attack us. I heard tell of blankets being on the way also, so we’ll see how that ends up. 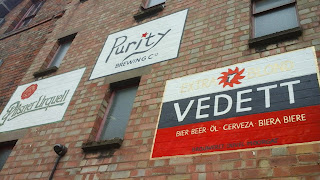 Furniture
As you’d expect from somewhere that also sells the furniture you can use in the bar, there is a fabulous mixture. Colourful and charming I really love the look and of course everything is brand spanking new and clean. The cushions are a lovely touch, I’ll be interested to see how they hold up after a downpour!
At the moment the garden is bright and cheerful, but without being cluttered. Let’s just hope that it stays that way and does not suffer the same all-pervasive ‘chalkboard creep’ which now seems to be a full blown invasion inside the pub. 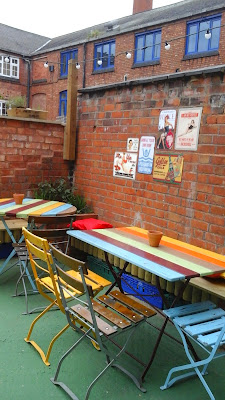 Miscellaneous
Well, it has to be points for the fire pit and the cushions. They are great.
Pub Dogs
Sadly no, perhaps it’s too new at the moment. However, I was assured that they have a water bowl for dogs to enjoy a refreshing drink and that they welcome dogs along, so hopefully the next time I go we’ll be seeing some in there.
So a late entry into the #beergardenleicester race, but an extremely high quality one. I think I will be spending a good amount of time here over the summer, especially as their daily Happy Hours between 5pm and 8pm look set to continue for the foreseeable future.
Cheers!

I returned to the beer garden today and the wifi extension has been installed and is operational in double quick time – well done chaps!
And there were also dogs. Not just dogs, but ones with which I could take selfies. Extra points due to the furry friend induced happiness which I experienced.

Second Edit: 04/07/15 – I’ve decided to add physical accessibility notes to each of the #beergardenleicester reviews. The QOB is accessible to wheelchairs throughout.