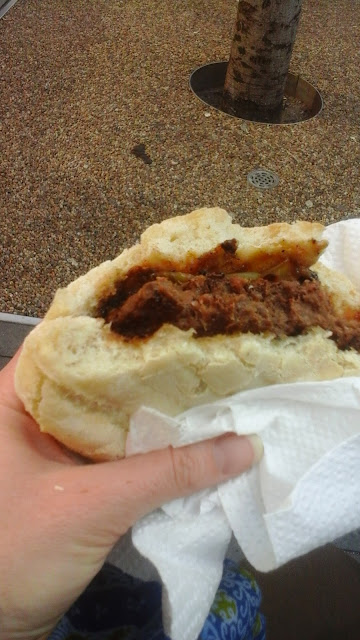 I headed down to grab myself a spot of lunch the other day. There is a great variety of stalls this time round, including, somewhat confusingly, a Native American jewellery and art stand. I suppose nobody specified what Continent the market was representing. There is also a Polish pub, which I’ll confess I have never visited, despite always meaning too, a particular delicious selection of finest quality cheese purveyors, some excellent cold meat sellers, a beautiful smelling paella stall, the ubiquitous bratwurst stand and also, in the same slightly baffling vein as the Native American stuff, a place for getting some Jamaican food. You can’t beat a bit of Caribbean though so I’m not complaining.

I settled on a stall which I believe was called ‘The Alternative Option’ which did a range of exotic meat burgers, both to eat there and to take away to cook at home. They had kangaroo, wild boar – all kinds of stuff. I was originally intending to get a venison burger, but was talked into the buffalo and chilli by the very friendly stall holder and I’m glad I was. I’ve never had buffalo before and it was a stonking eat – the burger was a great size, and the meat was succulent, dense and seemed relatively low in fat and free of any gristle or nasties. The chilli taste was subtle, but present through every bite giving a pleasing flavour and slight kick. The slow griddled onions served with the burger were also juicy and sweet. A really good way to spend £3.50.