The local pub, for local people, the Salmon was recommended by one of my facebook friends for #beergardenleicester. Brave the stare of the locals and all this can be yours.
Size and exclusivity
Pretty exclusive. The Salmon used to be open for about a three hour window a day. Things have improved slightly now, but people still don’t really know it’s there, or that the beer garden exists. It does get crowded on a sunny evening though. Bit too small, even for one of the smallest pubs in Leicester. More seats would benefit. 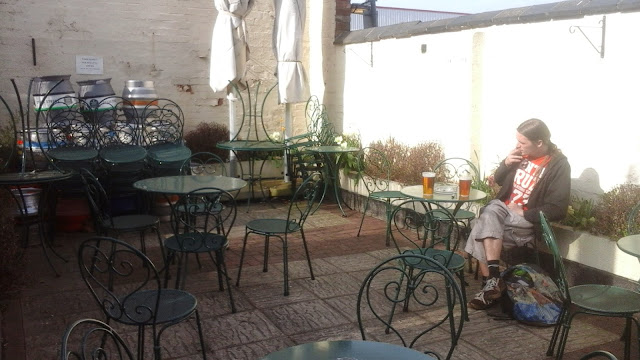 Early Doors
Pretty good shout for after work sun here, one of the best we’ve seen in fact. Can’t argue with that.
Smarts
Not phenomenal. You’re sharing the yard with a tonne of kegs and probably the landlord’s car. You’ll be kept company by an incessant fan noise. It’s a bit scrappy, but that’s the Salmon (they often have decent beer if you’re wondering about its redeeming features.)
Wifi
Oh no no no no no… Nil points.
British-Summer-Proof
There are brollies, but I’ve never seen them up, so take your chances.
Furniture
The tables and chairs are nice in principle, but a tad rickety in practice.Not the worst, but not the best by any means.
Miscellaneous
Although the Salmon falls pretty strongly into the ‘miscellaneous’ category when it comes to pubs, there is nothing in particular to comment about its beer garden.
Pub Dogs
Once again, sadly not. When will I find some top notch pub dogs. I need to go to the Western.