I went to a fab event today, at Leicester’s beautiful Abbey Park. They’ve had a sensory garden there for a little while now, but now a partnership of local organisations has generated a new artwork that has brought a whole new element of beauty to the garden.

It was a pretty fresh day today, so as the crowd of well-wishers gathered for the unveiling there was much stomping of feet and rubbing of hands to keep warm! The sensory garden was living up to its name – there was a gentle noise of water trickling on the fountain and the occasional deep bell-like sound of a large windchime hung in a nearby tree. It was very peaceful and hard to remember that we were only a few metres away from the busy main road!

We were there to celebrate the unveiling of the Park Life Nature Mosaic which was made by the learners at Continuing Studies at Leicester College and artists Paul Reilly and Fiona Meagher of the Clay Foundation. The mural was made in partnership between Leicester College, Leicester City Council and the Friends of Abbey Park and was funded by the Heritage Lottery Fund.

The event started with speeches from Verity Hancock, the Principal of Leicester College, and Sir Peter Soulsby, Leicester’s City Mayor. They both praised the hard work put in by the learners and the artists, the great achievement of the collaboration between so many local organisations and of course, the quality of the artwork. It was with baited breath that we all waited for the ribbon to be cut and the mosaic to be presented to us!

As the curtains fell away, you could hear the exclamations from the guests about the beauty of the piece and there were smiles on the faces of all of the learners that had contributed to the work. It truly is a great accomplishment – a delicate series of ceramic tiles, inspired by the varied wildlife and plantlife found in Abbey Park, which have been carefully designed, made and coloured and glazed by the learners and then arranged in a flowing design around the Sensory Garden’s raised bed. The connecting tiles feature the lyrics to Louis Armstrong’s ‘What a wonderful world’ – a very poignant reminder to the natural wonders that lay around us. The song was also the choice of the learners.

I particularly liked the large white and yellow flowers, which were made up of a vast array of tiny individual tiles, each one featuring a plant, flower or animal motif. I talked to a number of guests and we all agreed that you just had to touch the smooth, glazed surface – so as part of a sensory garden the mosaic certainly does the right job! The delicate detail is beautiful and the work leads the eye along the wall and encourages you to look again at the lovely planting in the raised bed. Once Spring really takes hold, this will be a really wonderful little oasis.

After the formalities were over we had a chance to enjoy the artwork while the artists and the learners were interviewed by the roving reporter from BBC Radio Leicester. We all then took a leisurely stroll to the education centre where there was a display of photographs from the sessions where the piece was created and also a short film about the process of making the tiles and the installation of the piece which was not only interesting but also a little emotional – nobody can listen to Louis Armstrong without getting a little tug on their heartstrings! 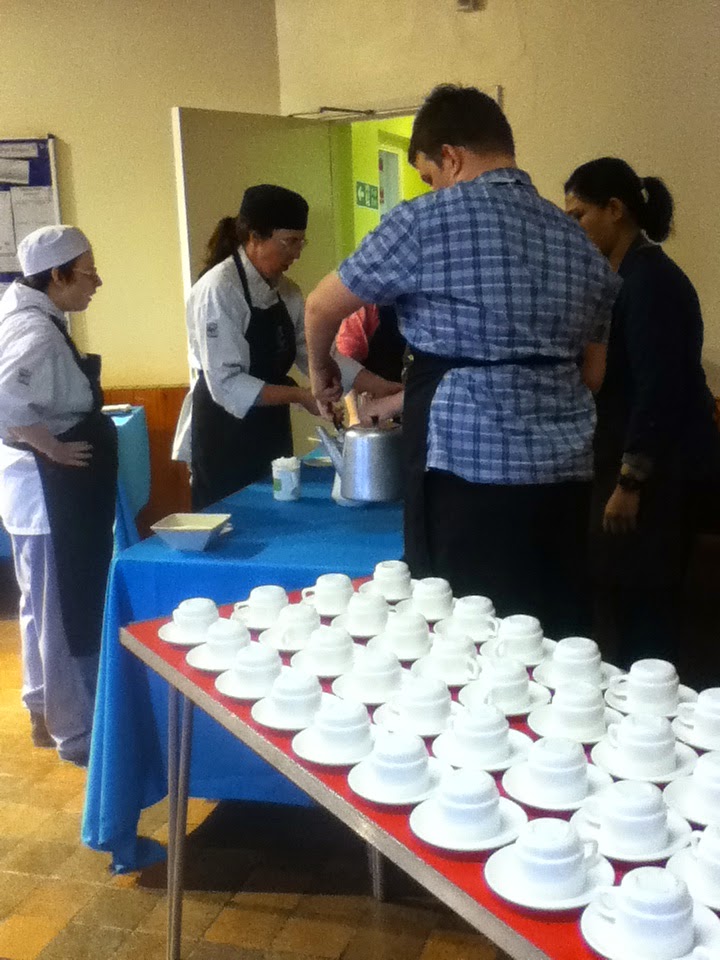 The final surprise was the reception from more groups of Continuing Studies students, who had prepared a little light refreshment for us! There was tea and coffee aplenty to warm our hands and the most astonishing array of cakes, biscuits and scones, all baked by the learners. One of the students took the time to talk me through the delicious selection of baked goods they had created for us, even the jam had been made by Continuing Studies learners! Their Saffron Acres Strawberry Jam is so good that it was on sale at 70 Central England Co-operative stores last summer. I settled for a cupcake with a delicate buttercream icing and rice paper flower decoration that reminded me of the artwork. I can wholeheartedly say it was the best cupcake I have had in a long while – moist, rich, and a lovely buttery texture. Delicious!

So I hope everyone who reads this takes the time to pop along and see the artwork for themselves. It is of course free to visit Abbey Park and the Garden of Senses will help your day-to-day stresses melt away. A lovely place for reflection, now made even more beautiful by the students’ contribution.