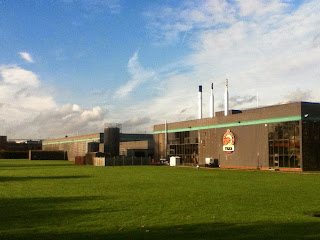 I guess it is because I have never taken a tour of the Everard’s Brewery before. Just outside of Leicester city centre, near to Fosse Park, this is by the far the largest brewery we have ever visited, producing 120,000 barrels every year. I hope that’s right. I didn’t write it down.

We were taken on our tour by Quality Assurance Manager and renowned ‘Beer King’, Mark Tetlow. Mark was a fantastic guide, whose humour, passion and knowledge absolutely shone through. I think that it’s safe to say that as well as having awarded the title of ‘Nicest Guy in Wine’ I now have found the nicest guy in beer. He really gave us the full behind the scenes, no holds barred tour of the brewery and myself and The Boy were held captivated throughout.

We started at the beginning and the end – where the spent grain is taken for recycling, next to the area where the new malt starts its journey around the huge brewery. Mark took us up to where the hops are stored – a vast space with seemingly endless varieties of hops. Everards don’t just make their own signature beers, but a whole range of seasonal and limited edition beers, as well as brewing on behalf of other companies. They have up to 18 brewing slots, which can run up to three times a day, so that’s an awful lot of beer!

The hop pellets come vacuum packed to keep in as much of the flavourful oils as possible. We felt and smelled 6 or 7 different varieties, hops from the UK but also from the States and around Europe. I was amazed at the variety in texture and smell. Some of the pellets had a higher oil percentage and these were more pungent. There were firm, crumbly, green and brown pellets which showed excellently how beer can have just as much variation, depth and sense of terroir as wine.

This idea of terroir is also keenly felt at Everards in the water that they use. Called ‘liquor’ by the brewers, the water has salts added to give it the same ph as the water that flows in Burton-upon-Trent to give a characteristic and consistent character to the beers. I found this fascinating and it makes me wonder how much attention wine makers pay to their own ‘liquor’. 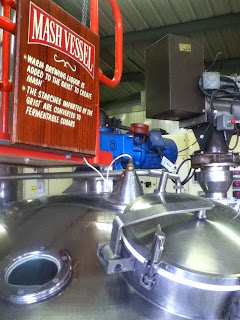 After seeing the hops, we followed the network of pipes around the factory, seeing huge shining stainless steel vats with valves and noise and steam as the brewing process took place – the milling, the mash, the adding of the hops in the copper – all taking place on a grand scale. We even met Mike, who was watching the latest batch of sweet wort bubbling away, like a giant witches cauldron. He seemed nice too, but we didn’t speak to him enough to give him an official title about his status of niceness in the beer industry. Sorry Mike!

After we had recovered from the excitement of meeting Mike, it was on to the fermentation tanks, another row of stainless steel soldiers. Luckily for us there was a batch that had been in for a week and was just about ready to go and a batch that had just been added to the tank that day so we could see the difference in the head as the yeast worked its magic. 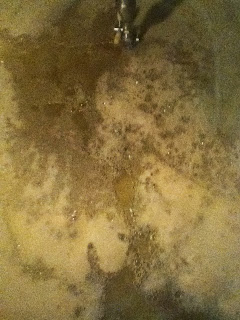 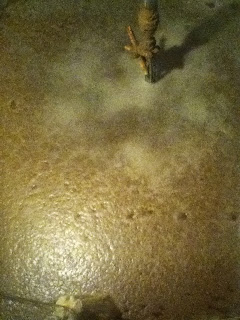 After the fermentation came the conditioning and the filtering. All of the beers follow the same process up until this point, where their lives take very different turns which in turn leads to a varied product. This was a much quieter area of the brewery, where the beer was left with all the time it needed to become a consistent and excellent brew. I imagine if they had been filling the kegs at the next set of machinery it would have been far less peaceful! 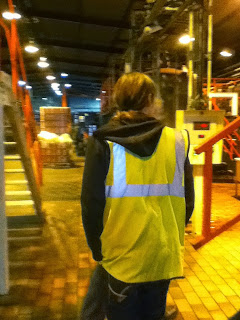 We saw the machinery for cleaning, steaming and sterilising the barrels and the kegs and learned about how some beer is pasturised and kept under pressure, while others are not, given them a shorter shelf life, but also a different flavour characteristic.

All of this amazing process, on such a grand scale is controlled by the Everards super computer. It takes up a whole room and having been installed in the 80s it will eventually be replaced by a single ipad! The computer took the form of a map of the brewery, showing what lines lead to where. The brewers move the connectors on the pipes to change the direction that the beer flows, like the tracks changing connection on a railway. My favourite part of the central command room was the dot matrix printer, that takes me back to my childhood! 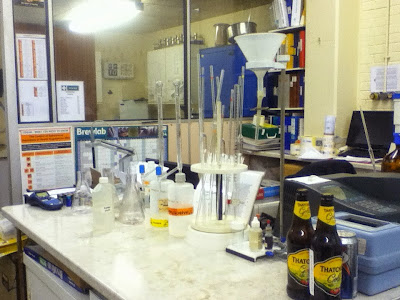 After all of this, Mark took us to the lab. We were both unreasonably over-excited by the idea of a Beer Laboratory. This is where Everard’s check all of their beers at all stages of the brewing process to check that it is consistent. They have machines to test every conceivable element of the beer, some which are incredibly expensive and fancy pieces of kit to test the IBU (bitterness) and other, perhaps more rudimentary, tests – if you want to check the haze the first thing you do is hold it up the light! We saw beers being checked for how they were clearing with the finings, there were gadgets and gizmos for checking the pH, the gravity, the alcohol content (that’s kind of the same thing isn’t it) and all sorts of things that a relative beer novice such as myself is baffled by. I just wanted to go and stand back outside until somebody shouted “Quick, to the Beer Laboratory!” but it didn’t seem appropriate to suggest in the circumstances. Mark may have indulged me though, after all, he is a nice guy. 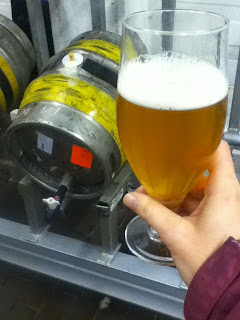 And finally we went to a room where kegs are conditioned and checked, to ensure that the uniform quality of product that goes out to the pubs conditions as it is supposed to – they know exactly what product the pubs have in their own cellar conditions. And hurrah! It was time to taste. We had a delicious blast of citrusy Sunchaser, an old favourite of mine that I was happy to revisit.

We both tried the Regimental IPA, a hit with The Boy, who loves the floral nose and the hefty bitter kick. It was then we found out that this beer has a really interesting story. It was actually developed on a brewing course that Everard’s runs for their tenants. They learn about the process and then have a go at creating their own recipe, brewing it, naming it and creating their own pump clip artwork. The Regimental was a successful outcome of this process which is still going strong. We found out that some of the beers had been picked up by national pub chains and been distributed across the country. I think it must be so awesome to have that happen to a beer that you invented in three days! I also love the idea that Everard’s gives this really tangible experience to its landlords and landladies. We found just visiting the brewery to be inspirational, so I can’t imagine how excited you would be about beer after creating your own recipe for the first time. 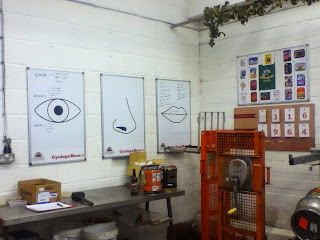 Mark also told us about the Cyclops scoring system which he created to help customers to identify the colour, smell and taste of different beers, which is helping people across the country to learn to recognise the characteristics of beer they enjoy and encouraging people to be more adventurous in their beer selection as they feel more confident in trying something new, but with notes they already know that they enjoy. This system is now being used by an impressive 316 breweries across the country, it has become something of an industry standard!

And all too soon, it was time to go. I was truly impressed to Everard’s commitment to sustainability and recycling throughout the process, their attention to detail and consistency in creating high quality products and also I really enjoyed the true mixture of local and national that the brand represents. Truly Everards is a name that Leicester can be proud of.