Leicester is a great place to eat, drink and make merry. 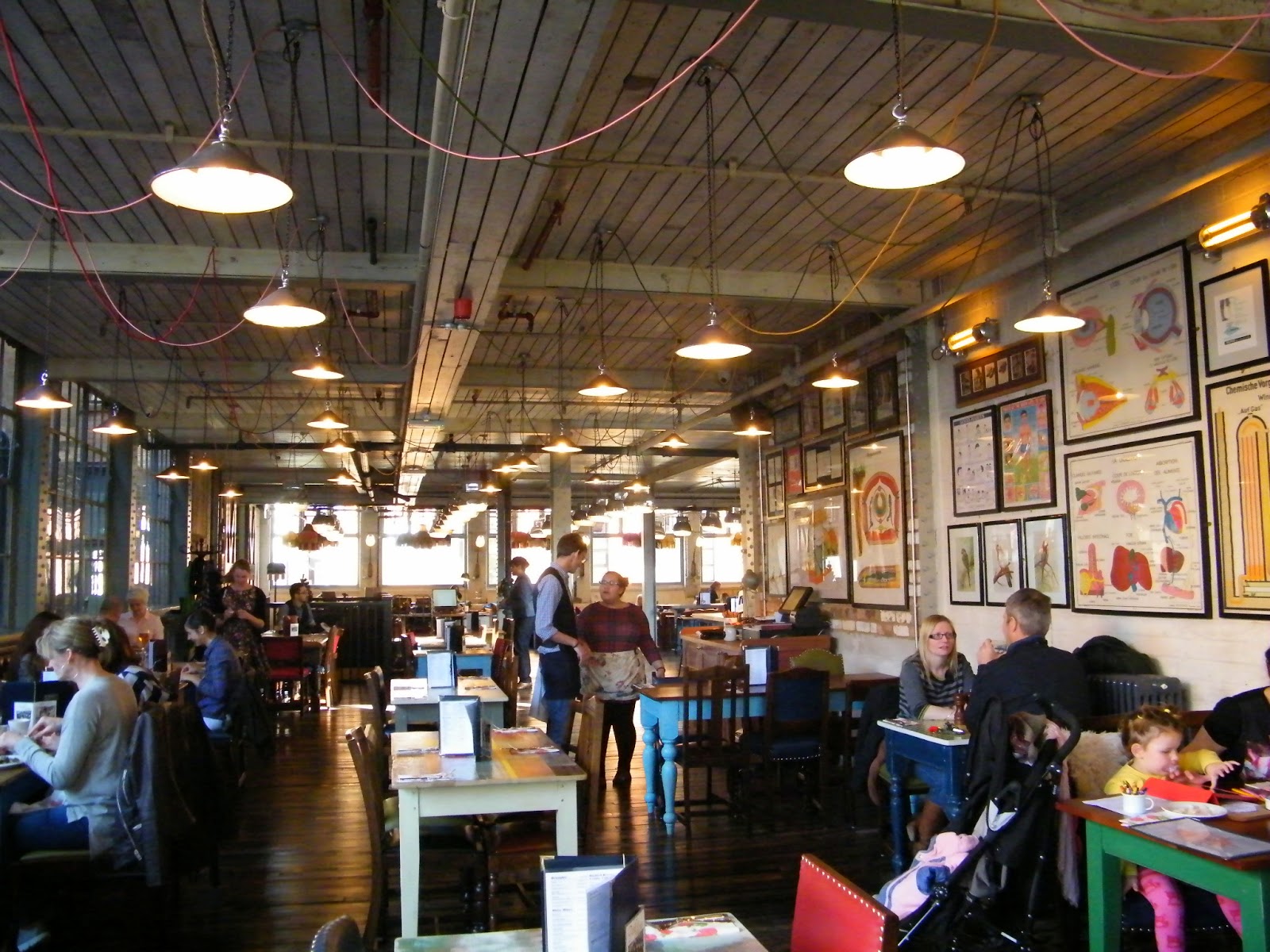 I’ve spent a decade in this city now and the whole time I’ve heard people moaning about the standard of restaurant, the quality of the pubs and the general lack of anything to do.

It is simply not true. Absolutely diamond quality, excellent bars, pubs and restaurants seem to be popping up on an almost weekly basis in the city. Leicester is great.

We have the best curry in the country. That goes without saying. However, we also have juicy, medium rare burgers, black pudding scotch eggs, intimate cheese and wine tasting events, and safety conscious potatoes. Leicester is on the up in the gastronomic world, and now we have a new small chain joining the ranks. 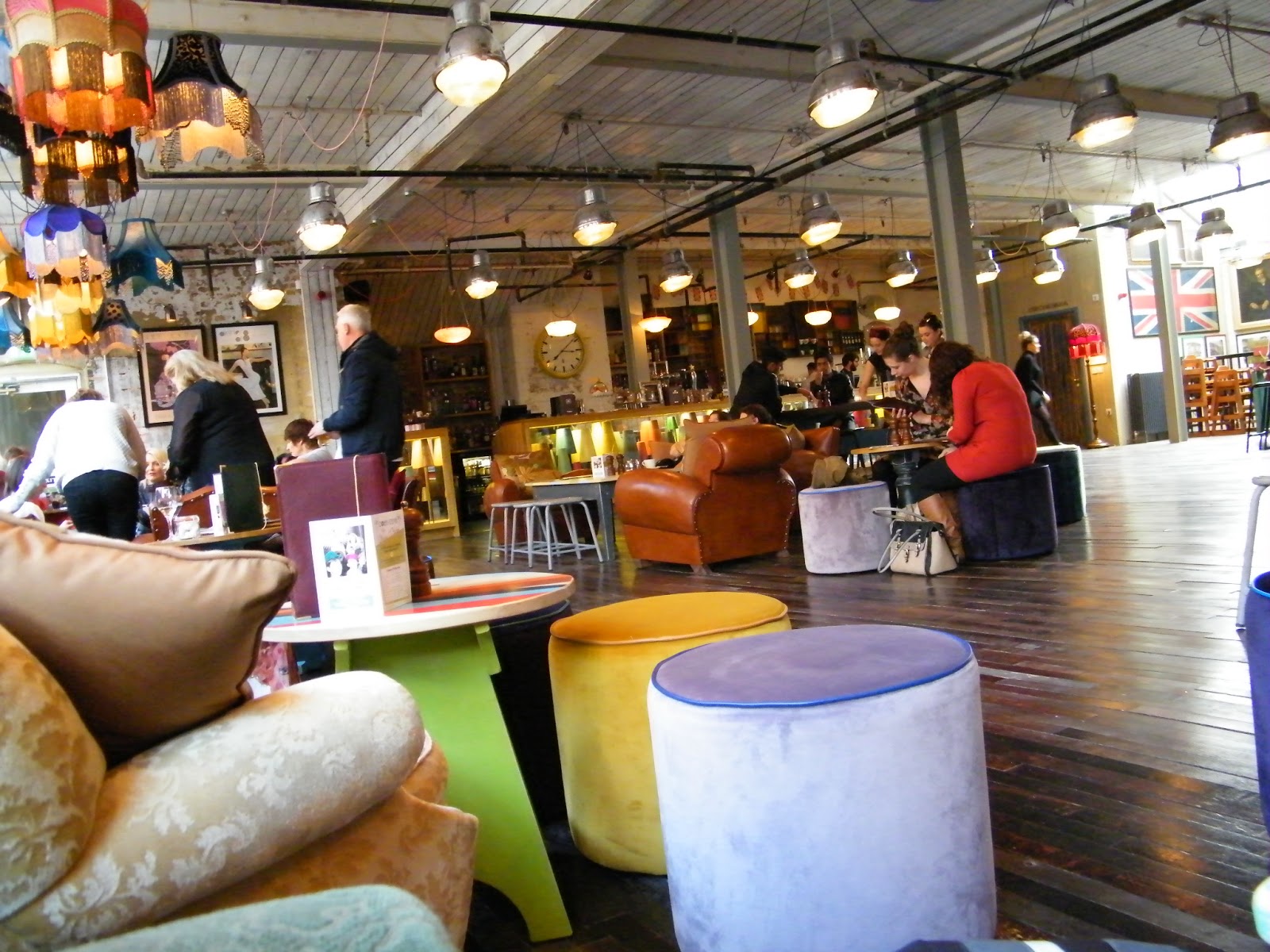 The Cosy Club has made it’s home on Highcross Street, in an old hosiery factory that I’m pretty sure has stood derelict during the whole time I’ve lived here. Because of that, it was a real surprise to see just how open, light and airy the place is. It’s huge! The factory has been so sympathetically renovated, keeping all of the character and a tonne of period features but with an added layer of funky artwork, splashes of bright, colourful upholstery and a real magpie sense of decor that is just on the right side of cluttered. I adore it. It’s so, well, cosy!

As well as the open, light main floor, there is also a smaller area downstairs that is available for hire. And they have a small, but perfectly formed outdoor terrace at the back, where you can sit and sip a cocktail and admire the industrial city centre skyline. Plus they have a big basket of blankets by the door so if it’s a bit chilly you can get cosy with a layer of fleece over your lap. They appear to have thought of everything. 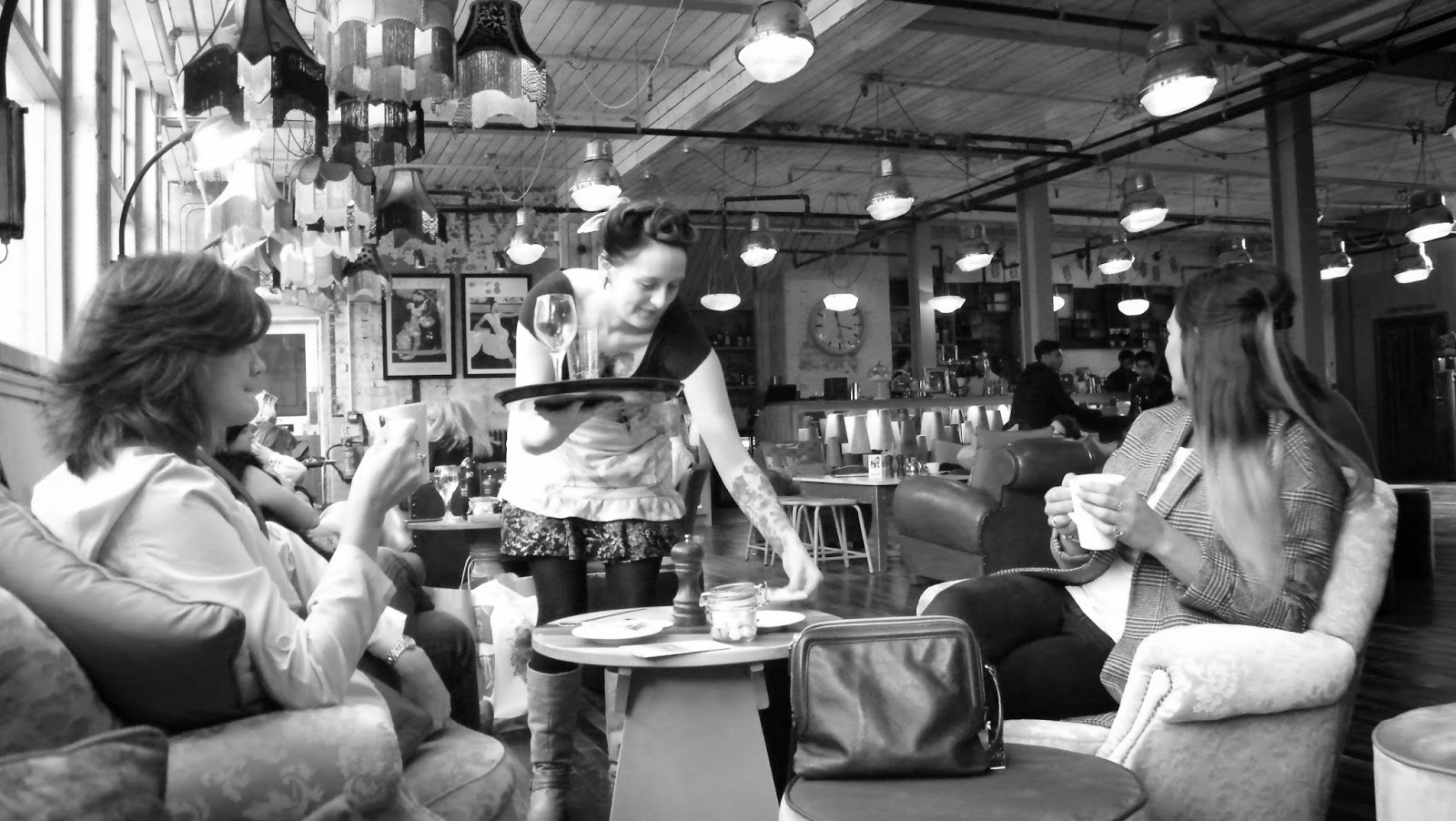 And, as a North-West girl at heart, it does me good to hang out in a place that really reminds me of the excellent conversions that we’ve been seeing for many years now in Manchester. It really has that hip vibe, without being overly trendy. Indeed, while we were there we could see that it is a super welcoming, kid friendly venue, at least in the daytime.

Once again, this is a new Leicester institution which has extremely welcoming, friendly, knowledgeable and relaxed staff. We were well greeted and seated and given plenty of time and space to settle in and to choose from the menu. The food on offer is varied, interesting and reasonably priced. They serve brunch – until 6pm. Already a good start. There are a variety of mains, tapas, panini, burgers and sharing options – definitely something for everyone if making for a slightly overwhelming menu.

The Boy and I opted to split a couple of starters, in the interests of research. We got the Squid and Spanish Chorizo salad. This was a vision in red, with the paprika oil of the chorizo being soaked up by the butter beans, the whole thing giving off an appetising aroma as it was served warm.

The butter bean aioli, smeared on the side of the plate was creamy and just the right hint of garlic to complement the rest of the flavours. The squid was soft, but still with a decent amount of bite without being chewy – perfectly cooked. This is an ideal combination of flavours, and I just had one small issue with it that stopped this dish from being absolute perfection. There was three pieces of squid in it. Three! Which was not what I expected from a salad in which ‘squid’ is billed as the key ingredient. And also is a bit irritating when the squid is so nicely cooked.

At the same time, we also tried the salad of smoked bacon, black pudding, olive oil croutons and poached egg. Let me tell you now, this wins. Hands down, no questions asked, might as well just pack up your s**t and go home right there. This is a magic piece of epic awesomeness. A bed of salad leaves, topped with crispy bacon, the most flavourful, delicately spiced black pudding from Yorkshire with robust croutons. Sat atop that little lot is a perfectly poached egg, which, when broken open oozes smooth, silky yolk over everything. All of these decadent, smooth and interesting flavours are then cut through perfectly by the tang of the lemon tarragon dressing. I could eat it for every meal, every day, forever. It was mind blowingly wonderful. Order this dish.

They set a pretty high standard with the starters. We were aglow with wonder and absolutely gagging to find out what the mains would be like. And we did not have long to wait – as well as being warm and friendly, the service is also deceptively efficient, with attentive staff clearing plates and bringing new dishes in perfect time for you to enjoy your dining experience to its fullest.

I plumped for the duck confit, which was served on a huge bed of puy lentils, a generous serving of honey glazed vegetables and a red wine gravy. Again, perfect. I have no criticism that I can level against this dish. The flavours balanced so well – the sweetness of the carrots and parsnips cut so well through the crisp skin and rich meat of the duck. The duck was tender, as were the lentils. The whole was incredibly well seasoned and tied together by the sauce as well as The Dude’s rug tied the room together. It made me happy and is possibly now my favourite Autumn meal in the realm.

In our quest to give you the fullest perspective on everything, The Boy went for a burger. It was in fact a Hero hamburger. It already featured chorizo, mature cheddar, red onion, chipotle mayo and marinated chilli. The waiter turned his head with additional bacon and cheese, although he could not be convinced into having an additional patty. I think he may have died of too much meat if he’d had that. 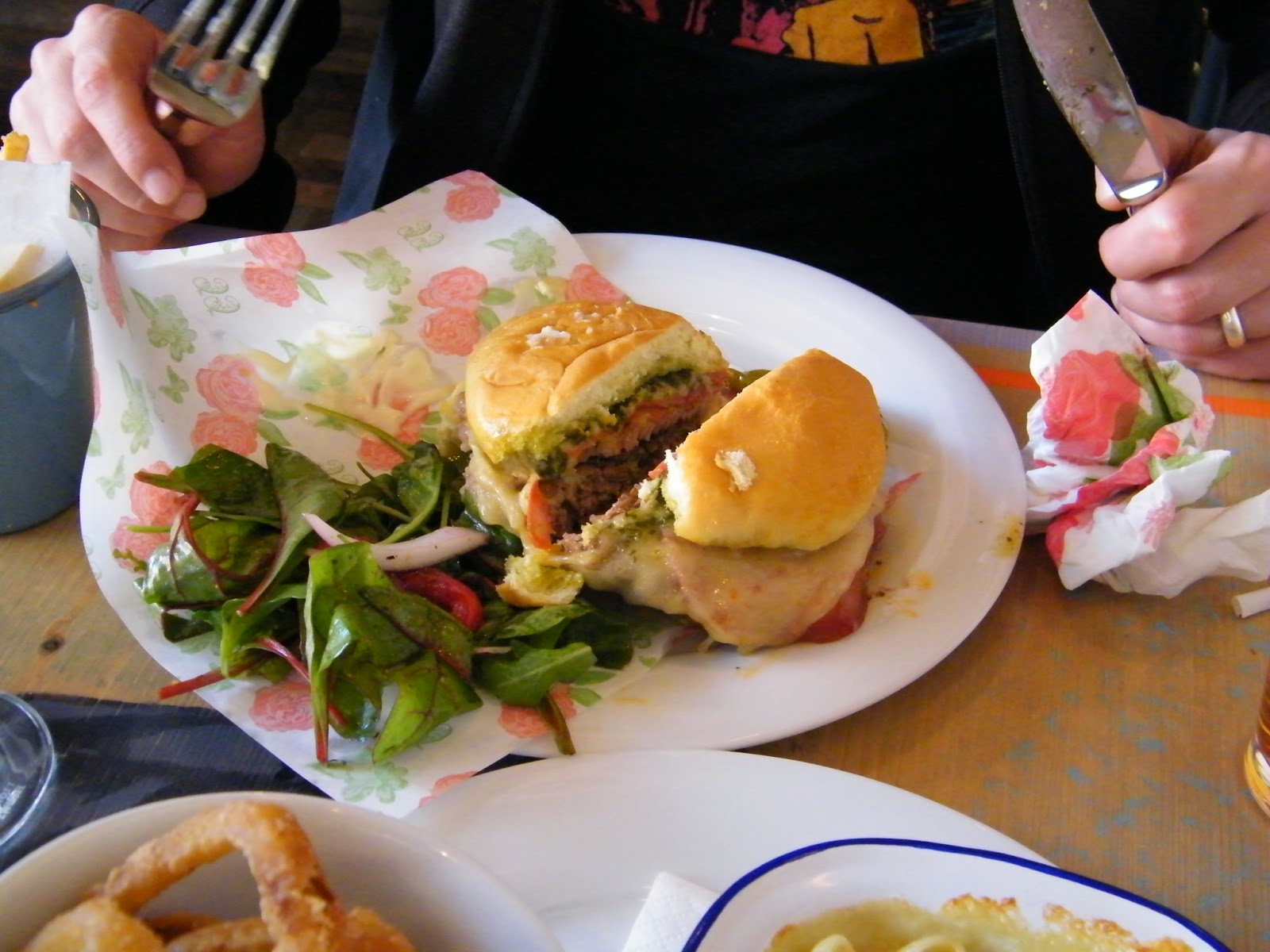 Served with a light salad and skin on fries, this was a pretty epic burger. Not quite served medium, which would have taken it right up to the next level, it was still a great combination of flavours and, as you can see from the photo, the sort of over-stuffed, decadent burger that one can only eat with a knife and fork, for fear of otherwise throwing the entire contents of the bun down ones lap.

The onion rings were large, homemade, had a fantastic audible crunch and a satisfying follow through of sweet, soft onion. You’d think there’s not a lot to get over excited about when it comes to onion rings, but, I must admit, they were rather memorable.

It would have been remiss of us also had we missed the opportunity to continue our search for the Best Mac N Cheese on Earth, since it was on the sides menu. This mac n cheese was different because it had a truffle cheese sauce. This made it earthy and rich on a level that one doesn’t normally see. It was a rather wet mac n cheese as well – the American ones tend to have a much thicker sauce which sticks to the pasta, but this one was very saucy – it tasted great and you’ll have to decide for yourself what your favourite level of saucing is with this particular dish. Or I’ll devise some kind of scoring system and then we’ll get this issue sorted out once and for all. 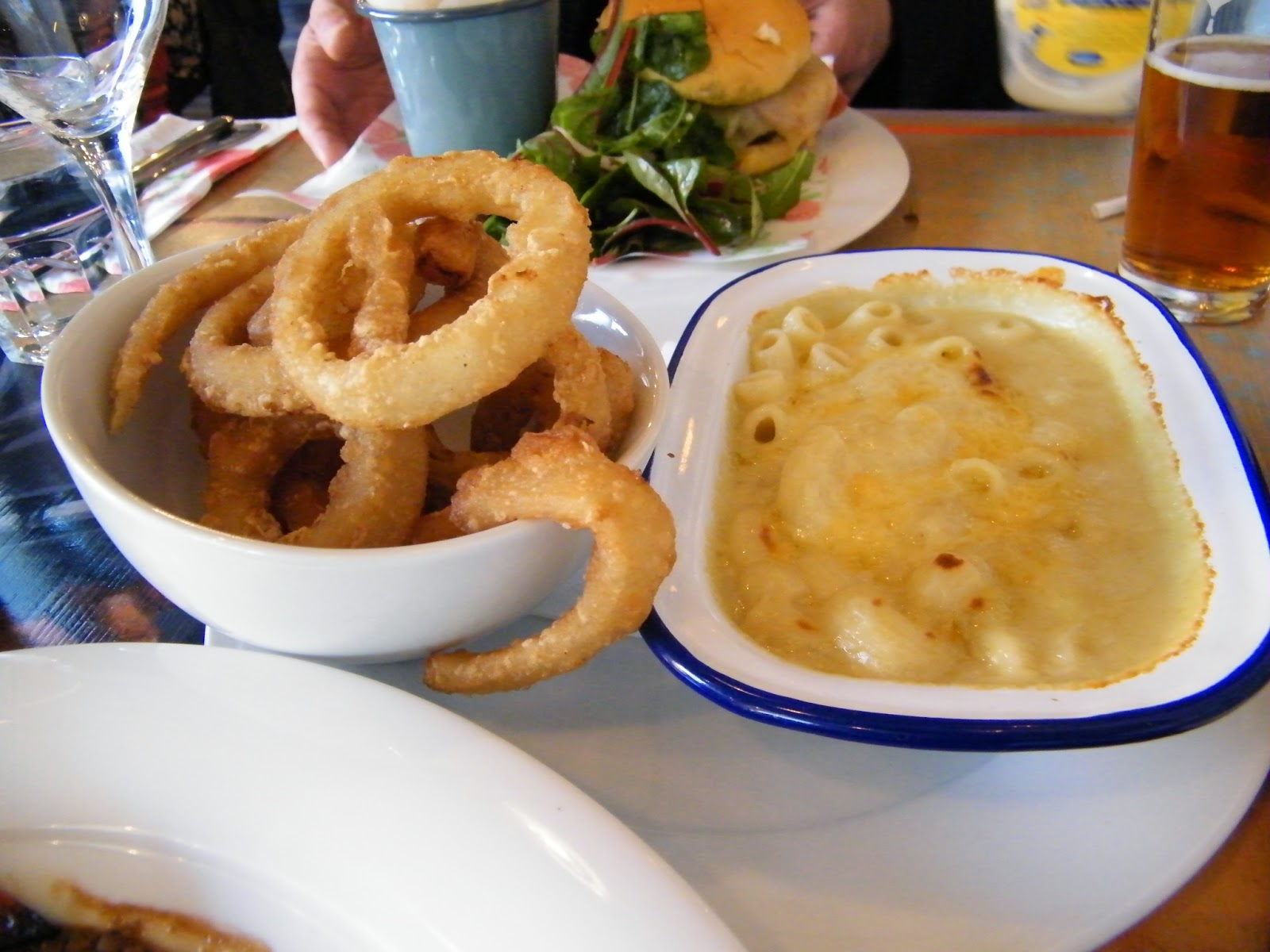 And so it came to pass that it was time for dessert. We were already full – we had asked for half of our mains to be boxed up later (which coincidentally really helped to put everything back in mind for this review) in preparation for being able to manage a pudding. Weirdly, they do not seem to have stocked boxes for people to take away unfinished meals – I hope this changes because the food is so darned good it would be a crime to throw it away.

The ‘Snowball’ cheesecake came recommended to us by the host, and who am I to refuse a solid recommendation? It was worth following up, if not just for the paper doily under the jar. And it came in a jar. All the hipster, all in one dessert. I bet they have a little blow torch to toast the mini marshmallows on top with as well. I bet Jamie Oliver looks upon the Cosy Club with real terror. I do love a doily. 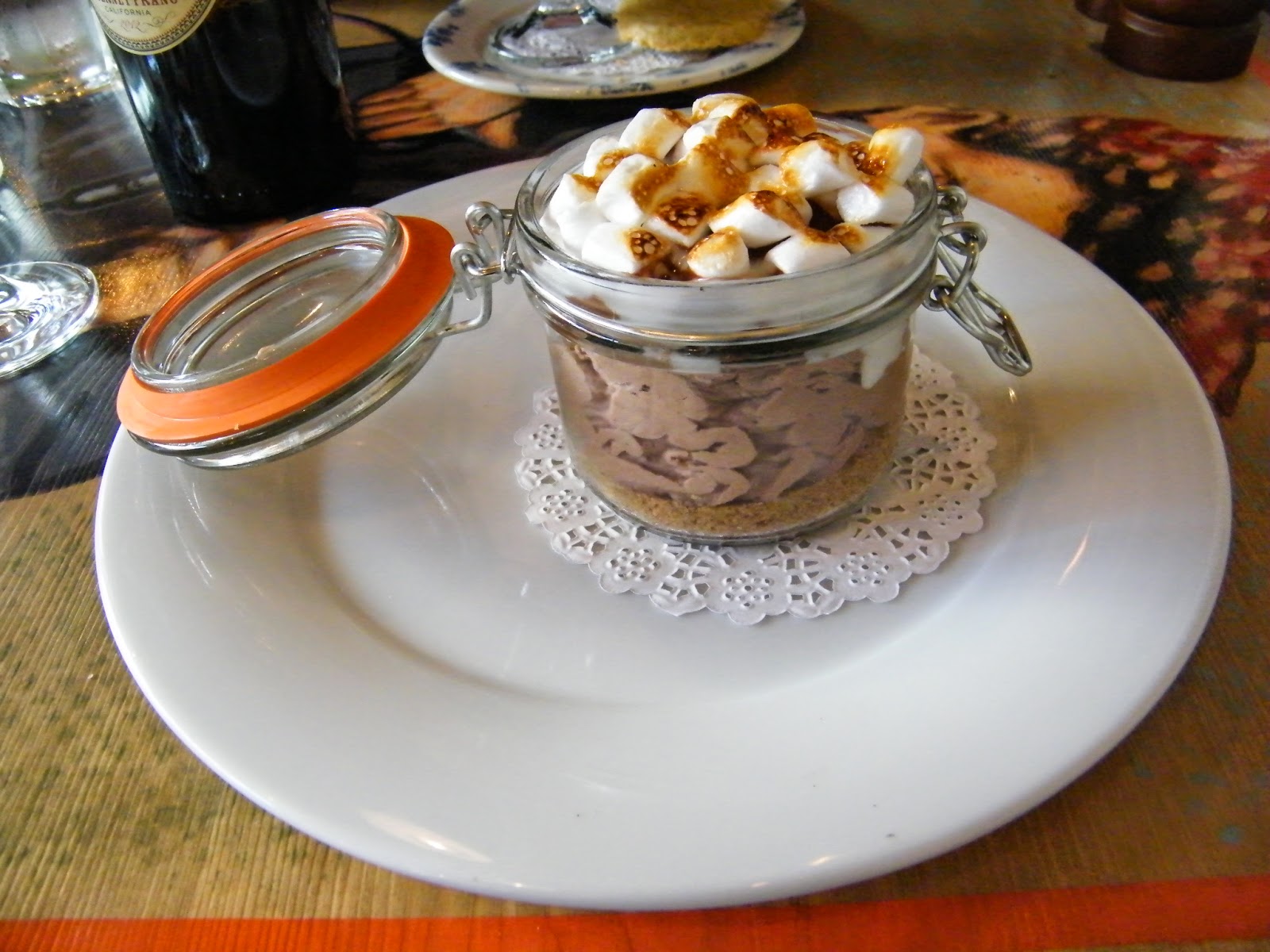 Again, this was another taste sensation. There is a hint of coconut in there which mixes with the chocolate cheese, rich and smooth, and the toasty marshmallow flavour which gives you the perfect feel of a chocolate teacake. Like a Dunnocks, but it lasts more than approximately 2.84 seconds. Deliciously lenient, it is like a cuddle from baby pugs in the snug of a bug’s rug. Nom. 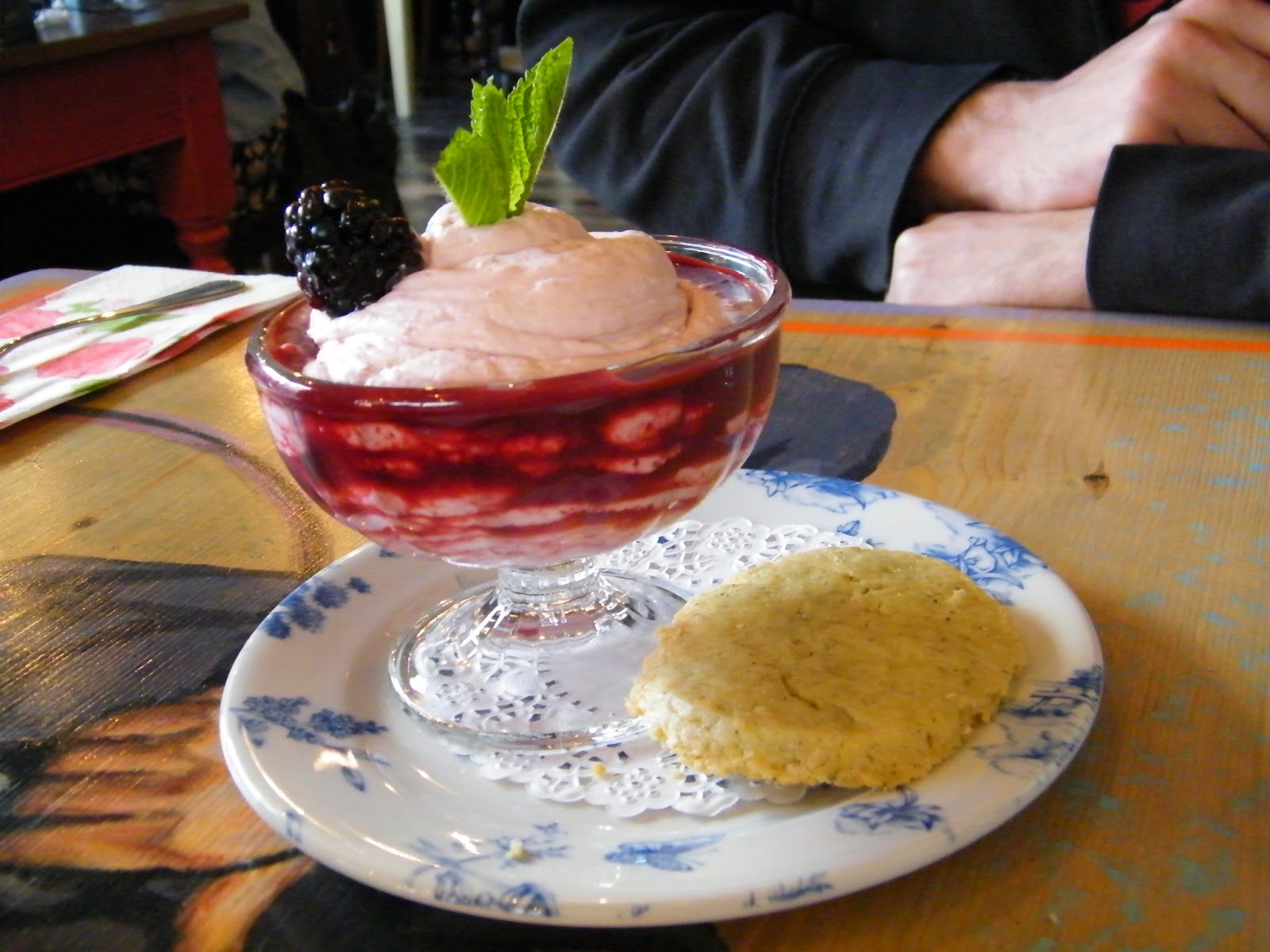 The Boy wanted something lighter and so opted for the blackberry syllabub, which was sharp enough to carry the blackberry but still somehow homely and velvety. The lemon thyme biscuit was a good texture mix, also being light and crumbly, although I struggled to taste the lemon thyme myself. It also had a real tang from the additional blackberry sauce which worked beautifully. I don’t think they could have got the autumnal flavours more right on the present menu. 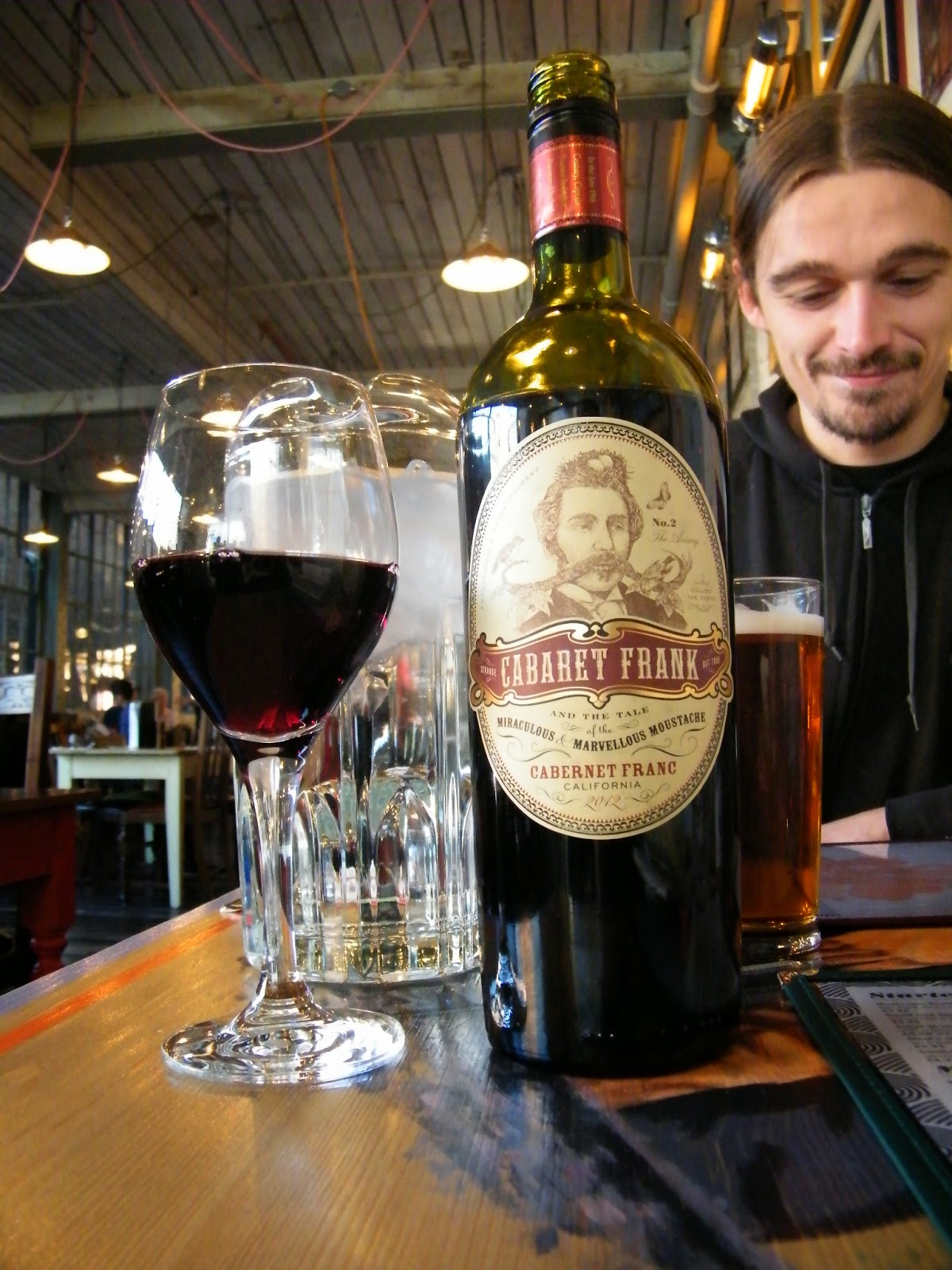 And of course, I haven’t mentioned the wine! I was mentally excited to see two decent looking Californian reds on the menu and so I had to give one a go.

Bottled in France, this cabernet franc is light on the nose – almost reaching that round Californian sunshine smell that haunts my dreams. It has a real sweet punch initially and then mellows to a medium bodied savoury flavour – an interesting flavour journey throughout the drinking and then it fades out to almost nothing on the finish and so is light and easy drinking. The flavour is a rich, deep cherry which I thought complemented the duck confit particularly well. Definitely worth exploring if you are unfamiliar with the cabernet franc varietal.

Now I can’t wait to go back and try the Californian Zin that was also on the menu. And we will be back. Cosy Club by name, cosy club by nature, this place is light hearted and fun, but with real quality cooking at its heart. Comfortable and chic, it’ll be great for after work drinks with friends or for an intimate meal with a special someone. I love its vibe, I love its versatility, I love that I have yet another fantastic place to visit within 3 minutes walk of my office.

Thanks to Cosy Club for inviting us down, you’ll be seeing us again.