We were invited to an evening of celebration at Coast to Coast, Leicester, last week. I have enjoyed their menu since the first time we visited at their launch and we have continued to go back as the potato skins are just so yummy.  They were launching their new festive menu and, in mid-October, we got an advance taster of the lovely things that are to come. 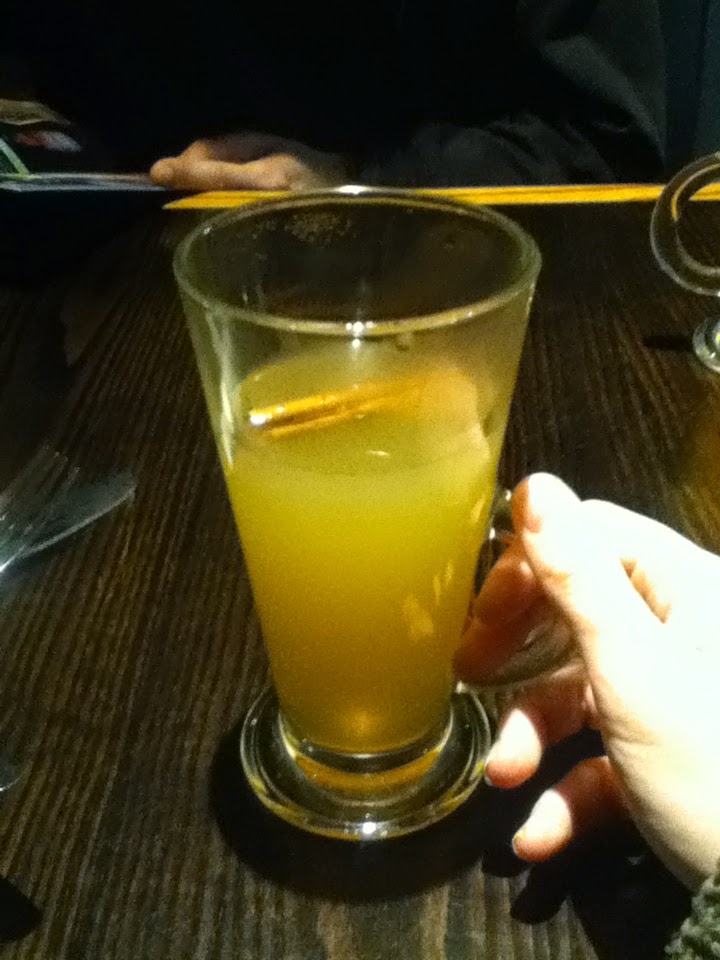 Twas a dark and wintry evening, and so our welcome drink of warm Spiced Apple Cider went down an absolute treat. I’m normally not a big fan of mulled drinks, but this was just perfect – it tasted just like warm apple pie (in a totally non-innuendo based way) – sweet, warming and with a perfect hint of cinnamon. It really set the mood and whetted our appetite for what was to come.

And what followed was an exclusive cocktail masterclass, led by mixologist Andy Pearson, a super fun but obviously massively knowledgeable chap who has been working with Coast to Coast on their drinks menu development since the very beginning. We worked our way through making the perfect mimosa, a traditional egg nog, and on to the more unusual chocolate orange martini. As well as seeing how it was done and having a taste, members of the group also got to have a go at putting the new skills they had learned to the test – including me! I took so many photos that I decided to make a little video, break up all this reading for you a little bit.

In case you were wondering, the music is Ice King Christmas Ninja Party by Jonathan Mann, taken from http://freemusicarchive.org. There’s a whole album of craziness on there. You’re welcome. The Snowman was the final cocktail with which we finished the evening, but you’ve seen it now so I might as well include it here.

Mimosa
A traditional American favourite, this is a Bucks Fizz with an extra kick. Light, freshing and not too sweet, this takes you straight in to that Christmas morning celebratory feel. An excellent way to start a fun evening with friends.

Egg Nog
Not as thick as we were expecting, despite the thickening effect of the whole raw egg that is shaken in to it. Contains delicious gingerbread syrup – the very essence of Christmas – which made its way in to a whole lot of the cocktails. Creamy, without being heavy or sickly, this would be a good alternative when there’s just no room for pudding. 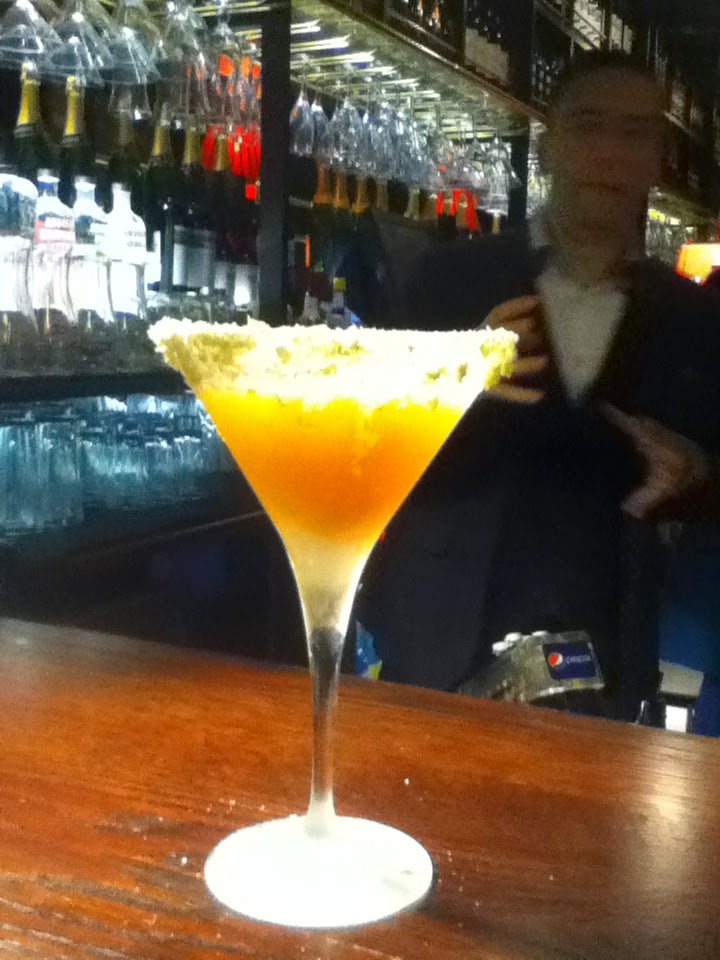 Chocolate Orange Martini
By far the favourite cocktail of the night, so much so that we ran out of chocolate liquer-syrupy stuff and had to improvise when making The Snowman. Although a light, translucent drink, this is absolutely full of sweet chocolate orange flavour – it somehow tricks you into thinking you are drinking a Terry’s classic. The white chocolate ‘snow’ around the glass is a beautiful touch and also adds that additional and optional creamy texture. Very potent though – maybe just stick with one!

The Snowman
The fun cocktail of the evening complete with carrot nose and matchmaker arms, you really can’t get more Christmassy. It is creamy, sickly, sweet and delicious – when all you want to do is treat yourself to something excessive over the Christmas period.

In between the wonderful cocktails, we were introduced to Executive Chef, Jim Dickenson, who walked through some of the menu options that will be on offer for the Yuletide season. The menu offers three courses for £24.95 – a pretty competitive price looking at the seasonal menus that I have started to see pop up around the city. If you want more information, check it out for yourself here. 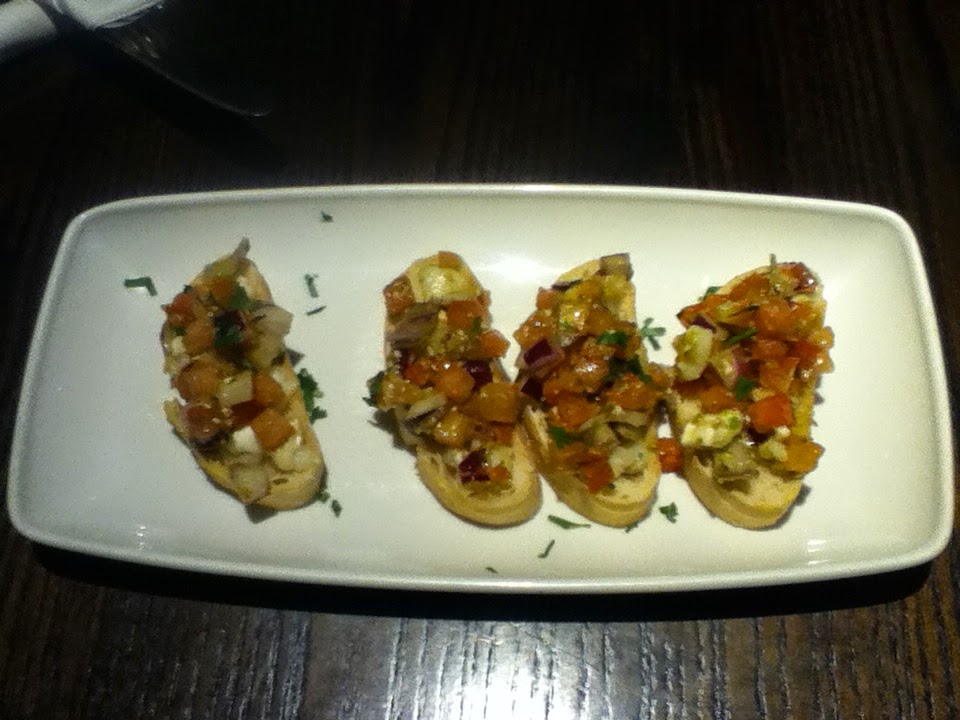 We started off with the Goat Cheese Bruschetta Bites. These were crispy, warm mini ciabatta slices, topped with a fresh tomato, goats cheese and pesto topping. The soft, luxurious topping provides the perfect textual counterpoint to the crunch of the bread. Although simple, it is really well executed, providing a delicate basil hit which works really nicely with the sharp goats cheese. Really nicely balanced, there is just the right amount of cheese so you can taste every element and the cheese does not overpower. A good light starter if you are (quite rightly) concerned about being able to chomp your way through three of Coast to Coast’s legendarily large portions. 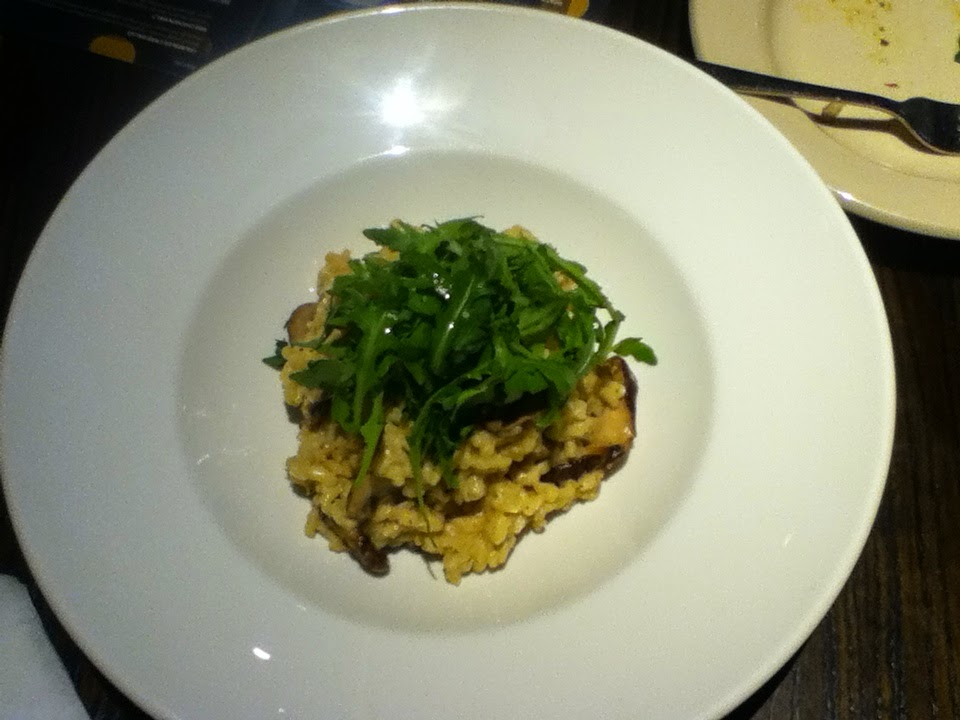 Next came another vegetarian option, the mushroom risotto. This is made with five different types of mushrooms and is served with a lightly dressed rocket salad on top. It is creamy, earthy and homely, a real fireside winter warmer. I felt that the one we received was ever so slightly underseasoned for my palette, but that was my only criticism.

As we had the option to chat with the Executive Chef, I took the opportunity to ask why a mushroom risotto was being served in an American themed recipe. It was really interesting to find out that while Coast to Coast pride themselves on their American inspiration, they are still trying new ways to introduce new flavours and ingredients to the British palette – the rack of Louisiana ribs, for example, was clearly a source of some confusion to some guests, who have simply never come across a whole rack of ribs in a restaurant before! The risotto is another of those compromises – big on taste, and certainly something you would find in the States, but not quite as American as egg nog, evidently Coast to Coast still have a way to go to bring everyone round to their exciting flavours. 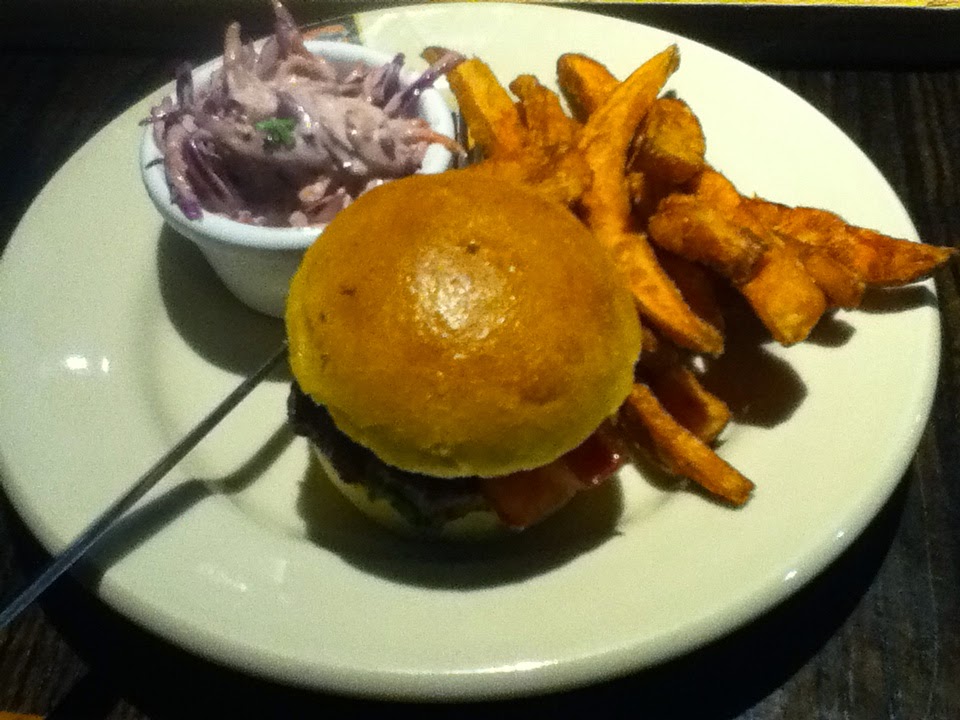 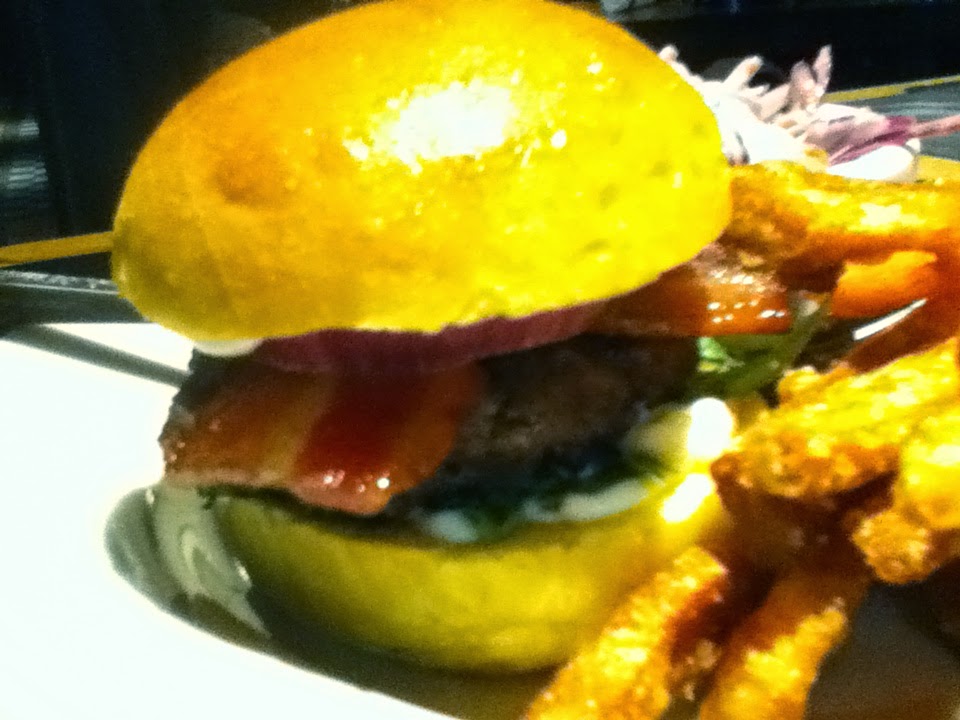 The next dish was the Maple Burger – served to us for tasting as sliders (which was great as we were already getting pretty full!). The maple bacon on the burger was crispy, sweet, salty and delicious – a truly American flavour. It was in a decadent briache bun and this was served with a light and refreshing homemade coleslaw and crunchy fries. Once again, a textural delight.

Sadly, there wasn’t time for us to try the Roast Turkey Dinner. You’ll just have to go and try that for yourselves. But I can tell you that it comes with pigs in blankets, which means it is a winner in my book. And we went crashing onwards, in to dessert. 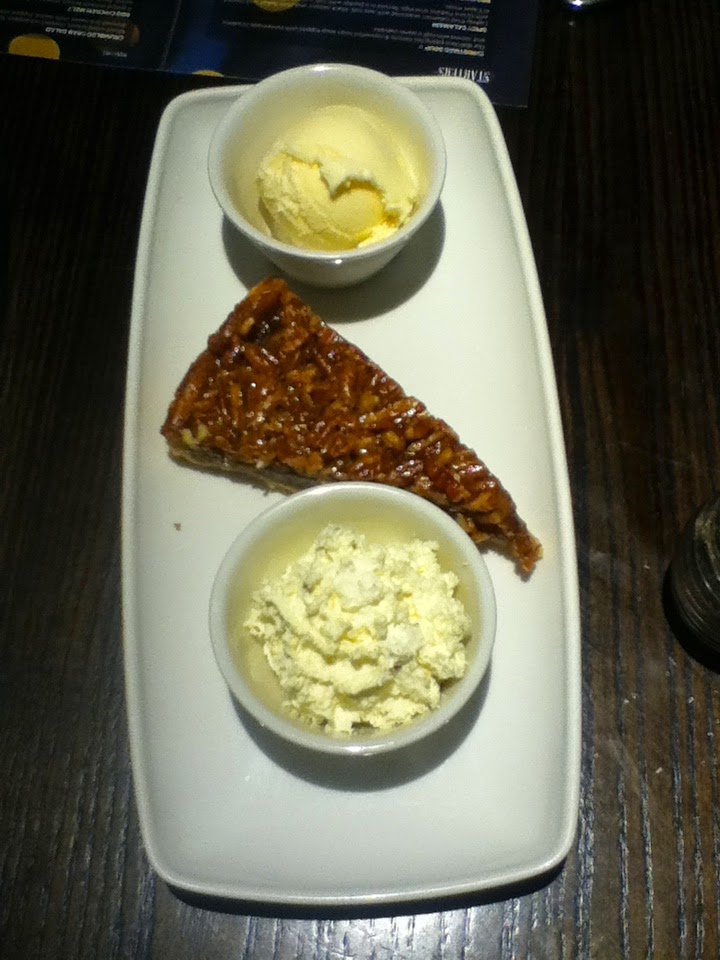 The desserts were by far the highlight of the menu. We tried the Pecan Pie and the Cookie Cheesecake. Both absolute American classics, served with a scoop of ice cream and a pot of house chantilly cream.

I could not pick a favourite and I cannot emphasise enough that these desserts are both completely excellent. The pecan pie is sweet and crunchy with perfectly caramalised pecans generously topping a crisp pastry. 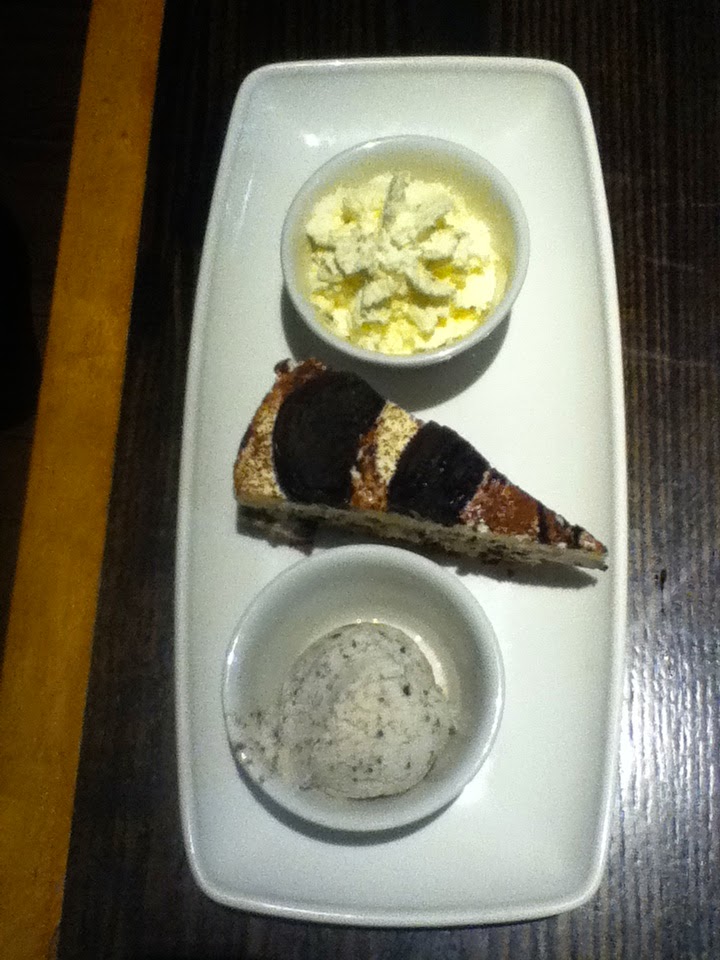 The cookie cheesecake features Oreos on top, oreos in the middle and oreos in the icecream. If you like Oreos, you’ll be happy. It’s chocolatey and thick, indulgent and heavenly. You’ll be licking your spoon, licking your plate and, if you eat anything like me, licking your fingers at the end.

Thanks so much to Coast to Coast for inviting us along. It was a fabulous evening and a real pleasure to get the chance to talk in so much detail to the chef and mixologist about the menus, the American inspiration and much more besides. I don’t know where we’re going to be going for our Christmas meals with friends and colleagues this year, but Coast to Coast have certainly put in a strong bid to be on my list. Their menu is indulgent and ever so slightly wicked, American themed but with strong roots in tradition, and most importantly, delicious. 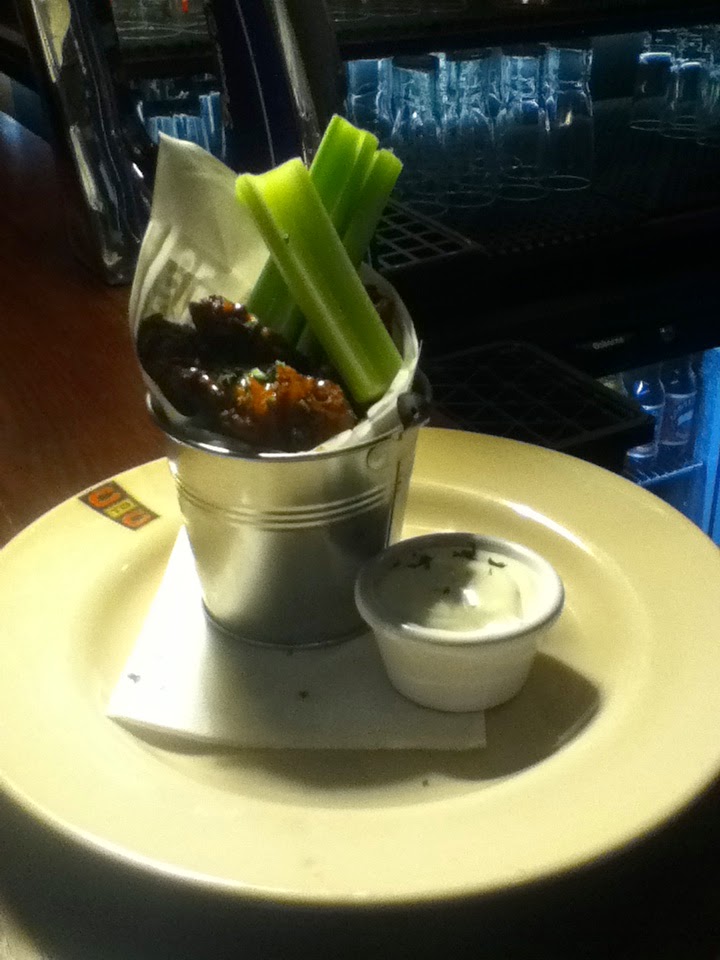 Extra special thanks to them for providing The Boy with a portion of wings. He is determined to try his way though all the Buffalo Wings in the world in order to see if he can ever find any that beat those at 99 Bottles of Beer on the Wall in Santa Cruz, CA. He was SO happy – they were almost perfect in terms of hot, thick, spicy and flavoursome sauce over fried wings and served properly with celery and blue cheese sauce. I am concerned my husband is becoming a Buffalo Wing Nazi.

Anyway – Merry Christmas everybody – whenever you want to start thinking about it.