Apologies for the radio silence… Is anyone still there? I’ve been on holiday and sometimes being away means having a break from it all – including blogging. I’ve been a little neglectful in my blogging duties, but now I’m back on it. 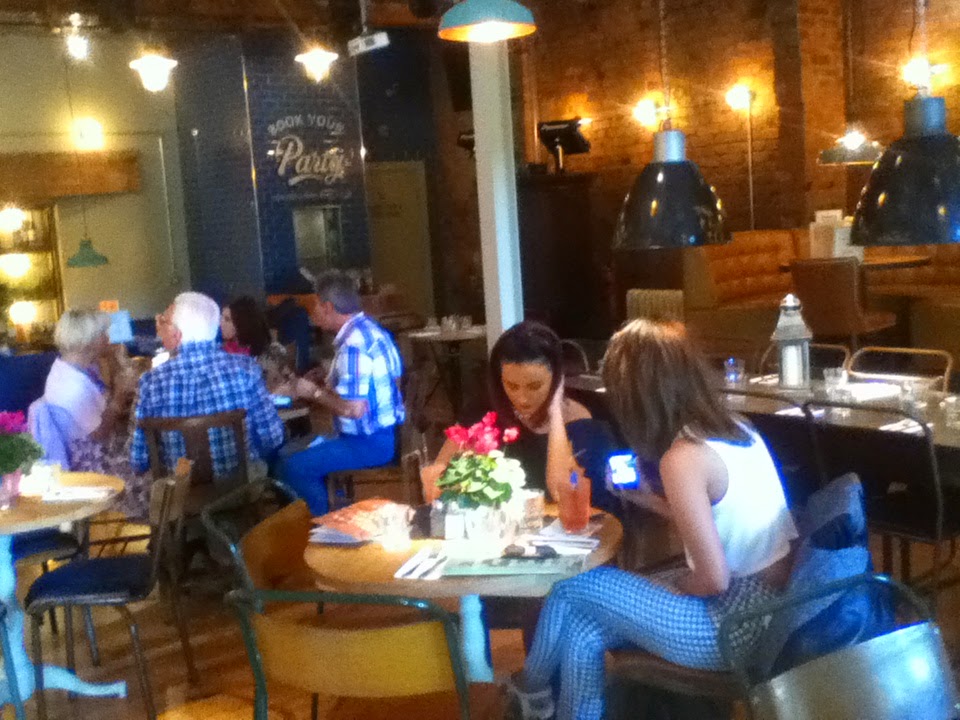 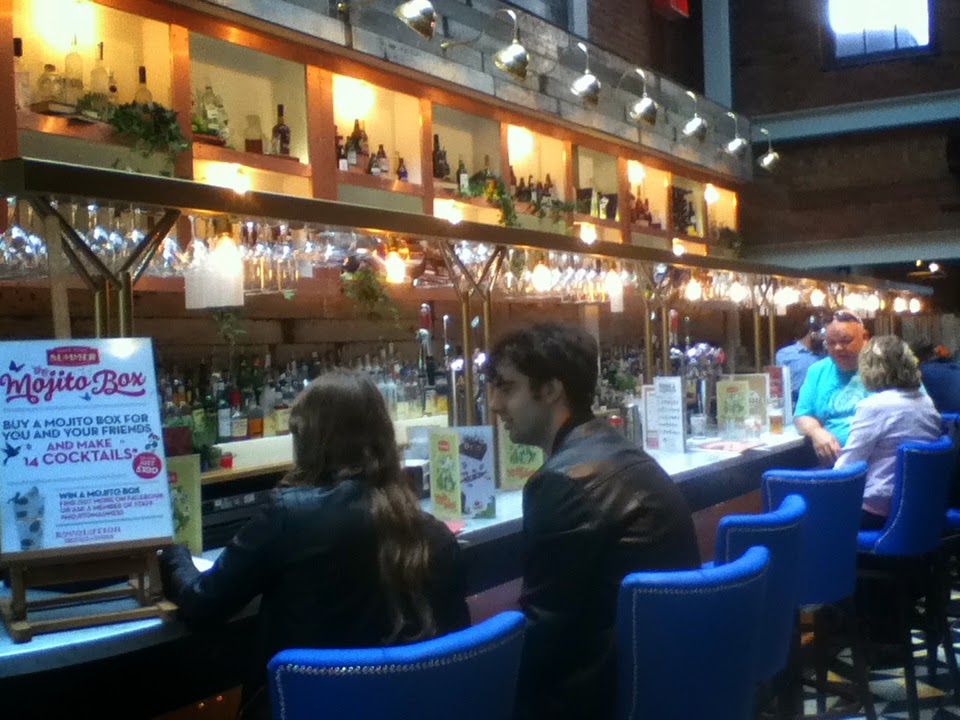 Anyway, we headed out a couple of weeks ago to the relaunch night of Revolution in Leicester. We used to visit the old Revolution quite regularly, until they stopped doing food and only opened in the evening, then it was not really on our rotation anymore. I was pleased to see them refurbishing and coming back with an improved menu as we had tried their sister bar in Loughborough and were impressed with the fresh, airy feel.

The new look in Leicester has a similar vibe. They’ve opened the place up a lot more, so there is several degrees more natural light in there – taking away the slight underground ambience of the old bar, which I love. Care has been taken of the detail of the décor, meaning that they have a really nice variety of well crafted accessories hanging round – lampshades made from old light bulbs, a good range of mismatched, but well thought out furniture and a giant vodka sign in aged girder style lettering above the bar. It gives a hip, boho feel to the place which is really comfortable and welcoming. For a vodka bar, it’s very much in the style which is becoming increasingly popular in Leicester – not too far into hipster, but just cool enough to be relaxing. 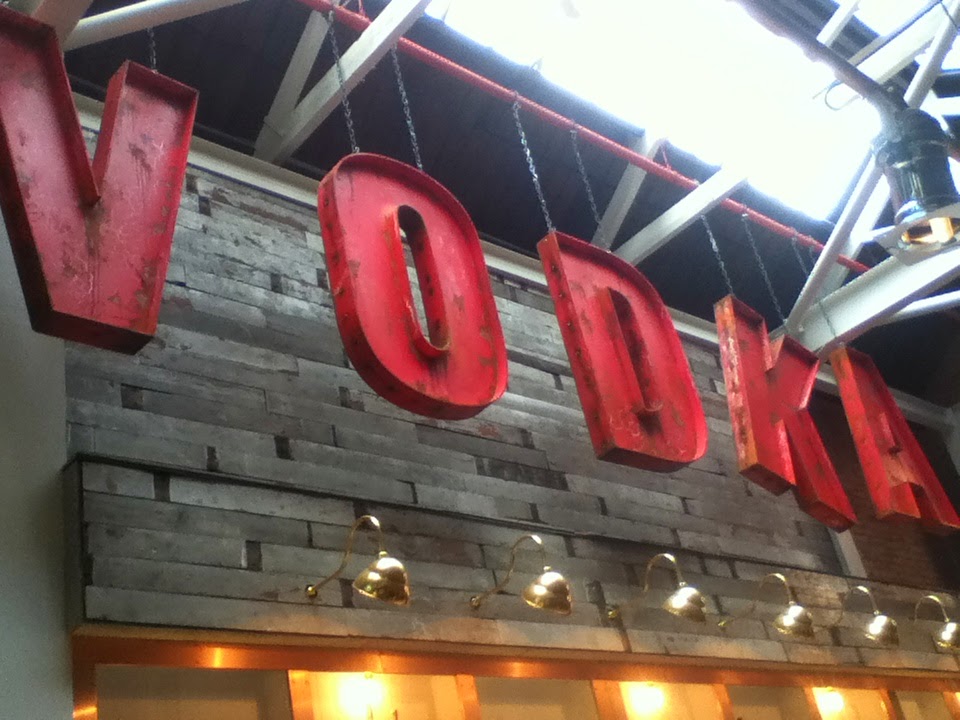 The relaunch night was really fun. They had laid on a whole programme of activity across the day to introduce the full range of their offer. When we arrived in the early evening, there was a free barbeque on the terrace and an acoustic guitarist to serenade you as you ate. They had a homemade blueberry ketchup which was awesome – that’s a definite reason to visit again. The staff were really welcoming and friendly and there was a real buzz about the place, you could see that they were really excited for the new feel of the place and to part of a new venue in Leicester. They gave out tasters of mojitos as you arrive, all served with a smile and some light banter. 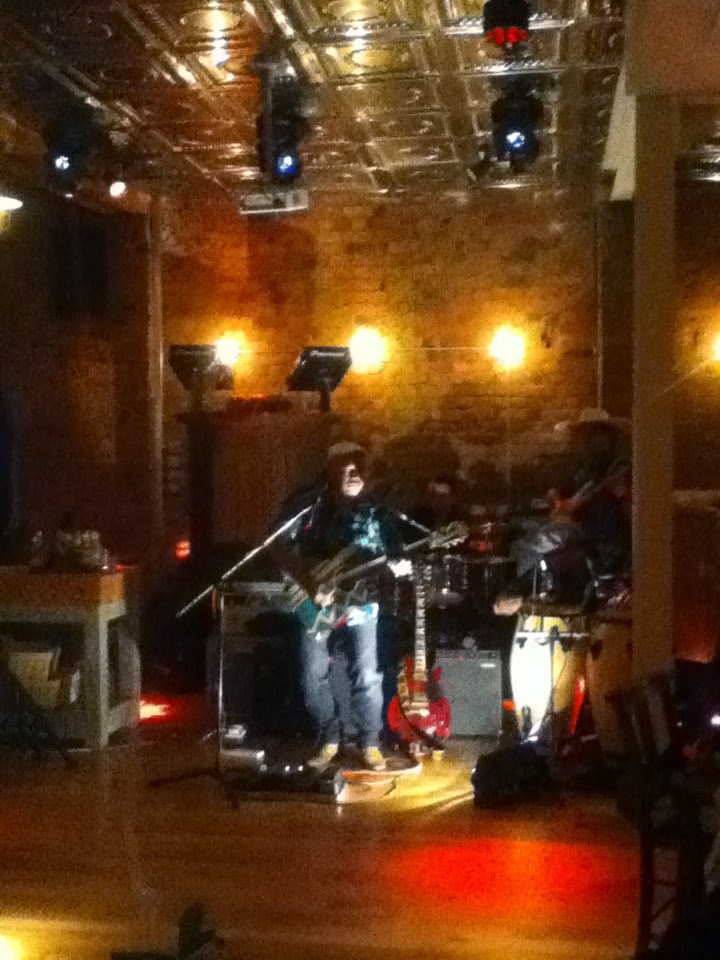 Later on the lights went down and a band started to play – a Cuban funk band called Latino Sound. They were really excellent and it was great that the staff handed around little toy maracas so we could all get down to the beat. I was dancing at my table and was a bit disappointed that nobody else got up to dance as it was pretty infectious stuff. If you get the chance, do look them up. 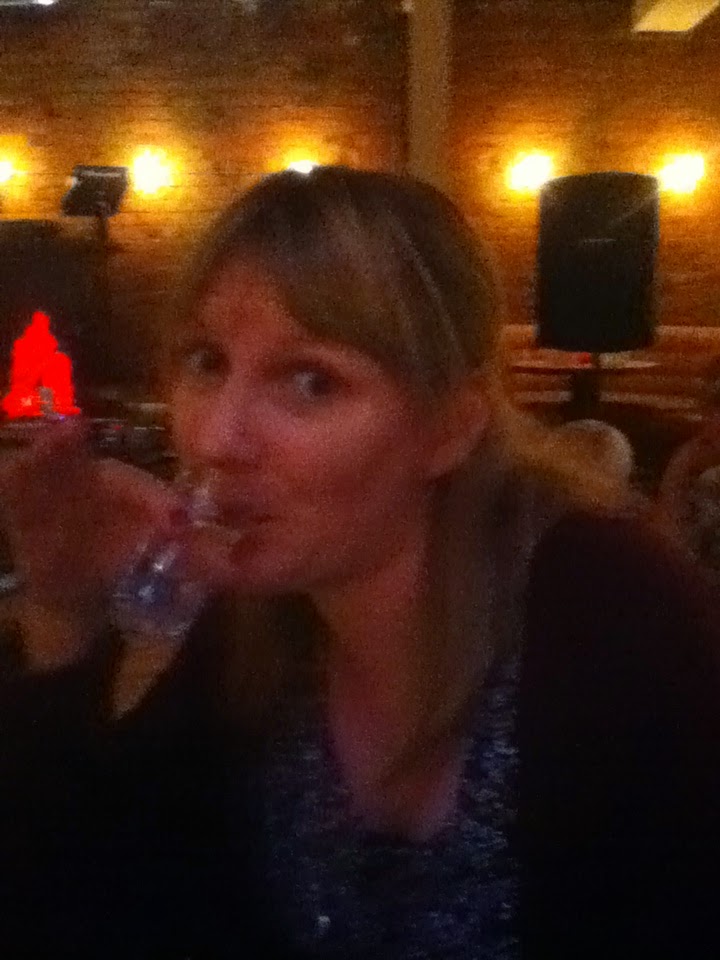 While the band were playing, the chilled out staff brought round samplers to all the tables – sweet shop cocktails with little Maoam sweet decorations, which were really delicious and pretty lethal – you cannot taste the alcohol so watch your step with these little babies! There were also menu samplers – some really delicious, crispy falafel lollipops being the stand out for me.

The new menu is looking pretty cool too. The samples of food we tried that evening was of a really good quality, it tasted fresh made and not too over-complicated. I am looking forward to getting in to the full menu, the old Revolution’s flatbread pizzas were the highlight of the menu and pizzas are back on this one as well as a range of big meals and small plates. Definitely a ‘something for everyone’ menu with no shortage of choice on there. 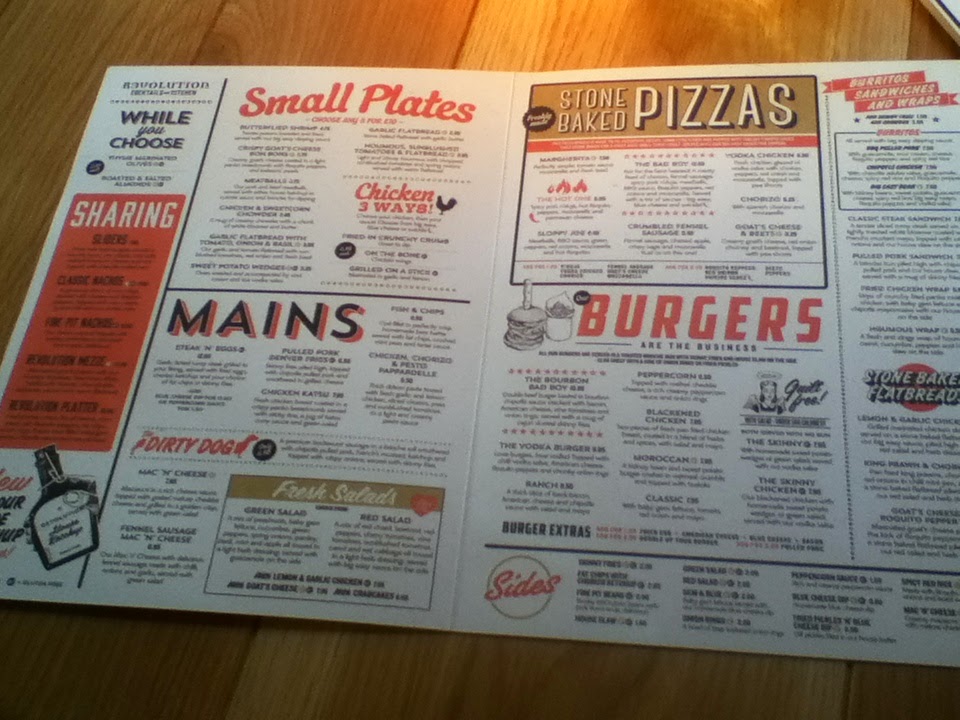 And so to the drinks. As you would expect, they have an excellent range of vodkas – 16 on the menu, with Ciroc and Grey Goose being two that I would particularly recommend. They also offer a range of house flavoured vodkas – there are fruit, sugar & spice and indulgence categories for you to try, which leads to a bewildering variety of shooters available to pick from. Quite a range! On top of that, you can get an excellent variety of nicely made cocktails, a relatively good selection of beer (although we would query the categorization of the ‘craft’ beers and ‘world’ beers – it looked more like Belgian/European beers and a few more interesting world lagers generally speaking) and a really thoroughly decent set of wines including a reasonably priced, but tasty house red. 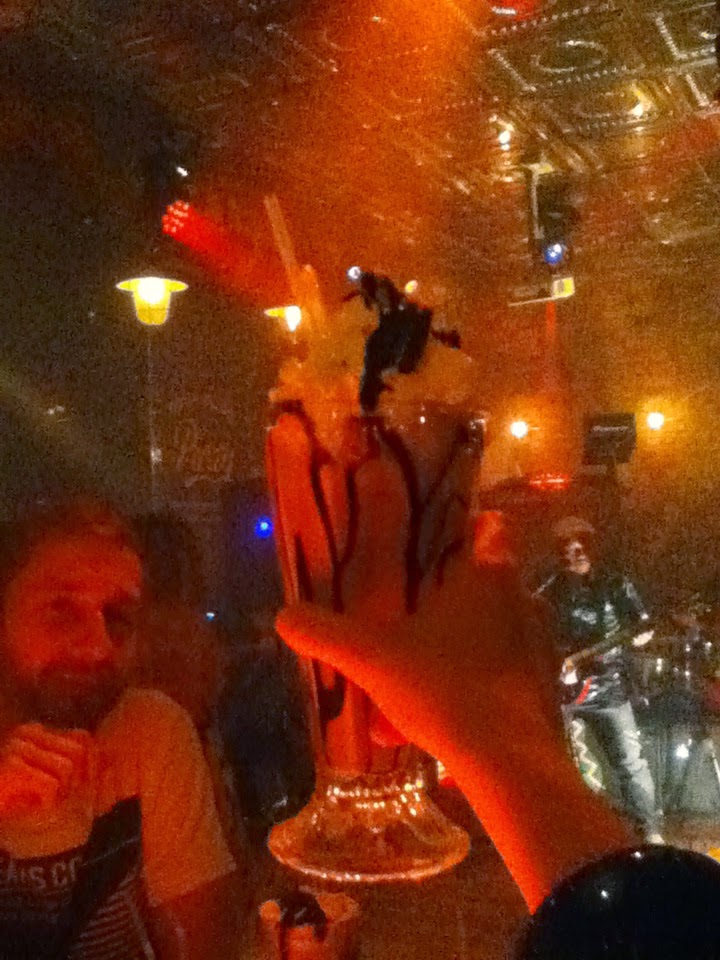 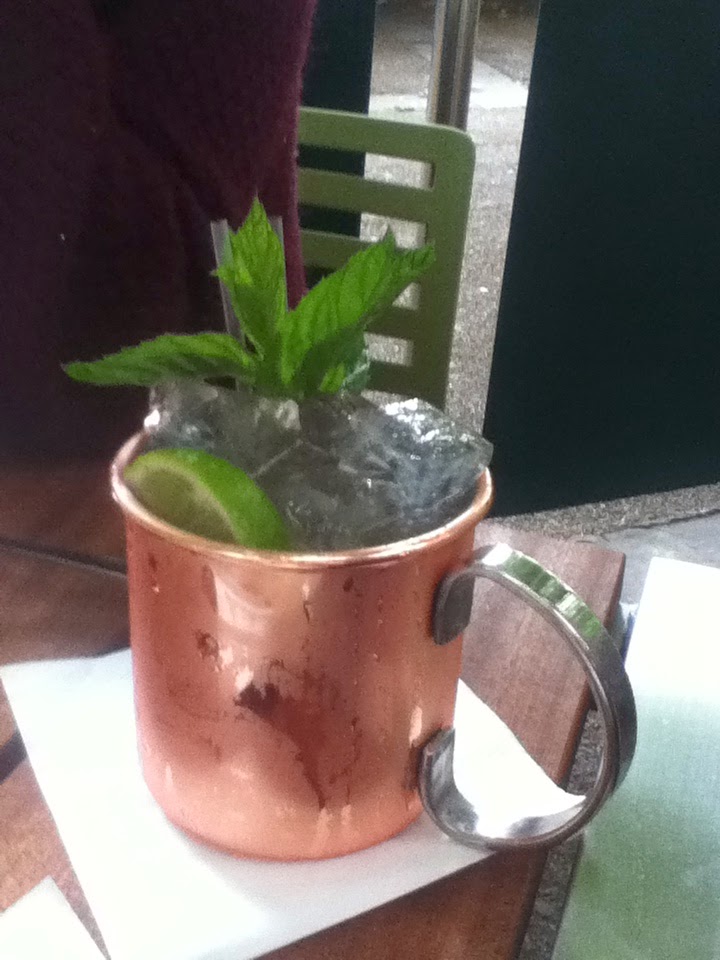 We got in to the cocktails as the band finished, the lights went down further and the flexible venue turned in to its ‘nightclub’ mode. The Moscow Mule in its copper mug was a definite hit with my friends, and the Tennessee Mudshake was absolutely delicious, but in retrospect perhaps a mistake for me to end quite a calorific evening! It was super thick and topped with a tonne of cream and oreo cookies. Delicious, but perhaps one to have in place of dessert!

A great start to a well refurbed old Leicester favourite. A surefire hit with students, Revolution also offers a lot more – we’ll be stopping by again for laid back after work drinks or a cosy dinner stop. I hope the great service is maintained – thanks to all for looking after us so well.