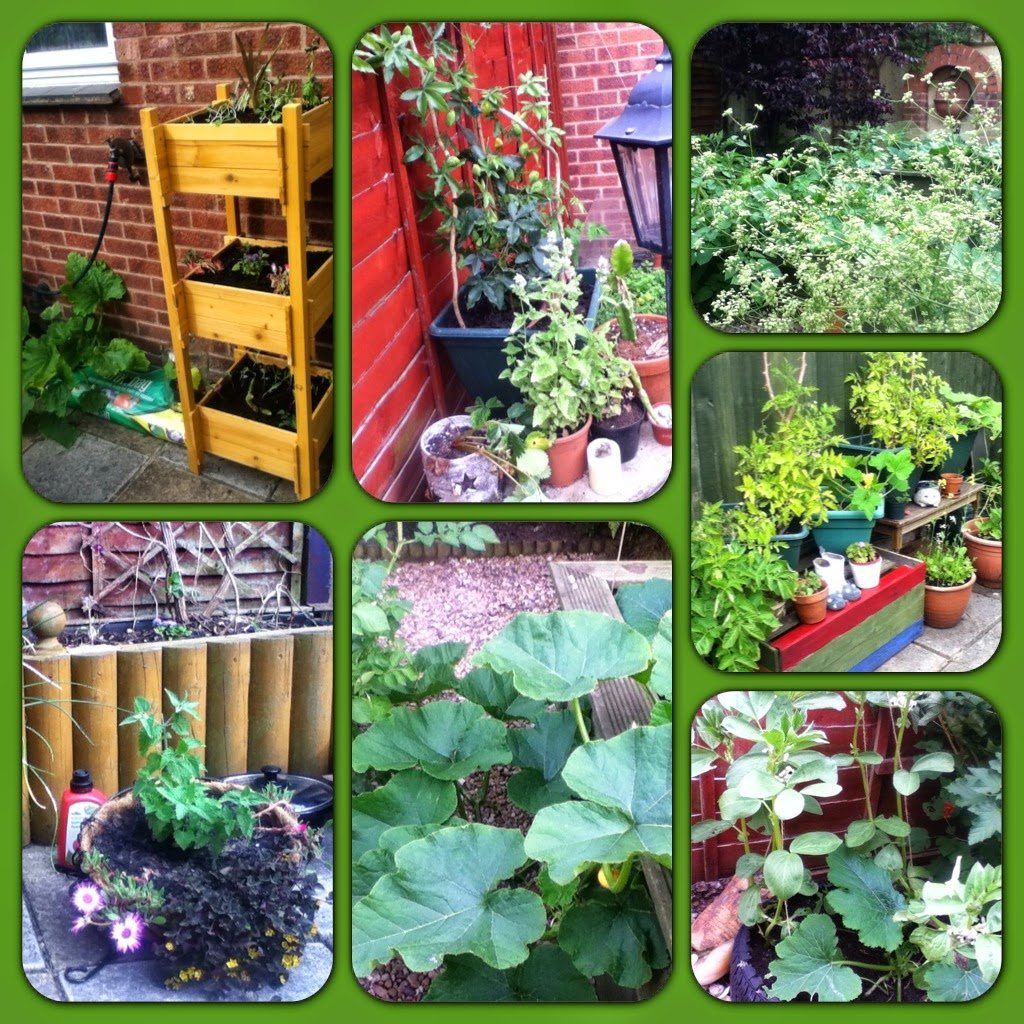 I’ve got a little obsessed with picking up bargains at boot sales and whacking them in the garden recently. It all started when we found a discarded toy dinosaur, whilst walking in the park one day. Naturally, we rehomed him and sat him next to a cactus in the pot. It made him look so cheery that the next time I had the opportunity to buy a little plastic toy at a boot sale I jumped on it, and gradually my collection of bizarre figures and toys in the garden has grown, with famous and anonymous characters alike peeping out behind vast pumpkin leaves, or enacting battle scenes down the trellis. They are still quite subtle, which I like – I don’t think people ever notice them at first, but once they do they start to see them EVERYWHERE. There is even a rubber ducky in with the aubergines out on the drive.
The natural place to take this new craze was to start creating my own custom garden ornaments. I’ve started small, but I hope effective on two little projects this week. The first was a 40p fruit bowl. 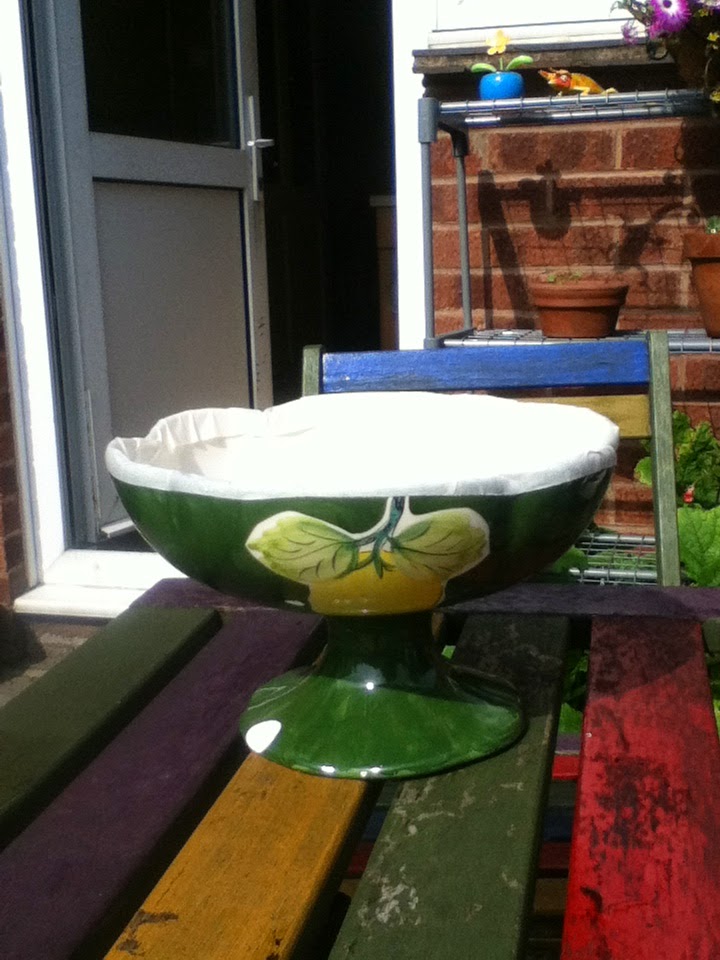 It was a kind of bleurgh colour with stylized lemons on and had a little chip in the base. I simply masked off the top and the bottom in order to keep a little of the uneven green on the border and then sprayed the rest with a blue enamel craft paint which I bought from Wilkinsons. 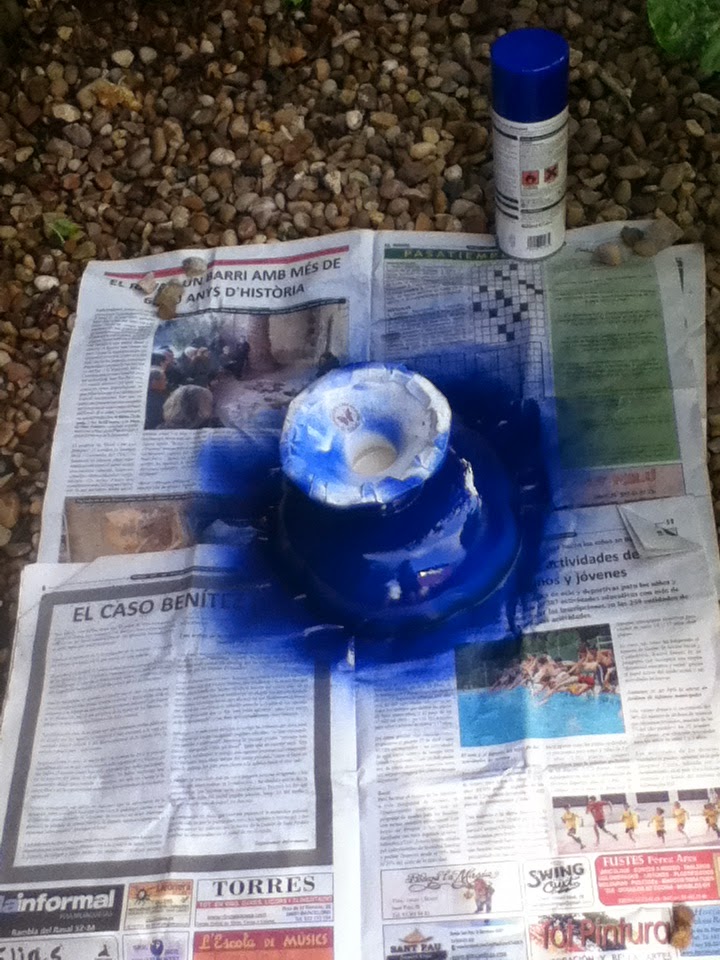 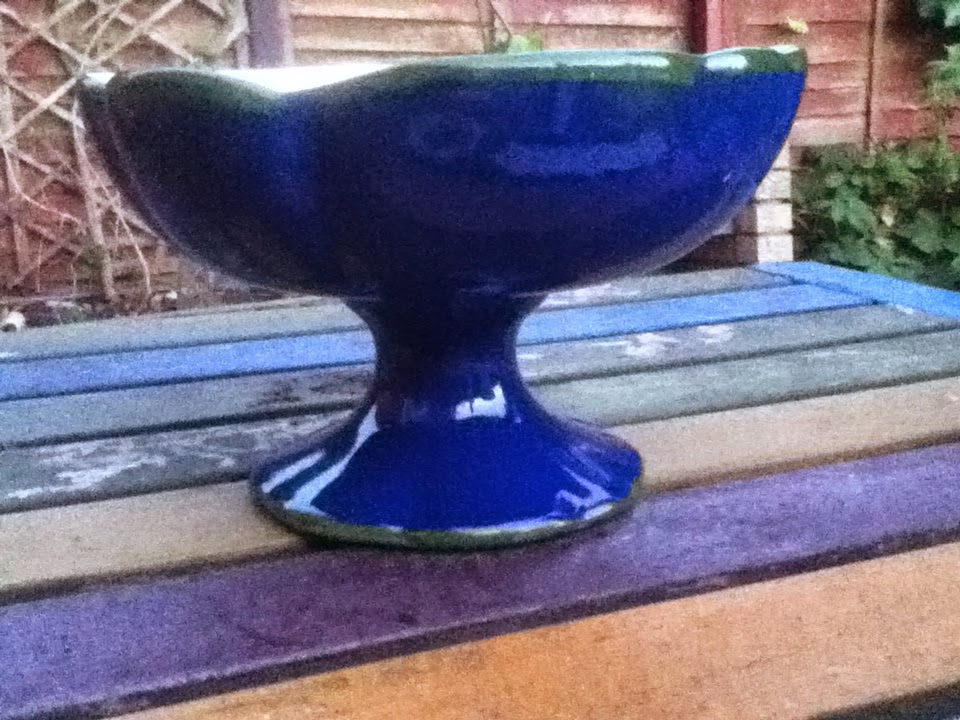 The end result is a shiny, unique bowl which we would like to use as a fruit bowl in the kitchen (our old wooden one is a bit manky and hard to clean, plus I think it would make a good planter, so it’s a fair swap), however it has been commandeered by our kitties as a water bowl. Since we have had nearly three weeks of near continuous beautiful weather now, they are grateful for the addition of a seemingly endless supply of cool water in the garden, on top of the bowls that they have around the house. 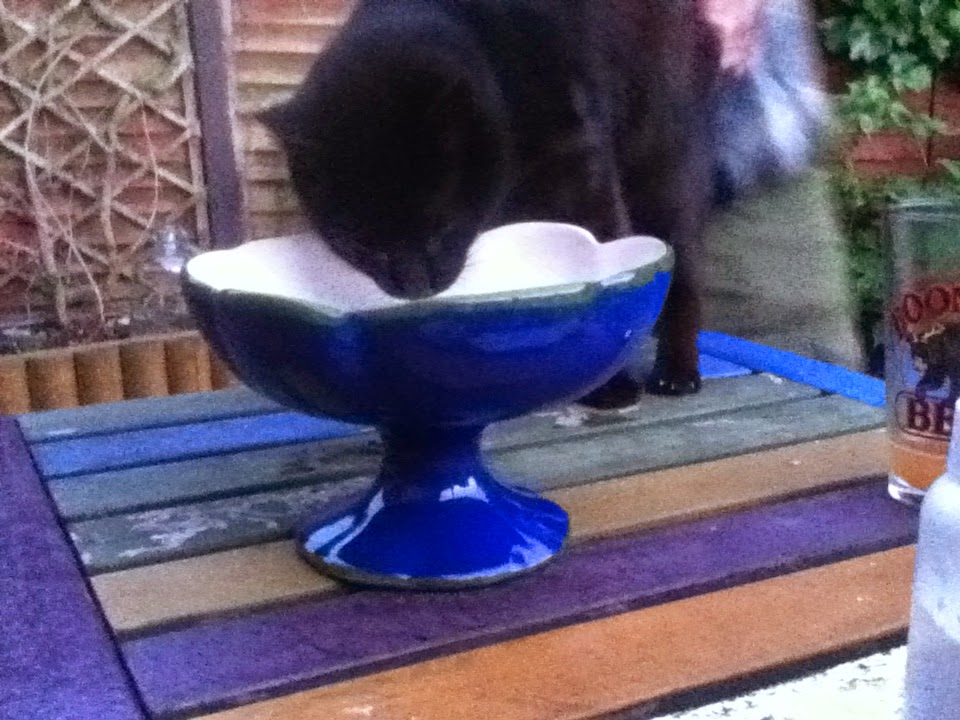 The second project was a cat ornament that I got for 20p. It caught my eye because it actually has slightly more of a degree of realism than your run of the mill garden ornament. I think it was probably made for display in the home, but had been sadly mistreated – with a chipped ear and flaking paint. 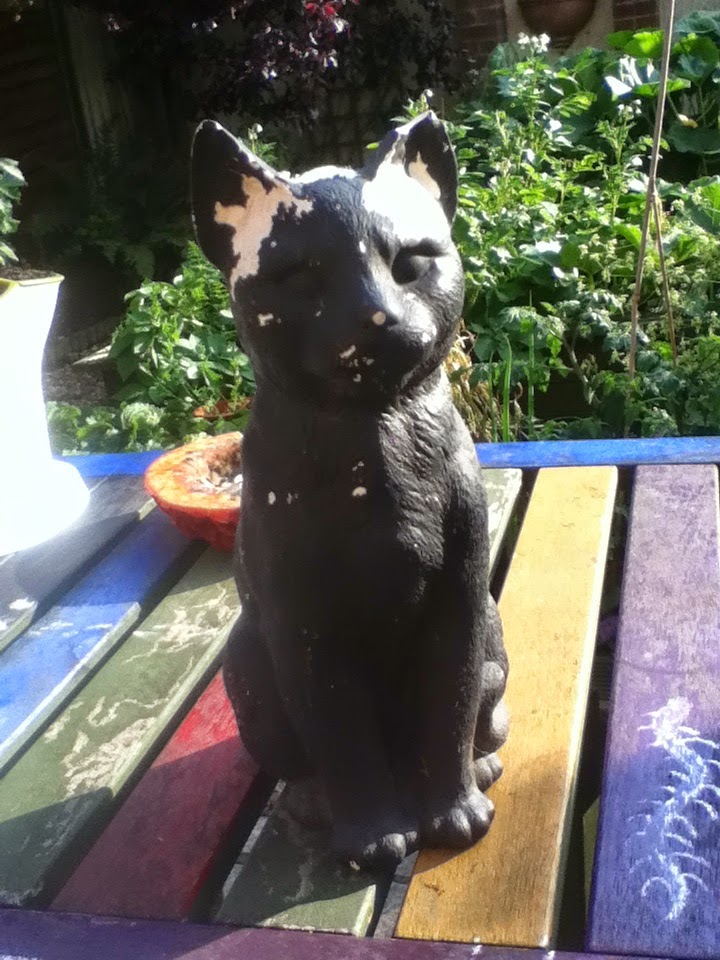 I cleaned him up, removing flaked paint with a hard brush and then attempting to smooth the edges with light sandpaper. It didn’t all come off and this has given him a slightly mottled finish which I really like. This is all part of his story, like the broken ear, which I decided not to fix, although I have a little clay I could use. I think I like that he’s already had a life to live before he came to our house. Having prepared the surface, I painted him with chalkboard paint (which is excellent stuff, I also got mine from Wilkos) and it dried off in record time in summer heat. 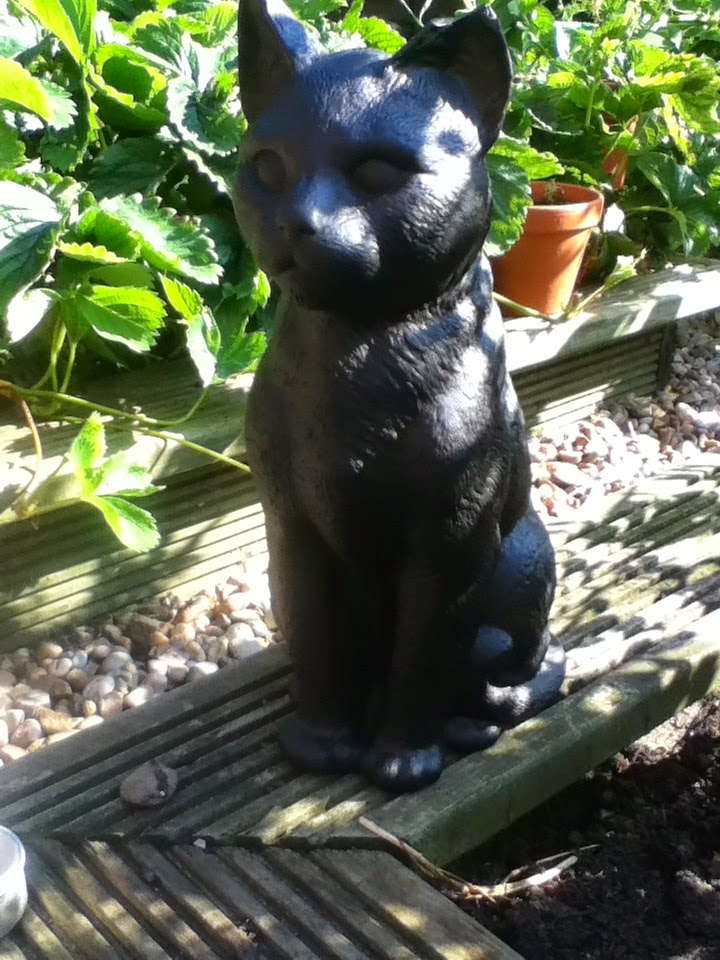 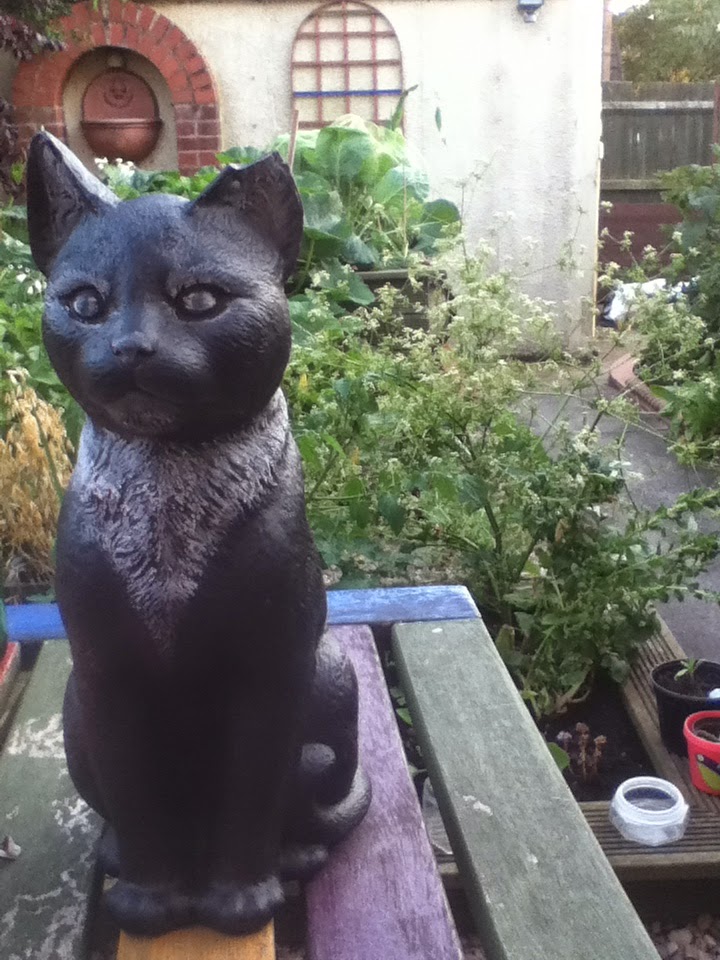 Now I have a lovely ornament, more weatherproof than before, though I suspect he will need bringing in when the frost comes, and I can colour him in whatever fur coat I like – I just hose him down and start again if I fancy a change. Chalkboard paint is absolutely the way forward. I love lazy summer days where we draw patterns and write messages on our painted table, or on our cat. You can also use chalk to brighten up plant pots or your patio – all completely washable, temporary, but lots of fun.