Still learning to sew: The Pincushion

My adventures in sewing, as previewed here, have continued today. We have been sorting the house out after having the loft insulated and what was the music studio now has space for me to do crafting which is awesome and so today I have got back on my sewing machine.

I was tempted to make an effort at a decent pattern, but I realised that I only had 4 pins! After looking everywhere, I couldn’t find any more so I had to ask the Boy to pick some up for me when he nipped to the shop later on and in the meantime I realised that I should do something a bit simpler. This also flagged up that I do not have a decent pin storage device, so it was time to create that most necessary of necessaries – the pin cushion.

I had a little scout round the internet, and decided to have a go at a distinctly amateur version of Celebrate Creativity‘s easy scrap pin cushion. It’s a lovely pattern, but I think us beginners needed a few more photos and detailed instruction – I had to sew up the seams on the top and bottom when I’d sewed all the piece together which led to ‘unsightly’ gathers. Well, it’s all part of the character of the finished piece actually so I’m not that fussed. All credit to Lisa for the pattern – thanks for sharing it. 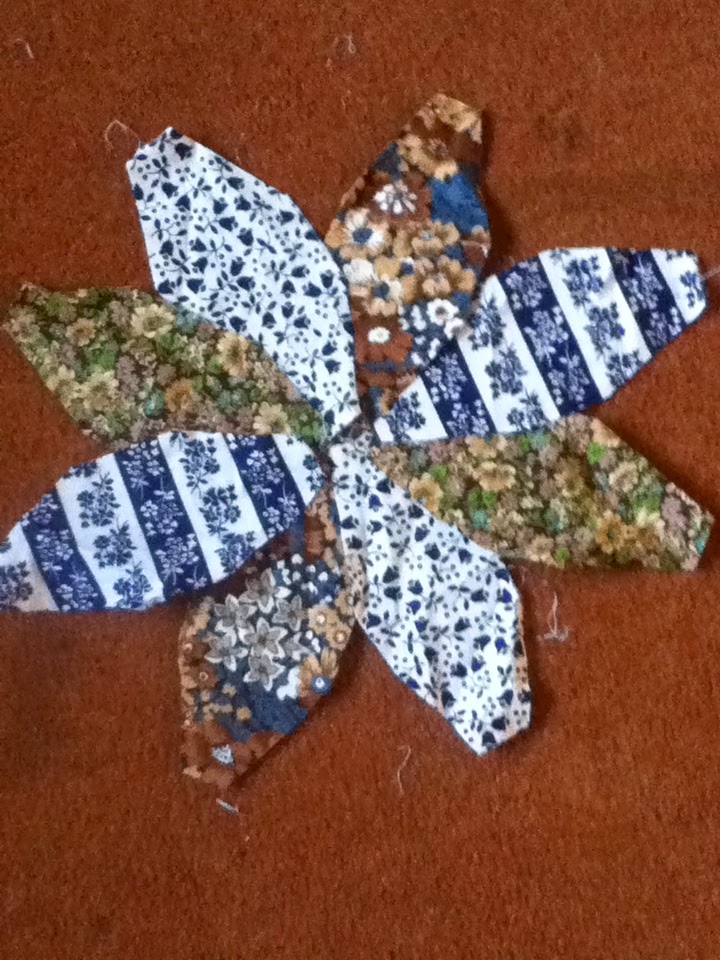 I cut out me pieces as directed. They made a lovely flower which was tres photogenic. 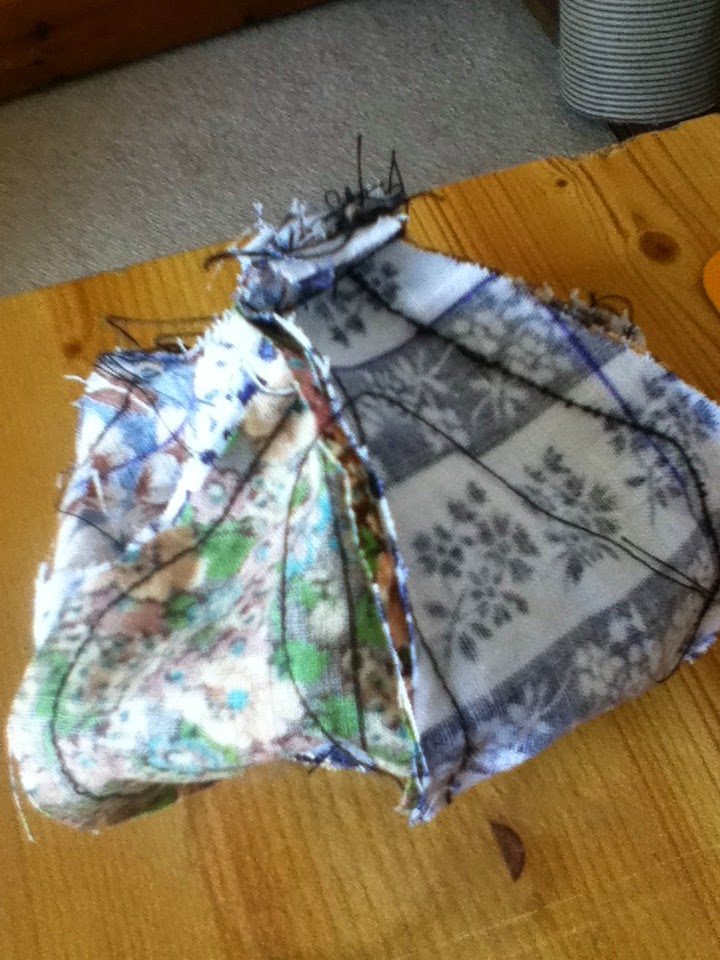 Sew yer bits together. Err… yer pattern pieces. As you can see, I’ve had a bit of a tension issue with one of my bobbins which has plagued me all day. So I’ve showed you the vaguely presentable side. Remember, I’m still learning.

Leave a little gap when you sew it up, so you can turn it the right way round. Or, alternatively, the Extreme Housewifery Patent Method is to sew the whole thing up, realise what you’ve done, swear a bit, then upick a small area for turning. 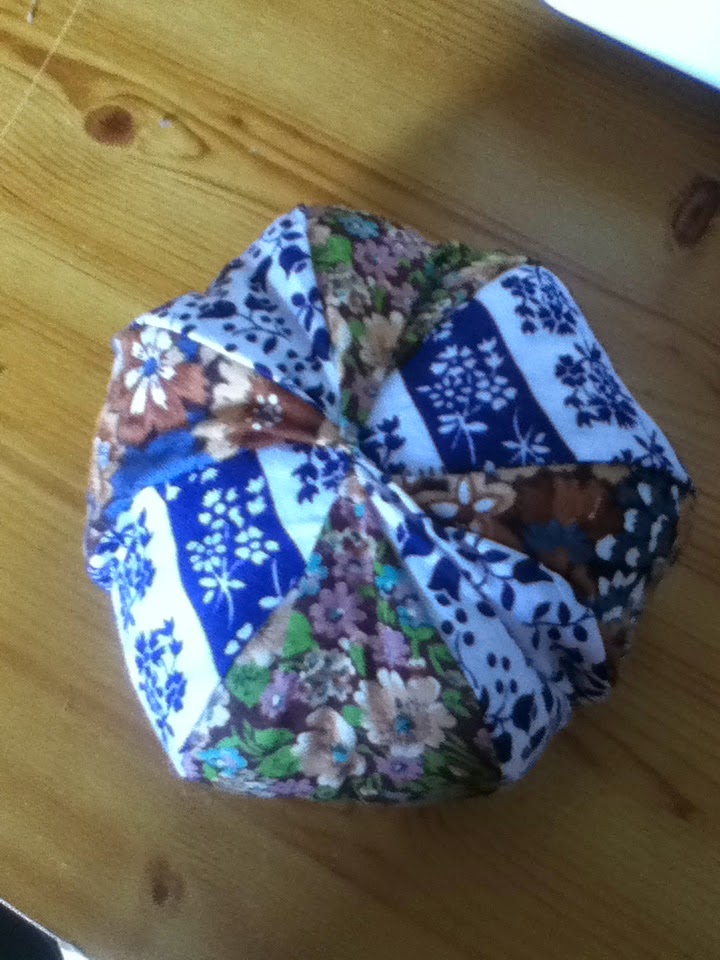 Stuff it and then use an embroidery thread or light yarn to sew the centre, top and bottom together and then run a thread around each of the seams to create a pretty flower shape. Well, a nice blobby thing anyway. To the fab retro fabric which my mum donated to me a few years ago, I added a fab vintage covered button which I got in a 20p jar of buttons at the bootsale the other week. I had been eyeing it up and trying to think of something fabulous to use it for, but I figured I’ll get so much use out of my pin cushion that this is a great way to put it somewhere I will see it loads. Ta da! 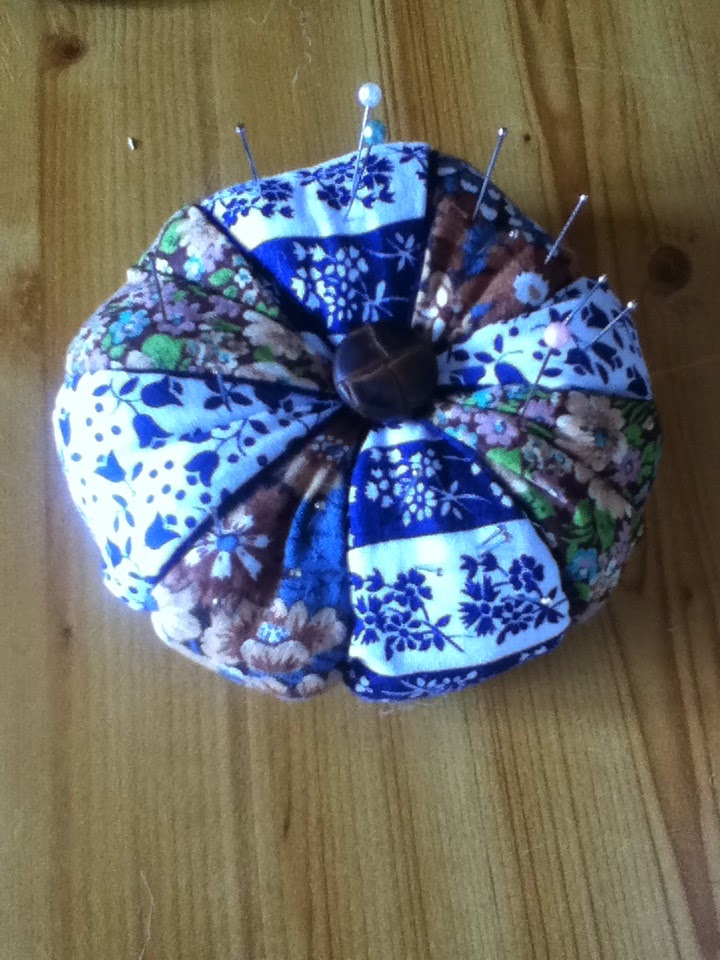 Since I was on a bit of a roll and happy with what I’d produced, I decided to ‘whip up’ (after about 1/2 hour further unecessary tension issues and snapped top threads) a sewing machine cover so that I can look after my kit properly. All credit and thanks for the super simple pattern at Chez Larsson – great, clear instructions. 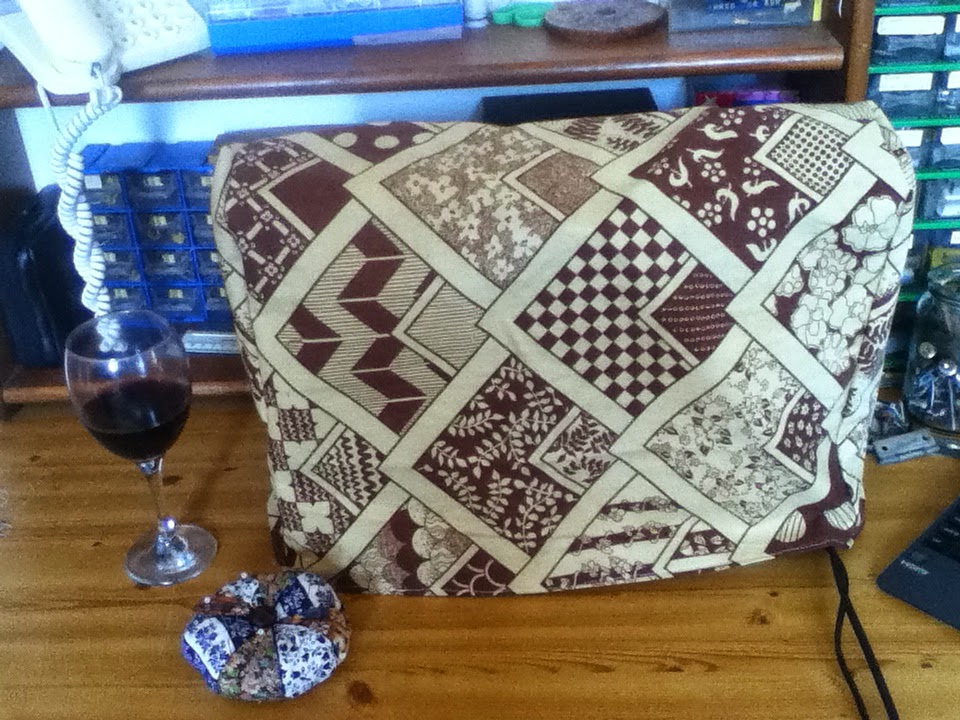